November 11: Surface poses a problem to photography. To look at a photograph is to slip right through, into it. Make a print, project a slide, open it on a computer monitor; there are differences, lighter, darker, more or less detail or range of hue or tone, but where is the photograph itself?

By now any darkroom operator, any expensive inkjet printer owner reading this will be hopping mad; “…of course there’s a difference! I sweat on the difference, finessing every print I make! Look at the richness of those blacks the selenium toner adds, see the colour gamut and DMax that I get with 10 colour inks from my Epson SureColor printer…c’mon,  it cost me ten grand!”

Let’s forget for the moment the various supports on which a photographic image is presented – that’s printmaking – and instead, ask; “what is the image?”

We rely on light to make our images of course, and that definition of the medium is encapsulated in its name photo-graphy to which there are two parts; light and image-making. We may describe the photogram, made with shadows and light on a light-sensitive surface as a photograph.

It’s a conundrum that goes right back. Artist Cornelia Parker (*1956) opened just yesterday an exhibition of her One Day This Glass Will Break (2015), amongst other work, which continues until 9th December 2017.

The venue for Parker’s show, the London Print Studio, is significant; not a photography gallery but one dedicated to printmaking. The eight works on view are not conventional photographic prints but arose from Parker’s investigations into photogravure, a photomechanical process which produces an image in ink through the exposure of a photographic positive onto a copper printing plate which is then printed like any other engraving. By using as subject matter the ‘articles of glass’ that he photographed for The Pencil of Nature, she makes reference to William Henry Fox Talbot’s early solar prints (photograms) and photogravure, his invention for printing photographs with ink that he hoped would simplify their mass publication (though it was a long time before they could be printed alongside and at the same time as type as he’d hoped). The quality of photogravure is excellent, as demonstrated by Alfred Stieglitz’s firm belief that, when  tipped-in to his superb publication Camera Work, they were equivalents of the photographers’ original platinum or gum-bichromate prints.

But before the the various forms and different media of light-sensitive materials which permit the recording, comes the image, projected by a lens, as simply, and as incidentally, as this image of our bay windows being projected by a water-filled wine glass onto the wall a few centimetres away.

Out walking in the bush this afternoon I noticed a feather suspended between tree trunks on invisible strands of spider’s web, and asked myself; “What if the wall were not there?” We still have an image hanging in space; it is a cone of projected light containing the image itself as a transparent volume without mass that may be sampled, with a white card, at different distances from the lens.

We discover, close to the lens, projections of any object at a distance from it, and  by sampling further in the space behind the lens we detect imagery of anything closer to the lens.

Let us then, for the sake of examining work by two currently exhibiting Canadian artists, adopt the notion that the lens image is the photograph.

Nizam is both a sculptor and photographer whose interest is;

in the nature of photography […] rather than placing emphasis on the end result, or image, [I] generate meaning somewhere else within the photographic act.

As the gallery currently is being mysterious about the content of his show, displaying only one of his new works on its website (multimedia sound and light pieces), let’s look instead to earlier work which will suffice to understand what Nizam means by that statement.

Thought form (Cube) is both a ‘photographic act’ and an end result (a silver gelatin print from a large format negative). The ‘action’ is more involved and required a daunting amount of preparation. Like Gordon Matta-Clark (famous for his chainsaw-powered ‘building cuts’), Nizam used abandoned houses as his ‘studio’. These were close neighbours of his home in Delta, Vancouver, which he accessed by negotiating with the local government. In interview with BJP he says that for Thought Forms he covered the windows and cut a small hole through which sunlight could enter the room;

The challenge was building three-dimensional illusions in isometric projection and fitting them into anamorphic perspective from the point of view of the camera. I was thinking about alternating perspective figures such as Schroder’s reversible staircase as well as the geometric abstractions in Alber’s Structural Constellations. I thumb-nailed hundreds of forms and chose a few that best pushed the visual illusion of simultaneously receding, projecting and remaining flat in space.

The light beam could be bounced about five times before it lost sufficient power, but by using multiple, and different lengths of exposure, he could adjust.

For the Shard of Light image, he cut a narrow slit from floor to ceiling through the main room of a house, and diagonal!y across the ceiling from the corner for several feet; at midday the sun moved into alignment with the cut, concentrating a perfect shard of light that he documented with a large format camera. Given the speed with which he had to work to make the line-segment images as the sun moved, he switched from sheet-film to T-Max 400 roll-film in his Mamiya RZ67.

These works have been followed up with numbers of other experiments using the passage of sunlight. In the case of the 2016 Sunrise and Sunset it traces its own track across the sky in an image projected from a pinhole into rooms facing west and east which Nizam records with a large format camera, in the manner of Abelardo Morel‘s ‘rooms with a view’. 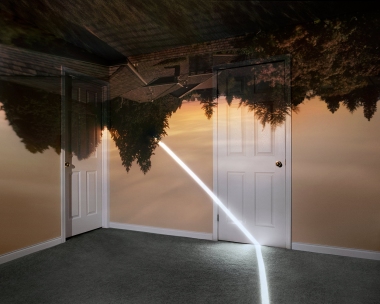 Frieze, also from last year, entails the use of multiple exposures on the same sheet of film to record the sun’s arc across the sky.

In considering photography and its support, its surface, as a skin, Marina Black in her work has an emotional and narrative purpose. In contrast to Nizam’s, Black’s imagery is, like her own name, dark and subterranean; in 2012 she showed 14 m to the daylight surface at Izolyatsia: Platform for Cultural Initiatives in Donetsk in the Ukraine. Her imagery before and since then is also submerged in personal doubt and a questioning of the purpose of existence.

…it is hard for one to assess oneself. It is a hardship not only prompted by the immodesty of the enterprise, but because one is incapable of understanding [oneself] fully. However, if I were to summarize, my main interest…is the nature of time. What can time do to a person?

Her imagery builds on the idea that the negative emulsion is a kind of dermis and therefore a fitting metaphor for human suffering, loss and death. Black uses stained films, blurred exposures, cutting and collaging techniques, and juxtaposes images with handwritten texts, to question mortality.

Skin, above, as an example has been made, I assume, by asking the subject to press themselves hard against glass, creasing and distending their flesh. From the other side, Black is photographing (alternatively she may have rephotographed photocopies or scans, enhancing the contrast).

The negative is deliberately pierced and scratched before printing, making us aware of the fragility of photographic emulsion and its tissue, torn as easily as skin by thorns, of which she makes us doubly aware in her montages by improvising the ‘mending’, stapling and suturing of the cut-up film.

The results are both awful and beautiful. She points out that French philosopher Julia Kristeva addressed the question of whether beauty and death are facets of the same experience, or opposites, and concluded that the creation and appreciation of beauty springs from a sublimation of grief;

Is beauty inseparable from the ephemeral and hence from mourning? Beauty represents an artificial imaginary conquering of death that allows life to continue. (Kristeva in Vanitas: Meditations on Life and Death in Contemporary Art)

For both artists the photograph is a luminous, and in Black’s case, a numinous, entity created for one by light, and for the other, by its absence.

One thought on “November 11: Surface”