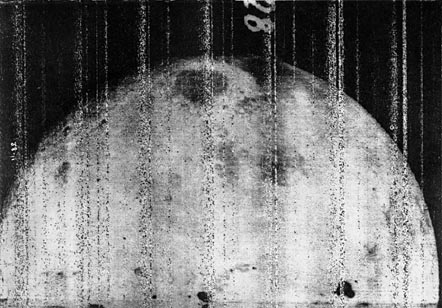 October 7 1959 marks the day that one of humanity’s great mysteries was lifted; we saw what lies on the other side of the Moon.

What was remarkable was that in the thick of the Cold War, it was the Russians and not their American rivals who performed this extraordinary feat, seemly impossible in the context of 1959 technology and a mere two years, almost to the day, of having launched Sputnik 1.

The pictures had to be taken on photographic film, automatically developed in a mini-photo-lab in space, and then scanned and transmitted back to Earth!

Film was chosen for its superior resolution and fast recording and an emulsion selected that could be developed at any temperature.

Video, which was low in resolution, was used only later on the 1960 Vostok missions when 400 line television system had been developed.  Videcon television tubes were notoriously unreliable, with pincushion distortion and very slow to capture images, and would have to have scanned the fast-moving scene, resulting in distortion.

The enormous amount of visual information that could be stored on a roll of film could be repeatedly rewound and scanned at whatever rate was convenient for telemetry transmission. The American Lunar Orbiter missions adopted the same strategy six years later.

The Russian Luna 3 was launched on a Luna 8K72 (number I1-8) rocket over the North Pole to put Luna 3 on its course to the Moon, however the signal from the space probe was only about half as strong as expected, so the spacecraft spin axis was reoriented and some equipment was shut down to drop the temperature inside from 40°C to a more workable  30°C. When 60,000 to 70,000 km from the Moon, the orientation system was turned on and the spacecraft rotation was stopped. The lower end of the craft was pointed at the Sun, which was shining on the far side of the Moon. 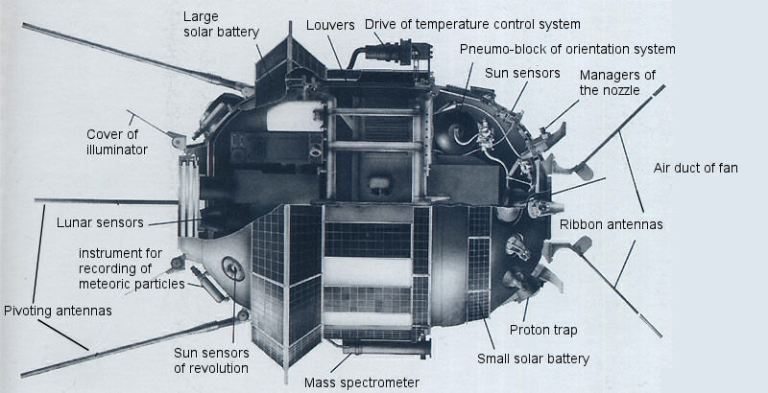 At 14:16 UT on 6 October 1959, the space probe passed within 6,200 km of the Moon near its south pole at the closest lunar approach , and continued on over the far side. On 7 October, the photocell on the upper end of the space probe detected the sunlit far side of the Moon, and the photography sequence was started with a total of 29 pictures taken, covering 70% of the far side.. The first picture was taken at 03:30 UT at a distance of 63,500 km from the Moon, and the last picture was taken 40 minutes later from a distance of 66,700 km.

After several attempts to transmit the images it was only on October 18 that images were received, then all contact with the probe was lost on 22 October 1959. The USSR hastened to produce the first atlas of the far side of the Moon, was published by the USSR Academy of Sciences on November 6, 1960

As the craft was not returned to Earth the only record of these first images of the far side are the video transmissions, marred by streaks of noise caused by drop-outs in signal.

For those outside Russia, the imagery was further degraded in some newspapers relying on wire photos involving further scanning and transmission. 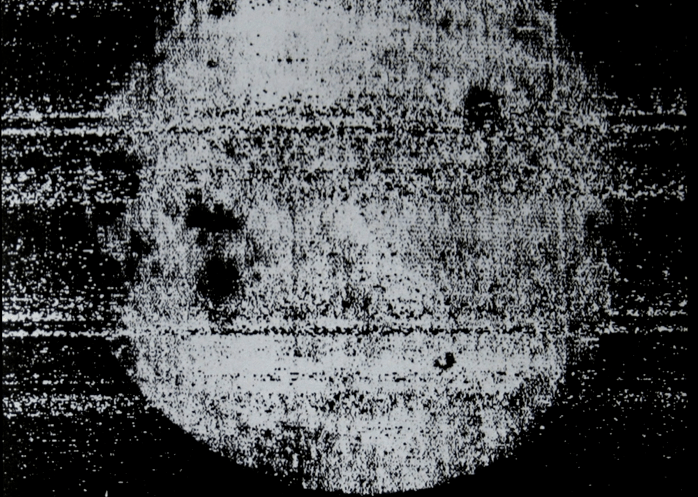 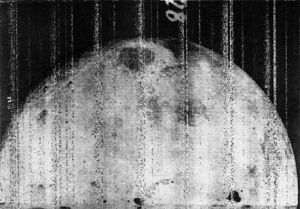 The photographs were taken with the Sun behind the craft and so are flatly lit, giving little surface relief. Nevertheless, they were an astounding revelation; the so-called Dark Side (not actually dark, but unseen), was devoid of the dark ‘mares’ or ‘seas’ seen on the near side. Why? The far side crust is 80 km thick but 60 km deep on the near side, so magma may have been prevented from reaching and flooding the surface as they did on the near side (the Mares). The asymmetry may be due to the slowing of the moon’s rotation into its present tidally-locked state with the Earth.

Luna 3 was one of a number of Russian coups early in the ‘space race’; including the first flyby (Luna 1), first surface impact (Luna 2), first soft landing (Luna 9) and first lunar orbiter (Luna 10). Although the United States eventually won the race to land a human being on the moon, it was 7 years before the American’s unmanned Lunar Orbiter program was launched by NASA from 1966 to 1967. That produced the first detailed mapping survey of the far side, most of which was provided by the final probe in the series, Lunar Orbiter 5.

NASA’s Apollo astronauts were only to see and photograph the far side of the Moon 9 years after Luna 3 during the Apollo 8 mission in 1968. Astronaut William Anders (*1933) radioed back about what he saw:

The backside looks like a sand pile my kids have played in for some time. It’s all beat up, no definition, just a lot of bumps and holes.

The entire ingenious, expensive exercise had as its goal to make a photograph of the unseen; a trophy in the Cold War, one that brought knowledge, but which came arguably at the price of the mystique of the Moon and its symbolic value, reduced to a ‘sand-pit’.

One thought on “October 7: Luna”