May 4: Aggravation and the aggrieved are the topics of a wide-angle view of conflict in a new exhibition.

Images of conflict are, regrettably, as topical now as ever, with Military Review magazine having just published the last photograph taken by US army camerawoman Hilda Clayton. Her camera captured the instant that a mortar being loaded prior to firing jammed and exploded, killing and three Afghan National Army soldiers on July 2, 2013. The magazine also published an image captured at the same moment by an Afghan soldier whom Specialist Clayton was training in photography. The photographs were released after permission was granted by Clayton’s family.

The Recount of Conflict hugely broadens the concept and the scope beyond the military to examine some underlying causes and aggravations. The show includes Anna Ehrenstein, Demetris Koilalous, Jasper Bastian, Marcus Haydock, Mark McGuinness, Martin von den Driesch, and Sascha Richter, who all focus on the disruption of everyday lives caused by conflict.

UK photographer Marcus Haydock‘s Domestic Violence series shows us the violence of war as we in the First World receive it: in our homes. Each image is vivid with the raw, raking electronic raster of the television screen which enlarges video beyond its capacity to define detail from these scenes from the battlefield. The images, made during the first three weeks of March 2003 of the conflict in Iraq, were shot straight from TV news channels in Haydock’s living room.

Elsewhere in his practice Haydock is just as omnivorous, drawing visceral, keenly emotional imagery from such sources as the negatives left in a school darkroom by teenage photographers who may have had no idea of the astonishing quality of their own work, or the copies he makes of magazine pages folded to transport cocaine or MDMA.

One might be forgiven for mistaking at a glance this image for a study for Constable’s The Hay Wain of 200 years ago with the cyclist standing in for the wagon and for its similar composition and mood. But this is not the bucolic River Stour. It is the river Ibar that runs through and divides the former country of Yugoslavia.

Jasper Bastian has over a sustained period been adding to his series Across the River on the divided city of Mitrovica, in the northern section of Kosovo. Once one of the wealthiest areas of Yugoslavia, the struggling city is now split in two because of ethnic tensions, political upheaval and painful memories of the Kosovo War of 1998–99  that was part of the wider regional Yugoslav Wars. South Mitrovica belongs to the independent state of Kosovo while North Mitrovica is allegiant to Serbia. The river that runs through the centre is  both physical and ideological barrier.

For Demetris Koilalous (*1962, Athens) it is the migrants who have entered Greece after crossing the Aegean Sea on their way to Europe who constitute his Caesura. Severed from their homelands by war, they are human ‘collateral’ who challenge the values of those amongst whom they land, those who are at peace and who consider themselves distant from conflict. Above all, Koilalous’ square-format, matter-of-fact imagery reinforces the knowledge that these are people ‘just like us’ who have made landfall in what is for them is place which promises peace and freedom but which also is an alien, intransigeant landscape.

Sascha Richter (*1987, Berlin) makes black and white imagery that starkly reinforces Serbia’s refusal and violent rejection of Afghan migrants in his We Are Like Ghosts, who live in a no-mans-land in an abandoned train depot and nearby barracks, next to the main train station in Belgrade.

To avoid the smoke of fires kept burning inside the ramshackle, abandoned buildings for warmth and for cooking, these refugees sleep outside on the platform beneath a brick-patterned security shutter, graffito pleading for help and an official notice prohibiting photography.

Mark McGuinness is making a photographic pilgrimage across the entire Shia crescent, carrying a copy of Kahil Gibran ‘for guidance’ and using his Instagram account to broadcast some of his images. His Dreaming of Figure Eights represents the sense of uncertainty, helplessness and confinement of those in South Lebanon, ordinary people caught up in ongoing aggression from both Israel and the Western powers and extremist fundamentalists.

Martin von den Driesch (*1968, Germany) has also photographed the refugee crisis and has ventured into North Korea. He is a is a commercial photographer with a long list of corporate and media clients, and it is no doubt these contacts that have given him entree into the International Defence Exhibition (IDEX) in Abu Dhabi, a trade show for arms manufacturers who supply and profit conflicts in what is really a continuing third world war.

Just like any trade fair this one is crowded with businesses presenting their wares in a hermetic environment sanitised of any possible political or moral infection. His work is succinct and critical and clearly not the product of a whim; he has been making images of the root of conflict for many years, and he does not list any arms dealers amongst his clientele.

Idex is one of the world’s biggest arms fairs aimed at high-level representatives from government, military and industry, although other groups of people are given access, including school students taken on excursions.

Angel Luis González, PhotoIreland Foundation Director, is the curator of this group exhibition whose inclusion of Anna Ehrenstein‘s Tales of Lipstick and Virtue endorses a still broader view of the causes of conflict.

Ehrenstein photographs Albanian women who aspire to wealth and celebrity, or at least to clutch at those empty trophies of capitalism. Her imagery is appropriately kitsch in its presentation of a pathetic consumerism of patently fake ‘luxury’ goods whose only value is a brand name. 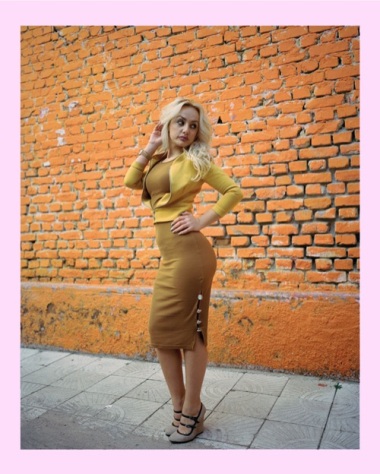 Intermingled with the work of the other exhibitors these are the most unsettling. They reveal where the value judgements that drive our conflicts are awry. Albania serves as a prime example; a country that threw off Communism only to embrace a berserk form of capitalism that saw widespread corruption, scams, bankruptcies, revolt and disintegration before relative stability returned and Albania became a candidate for inclusion in the EU.

Not included in the exhibition is Ehrenstein’s Authority Can Appear As A Cosmic Nebula in which sheets of 4×5 negative film was exposed to the electric shock of a Taser X26, which is used for ‘enforcement’ around the world. As a representation of a physical  puncture they are as searing, like an exploding mortar.