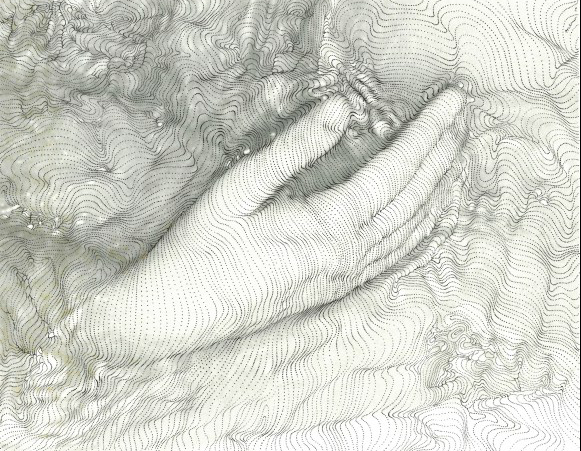 May 3: Drawing on photography; embroidering the facts?

Bremer uses a hybrid of drawing and photography that is not unlike the process of making engravings from photographs, the method used to translate the new medium into printable form in the nineteenth century.

This use of engraving started in the very same year as the inventions of photography were announced, when Dr. Golding Bird’s A Treatise on Photogenic Drawing was illustrated with an engraving from a photogram of fern leaves in the educational publication The Mirror of Literature, Amusement and Instruction on April 20, in 1839.

Earlier still, Nicéphore Niépce had begun his first experiments in photography by copying the sharply-formed marks of engravings, and had ambitions to print from the pewter plates on which he was making his photographs.

Should we accuse Bremer (see right) of deliberate forgetfulness of this history?

Engraved copies were the only feasible means of photography presenting itself publicly before the advent of half-tone printing, which has since then surmounted the problem of converting continuous-tone photographs for printing with ink. The alternative, heliogravure, which was Niépce’s aim and also invented by Henry Fox Talbot, did not become practical until 1878 when Czech painter Karel Klíč improved on Talbot’s research to produce the Talbot-Klič photogravure process still in use today, which produces superb continuous-tone renderings from etchings made from photographs exposed onto an acid-resistant tissue.

Even still, inventions for making engravings automatically from photographs persist in being announced; such is the attraction of engraving, especially its use in security in printing bank notes and bonds as demonstrated in a recent exhibition Images of Value: The Artwork Behind U.S. Security Engraving, 1830s–1980s at the Grolier Club (47 E 60th Street, Upper East Side, Manhattan) which closed on April 29.

An example of this ongoing interest in making engraved images as a security measure is US Patent US5329381 A of May 1996 in which “a picture is engraved by a graving tool in response a picture signal that is picked up when an original picture is scanned”. However the ease and availability of such mechanised outputs are one of the reasons that engraving is being replaced by other security measures!

To look at the detail of an engraving is to appreciate the labour and skill entailed in the craft, as Diderot’s illustration, an engraving of an engraver making an engraving, shows! The burin scrapes fine lines in the surface of the plate rendering steps of tone and shadow in serried lines, hatchings and stipples.

These are the skills that Sebastiaan Bremer has been applying in making his imagery as it has evolved through a series of exhibitions at Edwynn Houk Gallery, the most recent of which, ALTERED: Appropriation & Photography, May 7 – August 8, 2014 teamed him with Robert Heinecken, Lalla Essaydi and Vik Muniz at Edwynn Houk’s New York space.

Is it sheer anachronistic folly that he persists with this labour? He explains;

I knew that this form of mark-making wasn’t invented by me and that these obsessions and desires were not unique to me. Looking further, to see how so many artists have been obsessing about the same ideas, and wrestling with the same problem of how to carve one’s place in time, gave me a feeling of going home.

Clearly his statement expresses what more there is to his art than mere technique. This new show draws on an intimate, formative episode his life. His press release tells us that 23 years ago when he was 23 years old and moving to New York, he met and fell in love with Andrea Lerner (the Brazilian choreographer and half of the duo  ‘chameckilerner‘, with Rosane Chamecki).

As a young lover might, he made a series of photographs of her in the bath in his apartment, no doubt still thrilling with the intimacy that would allow him such liberty. She in turn looks back at him in these faint images with indulgence, sharing a touch of exhibitonism, voluptuously luxuriating in and returning his infatuation.

Sebastiaan Bremer (*1970, The Netherlands) lives and works in New York and studied at the Vrije Academie, The Hague, and then at the Skowhegan School of Art and Sculpture in Maine where, in 1998, he began to apply pointillist and linear patterns to enlarged copies drawn directly on photographs found either in family photographs or amongst those taken by him. An earlier series, for example, embellishes snapshots that include a best friend from Bremer’s teenage years who, still yet quite young, tragically killed himself. 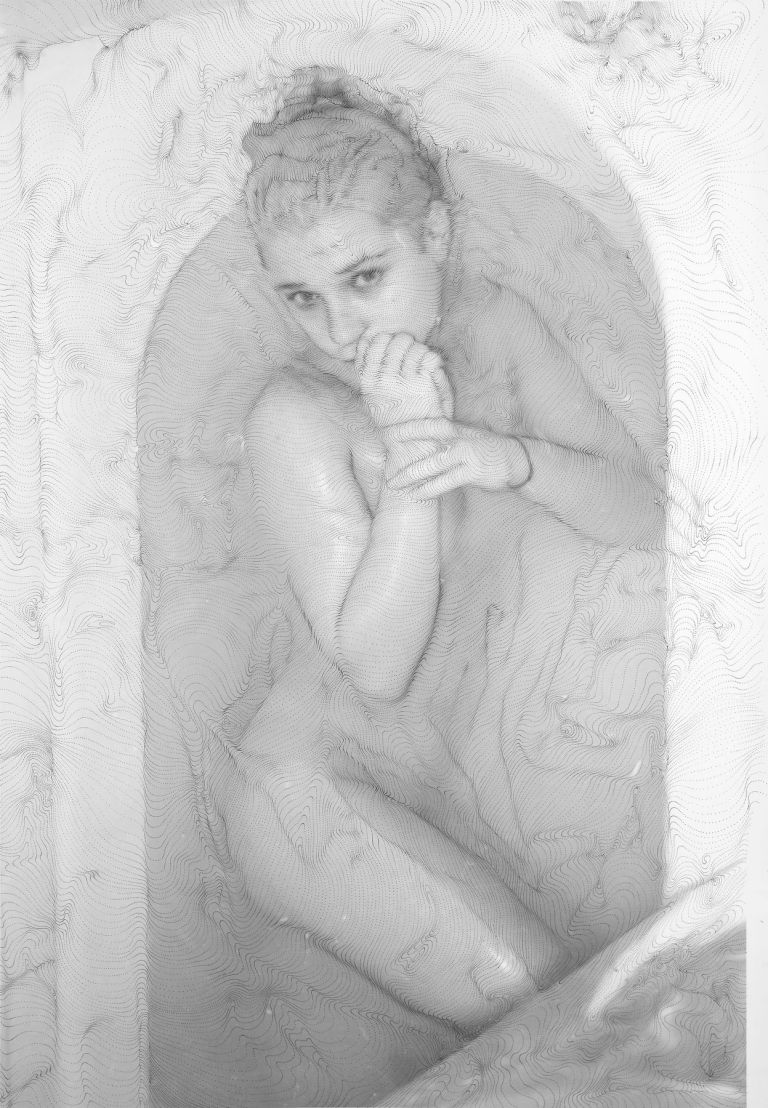 Bremer prints his photographs faintly, softly, on matte paper. As a result they remain a mere trace beneath the drawing, providing the guidance of a gentle gradation for the fine stippling made with pen over the surface.

One might compare the application of dots to those of the tattooist’s needle, but they do not piece the membrane of the photographic emulsion; instead they are a tender poring-over, a re-touching caress of a treasured historical trace.

To compare Bremer’s mark-making with that of the burin in traditional steel or wood engraving (left) is to realise that where that is a straightforward reproductive craft, his is innovative and creative. While a range of marks are made by the engraver’s tool, they are systematic and based on the constituent patterns of the material textures they depict; waving lines for hair, finely modulated, stochastic stipple for the skin, eyes and eyebrows and thick contours intersected with fine crosshatching for the corduroy of his uniform, contour line on the embroidered wreath of the collar, and tight circles tracing the cloth-covoured button.

Bremer’s dots instead meander to a different current, an emotional one that is like the embellishment of an jazz standard by Thelonius Monk, a riff on memory, love and joy seen through the dark glass of 23 years of a no doubt lively, passionate, tumultuous and heartfelt relationship.

The beloved, photographed in water so long ago, becomes doubly enveloped in this mercurial substance; photographed in the inadequate light of a small bathroom in a New York apartment and now embellished through the application of dots that somehow bring the bathwater to a boil.

Bremer appears to have hypnotised himself in the course of tracing these images to the extent that a liquid ripple is generated as a kind of emotive undulation that courses over and through the images, independent of any photographic facts. Braids and knots appear that have nothing to do with the underlying tonal record of the lens. Sometimes, as in Ave Maria #21 (above) these embellishments of the product of the camera threaten to engulf everything, and yet somehow the subject stands clear while entangled in the meditation that has unrolled during the making.

In the hours that I have spent contemplating these images and the way that they represent the relation of drawing to photography I have come to understand two things. One is that this is an honest denouement; a climax in, and summation of, a relationship:

We have been intertwined and the boundaries are blurred – we both are different for it, for better and worse, we don’t know where I stop and she begins, we are truly familiar and one. These images are from right at the beginning when she was truly she and I me. Tracing her, tracing where she is and all the stories that came after. And the nice thing is that the works are also a monument, a remembrance, but also a celebration. They show her as eternally young and honestly I think of her still this way.

That is the truth of the nude in art; one person making themselves naked so that the other may see themselves in the ‘naked I’.

The other thing one finds here is embedded in the technique. On close inspection, the application of pen to photograph is neither engraving nor tattooing; I think instead of of embroidery. The word derives from braiding, and that is what is happening in Bremer’s illumination of his precious photographs, a kind of stitching of time and affection. 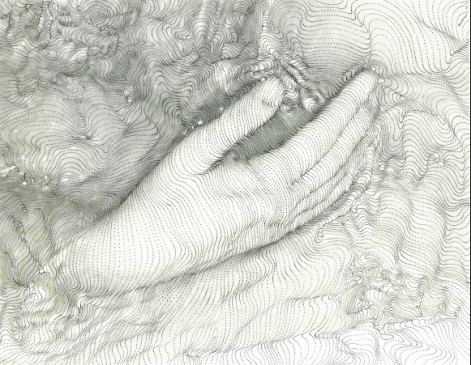