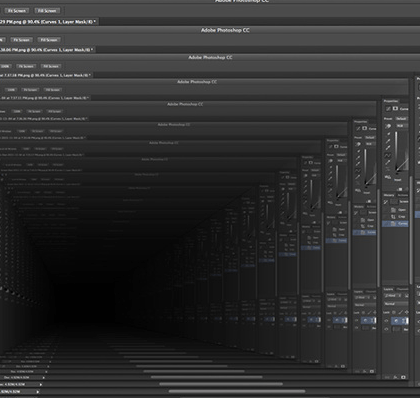 A sound loop between an audio input such as speakers and microphones causes the familiar audio feedback; an unpleasant, sometimes unbearable electronic squeal when unintentional, or tremendously cool, if it’s in Jimi Hendrix’s Foxy Lady.

Works by Matan Mittwoch exploit machine feedback in imaging equipment, an approach summed up beautifully in his Ting-Tong a set of camera bellows (for an 8×10 back reducing to a 4×5 lens panel) turned on itself, literally in a loop. In this position of course no light would be transmitted from one end to the other.

To anyone unfamiliar with this specific classic piece of photographic equipment, invented by Francis Fowke and patented in May 1856, would regard it as abstract, and that is how Mittwoch’s work fits the purpose of the exhibition Free of Immediacy to undermine the assumption that abstract art represents immediacy of expression. Instead, the exhibition embraces the notion of the thwarting of ardour and spontaneity in contemporary abstraction and to emphasise the programmatic and automatic. In Mittwoch’s case he raises questions about machine vision.

Another earlier work Lantern Magika uses an enlarger (which looks like a Durst Laborator to me) which projects an image of a blank Photoshop screen from a flat display inserted into the negative carrier, fed back into it from an image sensor behind the projection screen to create an infinite loop. ‘Seeing’ is taking place here, and it is being registered and transmitted and seen again ad infinitum; but is it seeing? Is a machine ‘sighted’? 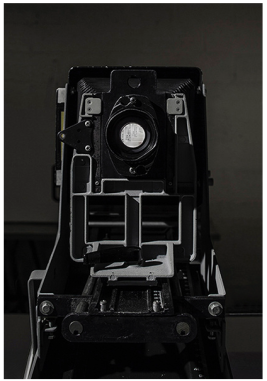 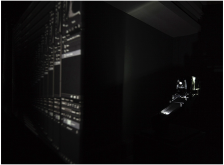 His co-exhibtor Rabinowitch’s floor and wall installations are configured using the rules of a mathematical operation as a metaphor of an impersonal non-human universe for which human perception and experience is irrelevant.

Likewise, extending on his idea of machine seeing for Free of Immediacy Mittwoch contributes Blinds; mural scale prints originating from a set of extreme macro shots made of a standard iPad screen, taken when the device is turned on but displaying no data. Like Antonioni’s classic Blow-Up in which imaging of the chemical photography era reaches its limit of resolution – grain –  here raw, unmodulated digital data is pushed to the extreme of pixelation.

An iPad and a camera were positioned perfectly parallel to one another on a disk driven by a robotic system. The iPad sent out a white image that the camera recorded and then sent back to the iPad for display over the course of three rotations. There is a sequence of eight shots for each rotation, for a total of twenty-seven. Each of the nine prints superimposes three shots.

The series was followed in 2016 with another of his series based on the iPad display, Step-13, in which the blank screen is copied and the copy reproduced on the screen, rephotographed and displayed again through 15 iterations.

As machine vision is tethered to ever more powerful artificial intelligence, the question of when machines will attain conscious sight becomes more urgent.