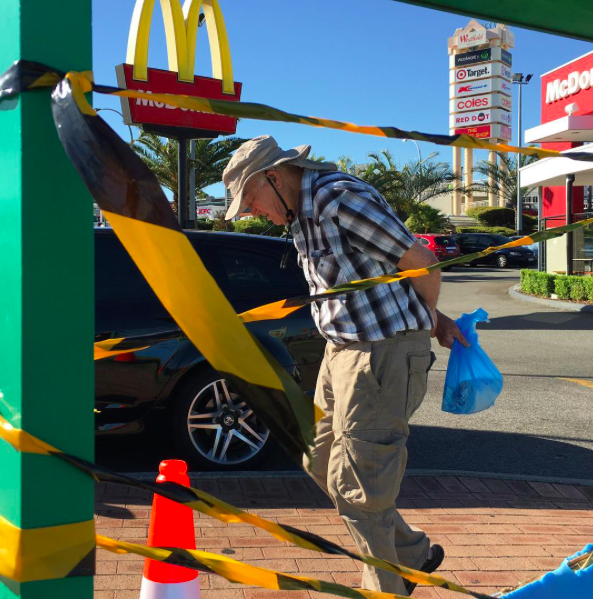 April 28: Where are the margins of photography here and now?

The Lawrence Wilson Art Gallery at the University of Western Australia, 35 Stirling Hwy (cnr Fairway), Crawley – 6009
Western Australia opens its annual  HERE&NOW, which this year highlights contemporary Western Australian artists working “with, or at the margins of”, photography, tonight at 6pm.

Chelsea Hopper is this year’s emerging curator given the opportunity to showcase “the outstanding work of contemporary artists practising in Western Australia”;

I wanted to continue the debate about and around photography within the landscape of contemporary art practice. Photography’s distinctive value lies more in its humble documentary function, its intimate examination and commemoration of everyday life, than it does in its obsolete technology.

The announcement of the show reveals a political stance;

HERE&NOW 17: New Photography aims to explore how Western Australians see themselves, how artists use photography to interrogate a place’s self-representation, and attempts to disrupt the dominance of east coast imagery in the Australian cultural imagination.

Given the fact that the exhibition proclaims such an agenda it will be interesting to see the works exhibited, though at this stage, given that the gallery is quite tight-lipped about what images the show will actually comprise, one can only go to the track record of each artist to see how they will ‘interrogate’ and represent the Australia’s largest state.

An understanding will explain this sense of discomfort about “the dominance of east coast imagery”; Western Australia is the country’s largest state at 2,529,875 sq. km, and though its population is spread at one person per square km., it is the richest because of its mineral resources, with a per-capita gross state product (GSP) nearly double that of any other state and, until the recent downturn in the mining boom, growing at easily twice the Australian average.

However WA is isolated from the most populous states, two hours behind them because of its distance to the west nearly 4,000 km drive away from Sydney by road (not much less than the distance from NY to LA in the USA of 4,625km). Thus a sense of competition with eastern states has arisen, expressed at the extreme in separatist sentiments, and unsurprisingly this flows through to the arts.

The artists that Chelsea Hopper has chosen to exhibit are all based in WA; Jacqueline Ball, Scott Burton, Lucy Griggs, Dan McCabe, Lydia Trethewey and Georgia Kaw. But they are not all pure photographers, which is where the qualifying “working with, or at the margins of, photography” comes into play.

Australian cities are homogenous and unless you know the landmarks or can recognise some fairly subtle differences in architectural styles, it is hard to tell one from another. 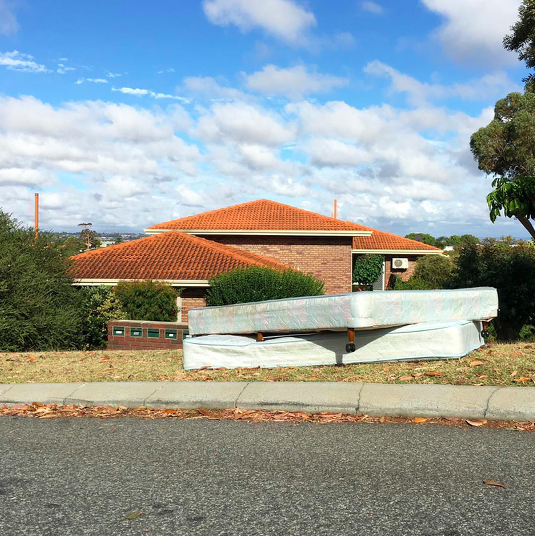 This sameness is most apparent in Scott Burton’s work. He is the straight documentarian of the show. He disseminates his wry observations via his Instagram account @scobierobie, but you’ll find infrequent mention of him or his work elsewhere online. Says curator Hopper;

The works raise questions about the way in which our instant connectivity has changed the nature of photography, how images are circulated widely and immediately, and the way in which we have become constant and unconscious visual consumers.

This may be the first time Burton’s mobile phone street photography has been exhibited, and what a discovery he is! His photograph is the only image representing HERE&NOW 17: New Photography on the Lawrence Wilson Art Gallery website.

Here an ingenious geometric poetic logic is at work. A man in his office shirtsleeves feeds a parking meter that sets in motion a chain of associations which mean we get much more for our money than a parking spot.  The overlapping rectangles at which the TV antenna points at top right in this image unlock connections with other rectangles and rhombuses and their shadows. The punch-line is the set of alignments that make a ridiculous figure out of the dead-centrally placed fall guy; the silly fake gas lamp whose shadow bears a jester’s hat.

Burton holds up a similar lamp in the glaringly broad daylight of Western Australia to discover other honesties. A shadow in the stacked discarded mattresses above pointedly inverts the vernacular Australian tiled roofline, while below high heels and their inverse –  ‘witches hats’ – index some stubborn colonial class differences. 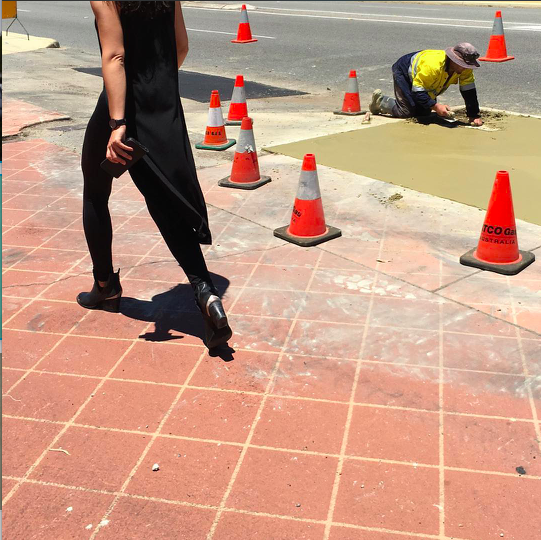 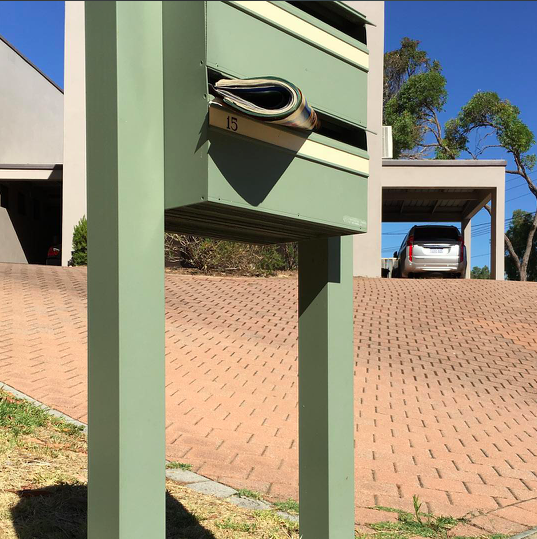 …but the process is much more considered than systematic typography. More critical, and amusing, for example, is his realisation of this bastard hybridisation (below) of pillar box and sleek digital architectural rendering which somehow results in the Spanish-mission mish-mash of the newly completed apartments. 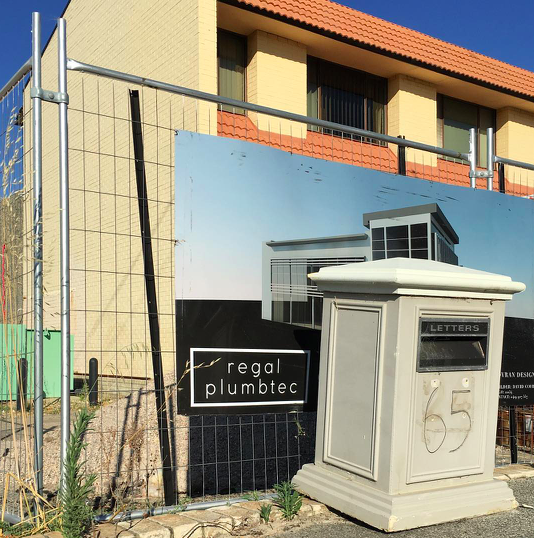 The same streets where Burton exposes the prosaic are also the haunts of Lydia Trethewey (*1992), whose work is a poetic hybrid of painting and photography, in which we find ourselves in that state of semi-consciousness of driving through the suburban streets, arriving, unable to recall the journey, at a familiar destination to wonder; were we travelling in a dream?

In Passing the Invisible she replicates that mesmeric state of noticing something before it is dumped in the subconscious, only to appear, perchance, in our dreams that night. It is not possible to say what is the ‘invisible’ here; the amorphous stain that flows onto the road, or the nondescript wild-sown European shrub that enters the frame as our car passes. Everything is in a state of flow for this passenger in the vehicle as she traverses the morning landscape on the way to work, mingling with an urgently-forming map of the day ahead.

The technique Trewathy initially used was to apply solvent to transfer her images to new paper surfaces where they would fade and parts of the picture would disappear;

I liked to get my hands on things. So I started with printmaking, solvent-transfers, where I could use rags and chemicals to influence the image. Photography was like note taking, where I could get detailed images almost instantaneously whilst the car moves down the road. Doing solvent transfers also allowed room for unexpected occurrences, and for me to play with the white space of the paper. I was hoping to find something about invisibility in the image disappearing, or partially disappearing. But I think in this case the invisible is also tactile: it can’t be seen, but it’s felt.

The technique for Passing the Invisible and others made and exhibited recently, she is applying the solvent directly to the ink-jet printed image:

…they’re not really painterly, because making them isn’t at all like making a painting. It’s kind of the opposite, working backwards towards blankness, because if I use too much solvent I get left with a white surface.

These are layers of human consciousness superimposed on urban experiences both in the making, since the process is hands-on, and in the reading. 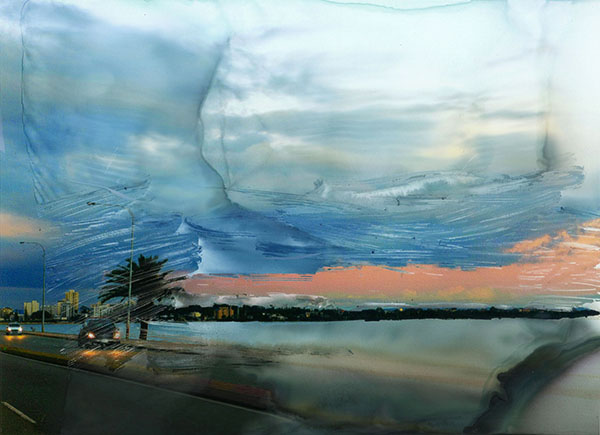 The photographic traces become residual, an excess that remains to connect the factuality of suburban reality to a lyric sumptuousness. Is her work ‘at the margins’ of photography? Trethewey’s interview with Hayley Anschutz of Colosoul Magazine provides her response;

…the photograph records something that is ‘out there’ and the camera becomes a sort of pointing device… I find it very restrictive, and prescriptive because it seems to always mean that the photograph is about time, lost time, memory and ephemerality, and irretrievability…The works…are somewhere between photography and something else.

Trethewey’s solvent-washes highlight a property of the urban and suburban environment; its ‘invisibility’, which comes tactically into play in Shadows on the hill by Dan McCabe (*1992).

His artistic strategy also relates directly to another aim of the exhibition which is to identify distinctive aspects of Western Australia. Having grown up in Brisbane in Queensland, the difference is especially clear to McCabe;

McCabe responded to this perception by making a car, a Mitsubishi Magna…out of photographs. His vehicle is a very common, ordinary 1980s station wagon, and by applying his photographs of it to cloth which he has sewn to fit a custom lightweight aluminium frame he has welded himself he has magically turned a car in to a house.

The result is a tent in which he slept at various sites around Melbourne for the Next Wave Festival May 5–22, 2016. Ubiquitous, white, and with its own ‘drop-shadow’ of fly-netting, the generic vehicle is a remarkably effective camouflage for a nomadic urban dwelling, but equally, it disrupts the Great Australian Dream; the stand-alone family home on a suburban block which bears sole responsibility for the notorious urban sprawl of Australian cities over what was once prime farmland and market gardens, and for enslaving the population to the car. With the current ‘real estate bubble’ in Australia, the Dream is out of reach for most of McCabe’s generation, many of whom, homeless temporarily or long-term, resort to sleeping in their car.

Lucy Griggs spent eighteen months in a residency in Almaty, the former capital of Kazakstan, a place known, despite extremes of temperature, for its year-round sunshine that flooded her studio, causing her often to retreat to another room . During the residency Griggs made use of the dirt-cheap notebooks available, “a stack for less than a dollar”, in the shops there.

They are very simple and old-fashioned with a utilitarian aesthetic and they have remained unchanged from the Soviet era (that ended just over twenty years ago). I’d noticed that these exercise books had varying shades of colour based on their exposure to sunlight, so I placed a little Joseph Beuys book on top of one and placed it under direct sunlight for a few days as an experiment to see what would happen.

Is this experiment the basis for the works Griggs will show in HERE&NOW 17; cyanotypes that also require long exposure to direct sunlight?

Cyanotypes hark back to the famous publisher of the world’s first photographically illustrated book, English botanist Anna Atkins. In WA the poppy is a declared weed, a colonist which thrives in the in this sun-drenched state.

Installation artist Georgia Kaw’s contribution, in terms relating to photography, for the moment remains as much a mystery as her photograph of this anonymous crouching figure.

A Sydney College of the Arts graduate (2010) she also studied at the Academy of Fine Arts, Vienna, exhibiting in 2011 in Germany and since returning to Australia has exhibited  and conducted curatorial projects in both Sydney and Perth, where she now resides. The title of her recent project IMAGE MIRAGE IAMAGE at Moana Project Space provides a clue to her approach and relevance to this exhibition.