April 4: Photography is such a solitary art. Why don’t we collaborate more often?

The gallery la Fontaine Obscure – Espace Photographique Galerie, 24 av. Henri Poncet in Aix-en-Provence opens an exhibition by Virginie Plauchut & Cath. An. Effleurer L’horizon: La correspondance oubliée until 29 April with a vernissage tomorrow at 6:30pm. The title of the show translates as ‘Touch the Horizon: forgotten correspondence’ and consists of Polaroids and texts made collaboratively over 15 days in June 2011.

‘Forgotten correspondence’ it literally is, given the time elapsed after which the writer and photographer have decided to show the work, which is some of their earliest, and of course it is ‘correspondence’ in the sense of communication between them.

Deciding to write to each other in their own way with images and words, Plauchut left for the Western half of America and Cath. An. stayed in the East. This not the first collaboration that the writer/photographer Cath. An. has undertaken, having worked on Demande à la lumière… with Julie de Waroquier, and then with Alain Arbib (*1970, Tunis) on Bigbang in which she took photographs and then sent the black and white film, rewound, to Arbib who re-exposed it in his camera over the latent images to produce chance superimpositions (below).

Cath. An. (*1981, Paris) is self-taught in photography, having studied art history, then obtained a degree in architecture in 2007, then took up photography in 2009. Published in international magazines, her personal work has been exhibited since 2010.

In her collaboration with Plauchut she supplies the words, short paragraphs that seem in their brevity and ambiguity to be the textual equivalent of Plauchut’s polaroids. For her part, Plauchut says of film photography:

I love the smell of film, both negative and instantaneous. It’s the same, I love and I need its factuality, a tangibility with this element of the unknown.

These are landscapes of America that remain anonymous, specific to some unnamed location, but are each animated with a comment or question or statement from Cath. An. to Plauchut and to which her images reply or provoke a response.

The first pair refers to French author Christian Bobin and his comment that “All our lives we spend going back home again”, which is given added poignancy in this view of power poles leaning precipitously into the distance, interrupted by the Denny’s take-away sign on a nondescript flat-roofed building.

The sky is at that point where the blue of day and the red of sunset are at odds, an effect reinforced by the intrusion of flare in the bottom of the Polaroid image. It is that accidental ‘element of the unknown’ which Plauchut seeks that makes the image so effective in responding to the text. 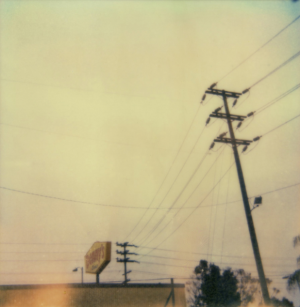 In other pairs, the image precedes the text, which reads, roughly translated,

A ray of sunshine flooded my heart with light.
Today he said “YES”.
My beloved.
What was your “yes”?

and so responds to the image with a brief love story quite appropriate to this intentional American cliché, a Hollywood special effect rather that something divine.

Though the god-struck does appear in the final image opposite the query,

In the flickering of a candle, I think of you very much this night.
Around me laughter and songs of joy rises.
Do you hear my heart singing for you today?

The image, of a roadside memorial perhaps, is rendered in the distorted colour and fudged focus that is typical of out-of-date or deliberately mistreated or overheated instant film, so that the little shrine appears no longer to be resting on the sand on which is was made, but somehow levitates into a chemically darkened sky toward an electric star, an artifact of development.

Born in 1976 Plauchut taught herself photography in 2009 and has developed narrative  themes in which the human is a presence, visible or not. Since 2011 her photography and writing have opened up the Pandora’s Box of intimacy, introspection, loneliness and confinement, venturing into extremes with her series on problems and taboos related to childhood; incest, in Without evidence and without corpse; the lost children of Les Disparus; The high walls, about the confinement of girls in religious institutions until the end of the sixties; mourning for an infant child, Gianluigi; and bullying, in Lakeview.

For Les Disparus Plauchut revisits the ordinary landscapes where the children were seen for the last time, where parents go time and time again, which stubbornly hide the secret of what happened. These are shot at moments when there is no human figure present and from a perspective that could be that of the child in the few moments before they were gone.

While Les Disparus is shot on film, Les Mures Hautes uses the Polaroid to generate a miasma that envelops these ugly institutions in which girls and young women were incarcerated during the 1960s.

In other series Plauchut depicts, equally subjectively and compellingly, the ritual of bulemia, her rediscovery of photographs by her father during his military service in Senegal from 1960 to 1962, the slaughter of a pig, infanticide…these are all the product of a restless curiosity and produced over the remarkably short period since 2011, the beginning of what is to be no doubt a much longer career.

Further information and examples of Virginie Plauchut’s many projects may be found on her website from which I have taken these examples.

In contemplating the notion of collaboration, another, longer term partnership is also on show; GLUCK 50 gallery, via Cristoforo Gluck, 50 in Milan today opens Welcome To Birdhead World Again – Italy 2017, by the duo Birdhead, Song Tao (*1979) and Ji Weiyu (*1980). The show is the result of their residency at Gluck since December.

They, like Plauchut, Cath. An. and Alain Arbib, who began their collaboration in 2004 also work in chemical photography. The products become installations of many hundred images arrayed in large grids, with text, for each show. Apparenty almost random urban and landscape observations that link the contemporary with traces of the ancient, their imagery coheres because of an irreverent humour, or the intuitive interconnections the pair sets up through interaction.

A further ‘collaboration’ happens between images. Stephan Groß (*1979, Höxter) has a new show at G.A.S – station, Tempelherrenstrasse 22, Berlin/Kreuzberg. It is not described on their website and they supply only one image, indicating that it will be an installation with light and sound, called lift me up / sink or swim, with a vernissage being held tonight at 7 p.m.

Groß has worked with montage, and it is to these works I am referring, clever conjunctions of images, most appropriated photographs, some well-known paintings, with colours and forms so similar that they join with minimal blending or interleaving, but with subject matter so at odds that the effect is disruptive. [note, four single works are presented in pairs below] 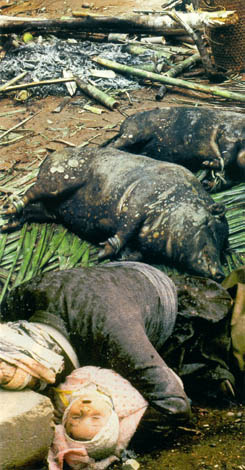 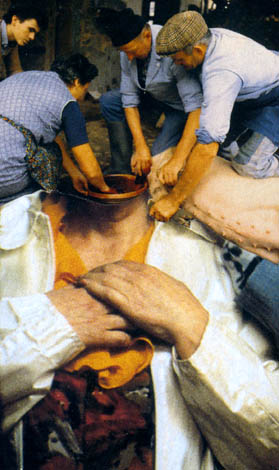 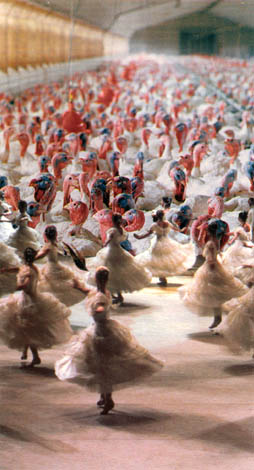 In terms of design they are not dissimilar to Australian Zoe Croggon‘s clever stitching, but with a greater socio-political intent and effect. Since all the images he uses originate from someone else’s camera, these are in effect ‘unintended’, post-facto collaborations, a conversation with the original across similarities in chroma and tone but made to mordant effect.

Collaboration in photography is matter of course where human subject and photographer meet, but it is still rare to find it occurring between photographers. We should be less insular!