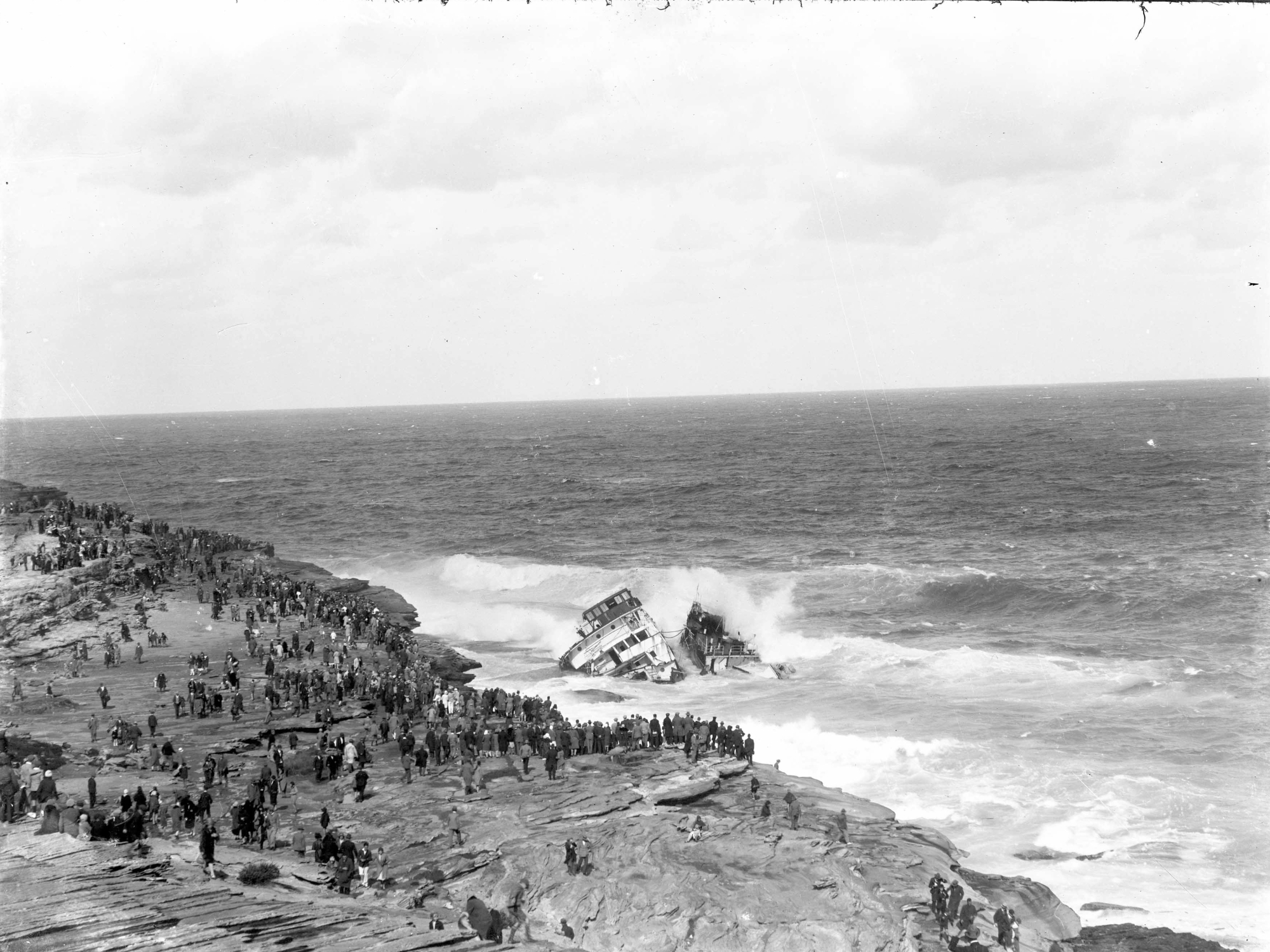 April 2: Photographs of disasters are compelling, even when it is old news.

This date was fateful for two ships which suffered accidents in Australia and New Zealand, both recorded in historic photographs of 1898 and 1931.

The first of these, in New Zealand,  was really a parking accident, the result of the Wakatipu running into the Laira, leaving her partially submerged at Dunedin Wharf on 2 April 1898, as the Otago Witness reported on 7 April 1898:

COLLISION IN THE UPPER HARBOUR.

An extraordinary accident occurred on Saturday forenoon in the upper harbour, whereby a barque, lying alongside a wharf where she might have been expected to be immune from danger, was sunk at her moorings. The Union Steam Ship Company’s steamer Wakatipu, Captain G. G. Smith, which had arrived from Sydney, via Cook Strait, was coming up the harbour to her berth at the Tongue Wharf and when passing the Victoria wharf, struck the barque Laira, Captain Hoigh, on the starboard side immediately forward of the mainmast and pinned her against the wharf with such force that a fender which bad been placed between the barque and it was driven through her port side, and the wharf itself was actually canted.

The steamer ran into the barque stem on, cutting through her side, and the Laira filled so rapidly that she sank in eight or 10 minutes after which time all that was visible of her above the water was the tops of the deckhouses. She settled down on an even keel, but to provide against the possibility of her heeling over a stout cable was bound around her mainmast and then attached to a powerful stake that had been driven into the wharf. The Wakatipu herself did not escape altogether without injury, as she sustained some damage to the plates of her starboard bow and the shop Canterbury, which was moored ahead of Laira, suffered some damage to her jib boom and outriggers.

It was a slow-motion collision, slow enough to warn passengers to stand back in order to avoid the inevitable crashing timbers. The case was heard in the Supreme Court in Dunedin on 19 September 1898 and reported in  The Otago Daily Times Friday, September 23, 1898. Despite protestations that the steamer had into the side of the shipping channel and had needed a boost of sped to get out and that the starboard anchor had been dropped to slow the ship, the court decided against the defendant Captain Smith.

Few New Zealand newspapers of the time carried pictures apart from advertising engravings, so the incident is recorded only in a wordy account.

However, photographs of the incident survive due to the enterprise of a photographer who specialised in ships and ‘ships portraits’. 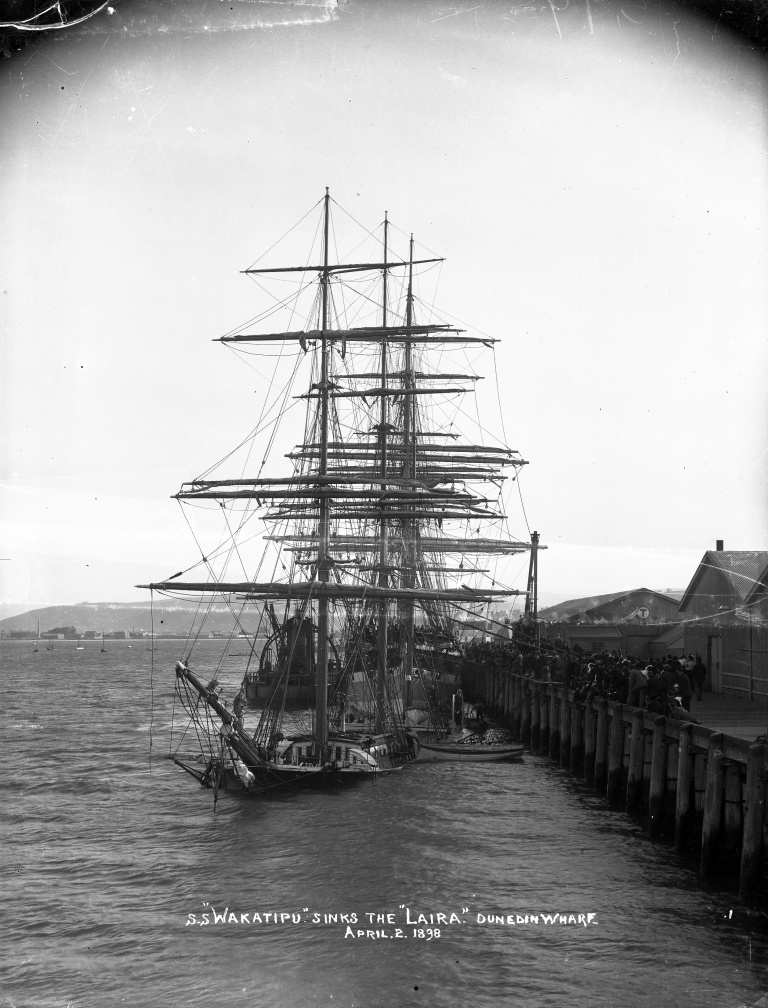 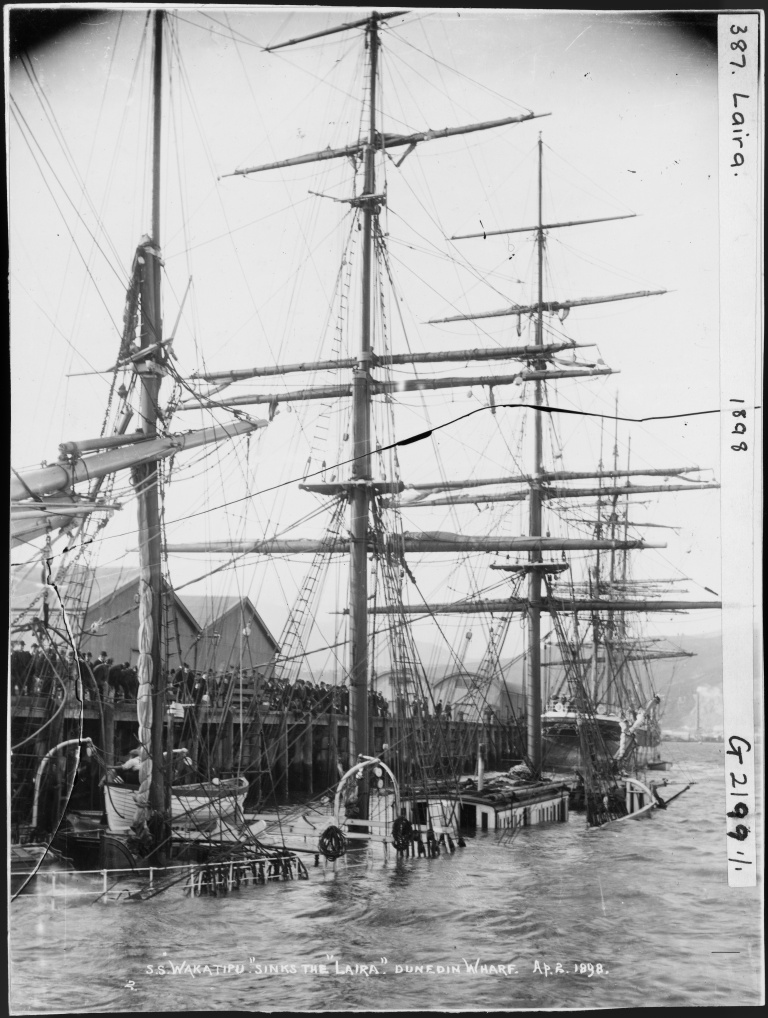 The photographer, who systematically inscribes each of his negatives in a neat legible hand, is the remarkably energetic and outgoing David Alexander De Maus. Born in London in about 1847 or 1848 he was the son of a hatter of the same name born in Glasgow about 1811, and Elizabeth, née Oatley or Oattley of Ayr. The census records show that he lived in Edinburgh with two brothers and two sisters at 54 Candlemaker Row by 1851 (just down the road from the celebrated Greyfriars Bobby inn) so it is possible he was born there and not in London. By 1861 he was 13 and employed as a clerk, a background that no doubt formed the neat handwriting and organised cataloguing of his photographs.

This was the period of Scotland’s Highland Potato Famine caused by the same blight that brought on the much more disastrous famine in Ireland and which, though it did not affect Edinburgh residents directly, resulted in massive emigration to Britain’s colonies. Encouraged by his brother James who had gone before him, De Maus decided on New Zealand as his Shangri-La and boarded the ship Caribou which arrived on the opposite side of the globe at Port Chalmers on 13 January 1867.

There he found neighbouring Dunedin, a place and a climate not unlike Edinburgh, but then, in the midst of a gold rush, offering every opportunity for a young man of twenty, and de Maus was ready to take his chances. He joined his photographer brother in his already established ‘Royal Caledonian Studios’ in Princes Street, Dunedin. However James De Maus was bankrupted that very year in April by a disastrous fire that consumed Princes Street. 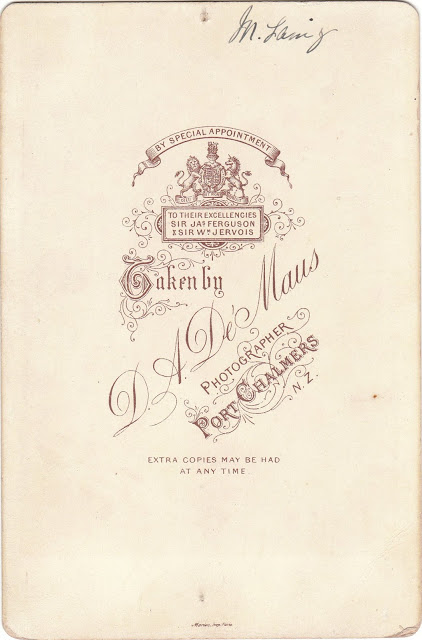 Undaunted, David drew on his skills as a singer and stage performer to tour the Goldfields, announcing in “West Coast Times” 27 March 1869 his appearance at Hansen’s assembly rooms in the role of Jemima Lobb “In which character she will tell the touching tale of the footman who wore false whiskers.”

After three years he had sufficient resources to settle in Port Chalmers and to operate a studio at 62 George Street. As a photographer he was hugely prolific, but it is his specialisation in photographing ships of his era that makes him invaluable now to maritime historians.

In 1878 his business was successful enough that he was able to marry an Australian, Anne Cooper Buchan from the Ballarat goldfields, and later to be elected Mayor of Port Chalmers 4 times between 1899 and 1913.

He produced hundreds of ‘ship portraits’ as they lay at harbour in Dunedin. Many, like the Akaroa above, were painted with fake gun ports to deter pirates on their typically 16 weeks at sea (the record being 10 weeks) on the clipper route from London to Port Chalmers in the 1880s. The gun ports in this image from thirty years before by Gustav Le Gray (with its famously montaged sky) has several sources calling it the “French Fleet’ when really depicts just ordinary shipping at Le Havre; theirs too are just painted cannon openings.

No doubt then, for the photographs he produced of the unfortunate, and expensive, collision of a steamer with a sailing ship, he was the man on the spot because of this devotion to portraying ships.

Judging by the crowds attracted to the event, his business in selling picture cards would have been brisk. Details of prints from his glass plates show hundreds of bowler-hatted ‘gawkers’. The first is slightly marred by camera shake and emulsion damage, but both can stand a high degree of enlargement (below). 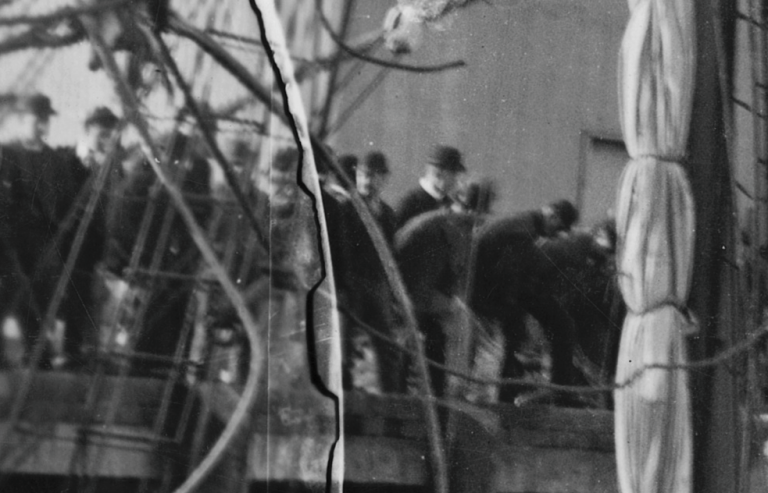 Dunedin was the point of departure for Antarctic explorers, and De Maus made several pictures of the Terra Nova as she set out on Scott’s ill-fated British Antarctic (“Terra Nova”) Expedition (1910-1913) in competition with Amundsen’s in a race for the South Pole.

His picture, taken from a high vantage point shows the Terra Nova leaving Port Chalmers with the ship steaming away from the wharf and a tugboat alongside (the third mast, right), yachts in the harbour, and crowds of people standing on the pier.

The second accident thirty-three years later, in Australia, involved the diesel-powered Malabar, named after after a small town in Java, a vessel of 4,512 tons gross, which had left Melbourne on 31 March 1931 with a complement of 109 officers and crew and 28 passengers, on a voyage under the command of Captain Leslie. This was to be her 32nd trip.

At about 6.45 am on 2 April 1931, the Malabar was one mile out from Cape Banks, the northern headland of Botany Bay. 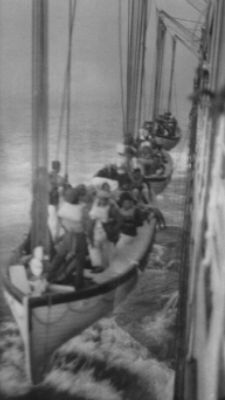 The sea was calm as she entered a dense fog which prompted a slight change of course, and at 6.52 am she ran aground on the northern side of Long Bay, about 14 kilometres south of the Harbour, despite efforts by the captain to reverse her off the rocks. All aboard were transferred to shore.

The ship broke up surprisingly quickly. The following images, by an unidentified photographer, show the remains of the bridge being battered by a heavy swell.

The sight was witnessed by a large crowd. In the midst of the Depression, it was cheap entertainment, as the Sydney Morning Herald even two days later on 4 April 1931 reported “There were two principal places of amusement on the Good Friday holiday – the [Royal Easter] Show and the Malabar – and it appeared that everyone went to both”. Crowds of around 150,000 were estimated.

The drama of the lowering of the lifeboats (above) was captured by an enterprising, but unnamed individual on board, and it does record the misty conditions. By contrast the matter-of-fact and distant image below, taken quite late in the day, presents us with a crooked horizon and plenty of superfluous sky, but sufficient detail to reveal the variety and number of spectators; couples, lone men in suits, and even families, some with picnic hampers who look as if they have settled in for the day. 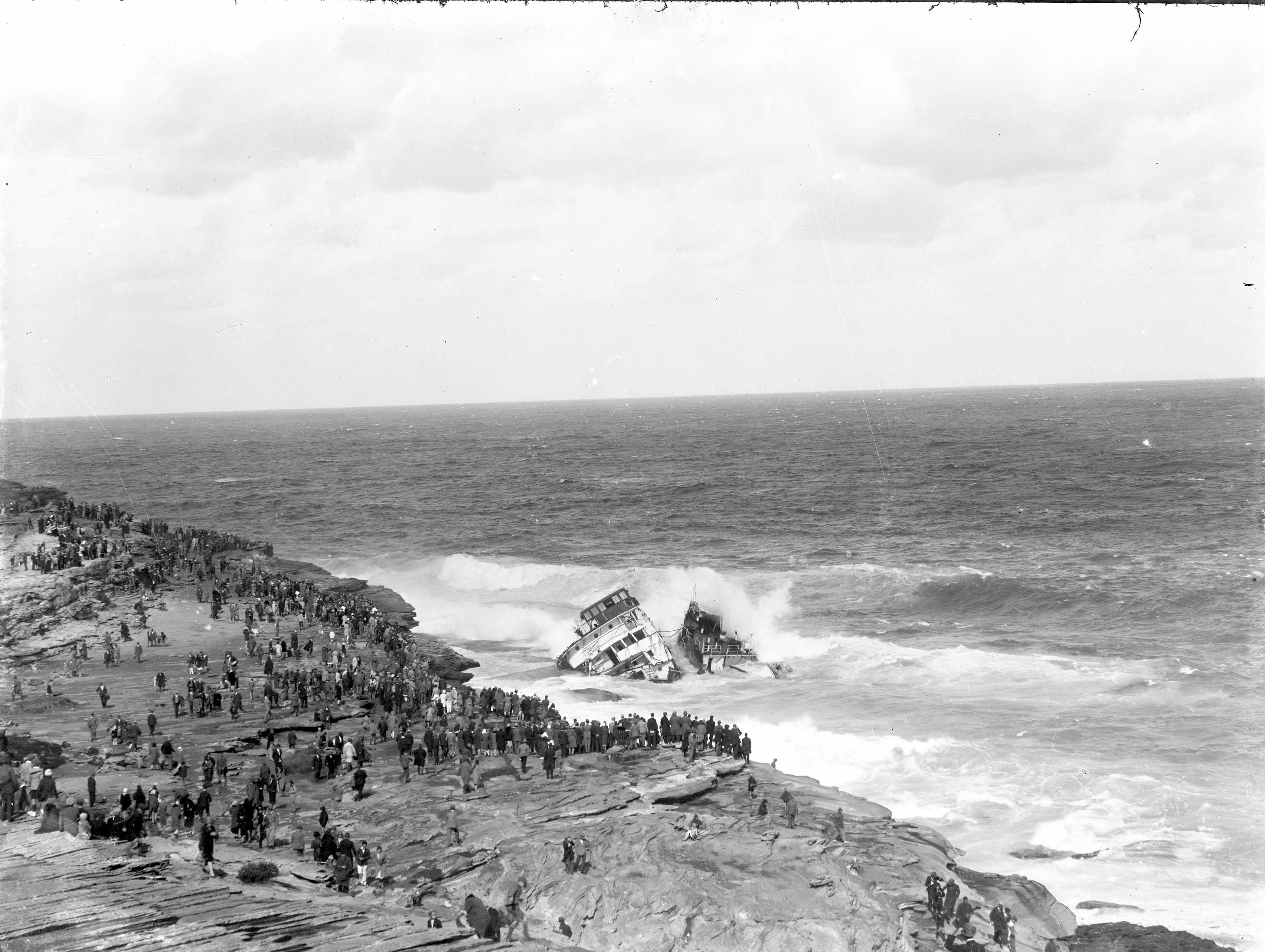 The photograph doesn’t appear in any of the newspaper archives but is held by the Burns Philip Collection in Sydney. Also to be found there is a tighter view, from the same camera and from exactly the same vantage point, and judging from position of individuals in the crowd, taken only moments before or after, but with a longer lens and straight horizon. It is marked with the date 2.4.31 and a cryptic hash mark (or is it ‘T.T.’ or ‘T.I.’?) and the letters AII or letter and numbers A11. 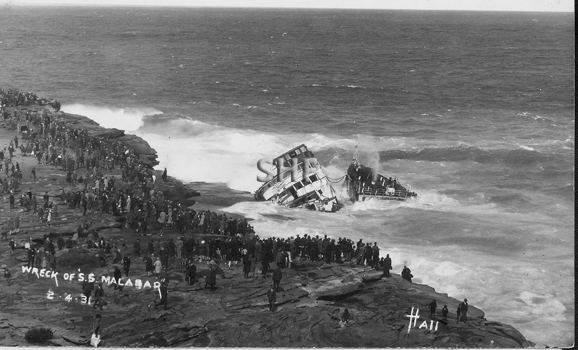 While De Maus is well recognised for his photography of ships in the transition from sail to steam, some photographers are fated to remain anonymous.

In case you are concerned, the only casualty from either of these incidents was the ship’s cat on Malabar. She refused to get into the lifeboat.

De Maus died at 78 years old on 17 July 1925 and was buried at Port Chalmers alongside his 4 infant children. The two daughters who survived to adulthood went to live in Devon, England with her mother in 1934 and the photography collection was divided between them with the ship photos remaining in England by his daughter Daphne who married to become Mrs Grayston, while the others were kept by the other daughter, Mrs Orma Josephine Armour who returned to Outram near Dunedin. Many may now be found in New Zealand’s Alexander Turnbull Library, while many of De Maus’ human portraits may be found on the market.