Mikhail Tarkhanov died on this date in 1962. A Russian avant-garde graphic artist known for his abstract, water-based textured compositions he was one of only three known Russian artists (with Lissitzky and Zimin) making experimental photograms in the 1920s. A contemporary version of both of these ingredients feature in the scanner imagery of Australian Ryan Tews whose exhibition Elucidation of Worlds at Yarra Ranges Regional Museum, 35-37 Castella Street, Lilydale, Victoria closes today.

Tarkhanov (not to be confused with the Russian actor of the same name) graduated with an M.A. in Applied and Decorative Arts in 1915, later enrolling at VKhUTEMAS,the famous school of Russian Avant-garde art, where studied with Futurists David Davidovich Burliuk and Vladimir Vladimirovich Mayakovsky and other artists who soon became prominent in the Russian avant-garde.

His training in photography was a result of  his service in the Russian Army in Tzaritzin on the Volga river in 1916 as an artist-topographer. Wounded, hospitalized and released, he came back to Moscow in April 1918 where he became a member of the SDPIKhP (“Union of Applied Art and Art Industry Activists”). He served there as a secretary of the Graphics and Publishing Department. In 1919 he worked as a manager of the “Soviet Art Workshop” in Sokolniki, Moscow. The same year he became a Director of the “Industrial Exhibition No.7”.

After further military service 1919-1921, he became a draftsman at the Moscow District Military-Engineering Committee while also picking up his studies at VKhUTEMAS once more, from 1921 through 1927, under such prominent Russian Avant-garde artists as Vasili (Wassily) Kandinsky, Vladimir Favorsky, and Nikolay Kupreyanov. From 1919 to 1931 he exhibited with such prominent avant-garde artists as Natan Altman, El Lissitzky, Kazimir Malevich, and Alexander Rodchenko, Gustav Klutsis, Vladimir Lebedev, Lyubov Popova and others. He became widely known for his book design and graphic art.

We see Tarkhanov in these images experimenting with both painting and photography in which an interest in repetition and pattern are obvious. The painting made in a technique using a paste of starch and pigment, wiping it back with a shaped scraper from top to bottom of the design so that the forms overlap to represent the repeated heads of rushes nodding in the wind. A similar patterning is followed in his simple photogram of maple tree seeds in which the veined transparency of their membranous ‘wing-tips’ echoes the scraper-board like markings in the painting. Grass seeds overlap in the design below to assemble into the shape of a swallow.

The official status of Socialist Realism from 1932/1933 until his death prohibited Tarkhanov from openly exhibiting any of his abstractions, so he secretly pursued his abstract work while working officially for various Soviet institutions. Much of his oeuvre has remained unseen until the present. Tarkhanov’s works are included in the permanent collections of the Tretyakov Gallery, the Russian Museum, the Pushkin Museum of Fine Arts, and at the Getty Center. 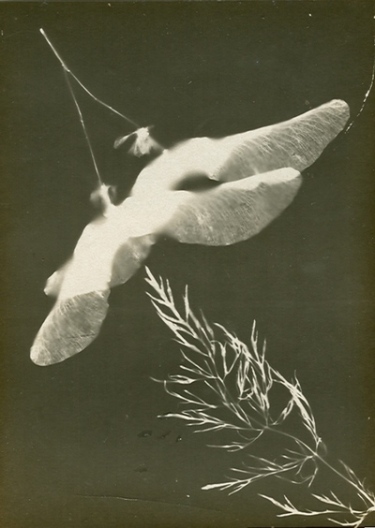 I’ve cheekily set Ryan Tews large format macro photograph on glass negative (right) next to another of Tarkhanov’s photograms of maple seeds, because I am struck by similarities that also appear in the two artists paintings (below). 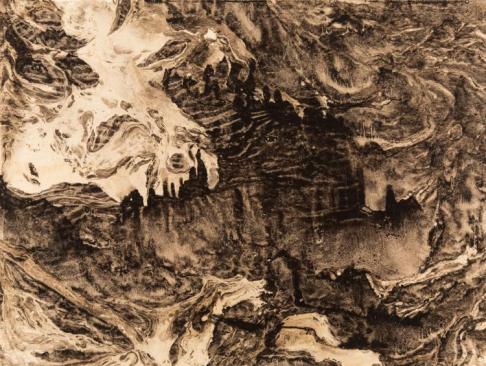 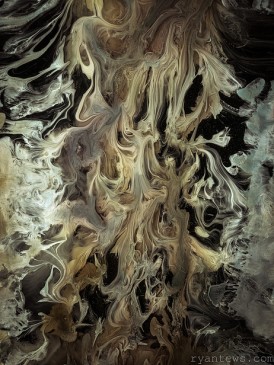 On Tews, it is very difficult to find information; like Tarkhanov he unfortunately shares a name with another, in his case tattoo artists in the USA and Australia.  Apart from traces of his talents as a musician, as a drummer with the bands Stray Hens and Morelands, information on his activity as photographer and artist is restricted to his website, and while it helpfully displays his imagery, on how he has made it, why and when, it is mute.

While he put his musical skills to good use in playing piano improvisations at the opening of his exhibition, no record of any other exhibition is evident. We are looking at an ’emerging’ artist, who has warranted so far only a small article in the local paper. Nevertheless I find his work well worth the investigation.

He works in a variety of media, using the 35mm camera for photographs of landscape in motion, glass plates on what appears to be a quarter-plate camera which exhibit a strong tactile quality that is enhanced by imperfections in the plates caused during their processing. Intriguingly some of the marks are of the kind found on wet plate imagery, such as the pooling of emulsion at the plate margins which leaves dark edges.

Tews also makes ‘scanographs’ using a high-resolution flat-bed scanner which produces macro imagery like that he has achieved on glass, and they are the works exhibited, in large prints with a longer dimension of about a metre, in Elucidation of Worlds; ‘elucidation’ no doubt being a reference to the action of the scanner in casting its dazzling light over objects placed in it. Among the objects he has scanned, which include shed snakeskin, shells, resin and butterflies, are his own ink and oil paintings. 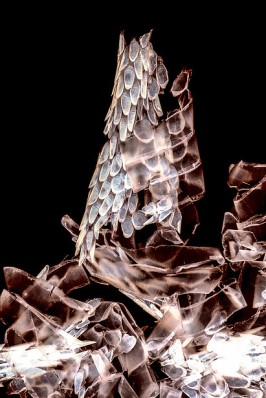 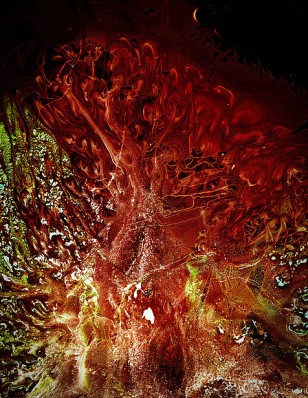 He remains an enigmatic figure, but one worth worth watching, an artist who delights in abstraction as did Tarkhanov 80 and 100 years ago. Beginning his career, he has yet to find a unifying concept beyond technical applications in the macro field, and though his interest in natural forms and the environment are apparent, and his imagery compellingly, and sometimes eerily, beautiful, he has yet to take a particular stance.