Albatross provides an introduction to O’Neil’s work, all collages of mostly black and white images from her library of books and magazines, sometimes rescaled for use. Here we are presented in a simple lesson on her procedure in the most basic of collages, one image placed against another. The sand on which the sunbather and the dead albatross lie is close enough in tone to visually ‘merge’ the two images even though the scale sightly varies. At a distance the figure seems to hover, suspended over her own shadow cast over the undulating sand, so that the first impression is that of a single image.

On close inspection this illusion falls apart and we are left to contemplate two bodies, one alive, but who wears what might be a strange white death mask; the other in full flight, but dead. One feels the heat of the sand underneath her and hunches her shoulders to the penetrating rays of the sun. The other feels nothing, though we feel for it, a legendary bird come to rest after a fight with the sea or some tempest which has tossed it here. Ironically the sunbather’s towel flaps like wings, setting her on an imaginary trajectory out of the image in which she is so tightly confined.

The mid-grey sand bears traces that we may decipher, imprinted, as is any photograph, as cryptic marks. They might tell us about the bird’s dying gesture, a visitor to, or her partner’s  departure from, the bather, the craquelure of the caked, wind-dried sand surface where her feet furrow it signals the way she has cast herself down to remain  unmoving even as this picture was taken, as if rest is strenuous. Into the tautness of the tendons of her ankle and the back of the knee, the drawn up shoulders can also be read a kind of flight, of escape.

Indeed, Escape Velocity may be read as O’Neil’s aspiration of her images, her intention that their joint fission will accelerate thoughts beyond the dead weight and tugging gravity of mere representation.

Mirage is more complex, but starts with a magnificent gesture, the open, uplifted hand and arm, that casts the multifaceted diamond, or conjoined pyramids, before us. In it we read an edenic garden in which couples embrace, while the upper triangle is occupied by triumphant architecture unfurled across the mountain by two goddesses or angels at the centre who invoke the beams of energy that extend from another pyramid at the heart of the design. Above are myriad clouds against which a finial of vapour or smoke rises.

In Dark mist through the floor an array of multiplying images is likewise ordered within geometry, this time of triangles intersecting at their points to create a vortex of interlocking slivers of imagery. At one corner swimmer hangs, steeped in deep indigo, a counterpoint to the tossed hair of the hybrid, androgynous figure. Above is a mosaic of sea and sky intersecting with an underworld of darkness. The artist tells us “Dark mist through the floor” is how Dickens, in Pictures from Italy describes the atmosphere in the Roman oratory where St Peter was imprisoned.

Turned to stone by forces more titanic than mere sex, this couple have become statues, standing stones fossilised in an intricate geology.

“I try to reconstruct the world from memory, or at least map it,” explains O’Neil.

Inspired by Eugene Boudin, artist son of a harbour pilot in Le Havre who was among the first French painters to work en plein air, Jacqueline Salmon, another beachcomber, keeps a weather eye on the changing skies and seas.

She photographs the sky, the sea, the foreshore at low tide, beyond the harbor, and all the kinds of light, the air circulating, that drives the wind, following the labours of Boudin, and those other precursors, Cozens, Constable, Turner. The painters who paved the way to Impressionism all came in the wake of the scientific discoveries of Luke Howard, the first, in 1803, to name the clouds, as Salmon describes here:

Her collages are simple assemblages, like the grid above, or they combine photography with drawn or copied meteorological and tidal notation. 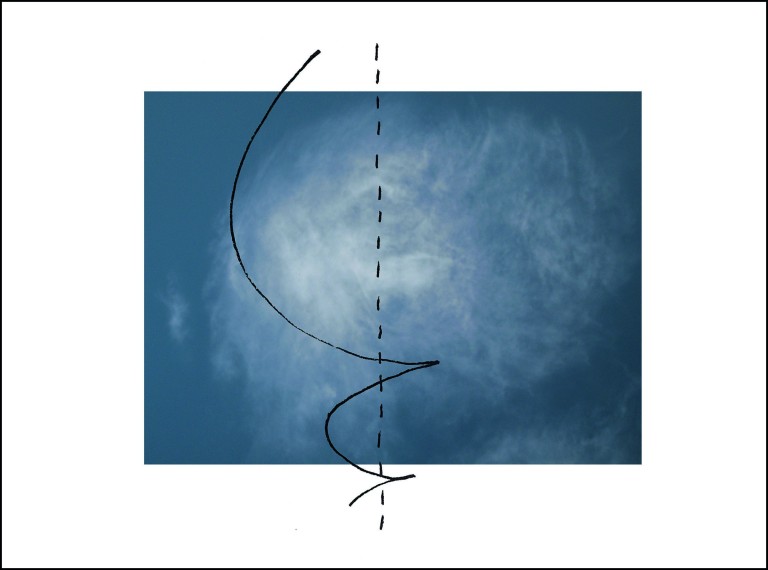 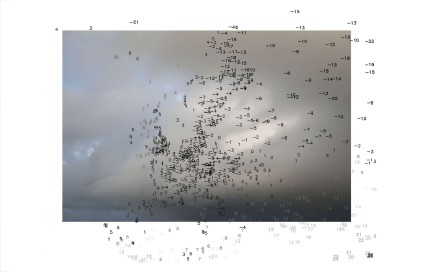