February 18: In classical music and in jazz variations are an accepted part of composition and performance, formal technique where material, either from the artists own oeuvre or another’s (and usually ‘quoted’ at a point in the presentation), is repeated in an altered form.

Variations do not normally alter the melody content nor interrupt or excise from the original material: their creative content is based in rhythm, dynamic, note length, ornaments and other formal structures.

A ‘development’ is related to variations, but is more radical: here the melodic material can be developed, altered, re-ordered and presented as fragments of the original and may include material from other melodies or themes.

Artists who work in series do so on similar principles to the ‘variation’ or ‘development’; Monet’s Haystacks and other series being an example that incidentally appeared at the same time as peak in interest in variation in Impressionist music.

Photography, by nature, invites repetition; the ‘typology’ as practiced by the Bechers is the classic example. I’ll leave you to decide what to call the work of serial photographers Helmar Lerski, born on this date in 1871, and Miriam Böhm (*1972, Frankfurt) who opens a show tonight at WNTRP, Berlin.

Lerski, Helmar was born Israel Schmuklerski in Strasbourg, then a German town. He moved from Zurich where he had begun a career in banking, to the United States in 1888 where he became an actor. It wasn’t until he was in his forties, in 1910, that he took up photographic portraiture as a profession when he became involved with photography through his wife, an actress from a photographer’s family. His unique portraiture using unusual lighting effects attracted considerable attention in the USA.

Back in Germany in 1915, and until 1929, he became a successful cinematographer, with a credit as Director of Photography appearing on William Wauer’s Expressionist Peter Lump in 1916, and listed in credits for films including on Der heilige Berg (‘The Holy Mountain’) a 1926 German mountain film directed by Arnold Fanck and starring Leni Riefenstahl, Luis Trenker and Frida Richard.

Experience in cinema clearly has an influence on Lerski’s photographic repertoire. He is credited ‘Special Effects’ on Frtiz Lang’s 1927 Metropolis which employed the Schufftan process to montage miniature sets into the full-scale shot using mirrors.

This process was used by Lang to create a sense of vast scales without having to create even larger sets; the upper floors of the “worker’s city” buildings, for example, were mirror images of models montaged in-camera, while the lower floors were constructed full-scale in one of the film’s massive sets.

He worked on Die Abenteuer eines Zehnmarkscheins (Uneasy Money) with pioneer silent-film director Béla Balázs, who in his The Spirit of Film writes of his theory of physiognomy shot on a minute scale, in extreme close-up: what he terms ‘microphysiognomy’, the ‘face’ of inert objects and body parts revealed in close-up not as ‘the face we wear, but our actual visual appearance’. These are ideas very close to Lerski’s own, which as we shall see, he applies in this next development in his work.

By the end of the 1920s, prompted no doubt to lay-offs in the cinema industry in Germany during the Depression, he had turned his attention once again to portrait photography and took part in the avant-garde movement that was effecting radical changes in the language of the New Photography, as catalogued in the legendary Werkbund exhibition Film und Foto (1929). But Lerski’s pictures were only partly in line with the maxims of the New Photography, and they questioned the validity of pure objectivity.

It is around this time that he began experiments that were to become his book Köpfe des Alltags (1931); portraits in extreme close-up of anonymous people from the lower classes of the Berlin society, presenting them as theatrical figures in the roles of “seamstress”, “chamber maid”, “beggar” or “textile worker”. His models rarely look at the camera, ad they do not smile; these are not commercial portraits. Junge Arbeiterin (‘Young Working Woman’) from the second series, is a tour-de-force in lighting in which piercing rays rake across the hair and filter through it. The face is sharply delineated with both blown-out highlights and nearly black shadow to the extent that it looks quite like a Renaissance chalk drawing, an impression augmented by the bronze-like warm tone of his prints. To achieve the separation of forehead and cheek from hairline, the dark outline of the jaw and the grimy pall that falls between his weary subject’s eyes, Lerski’s genius is to shape his light from mirrors placed at a distance from her face. The modelling of detail, like the exaggeration of the roundness of the woman’s chin and the fullness of her lower lip, is astonishingly precise and the effect both heroic and touchingly human.

The Sun, 149,598,261 km away, projects what are laser-like near-parallel rays, since it is effectively a point source of light with a width of only 0.53 degrees. Any other light source of that diameter placed where Lerksi’s mirrors are put will spread and therefore cannot produce as razor-sharp a beam. This projection is in the shape of the mirror which therefore becomes both light source and ‘cutter’ or ‘gobo’. Lerski is reputed to have mounted his small mirrors, up to sixteen of them, on music stands to enable a fine degree of control.

Here are my own efforts using the mirror-beam effect; relatively easy for a still life. For Lerski and his models the exercise would have required intense concentration; the sun keeps moving! 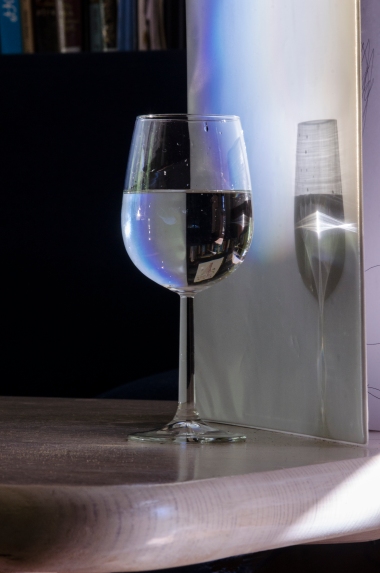 In 1932, Lerski emigrated with his second wife Anneliese to Palestine, where he continued to work as  photographer, cameraman, and film director on his 1935 productions Hebrew Melody (a short drama) and Avodah (a documentary short). During the 1930s, in an extensive project, he portrayed both Arabs and Jews in Palestine which can be seen in full at The Israel Museum, Jerusalem. With this series Jewish Faces, Helmar Lerski opposed his adopted country’s aryan ideal to set forward a manifesto for tolerance. He photographed Israeli soldiers and Arab peasants using the same technique. 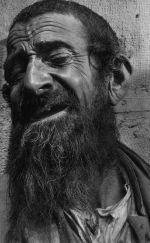 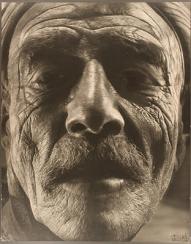 Lerski is most radical in his work Metamorphosis, completed within a few months at the beginning of 1936 in Palestine using the very large negative format of 10×12 inches. In Verwandlungen durch Licht (‘Transformation by Light’, the alternative title for this work) Lerski realises an ambition to metamorphose one subject into multiple entities, declaring; “In every human being there is everything; the question is only what the light falls on”.

His variations on his model, the 24-year-old Swiss-born, and at the time out-of-work, structural draughtsman and athlete Leo Uschatz,  estimated at between 140 and 200 differently lit shots, thus depicts “hundreds of different faces, including that of a hero, a prophet, a peasant, a dying soldier, an old woman and a monk from one single original face”, as Siegfried Kracauer, German writer and critic, put it.

Contrary to the conventional idea of the portrait as a likeness, according to Lerski these pictures were intended to provide proof “that the lens does not have to be objective, that the photographer can, with the help of light, work freely, characterise freely, according to his inner face.” 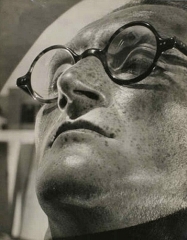 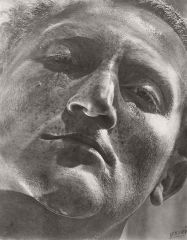 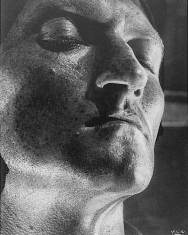 Metamorphosen was not published until 1982, well after Lerski’s death in Switzerland in 1956. Its contribution to Modernist photography has since been recognised after many decades in which Lerski’s work remained obscure. A collection of the photographs from Kopf das Alltags was offered at a gallery recently for $1.5M.

Miriam Böhm opens a show tonight at WNTRP, Potsdamer Strasse 91, D-10785 Berlin 6–9 pm which continues to 13 April. Like Lerski, she is fanatically precise and also works in variations.

Here she is having a good laugh at our puzzlement with the director of ratio3 at which she frequently shows, Kent Baer. It takes some looking to unravel a Böhm work. She has recently moved to showing sculptures, mirrored, semi-mirrored and clear glass in bisecting frames with  digital photo print strips of faux woodgrain adhered in various skewed geometric formations of rectangles and rhomboids. The works overlap, reflect, conceal, reveal and conjoin the linear forms on different layers in the work as the viewer circles them. They are not unlike the illusions presented by the cinematographic Schufftan special effects process above.

In effect these are 3D formulations of the photographic work she has been exhibiting since 2001 after studying at the Academy of Art in Vienna and the Rijksakademie van Beeldende Kunsten in Amsterdam. Her acutely self-referential pictures are constructed from 3D objects by way of a rather involved circular process. The artist first neatly arranges and photographs the simple objects; she then prints the image and places the photo in another composition, photographing the new arrangement yet again. These “picture within a picture” configurations confound the viewer’s experience of seeing by presenting disorienting perspectives which we cannot resist trying to disentangle from the puzzle they present. 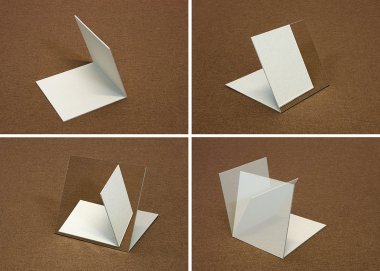 We believe at first glance that we are looking at straight photographs of folded paper, only to find on closer inspection that they cannot be. 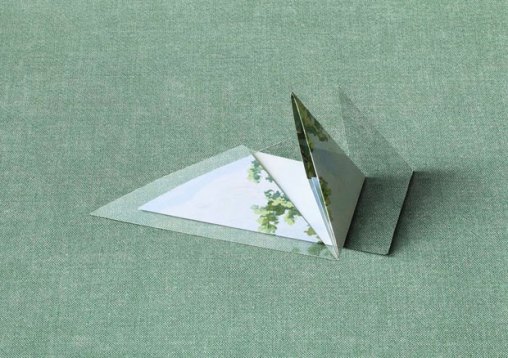 In each image, we see the folded object shadowed by the green fabric it sits on, like a double-exposure, though it is not. In the re-photograph each previous image appears to create tonal ‘ghosts’, since in the reproduction of the original tones is compressed or shifted;  pure white may become grey as the background colour is matched.

Spatial relationships are shuffled, especially of the figure-ground correlation. Perspective is skewed, then skewed again as further copies are made and the prints themselves folded, generating a perceptual origami of the viewer’s comprehension.

Confected from documents of objects in space, these photographs are objects in turn, and yet remain a flat surface. Böhm dubs her variations ‘irritations’. They certainly are! When I look at them, I hear Philip Glass.

One thought on “February 18: Variation”