The scene of this somewhat overexposed photograph, a family picnic on the dunes in bayside Melbourne, though more than a century old, appears not unusual.

The girl in the foreground, judging by her expression, is about to complain; “Eeew…sand – wiches!”, and despite a general wearing of hats, squinting expressions and lank hair indicate sultry overcast weather making the outing less exciting than anticipated.

However, there is drama beneath appearances played out among the group on the left between the married artists Ethel Carrick Fox (1872-1952) in the floral straw hat and Emanuel Phillips Fox (1865-1915) and Irene, wife of the photographer, with her baby. Ethel is visiting Australia for the first time since her marriage to the Australia painter in 1905 back in Ealing, an event reported with just a mention in one Australian newspaper, but that was attended by eight of the Fox, and six, plus children, of the Phillips families, and others from the British and Australian art worlds including Rupert Bunny, Frederick McCubbin, Violet Teague, Bertram Mackennal, Tudor St George Tucker, Algernon Talmage, Bernard Hall, George Clausen, Arnesby Brown, Julius Olsson, Louis Grier, W. H. Y. Titcomb, George Lambert, John Longstaff, Tom Roberts, Hilda Fearon, Fred Appleyard, Percy Harris, Julius Olsson, Charles Coulthurst, amongst 150 guests, many of whom traveled from Australia, combining their attendance with a European holiday. The couple moved to Paris and remained childless perhaps out of choice;

“My marriage,” Carrick said, in an interview on their return visit to Australia in 1913 “has never made any difference to my work, and instead of losing my individuality I have developed it…I think one reason why we work so well together is that we always put our art before everything else. That comes first, anything else, after.”

In the photograph, however, they are separated by a figure of attentive maternalism; of Irene cooing at her baby. Once back in Paris Emanuel painted his wife, in the same position, into a similar scene though in this case, instead of the Melbourne beach with its hot winds and flies, the setting could be in their purpose-built studios at the Cité Fleurie (‘Flowered Place’) at 61-67 boulevard Arago in the 13th arrondissement. The model for the mother in this work is most likely the red-haired and green-eyed Queensland artist Edith Anderson, 13 years his younger and who married Penleigh Boyd (one of our Boyd artist ‘dynasty’) two years after this painting was done.

She also served as the model for the mother tending to the towelling-dry of her daughter in his two versions of ‘Bathing Hour’; one in Castlemaine Art Museum which is looser and more impressionistic with figures shown in shade against a brightly sunlit background; and the other, in the Queensland Art Gallery, worked up in a more finished academic style, of muted contrast and with sunlight glossing the woman’s red hair. 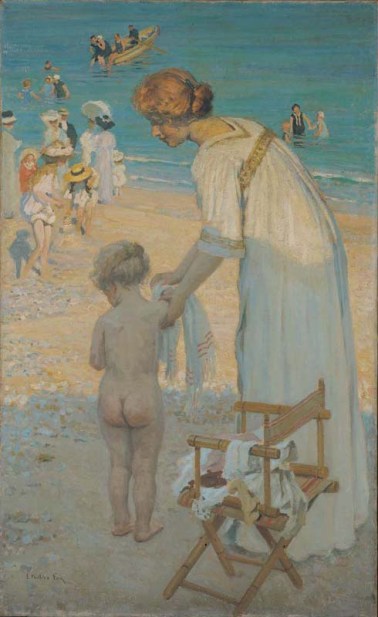 Intriguingly, there was another photographer with the surname Fox, unrelated as far as I can tell, making pictures in Melbourne and on its beaches at this time.

Arthur Fox was born in Castlemaine in 1866 and ran a general store on Flemington Road. He captured this scene of children paddling at Beaumaris, along the coast toward Melbourne from where David Fox made his family snapshot.

Arthur processed his pictures as a lantern slide for the entertainment of family and friends. As Elizabeth Hartrick recounts in her essay “That’s Me Up There” in Anne Maxwell and Josephine Croci’s Shifting Focus: Colonial Australian Photography 1850-1920, Arthur’s son, Elton Frederick Villiers Fox (1892-1970) also took advantage of emerging photo technologies that were making the medium accessible to even someone as young as he, only 12 years old when he enthusiastically recorded a flood in Flemington, and who continued to carry his Kodak with him on family outings, the results of which now reside in the collection of the State Library of Victoria as a vivid representation of middle-class Edwardian Australian family life.

His scene of children paddling shows a society far more casual than that recorded in en-plein-airimpressions by Emanuel and Ethel in France, of the well-to-do under their hired tents on the beaches of Royan, Dinard and Trouville where more strict social codes prevailed; a discreet display of one’s high fashion was de rigeur and getting wet was a secondary consideration and practiced, out of modesty, by the men on their own.

In both images that open this post, Ethel Carrick observes the motherly scene from the most comfortable seat, aloof, and in the candid and unvarnished photograph, can be seen to ignore Irene quite pointedly, speaking intensely to Emanuel across her, when he has clearly chosen to perch next to Irene rather than to sit on the bench next to his wife who has prepared her comfort by laying out a newspaper to sit on. Emanuel’s gaze is divided between the two; the tender spectacle, and his intense partner.

Also Fox’s Jewish family, though they did not practice the religion, were jealously proud of their famous artist, and, according to some accounts, regarded Ethel as an outsider, a mere dauber, and rankled at her lack of domesticity.

Ethel, like Irene and Edith, exemplified Fox’s physical ideal of femininity, and he painted such a woman before they met, and yet encouraged Ethel’s art-making rather than expect her to pose as his model, as did Jeanne Morel for their contemporary and close friend Rupert Bunny.

Ethel appears in a portrait by the May and Mina Moore studio made sometime during her second visit to Australia 1913-1916. The artist couple were formidable self-publicists and over the span of those years 20-plus articles appear in Australian newspapers and magazines on their exhibitions in Paris, with solos and a joint show in Melbourne, and Ethel in exhibiting solo twice in Sydney. Emanuel was to become fatally stricken with lung cancer in 1915, while Ethel had moved away from his troublesome family to quarters in Sydney with Theosophists, whose philosophy she started to embrace and which supported her in the distress of her bereavement (she tragically arrived at Emanuel’s deathbed in Melbourne just after he had slipped into a coma).

Born in New Zealand, the sisters Moore were amateurs who out of love for the medium and in a daring move, bought a studio in Wills St., Wellington (which May had previously rented to paint portraits) and hastily learned professional photography from the departing staff. At the urging of Hugh Ward, an American-born actor and theatrical entrepreneur, and the immensely popular Australian actor Julius Knight, May then came to Australia to see if she could duplicate their success here, taking a room alongside the offices of the weekly magazine, The Bulletin, before moving to a studio in George Street, adjacent to the city’s most important theatres, including the Grand Opera House.

They eschewed Victorian-era props and painted backdrops and instead posed their subjects simply by window-light in front of a back-cloth, to create their much-admired (and oft-imitated) ‘Rembrandt’ effect. That is their procedure for their portrait of Ethel Carrick holding her palette, in which her renowned elegance of posture and aristocratic demeanour is tempered by a gentle, meditative concentration. Because the print is stamped on the mount “May and Mina Moore”, it is impossible to tell if Ethel was photographed by one or the other sister in either of the two studios they operated for two years, one in King Street, Sydney run by May, or that in J. and N. Tait’s auditorium in Collins Street, Melbourne, which Mina managed.

The Moore sisters’ clientele in Melbourne was from the theatre including the Quinlan Grand Opera Company and pictures were published in Home, and the arts and literature magazines Lone Hand and Triad, the latter publishing a profile of May by “M. G.” under the heading A WELL-KNOWN PHOTOGRAPHER;

“Yes, I think photography is decidedly a calling well suited to a woman, especially if she has imagination, and plenty of perseverance.” That is the opinion of Miss May Moore, the well-known photographer, of Boomerang House, Sydney. “You see, there is a great deal of delicate work, such as re-touching, which women do better than men. Of course to make the business a financial success, one requires some commercial knowledge; but that is soon gained by experience, which is after all the best teacher.” Born in New Zealand of an artistic family, Miss Moore at an early age showed signs of unusual ability, both as a portrait painter in oils, and also as a miniature painter. She owes the fact that she is a photographer to chance. The studio in which she and her sister were working was given up by the proprietor, and it became necessary for them to find other accommodation. As that was a difficult matter, they decided to buy the studio and continue the business of the photographer. Having made a great success in their home land, a move was made to Sydney, and Miss May Moore is now recognised as one of our leading photographers. As you chat to Miss Moore, who is tall, and fair, you realise that she possesses in an unusual degree artistic ability and business aptitude, which are perhaps not commonly found combined in the same person.

A corner of Miss Moore’s new studio is shown here; you will notice the artistic arrangement, though of course the fine color scheme cannot be appreciated in a mere black and white picture. To an educated woman possessed of the right qualifications, photography presents a fascinating career; and though from the outside the work seems easy, anyone taking it up with this idea will be speedily disillusioned. It takes hard work as well as ability to succeed as Miss May Moore has done.

At the end of 1916 Mina married William Tainsh, a poet and executive of an oil company and in 1918 gave birth to the first of her three children. Just as Ethel Carrick may have feared, family needs then took precedence over art:

“I had to choose between caring for a baby daughter and paying someone else to do so while I went to business ….”

She sold her Melbourne studio to the Melbourne portrait and fashion photographer, the Pictorialist Ruth Hollick and moved to Warrandyte where she associated with artists, associates of Carrick; Clara Southern, Jo Sweatman, Penleigh Boyd and Jessie Traill. Mina died aged 75 in 1957.

We pride ourselves on living in a liberal society, but the independent and successful careers of these women, Ethel Carrick, Mina and May Moore, and Ruth Hollick, on an equal footing with men in the period of the nine-teens, reveals that because of two world wars equal rights and opportunity for women was set back, and might have advanced far sooner and more permanently.