December 10: Necessity, they say, is the Mother of Invention. But sometimes it is engendered by Question, and sometimes it springs from fateful Fantasy.

One day in 1943, the story goes, Edwin went out for a walk with his 3-year-old daughter, Jennifer, carrying his Rolleiflex and taking pictures of her. At the fireplace in their Santa Fe resort afterward, she asked him plaintively: “Why can’t I see the picture now?”

Though this sweet fable has never been confirmed by the daughter Jennifer, it is certain that the question was asked, whether by her or by Edwin Land himself, and it set in motion a series of imaginings of how such a thing could work, and led eventually to a product so popular that its success is compared to that of the iPhone.

“How could the chemicals be contained in the camera?” Land wondered, no doubt thinking of those street photographers one could still encounter during the war. Their cumbersome tripod-mounted cameras doubled as darkrooms with sleeves attached (like a film-loading bag), so that the developing could be performed in the darkness inside to produce a (rather damp) picture in minutes.

Maybe, he imaged, the chemistry could be enclosed in little packets to be spread automatically on the film, perhaps even rolled up with the film itself. Then, if that worked, perhaps the negative and positive could be processed simultaneously somehow. But then what would one do to neutralise the silver, since the developer and fixer would have to be kept separate or they would neutralise each other?

At the same time as these notions were being trialled in his head Land already was starting to worry that someone else must be thinking of the same idea; a not uncommon paranoia amongst inventors.

Luckily his patent lawyer, Donald Brown was also on holiday in Santa Fe and together they put the concept in writing that evening “…in a few hours,” remembered Land, though the details “took from 1943 to 1972 to solve.” From then on, every step of development of  SX (‘Special Experiment’) 70 was recorded for the patent lawyers, signed, witnessed and filed, by his “girl assistant” Eudoxia “Doxie” Muller.

The record begins on today’s date, December 10, in 1943 in a handwritten disclosure by Polaroid’s executive Richard Kriebel:

On December 10 , 1943, at his home, Edwin H. Land disclosed to me a novel self-developing film which when mounted in a camera of novel construction is adapted to produce a positive print shortly after exposure.

It was Maxfield Parrish Jr., son of the well-loved illustrator, who progressively made test prototypes from his sketches of the designs, and the record of December 17 reads;

The camera is provided with … means to pierce or break by compression the sacks or containers of developer. The film is then advanced through the camera through a sufficient travel to ensure development of the exposed frame.

By December 23, a colleague Frederick Binda records (in contradiction of the myth):

On December 13, Mr. E. H. Land called me to one side and said he had a secret to tell me. He said that for years he had been toying with the idea and dreaming about a new photographic camera in which you simply photograph a subject and from that same camera rolls out a finished picture. He told me that he now knew how to make such a camera. 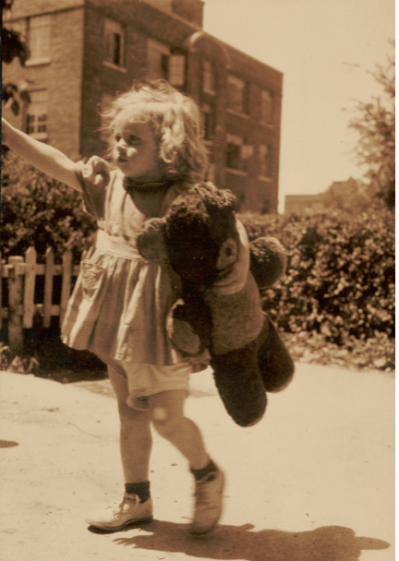 That December, Doxie Muller saw the world’s first Polaroid instant picture, albeit in bright yellow, and later versions in blue-and-white, though most often, in brown. The problems were to take another four years to resolve.

The Model 95, the first of Edwin Land’s instant picture cameras and distinctly late Art Deco in design, came into production in 1948, selling at $87.50 or $921.83 in today’s money, with each shot costing $1, the equivalent of $10 now. Despite the steep price, the novelty of instant pictures was so appealing that the Polaroid Corporation in Rochester made at least 1.5 million of the Model 95 folding viewfinder camera for the peel-apart black-and-white Polaroid film (of which some of us still have memories).

You’ll have heard of cameras, just was wonderful, that fit inside a cigarette lighter, the handle of a walking-stick, a tiny book, or even a pen; many such were devised in the days of espionage and you see them in the thrillers of the 1930s and 40s, and they appeared even much earlier, built inside bowler hats, for example, as a novelty for shy or clandestine photographers.

Only flights of romance, nostalgia or fantasy could account for their re-invention in the 21st century, and indeed that is how Marek Mazur (1951–2015) accounts for his fascination with such follies;

Building them has been my passion since my youth when I pressed a camera shutter for the first time. My works, usually, in addition to the basic and obvious function of the camera, have the qualities of everyday objects, I also try to imbue them with the beauty of those cameras from the beginning of photography.

Born in Staszów, a small town in today’s Świętokrzyskie Province, Poland, in 1970, Mazur graduated from a vocational school and a mechanics institute and left for Gdańsk as a 19-year-old. There he stayed with his aunt, leaving behind his younger brother, Andrzej who still lives in Staszów. Their father’s father was a carpenter and a blacksmith, and their maternal grandfather was also a smith. At twelve Mazur assisted another Staszów blacksmith who made razors. Then as a technical high school student, he played electric guitar on his own hand-made instrument and also played the trumpet, the saxophone, the violin, and harmonica. Even while in Staszów he had become interested in photography, collected old cameras, and joined the school photography club.  In Gdańsk, he worked for about 20 years as a teacher in a now-defunct vocational school in Brzezno known for its training of jewellers.

Given the low salary of teachers in Poland in those days, and with a family to support, Mazur decided to become independent and established ‘Galeria Retro Camera’ at Chlebnicka 43/44, 22-100 Gdańsk at the beginning of the 90s to make a living by repairing cameras and lenses, and making complex customisations of specialist photographic equipment. Able to fix anything, he was able to reconstruct parts that were missing, and sometimes improved on the original designs. One day at the end of the seventies, a camera-collector friend said that he was in Warsaw and had seen at a museum a camera disguised in a ring;

I figured I could do it too. After three months I won the bet. I thought it would be a one-time adventure, but when the ring was sold,  I had money to support the family. I’m not a materialist, but it was hard times, and for that money I could buy a washing machine, so with pain I parted with the ring.

So began what was to be a more than 30-year inspiration that produced around 40 miniature cameras, which he constructed and finished on his own, from the beginning to end, and every tiny part of each. After the camera in a ring came one fitted into a lighter, then a walking-stick, a knife, a brooch, a pipe, a tie clip and even cuff-links. Even someone uninterested in camera hardware, including me, can appreciate these as curiosities at least, even as fine sculpture or jewellery. He no longer sold them, depending instead for his income on his expert ability to resurrect old or worn cameras, though his relatives and friends were sometimes blessed with a gift. 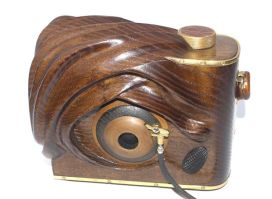 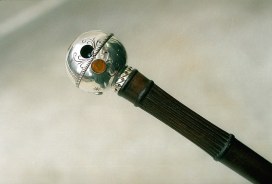 His only regret was that he was not able to make the lens for his cameras himself, but eventually he discovered a lump of polished amber ideal for the purpose. Why amber? He maintained that it was the closest substance to the wood that he used to make the body of the camera, being the hardened, fossilised resin of 40 million year old trees—araucarias of the genus Agathis— left behind by an extensive forest once growing in today’s Scandinavia during the warmer era of the Eocene,  when temperature the poles may have been as high as 20°C. Amber has been long associated with Poland with the substance being found in the soil, left there by retreating glaciers, and in 1480, the guild of amber craftsmen was founded in Gdańsk. The camera body is entirely of wood; the housing is made from the remains of the original hull of the sailing ship “General Zaruski”, and even the little bow which is the winding and shutter-cocking spring uses no metal. 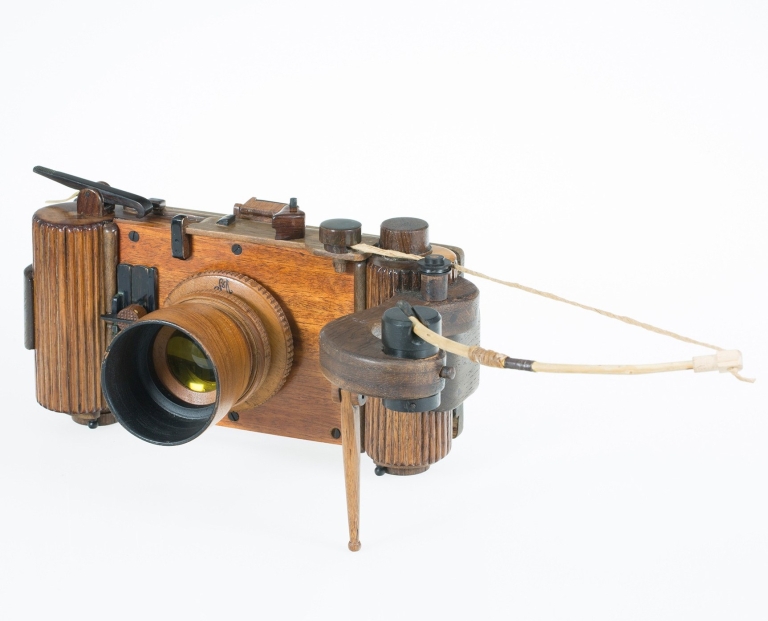 With no instructions on how to make such a lens, he built a spherical counter-surface, to which he adhered, with vegetable glue, fine abrasive papers with which to grind the shape. The resulting lens is a 60 mm with an image circle suited to 6×6 cm film, though it was first tested on a Panasonic Lumix digital camera.

He took the first photo alone; a still life in the kitchen in which an ordinary basket was transformed into an impressionist painting. A little disappointed with the result, he decided to persevere with the rather mystical qualities of the lens, its golden tone, unique refraction index, and the inclusions in the amber which threw unusual halations around highlights, resulting in a soft, warm image.

The wooden camera for the amber lens was the last piece made by Marek Mazur, and is his most inventive—to call it ‘Steam-Punk’ would be to ignore its jewel-like, but timber, construction. The refurbished General Zaruski was due to sail on the Motława in full sail, and the maker wanted to photograph it with a new camera fitted with the amber lens, a symbolic christening. Though his dream camera was complete, Marek Mazur did not live to realise his ambition; he died suddenly, on May 27, 2015, in his studio.