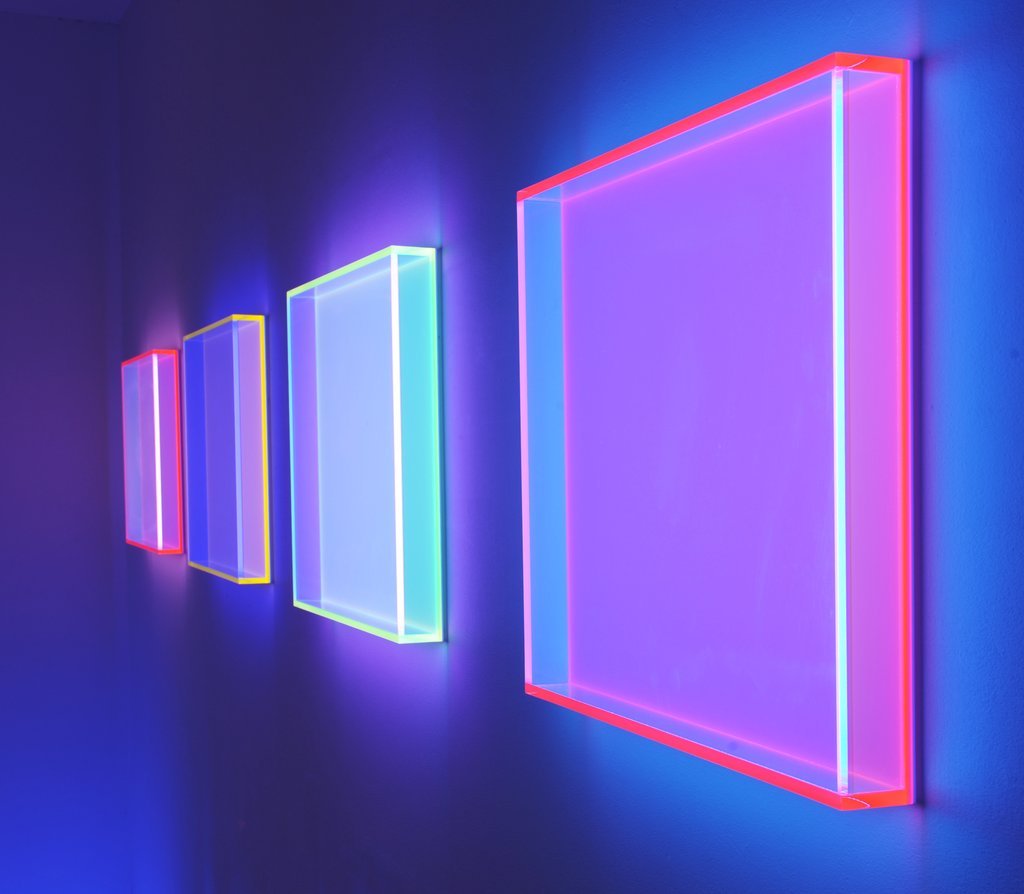 When is what is not a photograph, a photograph? That tangled question of what actually is essential to our medium has always been moot, given its shape-shifting across a range of technologies.

Ethereal work, by concurrently exhibiting artists Ann Veronica Janssens (*1956) and Regine Schumann (*1961), provides an answer. Originally from Folkestone, England Janssens now lives and works in Brussels, Belgium, showed here in the 18th Biennale of Sydney of 2012, and is currently exhibiting at Baltimore Museum of Art, Maryland 30 May – 31 Oct 2018.

Both artists present artworks which respond to, and transform, light, which is the very essence of photography.

Janssens grew up amongst the small European population in Kinshasa, capital of the Democratic Republic of the Congo. With few of her early years spent in formal schooling, she attributes her inspiration to her idleness as a child:

It’s the time of idleness that allows us to observe and discover other phenomena, to decipher that other reality.

She recreates the luminosity of the atmosphere of her home country (so vividly treated in Richard Mosse‘s war photography and Guy Tillim‘s photojournalism) in immersive, walk-in installations in which the very air is recruited to conduct colour.

Regine Schumann studied at the University of Visual Arts in Braunschweig Braunschweig under the professor and painter Roland Dörfler (1926–2010), himself a German prisoner of war, whose work during the period represented people as lonely, weak, desperate and constrained inside, or moulded into, closed geometric forms. It is not too far fetched to say she also inherited from Dörfler a fascination with colour, but further refined and abstracted it by recognising the transformative power of light in the experience of colour. The result is an ineffable luminosity.

Schumann constructs simple boxes and tubes from industrial materials. Ranging from series of simple freestanding acrylic boxes to boxes jutting out from the wall, groups of parallel panels, and monumental slabs.

In daylight, the viewer’s perception of the transparent and opaque surfaces in each work shifts playfully with the angle of view. The acrylic is coloured with fluorescent dyes, and their glossy surfaces distortedly mirror other works and the architectural environment of the space in which they are displayed. The hue of the reflected surroundings is shifted in response to that of the acrylic material. Joints at the sides of the boxy structures combine the different colours of the two adjoining surfaces to create a distinct outline that appears to glow.

The translucent material, like optical fibre, efficiently conducts light by reflection between the walls of the sheet in an effect that was exploited as early as the 1930s, particularly in those edge-lit foyer signs that can still be seen in old theatres, and most famously in Medgyesi László’s (aka Ladislas Medgyes) 1930s design for Helena Rubinstein’s lucite bed in which she was photographed by Herbert Gehr for LIFE magazine.

Taking us back to the darkroom, under black light, Schumann’s sculptures radiate a glowing outline and surfaces seem to dissolve. We are made especially aware of the emptiness and non-figurative nature of these boxes because of their familiar form; that of museum vitrines. They are in effect minimalist sculpture turned to the purpose of describing light.

The material I use glows as soon as it receives light energy, be it in the form of natural daylight or artificial light. Depending on the location, the different coloured panels result in a transmission, merging, mixing and selection.

Schumann has had solo exhibitions in Europe, Canada, and the US and her work is collected by institutions including the Kunstmuseum Celle in Germany, the Rheinisches Landesmuseum in Bonn, Germany, and Stroom Stiftung Den Haag in Netherlands as well as by private collectors worldwide for many of whom her sculptures are a desirable addition to their interior design.

The older of these two artists, Ann Veronica Janssens, also employs the museum showcase format, often filling the empty space with liquids that refract light at different angles to create an illusion that the cubic form has been segmented into slabs with razor-thin slices. 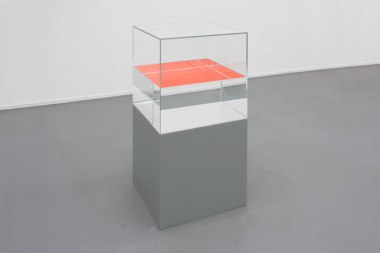 My projects are often based on technical or scientific facts. The resulting plastic proposition is then akin to a laboratory revealing its discoveries. Cognition, reflexes, meanings and psychology lie at the heart of these experimentations.

These are objects, rather than images, that remind us of the volume of the image that enters the dark void of the camera in which film, or a sensor, is waiting to capture a slice of what is a three-dimensional image projected by the lens, not merely a plane. Janssens extends this idea beyond the object into installation works that surround the viewer with an atmosphere that they experience inside a still larger box.

Janssens says of this work;

Blue, Red and Yellow, 2001, is the first autonomous sculpture to formulate this concept. This pavilion, measuring 9 x 4.5 x 3.5 metres and installed on the terrace of the Neue Nationale Galerie Berlin, let itself be seen – by virtue of its proportions – as a sculpture in the context of Mies Van der Rohe’s building, whereas inside the experience of the space seemed distended.

The translucent walls of the pavilion were covered with transparent films in blue, red and yellow. A dense mist pervaded everyting. And this coloured mist in which the spectator wandered was modified according to his or her position in relation to the proximate colour. The colours fused at the intersections, and the spectator advanced into a dematerialised coloured abstraction.

Janssens’ wall pieces however are closer to what we think of as a photograph, though they are still interactive, but more as a mirage is, requiring the viewer to approach or retreat to appreciate their effect. These panels, such as Magic Mirror (Blue), 2012, are made of three layers and in some, iridescence is created by a dichroic polyester film between the sheets of glass. Dichroic filters allow light to pass selectively, limiting its reflections to a particular range of colours. Light transmitted through the sheets is often counterintuitively of a different hue than the glass, so that Magic Mirror (Green), below, projects a pink glow onto the white gallery wall.

In others such as the Magic Mirrors of 2015, the work consists of two parts, each of which is made of three layers of glass. Between two intact panes, the sandwiched central pane has been shattered. A pattern appears to originate from the centre of its upper edge, promoting a sense of cascading motion as the work is approached.

In Gaufrette (Pink Shadow), 2015, below, the glass is annealed with vertical and horizontal lines; the one facing the back with a pattern of narrow horizontal grooves, the one facing out with a pattern of narrow vertical furrows, and interleaved with a dichroic polyester filter, thereby creating a combination of linear pattern and slight iridescence.

While the works of Janssens and Schumann are not photographs, they prompt us to consider the ways that our medium might present as object, rather than as image, and in an age when photography is being constantly morphed by the digital revolution, to look forward to the potential for interactivity with audiences.