Photographs of children evoke an idyllic period in our own lives, or that of our daughters or sons, but they also may uncover the ugliness of a childhood corrupted.

In my quest to gauge the impact on our medium of the mid-century exhibition The Family of Man, and reasons for its success and the polarisation of its critical reception, I am completing biographies of each contributing photographer, publishing them on Wikipedia for ease of access (and for editing or expanding) by anyone interested in such issues.

The research uncovers some little-known, out-of-fashion or forgotten photographers and amongst these is Belgian photographer and musician, Charles Leirens (1888–1963), an article on whom I have just uploaded. His photograph selected by Edward Steichen for the traveling MoMA exhibition and seen by 9 million visitors worldwide, was atypical of his output.

The shot comes from a series made in Tangiers of older girls, perhaps eight or nine who are arranging stones on the street in order to play house with their younger siblings. We see the construction progress in Leirens’ series made on his Rolleiflex, and it’s clear from the gradual appearance of more stones that Leirens stood for some time photographing, ignored by all but one child in the first frame of the set.

It is easy enough to take pictures surreptitiously with the waist-level twin-lens camera. By aiming its lenses to the side and standing at right angles to the subject one can appear to be intent on something elsewhere, and besides, framing and focus requires looking down into the ground-glass, which itself helps to put the subject at ease about your intentions.

Judging by the tilt in shot 2 and the rather off-centre framing in shot #3 this is likely Leirens’ procedure. The relation of the opening above the awning carrying the ‘Shell’ sign doesn’t change despite the long shooting session, so its probable that the camera is mounted on a tripod. 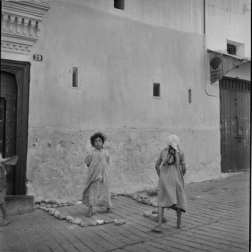 The chosen photograph is cropped to ‘ideal format’ (i.e. to fit exactly on an 8″x10″ print), removing the ‘Shell’ sign and the house number and doorways from left and right so that we are left with an impression of conditions more primitive, and perhaps therefore more ‘authentic’ and ‘ethnic’.

In the exhibition it was displayed with other joyful images of childhood on a coloured pole in the New York installation as a ‘flag’ (detail below left), accompanied by a quotation from Shakespeare’s As You Like It; the scene in the forest when Celia, hiding there with her cross-dressing cousin Rosalind whom she loves more than anyone, discloses that it is Orlando who has been writing love poems to Rosalind on the trees. Steichen in effect turns the words of Celia “O wonderful, wonderful, and most wonderful wonderful! and yet again wonderful” into a paean to childhood and an idyll of childhood friendship (parents do not appear in the section of the exhibition). But as apt as Shakespeare’s lines may be in reference to amorous writings on trees,  As You Like It carries complex erotic overtones surely not lost on a 1950s audience steeped in The Bard.

Lierens is an intriguing individual who achieved some prodigal success as a pianist, performing publicly at age 8, and his intelligence can be assumed from his early entry into a law degree while simultaneously learning to compose music.

The philosopher Gaston Bachelard, no intellectual slouch himself, and whom Leirens photographed in 1958, described him in a letter of January 20, 1960;

Only two years ago an art photographer, a very nice man, came to my house to take pictures. He is a Belgian. (…) A man full of spirit, of a great literary culture I liked very much. (…)  This is the great portraitist Charles Leirens. How many other such invigorating artistic encounters is one to have?

Leirens’ meetings with such luminaries as Bachelard were the result of his musical career, not so much through performance, though he continued to play throughout his life, but because of the administrative roles which he took up; as the first Director-General of the Palais des Beaux-Arts, Brussels in 1928, then when that was successful to the point of removing him from the direct interaction with musicians, he set up Belgium’s Maison d’Art in 1933.

Our photograph of the ‘happy families’ game is on the face of it an odd selection by Steichen, given that any of Leiren’s portrait subjects might have provided examples of the heights of human endeavour. But it clearly fits the agenda of an exhibition intended to nurture tolerance by showing all people everywhere, and especially children, to be the same under their skin; this game of ‘house’ is played in tree houses or in backyards in other countries in Family of Man pictures, including one be Steichen himself of his own children.

Leirens took his photograph in Morocco during his drawn-out return to Europe from the United States where he had been given refuge during WW2 in the New School for Social Research, New York, in return for giving courses in photography (teaching alongside Lisette Model and Berenice Abbott) and musicology, and where he wrote books on Belgian music and folklore.

But the obverse to his impression of benign play of children in the street occurs elsewhere in Leirens’ imagery of Morocco of his period in residence before 1952 when he returned to France and married the mistress Virginia Haggard (McNeill) of Marc Chagall, whom he photographed that year (in addition to portraits he made of him on a return visit to the USA in 1948).

As Michael Haag recounts in Alexandria: City of Memory, author Lawrence Durrell (1912-1990) was convinced by the BBC to return to Alexandria with a film crew. Durrell’s wartime posting in the British Information Offices in Cairo and Alexandria in Egypt led to his masterpiece, The Alexandria Quartet, which he completed in southern France where he settled permanently in 1957. There, for the camera, he tries to retrace his steps in the city where he had come upon a scene which for my teenage self was a shocking revelation.

The scene upon which we intruded was ferociously original, if for no other reason than that the light, pushing up from the mud floor, touched out the eyebrows and lips and cheek- bones of the participants while it left great patches of shadow on their faces – so that they looked as if they had been half-eaten by the rats which one could hear scrambling among the rafters of this wretched tenement. It was a house of child prostitutes, and there in the dimness, clad in ludicrous biblical night-shirts, with rouged lips, arch bead fringes and cheap rings, stood a dozen fuzzy-haired girls who could not have been much above ten years of age; the peculiar innocence of childhood which shone out from under the fancy-dress was in startling contrast to the barbaric adult figure of the French sailor who stood in the centre of the room on flexed calves, his ravaged and tormented face thrust out from the neck towards Justine who stood with her half-profile turned towards us. (…) On a rotting sofa in one corner of the room, magnetically lit by the warm shadow reflected from the walls, lay one of the children horribly shrunk up in its nightshirt in an attitude which suggested death. The wall above the sofa was covered in the blue imprints of juvenile hands – the talisman which in this part of the world guards a house against the evil eye. It was the only decoration in the room; indeed the commonest decoration of the whole Arab quarter of the city.

What Leirens found in Morocco is not as lurid as Lawrence’s fiction, but his shots of a boy prostitute are as disturbing. The boy sits on the sill of a low barred window.

The hand on the bars (below) is that of a girl outside whom we see in the adjacent shot on the 35mm roll, while the boy’s garment appears on the left edge of frame, a reminder of the “small figures dressed in white soiled robes, like defeated angels” of which Lawrence writes of other child prostitutes in Mountolive.  The boy’s expression is not a smile as it may at first appear but a clenched grimace (right, below), and his hand gesture is nervous. 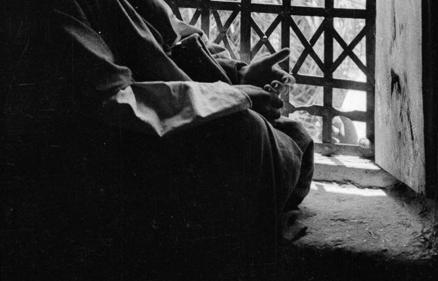 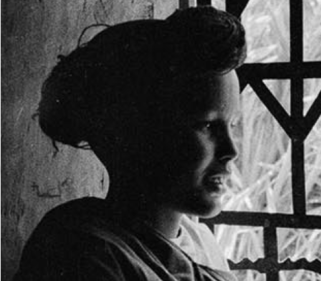 The girl, who stands stiffly at Leirens’ direction, wears the tatooed markings of a young Berber woman; the ‘siyala’ on the chin and the  ‘ghemaza’ between the eyes, both of which would be augmented as she grew older. Her status, whether she too is a prostitute, not clear, and neither is Leirens’ motive in making these photographs; I can find no instance of their use in any publication and they are nowhere online other than at the Musée de la photographie à Charleroi. Northern Africa was in the mid-century to certain European men as South-East Asia is to some Australians; an unrestrained playground for their perversions, and their corrupt use of children may be what Leirens intended to expose.