September 27: In the digital age we tend to forget that the origin of the word ‘manipulation’ is from the Latin manipulus ‘handful’.

Two artists whose anniversaries occur on this date apply their hands to the photographic medium. Pol Bury (*1922) who died on this date in 2005, was a Belgian sculptor who started out as a painter in the Jeune Peintre Belge and CoBrA groups, but who also turned to photography, while French photographer Jean-Pierre Sudre, inventor of the Mordançage technique, was born in Paris September 27, 1921 (†1997 in Aix-en-Provence).

In 1962 Bury started to make a series of photobased works called cinétisations, a neologism that itself is montaged  from the prefix ‘ciné’, which signifies movement and which he turns into a noun with the suffix ‘-isation’; thus meaning ‘images in which movement has been applied’.

To do so, he intricately cut photographs of architecture and works of art into thin strips and concentric circles, that he then reassembled almost seamlessly. The resulting collages give the mighty, static structures a new and eccentric energy so that they appear animated, weaving, bending and gyrating, even twisting into delicate arabesques.

He made the “cinétisation” above of the Richard J. Daley Center (which was from 1965 to 1969, Chicago’s tallest building) when he was teaching in Chicago in the late 1960s.

His operations were not limited to photographs but also included prints of famous and obscure artworks, and in the above print, originally an engraving accompanying lesson in perspective, he interrupts the order of the pavimento, the vanishing points and orthogonals by cutting four series of concentric incisions, shifting them subtly so that the door frame wobbles and the spiral staircase weaves and bulges treacherously, while the intersection of stairs on the right becomes unnavigable. To look at a 1999 sculptural work, Volume Miroir – M.B, is to see these disruptions developed into three dimensions and extended into a likewise illusory space though the use of a mirrored steel surface.

His gyrating forms are not created for mere effect, but are founded in a philosophy that developed and evolved from the beginning of his career, when at 16, in 1938, he began studying art, painting and drawing at the Academy of Fine Arts in Mons. There he met the Walloon poet Achilles Chavée, a guru of Belgian Surrealism who invited the young man into the surrealist group Rupture which he founded in 1934, where, influenced by Yves Tanguy , Bury took up the group’s communist ideology and painted his first surrealist paintings.

He wrote in 1940 for René Magritte‘s and Raoul Ubac‘s magazine L’Invention collective (above), and participated in the International Exhibition of Surrealism in 1945, but the following year his work became more abstract and, after a disagreement, he left the Belgian surrealist group to join the Young Belgian Painters, then when that dispersed in 1948 he entered the more revolutionary Surrealist group founded by Christian Dotremont and Joseph Noiret in 1947, which soon merged with CoBrA. Until 1951, he contributed writing and illustration to the journal Cobra and participated in their group exhibitions.

It was in 1950 that a visit to Alexander Calder‘s show at Galerie Maeght encouraged his interest in sculpture and, based on his admiration of Piet Mondrian, he founded Art Abstrait in 1952 after which he gradually abandoned painting for his first plans mobiles (‘flat mobiles’); panels whose appearance depends on the viewing angle (right). Subsequently, from 1955 works by Pol Bury are ‘kinetic’ sculptures. The English term, derived from the Greek, might carry, if turned clumsily into ‘kintecisation’, much the same meaning as Bury’s invention cinétisation, and the French term for ‘Kinetic Art’ is Art cinétique. Though static, this is ‘moving’ art!

These early kinetic sculptures were exhibited in the 1955 group exhibition Le Mouvement at Galerie Denise René in Paris, and were influential from the late 1950s and early ’60s on the international ZERO network in which Bury went on to participate in more exhibitions and to contribute to Heinz Mack and Otto Piene’s ZERO journal. Bury began to conceal electric motors in many of his sculptures from 1957 which cause elements to twist, tilt, or spin.

In 1959 Bury exhibited his work alongside that of other ZERO artists in Vision in Motion—Motion in Vision at Antwerp’s Hessenhuis (above) and in Bewogen Beweging (‘Moving Movement’ 1961), which traveled from Amsterdam’s Stedelijk Museum to the Moderna Museet, Stockholm, and the Louisiana Museum, Humlebk, Denmark; in tentoonstelling nul (known as Nul 62) and nul negentienhonderd vijf en zestig (Nul 65), both at Amsterdam’s Stedelijk Museum (1962 and 1965, respectively); and Documenta 3 (1964) in Kassel, Germany.

Bury moved in 1961 to Paris and in 1964 he left for the United States to teach six months at the University of Berkeley and three months College of art and design in Minneapolis. This is the period around 1964, during his involvement with ZERO and his stay in the USA that he started creating his cinetisations. Both Bury’s sculptures and cinetisations employ interventions of physical manipulation to defy the pull of gravity. In a 1969 interview, the artist explained:

“I am searching for the point which exists between the moving and the non-moving.”

The cinetisations clearly continued to help develop his ideas, as Bury continued to produce them into the 1990s. Against the history of his politically nuanced philosophies, and at times radically so, his choice for subject matter of skyscrapers and monuments like the Eiffel Tower appears to be motivated by an ideological stance; a reaction to power that is a determination not to destroy, as was to be the motivation of others the 2011 World Trade Center cataclysm, but to inexorably, slowly and gently, subvert. In an interview in 1970, Bury explained:

“My cinetised skyscraper reveals the slow-motion work of gravity. . . . The intervention in the image might seem to be a menacing desire to destroy, but we must see in it the wish to give an air of liberty to that which thinks itself immutable.”

Such ideas have doubtless not been conveyed to the hapless graphic design and photography students who over the years have been required to carry out laborious cut-and-paste collage exercises based on Pol Bury’s technique, but it is still alive and well in the digital era in the work of Jean Faucheur, Alma Haser, Jiří Kolář and David Samuel Stern.

For Jean-Pierre Sudre, the negative provided the opportunity for manual interruption. 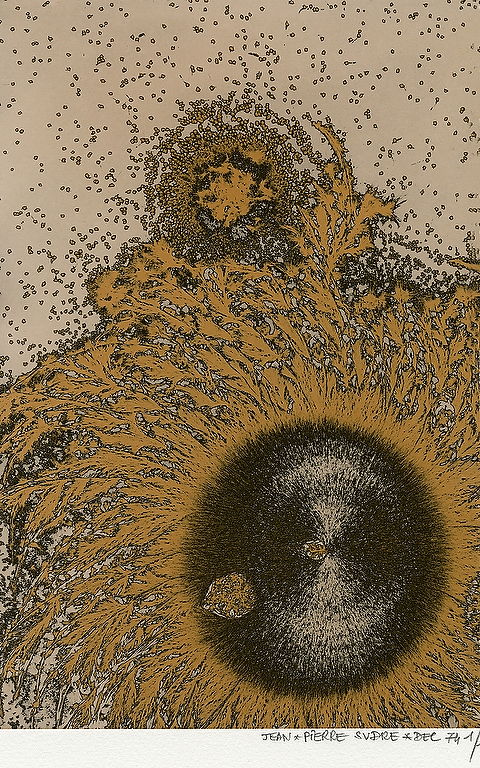 His innovations resulted in abstract imagery which evoke the metaphysical. Entranced by the hidden patterns and dense texture of nature, in the early 1950s he photographed the leaf-litter of the forest, before extending the idea into the micro scale in the 1960s. 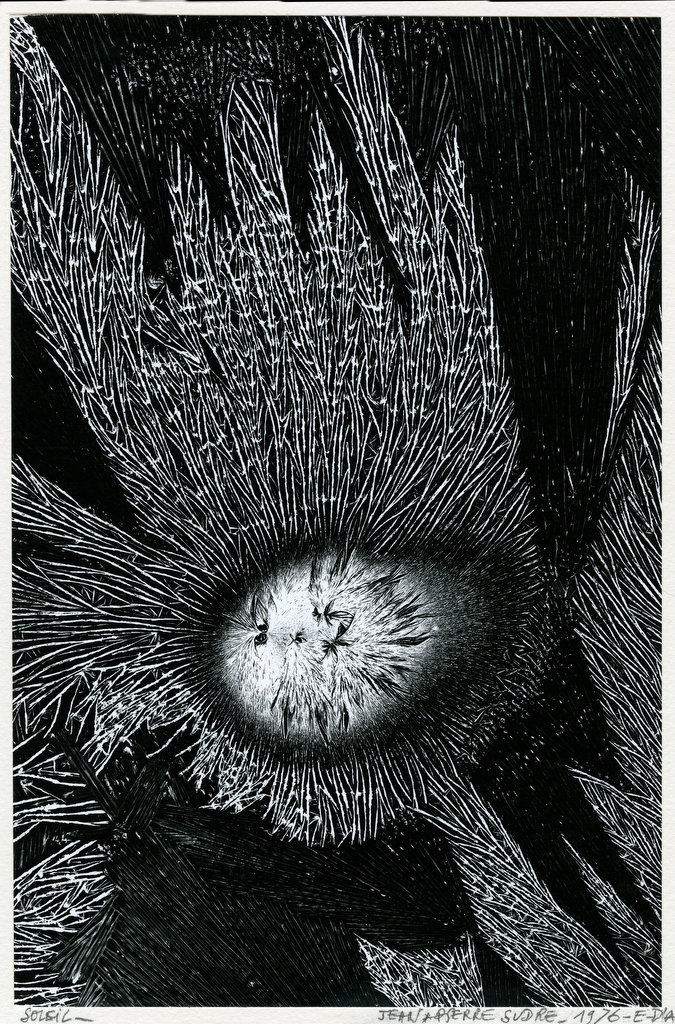 He allowed natural processes to form his images by growing crystals on glass plates. These became his negatives from which he could print his selection. The crystal microcosm presented him with a wealth of possibilities which he enlarged and translated into a cosmic scale in his many Soleil images, full of the roiling, bursting motion of the Sun’s surface gases. 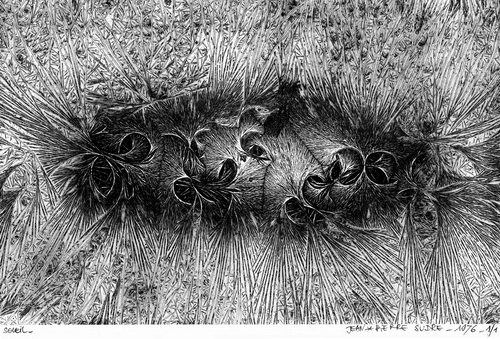 Furthering his interest in the chemical potentials of photography, Sudre invented the Mordançage technique  based on a late nineteenth century process known as etch-bleach, which he would apply to his prints.

Mordançage solution includes hydrogen peroxide, acetic acid and copper chloride. Once a fully processed gelatin silver print is put into the Mordançage solution, the shadow areas swell. Sudre would then wipe them away, where others, who followed him, rearrange the fragile veils of hanging emulsion into distorted forms. Next, he would thoroughly wash the print and redevelop it. 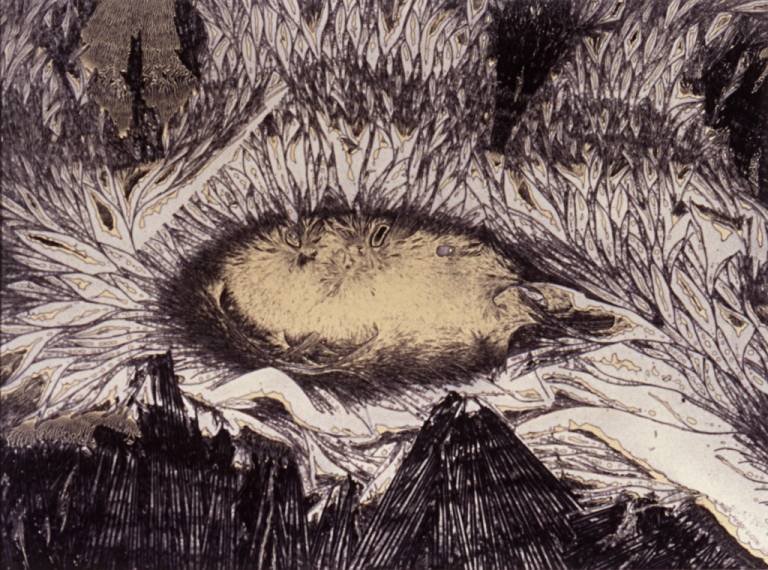 He used a variety of different developers in various solutions and often made his own photographic chemistry. He was even able to achieve a range of colours from the various toners he used and by letting the developer oxidize. 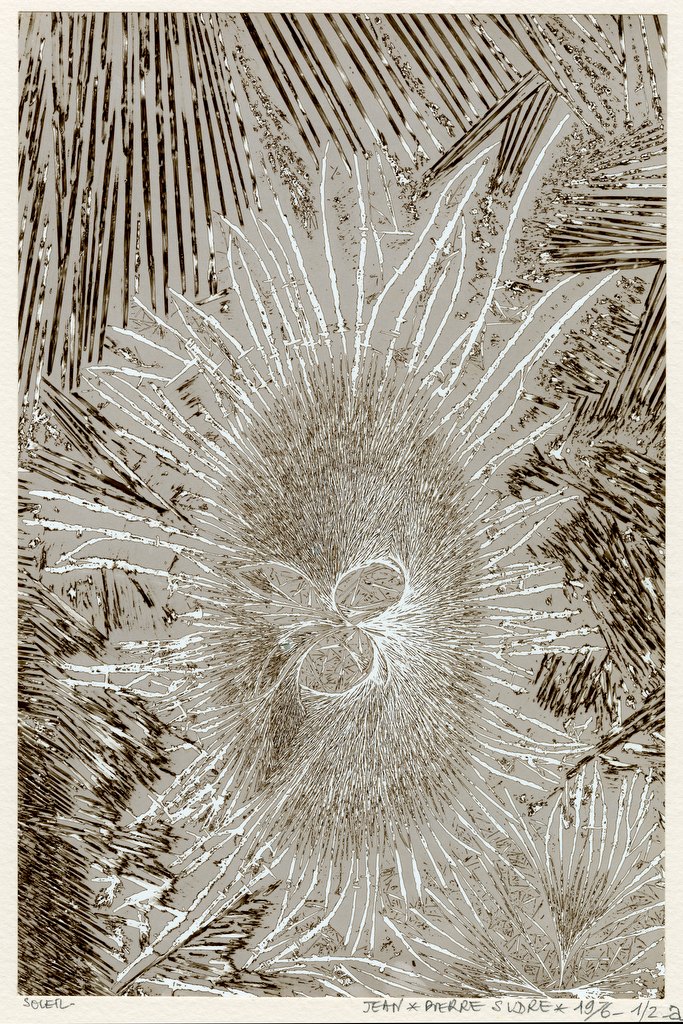 By combining cliché-verre images with photograms in the 1970s Sudre drew out a consistent array of symbols to construct an abstruse, but expressive metaphysical syntax.

In remembrance of Sudre, and as a challenge to the current generation of photographers who are disenchanted with digital imaging and who yearn for the hands-on techniques of chemical photography, art critic Vince Aletti in The New Yorker of March 14, 2016, described his “experimentation, which continued until the early nineteen-nineties (he died in 1997)” as “marvelously various, ranging in tone from psychedelic to scientific. It should be mandatory viewing for the new school of young photographers investigating the pleasures of the darkroom.”