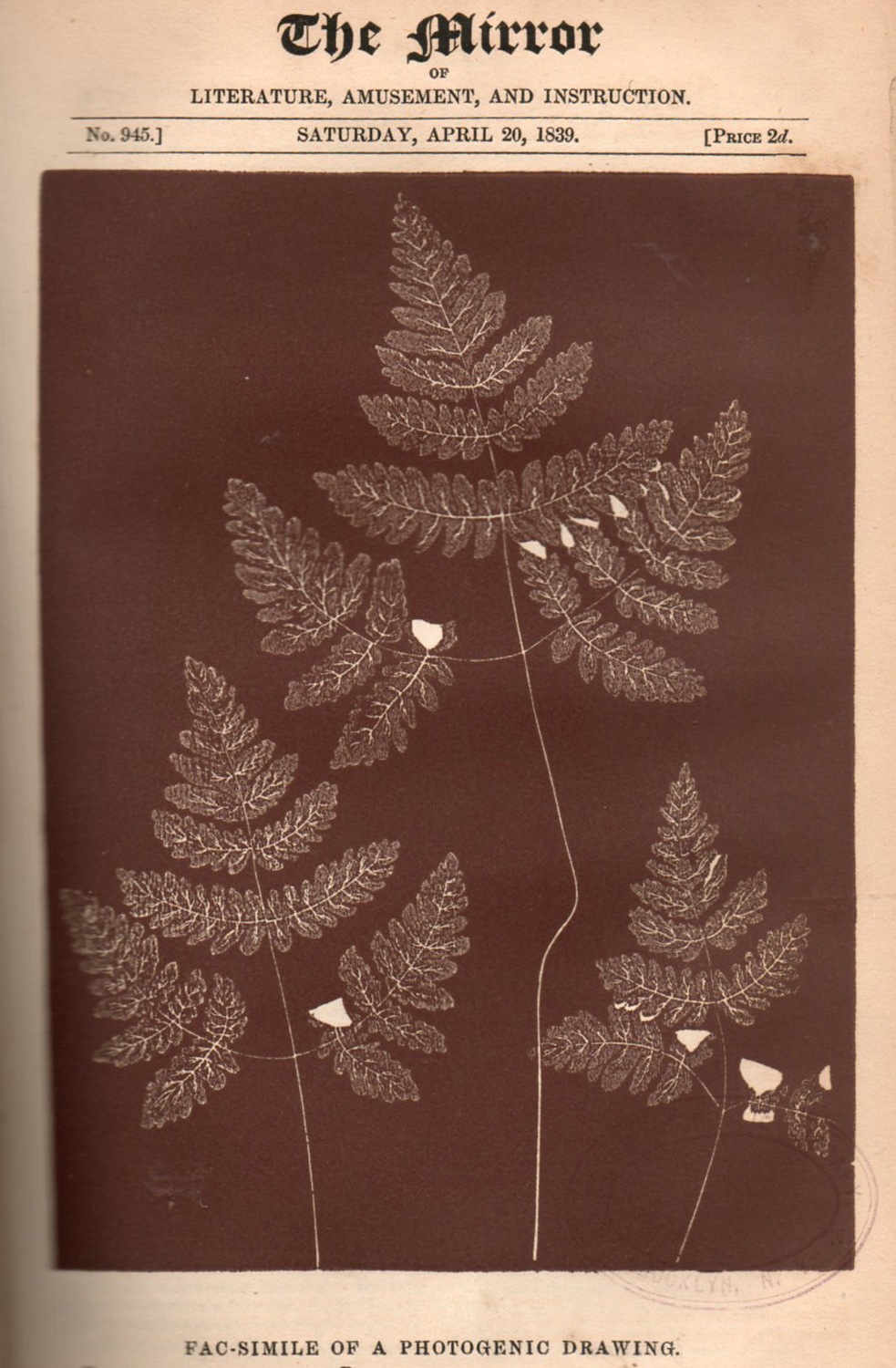 Two significant steps toward the mass printing of photographs were made on this date, one in 1839, the other twenty-seven years later to the day, in 1866.

The first published image of a photograph appeared in the educational publication The Mirror of Literature, Amusement and Instruction on this day, April 20, in 1839, in the same year as the inventions of photography were announced, the Talbotype in early January 1839 and the Daguerreotype (officially) in September. 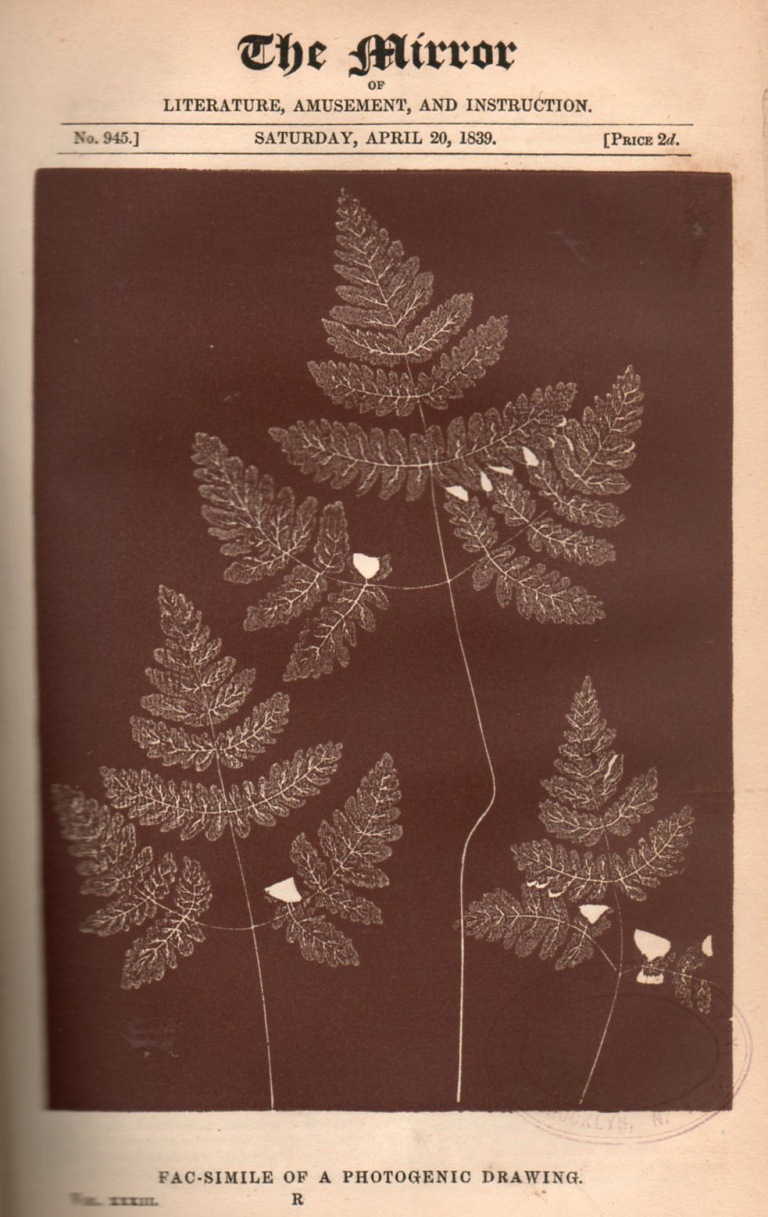 This picture A Fac-simile of a Photogenic Drawing appears on page 241 of issue no. 945, of Saturday April 20 and is the first publication of an image produced by any sort of photographic process, predating the first mass-published photograph by four years and Henry Fox Talbot‘s The Pencil of Nature by six years.

The image of the ferns is not from a lens, but is a photogram made by placing the specimen on photosensitised paper. The reproduction is a woodcut copied from that photographic object, not a photomechanical copy, but it faithfully follows the characteristics of a photogram in that it is a negative image, dark where exposed to light and paper-white in the shadows. In places the fern leaves are folded on themselves, as might have been done accidentally in a flower-press, showing that this is a dried specimen, pressed flat and therefore easily manageable in making a photogram. In addition, the ferns may have been pressed against the photosensitive paper under glass, though the illustration shows no sign of any glass edges which would have been reproduced as white lines. The leaves also overlap on the central specimen. Wherever they double up in this way the image is rendered in blank white, not in the tone carried by the rest of the leaves.

The image is very large compared to others in this publication and it is also unusual in colour; a dark rusty sepia which is as close to the colour of the original photograph (or ‘sun picture’) as the printer could achieve. Great care has been taken to copy every detail of the original and thus a large block has been selected to enable this. There was no way to enlarge or reduce woodcuts in this period except by copying by hand onto another block; they were reproduced at the size of the original.

The photogram was not made by Henry Fox Talbot. George Eastman House of Photography’s journal, Image (volume 11/2, 1962) writing about this “First Reproduction of a Photograph”,  notes:

The original was made by Golding Bird, “a distinguished botanist” by following William Henry Fox Talbot’s newly invented process, the details of which were made public at the Royal Society on February 21.

“Only a week later, on April 27, The Magazine of Science and School of Arts, another London magazine, featured three “Fac-similes of Photogenic Drawings” on its cover: two botanical specimens; (Fool’s Parsley and Grass of Parnassus), and a piece of lace. Although wood engravings created by skill of hand, they approach photography more closely. For the very wooden block used for the printing plate was itself sensitised  just as Bird’s paper had been sensitized, and the engraver followed with his burin the photographic image itself, rather than the artist’s drawing.”

“The photogenic drawings were contributed to the magazine by a reader who signed himself “G.F.” He commented, in his covering letter published in the same issue: “I send you three drawings of this new art, which were impressed at once on box-wood, and therefore are fit for the graver, without any other preparation. I flatter myself that this process may be useful to carvers and wood engravers, not only to those who cut the fine objects of artistical design, but still more to those who cut patterns and blocks for lace, muslin, calico-printing, paper-hanging, &c., as by this simple means the errors, expense, and time of the draughtsman may be wholly saved, and in a minute or two the most elaborate picture or design, or the most complicated machinery, be delineated with the utmost truth and clearness.”

However, it is interesting that in his article Bird also mentions printing images directly on to boxwood blocks for engraving. Helmut Gernsheim noticed that an advertisement for the first photographic camera ever made for sale to the public by Francis West, an optician of 83 Fleet Street, London, was published in this same issue of Mirror, such was the pace of developments in and commercialisation of photography.

In 1848, drawing on his article published serially in Mirror, Bird later published Elements of Natural Philosophy; being an experimental introduction to the study of the physical sciences which drew on his articles in Mirror.

Anna Atkins‘ book Photographs of British Algae: Cyanotype Impressions appeared in October 1843, a privately published collection of cyanotype photographs made directly from the seaweeds exposed on the paper sensitised with potassium ferricyanide, ferric ammonium citrate and (optionally) potassium dichromate. It was a process invented by Sir John Herschel in 1842 which he envisaged as a means of reproducing notes and diagrams; the first ‘photocopies’ as in architects’ and engineers’ blueprints.

Talbot’s The Pencil of Nature was produced in parts between 1844 and 1846. It took months to print the thousands of ‘sun pictures’ necessary to illustrate the article on the Talbotype that appeared in The Art Union in June 1846, and fading remained a problem.

However, more efficient photomechanical processes were not long in being developed. On another April 20, in 1866, The Photographic News was issued that contained a sample of photolithography made with a rudimentary dot screen that enabled the reproduction of continuous-tone photographs, alongside and simultaneously with type, using a just black ink on white paper, through mechanically produced ‘stippling’. The Bullock Brothers of Leamington used a system of photolithographic transfers from previously grained transfer paper which they patented in 1865. This is one of the few prints known to be by the partners. It gives a creditable rendering of shaded roundness on the tree trunks, but the subtleties of grey tones on the grassy path are marred by an artifact of the ink application; a vertical stripe.

The brothers’ patent was one of the earliest to make reference to the use of dots and lines, though Henry Fox Talbot and others had understood the principle but failed to put into production.

It wasn’t until the 1870s however that dot-screen relief printing compatible with type reached speeds and volumes necessary for commercial viability. Fine dots and lines continue to be the way continuous-tone photographs are represented on paper, in video and on computer screens.