April 14: Structuralism in both architecture and photography represents space as a social construct.

As always, today’s post is built on a temporal coincidence. In this case a portrait was taken of Mien Ruys this day in 1990 by Dutch architectural photographer Michel Boesveld which resonates with others of his portraits of architects from the 80s and 90s, and a different series made more recently in Tokyo. There is another connection to this day; nineteenth-century architectural photographer Henry Dixon was born on this date in 1820 in St. Pancras, London.

Michel Boesveld took his photograph on Easter Saturday in 1990, and the atmosphere is relaxed. As in all of Boesveld’s portraits the subject seems unaware of the presence of the camera, or is caught by the photographer as they fall into a reverie or are concentrating on their work or surroundings. This strategy is entirely appropriate; he wants us to see the person is enclosed in their own architectural space and for the viewer to be aware of both.

Here the subject of the picture is Mien Ruys (Wilhelmina Jacoba Moussault-Ruys, 1904 – 1999) a nationally celebrated Dutch landscape and garden architect whose gardening legacy is maintained in the Dutch town of Dedemsvaart, home to the Tuinen Mien Ruys (‘Mien Ruys Gardens’), where the picture was taken. Her garden design became especially important in the 1950s during the period of restoration and rebuilding after the Second World War when, leading the “New Perennial Movement” she promoted the idea of using European perennial plants suited to the local conditions organised in spare, Japanese-style gardens with a calming, meditative influence.

Mien Ruys is 86 years old in this photograph, and by then had become a national figure known through her quarterly magazine’ Onze eigen tuin (‘Our own garden’) and the opening to the public of Tuinen Mien Ruys, 6.2 acres containing a sequence of thirty gardens that she designed and which is now a national monument to her.

Boesveld presents the viewer with a rectilinear space that faces the camera straight on, with the vanishing point, made obvious by the bare boards of the room, at the centre of frame. This is as much an architectural photograph as it is a portrait.

Ruys vigorously raises herself against the propped pillows on the chaise-longue to look, with an intense and attentive gaze, out at the garden of which we are allowed only a glimpse; a shrub, a tall stave fence, trunks of a still-bare tree, interrupted by the cutout silhouette of a bird taped to the window, placed there to alert real birds to the presence of the glass.

Most of the image is occupied with the bare wall on which we may read a second portrait; a shadow of  Ruys’ head is subtly projected there by the reflection from the white-painted floorboards. The whole image is activated by the slash of sunlight that crosses wall, floor and Ruys’ legs, but Boesveld makes no attempt to compensate exposure, nor to add fill-light, or to manipulate his print with burning-in, to get more detail into highlights of the sunlit garden. He reserves his mid-tone range for his human subject, her noble aged face and the Japanese silk of her chemise. This, like Boesveld’s other portraits, is full of respect for the person and their space.

Henry Dixon was a British photographer who worked in London during 1870s and 1880s and was best known for a series of photographs of buildings that were threatened with demolition. These were commissioned by the The Society for Photographing Relics of Old London, formed when the Oxford Arms was about to be pulled down as part of the new Old Bailey development in 1875. The urgency to record it was a desire to preserve something of its structure; it was a surviving example of the galleried inn, a building with balconies from which spectators could watch theatrical performances in the enclosed courtyard below. Chaucer’s Tabard of his Canterbury Tales is a legendary forebear. No other trace of the Oxford Arms remains, but Dixon provides us with rich detail in his photographic rendition; for instance the stout, blurred onlooker at the entrance to the lane, and the curious chalk graffiti on the boards that protect a creaking timber three-storey extension from traffic in the courtyard which has already battered the bollard on the corner. The very last galleried pub is the George Inn, Southwark.

In every one of Dixon’s photographs of Southwark a thick smokey atmosphere obscures detail of even of buildings across the street in some instances, despite the sharpness of foregrounds that he obtains through small apertures and very long exposures. Until the mid-twentieth century, the district was filled with wharves and warehouses, a place that had been home to trades associated with ship building and noxious industries such as glass-making, leather tanning, and hat manufacturing that were banned from the City of London. But the borough also housed religious institutions such as the Bishop of Winchester’s palace and the church of St. Mary Overy (now Southwark Cathedral).

The Society, campaigning to record other disappearing sights, hurriedly commissioned  Dixon, and brothers Alfred and John Bool, to produce photographic records of further buildings under threat. These were issued with descriptive text by the painter Alfred Marks.  Henry Dixon, who began his working life as an apprentice to his elder brother, Thomas, a copperplate printer took up photography as a profession before 1860, and operated his own studio until 1886, when his son Thomas James joined him. 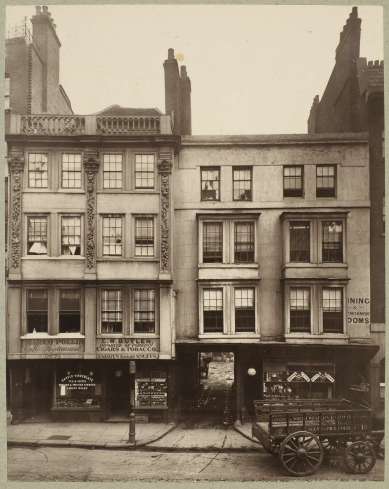 Dixon is also known for his animal photographs taken at the London Zoo which was close to his home, but it is his architectural images that mark him as a professional; notwithstanding the teetering condition of the ancient buildings he photographed, the verticals are all true and the framing demonstrates his comprehension of the qualities of his subjects’ structure.

While Dixon photographed buildings with an interest in preservation, Michel Boesveld provides a valuable insight into the relation of the builders, the architects, to the structures he photographed one hundred years later.

In Boesveld’s portrait of Aldo van Eijck, we are placed in the dressing room of the bedroom in one of this architect’s designs, Hubertus House, which provided low-cost housing for multiple families. Again the observer is unnoticed by the subject, who appears to be absorbed in contemplating the checked patterns of cushions on a bed. Lacquered timbers in the alcove reflect the light and share shapes with the wall hanging above the bed.

A leader of the Structuralist movement in architecture which held that the elements of culture must be incorporated into structures, he was the author of The  Aesthetics of Number, promoting a concept that applies the organisation of cellular tissue to large built forms such as his design for the village of Nagele, Noordoostpolder, 1948–1954, Housing for the Elderly, Slotermeer, Amsterdam, 1951–1952, Amsterdam Orphanage, Amsterdam, 1955–1960 and the Primary Schools of Nagele, Noordoostpolder, 1954–1956.

Michel Boesveld, after a career over the years 1986-1999 as a freelance architecture photographer, is now in semi-retirement in Massa Martana, Umbria, in Italy where he is photographing the vernacular architecture.

He visited Japan in 2006 to take architectural photographs and exhibited in EIZO Galleria in Ginza, Japan in 2010. During his visits he photographed the homeless there, whose numbers increased during the GFC.  Their demographic profile is dominated by older men and younger unmarried men, those most likely to be laid off during an economic downturn, and it is clear from Boesveld’s clandestine images of them that many are not completely destitute, but with their suits and brief cases, are desperate to maintain at least an appearance of being part of the corporate world from which they have fallen. 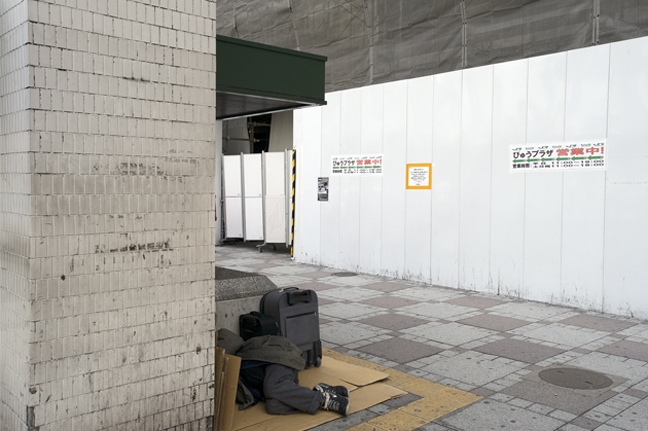 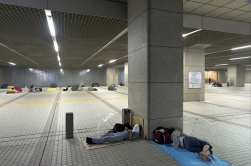 As with his portraits, Boesveld keeps his distance, making us aware of the built environment in which these desperately tired figures have found some temporary refuge, whether well sheltered or merely a bare patch on which to lie.

This is consistent with Boesveld’s much earlier portraits of architects for which he adopted the unusual device of showing them also reclining, absorbed in the structures they have designed.

That he finds a commonality between the homeless and successful professionals at the peak of significant careers represents a perceptive irony that comes with astute observation, age and experience.