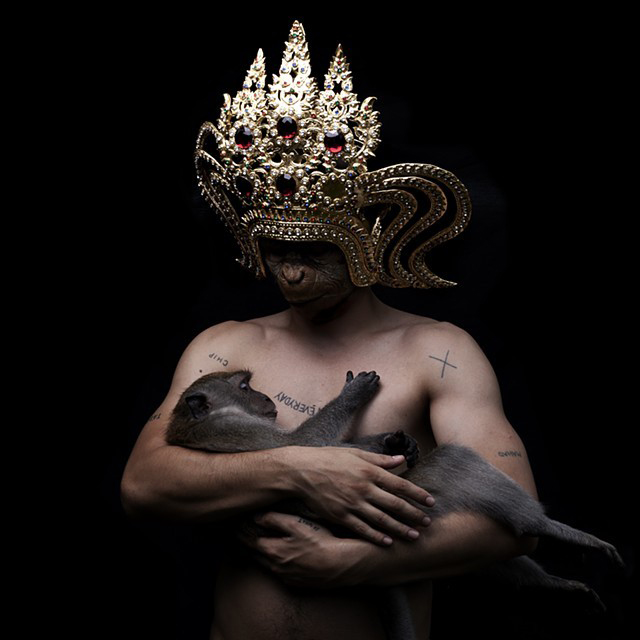 April 3: Perth Centre for Photography would seem to be presenting us with an oxymoron in its title for its show Fragile Armour, but in fact art and armour have long been associated, and little is more fragile (and lasting, once in the mind) than an image. In camouflage it is the image that forms a defence.

Thayer’s Law’ states that ‘animals display darker colouring along their topline and paler colouring on their undersides as a means of camouflage because it counters the shadow cast by the sun.’ The Law is so named for American painter Abbott Handerson Thayer (1849-1921) who in his 1909 book, Protective Coloration in the Animal Kingdom, made the observation that ‘countershading’  could have the effect of cancelling shadows and flattening a creature’s appearance.

He was a well known artist in his time he is now largely forgotten though countershading, his most lasting contribution to the understanding of animal colouration, has meant that he is still recognised amongst zoological researchers than by art historians. He and his son Gerald (1883–1939) demonstrated the effect with paintings and photographs, including this one;

This photograph of a countershading demonstration was published in an article by Gerald Thayer in 1908. Yes, it’s all but impossible to see the countershaded duck though there are faint traces of its wire stand; Thayer’s photographic demonstrations themselves give rise to a further oxymoron, the ‘photograph of an invisible object’! However his picture of a carefully lit countershaded human subject on a specially prepared lighting stage is more convincing because we can still make out the ‘invisible man’

In the last twenty years of his life, Thayer combined his studies of art and natural science for camouflage development and at the outset of World War I, was eager to contribute his findings to the military, and submitted US patent US715013A for a Process of treating the outsides of ships, &c., for making them less visible, an application of his countershading experiments. Convinced of its value to the protection of human life he developed camouflage using principles evolved in animals to protect them, including the idea of visual disturbance and a disruption in the continuity and clarity of the single animal‘s contours, as he saw in the zebra for example.

For Thayer, who was bipolar, to convince the military to employ such patterning, which became known as ‘dazzle’, to conceal large objects became an obsession. A proposal for the use of countershading in ship camouflage was eventually approved for use on American ships, and hundreds of artists joined the American Camouflage Corps. However it was the British marine artist Norman Wilkinson (1878–1971) and zoologist Sir John Graham Kerr (1869–1957) who were more effective in having dazzle designs accepted for the disguise of British merchant ships being targeted by U-Boats in WW1 and in seeing artists employed in camouflage workshops, though it was only Kerr who acknowledged Thayer’s contribution.

Interestingly it was civilian artists and scientists that pushed for the adoption of more effective camouflage by the hidebound military who seemed reluctant to find ways of protecting those serving them.

In Australia during World War II, experiments with infantry camouflage revived research by the Thayers, as shown by Ann Elias in her 2011 book  Camouflage Australia: Art, Nature, Science and War.

The Sydney Camouflage Group, which formed in 1939, with The British-born marine zoologist William Dakin heading their efforts after complaining to the Prime Minister, John Curtin, of the Army’s bad practice with camouflage in New Guinea for which he blamed the deaths of many Australian soldiers because of the visibility of their uniforms.

Dakin and his colleagues, who included prominent Australian photographer Max Dupain whose work creatively exploited shadows in the modernist manner. Together they made demonstrations of countershading, and like Thayer, but without credit to him, Dakin and Dupain photographed fabricated bird models and silhouette cutouts of soldiers through which they could isolate the bushland setting through them, to arrive at the best camouflage patterns.

Dakin was a researcher at the University of Sydney, so the university grounds were used to test their concealment and deception methods, while Dakin’s office in the Zoology Department was a camouflage laboratory, and by July 1941, the majority of the Sydney Camouflage Group’s members had become accepted as official camoufleurs with the Department of Home Security. 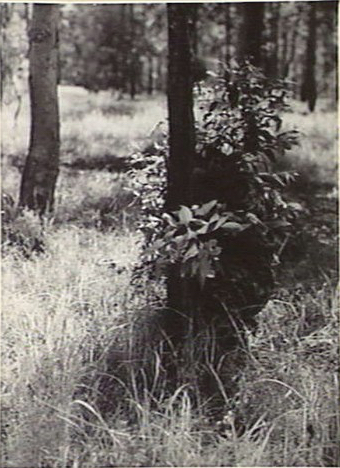 Max Dupain (Nov 6, 1944) Wongabel, Qld; a student crouched behind a tree during a course at headquarters on concealment and deception. Picture: AWM 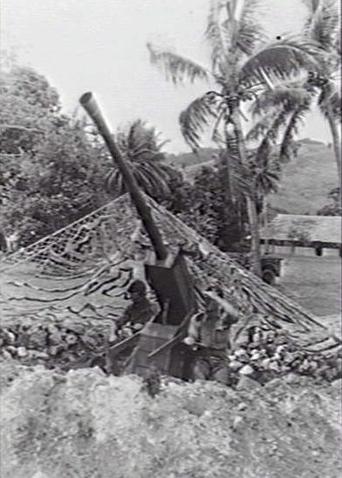 Max Dupain (September 1942) Goodenough Island, New Guinea; a camouflaged wooden gun, part of a deception by which the small group of australians who seized the island by convincing Japanese enemy of a larger Australian presence. Picture: AWM.

Interestingly, Thayer‘s (no doubt photo-derived) paintings of his own children as angels might not be out of place in the Perth Centre for Photography exhibition, in that they embody the idea of ‘fragile armour’, and would sit in relation to Petrina Hicks’s similarly pale and perfect imagery. 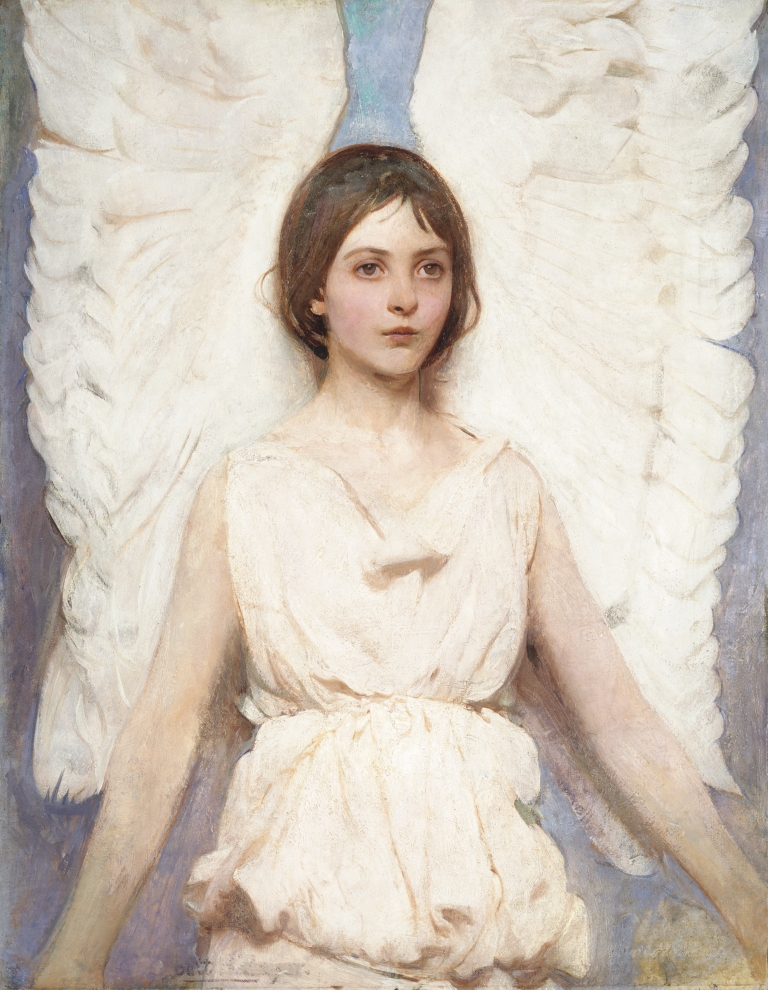 Like Thayer, who arrived at the idea of depicting his daughters as angels from his interest in plumage, Hicks’ reference is also elliptical, but hers is more macabre in intersecting a child’s play with bird skulls and the unsettling effect of countershaded lighting.

Fragile Armour, is neither a dainty nor insubstantial exhibition.

Abdul Abdullah (*1968, Perth), son of a sixth-generation Australian and a Malaysian Muslim and currently based in Sydney, works across painting, photography and video incorporates performance in his photographs and his series showing a cryptically tattooed man in a monkey mask cradling a chimpanzee, which is a self-portrait, is typical of his confrontation with the contradictory question often thrown at him in interviews; “Are you an Australian, or are you a Moslem?” which presents ‘Australian Moslem’ as a further oxymoron. His mask here continues his presentation of the Australian Moslem citizen as something other, not entirely human, not fully evolved and integrated into Aussie society. It also armours him, but at the same time is a sign of tender empathy with the creature he holds in a relation that is also self-deceptive, and which by turn reflects on the viewer to challenge them to reorient their own perceptions.

For Tony Albert (*1981, Townsville), as for Abdul Abdullah, camouflage is out of the question, his origins being also visible on his skin. For 10 years he has used text, video, drawing, painting and three-dimensional objects to examine the legacy of racial stereotyping and the cultural misrepresentation of Aboriginal culture. His series Brothers and subsequent iterations of it align with the Black Lives Matter movement and is a reaction to his attendance at a 2012 rally protesting the the shooting and wounding of two Aboriginal teenagers, aged 14 and 17, by police in Sydney’s Kings Cross.

Albert was impressed by a group of boys who’d taken off their shirts to reveal targets drawn on their bodies. Their gesture recalled the picture of footballer Nicky Winmar who during a game in 1993, in response to racial vilification by the opposing team, raised his guernsey to point in defiance at his skin. Wayne Ludbey‘s photograph published in the Sunday Age under the headline Winmar: I’m black and proud of it became an anti-racist icon. In Brothers the meaning of the target is transformed by the body-language of the subjects who, presented frontally against a blank background in the manner of police mug shots, express ever greater defiance. The target as shield, becomes an emblem of pride.
I wanted this look that they were coming out of the photograph in this act of defiance or strength, that they were going to wear this target but they were going to own it. We are constantly wearing a target as people but I guess there’s also an optimistic twist about how, and why, and where, and when we wear it or change it.

Using another application of the target symbol Albert won the prestigious $100,000 Basil Sellers Art Prize in 2014.

David Collins (*1988, Perth) also currently lives in Sydney, New South Wales, an MFA graduate from Sydney College of the Arts in 2017. He worked with Tony Albert in an 18-months-long residency In Cahoots: artists collaborate across Country in remote and regional Aboriginal art centres across Australia to produce collaborative artworks. They included paintings, printed mini blankets, a vast installation of sculptural and relief works made from discarded tin and detritus.
Collins, with the Warakurna Artists, produced this striking series of large-scale digital photographs in which children of the community appear in super-hero costumes atop the rusty wrecks of discarded cars; wearing an armour in our own Western pop culture image, fiercely confrontational amidst the battleground of underprivilege and neglect to which Australia’s indigenous population is condemned.

As she is a multimedia artist, Angela Tiatia, born 1973 in Auckland, daughter of a Samoan mother, is outside my area of expertise and the ambit of this blog. However she has, in Dark Light (2017), subverted and challenged the context Max Dupain’s famous Sunbaker.

It was an iconoclastic response for the Monash Gallery of Art show Under the sun: Reimagining Max Dupain’s Sunbaker with an installation combining video and photograph of the same artist performance. She replaces the sun with a chandelier in reference to European colonisation and situates her self-portrait in dense tropical foliage, playing out the concealment — and exploitation — of the indigenous body. Both also derive from her twenty years experience in the fashion industry as a model. She says of the response of her Samoan audience that they were alarmed and angry because she broke the taboo within the culture in revealing her malu, a sacred tattoo on her thighs.

She might be speaking for the other exhibitors in saying in interview with i-D fashion magazine;

I go by gut instinct and make works that are immediate and urgent for me; I know if I’m true to myself and the work there will be an audience that understands. But there will also, inevitably, be a new audience that will come across my work whom I agitate.

There is no contradiction there, though she is speakng of a necessary confrontation in which she and the others are protected only by the fragile armour and camouflage of the image.

One thought on “April 4: Camouflage”