March 21: Photography is known as the art of light. It is a paradox then that as we watch a print develop, it is the blacks and greys that we see, while light is represented as negative white space. We are photographing blackness.

Paulo Nozolino was born on this date in 1955 in Portugal, Lisbon, a photographer who has traveled widely producing major work on the Arab world (1989-95) and since then in numbers of locations mainly in Europe. While Jindrich Styrsky (*1899), Czech painter, printmaker and photographer, also on this date, died in 1942. 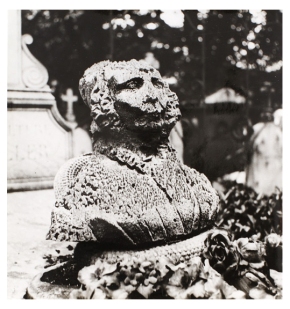 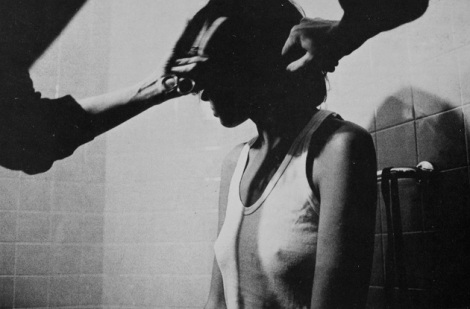 In their separate and distinctive ways both photographers represent the dark, one the nocturne, the other, the world of sleep.

Nozolino conducts workshops, most recently at Rencontre d’Arles. We photography lecturers, teachers, instructors —and students— would do well to take note of how the description of his six-day course provides an insight into his aesthetics, and ignores techno-jargon;

This workshop is not for digital photoshop liars, reportage, landscape or portrait photographers, conceptual artists or career seekers. It is a workshop for the unsure, the poets, the dreamers, all of those who feel they don’t fit in the system!

…we will discuss content rather than form and how to make a coherent statement through sequencing for an exhibition, a portfolio or a book. Using photography as a scalpel, perform visual surgery on a make-believe world, getting to some kind of personal visual truth. Work is about making things as simple as possible, using one camera, one lens, one eye and time to waste; walking, thinking, talking. Photographs […] get to the core of things, people and places, by contemplation and acute action, by reduction not accumulation.

His principle of ‘reduction’ of taking away, is apparent in the way he uses blackness and darkness, augmented by print manipulation in the darkroom. To discuss how that is done, let us briefly consider technique. For the print below, for example, the shot has been taken into the sun which clips the edges of the forms of the woman and the goats, while a mirror, just right of camera, reflects sunlight across the eyes of the subject. In printing the whole print has been heavily exposed while the eyes are dodged back.

I take very simple photos and, for nearly twenty years, I’ve only taken vertical photos. Is that a reaction to cinema, which I no longer watch? My field of vision has become increasingly narrow, for, what interests me, is a refusal of the grandiose. My work is an apology of the daily, of the banal, of the poor.

My photography is about a sentiment of loss. It’s a quest for the pure. I take great pleasure in simplicity, from working in an acute economy of means.

Loss and melancholy could be expected to be found in Sarajevo, Bosnia-Herzegovina, in 1997, two years after the Siege of Sarajevo (1992-1996), the longest siege of a capital city in the history of modern warfare, during the Bosnian War for independence, in which thousands of Sarajevans lost their lives under constant bombardment and sniper shooting at civilians by the Serb forces.

That year in September, Irish rock band U2 performed in Sarajevo to a train-load of fans from the divided city of Mostar and busloads from Banja Luka, the capital of the Serb Republic — Muslims and Croats who had been bitterly fighting each other for four years. 1997 also was the year that the film Welcome to Sarajevo was released, which also ends with a concert.

Nozolino’s symmetrical and balanced ‘day-for-night’ image, again shot contre-jour, shows two boys running toward the camera. Detail of the children’s matching striped tops (are they competing in a race?), and the cryptic graffiti ‘Hasib’, is subsumed by darkness, subjugated to a feeling of freedom and hope. That sense is supported by the accelerating perspective of the pavement, the movement of the figures and their relation to the gap between the buildings that reveals distant hills and clouds.

I went to Sarajevo three years after the war. I like to see how the wounds heal, how people deal with the scars. I’m definitely not a photojournalist.

Quite the opposite feeling pervades his image of Beirut in which the hollow skull of a bombed apartment building faces a bleak, empty sky. Pronounced grain, notable in much of Nozolino’s work, augments the dusty haze.

And “for the unsure, the poets, the dreamers, all of those who feel they don’t fit in the system”, Nozolino is your man. After studying at the London College of Printing from 1975 to 1978, and inspired by Robert Frank, Paulo Nozolino started his peripatetic and impromptu travel to Europe, America and Asia, recording his travels in the manner of an urban travel diary, through Berlin, Trieste, Venice, Lisbon, Vienna, Budapest, Madrid, Paris as well as to Sarajevo and Beirut.

However, in most cases it is unnecessary, and without titles, probably impossible to know where each image was taken. They are not a travelogue and to ‘represent’ or encapsulate the character of a particular city is not his aim. In paring-down his imagery, as above, he is seeking to make a symbol of his subject, surrounded by an aura, like a religious icon;

I think it’s necessary, especially today, to maintain a quasi-mystical and quasi-religious character in photography: taking photos is a highly solitary practice. It’s almost of the order of a mission, at least for some of us. It’s above all not decorative, it’s not wallpaper. I want my photos to be like icons. That’s what I aspire to, that they be perceived as something you can find in a church. Something which is so simple, so pure, so noble… That’s what photography is: choosing what you want in this vast world and giving it importance, according to our code of values. 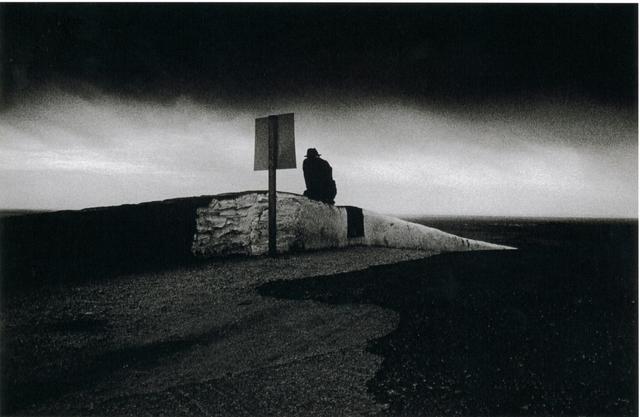 At the same time there is a fascination with human experience, with loneliness and passion as is indicated by the titles of his photobooks, his first Para Sempre (‘Forever’) self-published in 1981 Far cry (2005) and Bone lonely (2011), along with Penumbra (1996), Makulatur (‘Worthless’ of 2011) and Nocturno europeu (2014). Hi latest, Loaded Shine is to be released this year in May.

“…we will discuss content rather than form and how to make a coherent statement through sequencing for an exhibition, a portfolio or a book,” is how he frames his workshop for potential students and it is in his own books and in diptychs and triptychs on the gallery wall that we see him apply “photography as a scalpel”.

I started my book on the Arab world, Penumbra, while I was living in France. Jean-Marie Le Pen was talking about the “dirty Arabs” all the time. It bothered me, so politically I was already motivated, even though I didn’t want to produce political work, because it grows old very fast and in a way it’s demagogical. Christian Boltanski is political without being too political. So is Gordon Matta-Clark, it’s the same struggle. I was photographing Poland when I went to Auschwitz. That day remains etched in my memory forever! From then on I would never be the same. 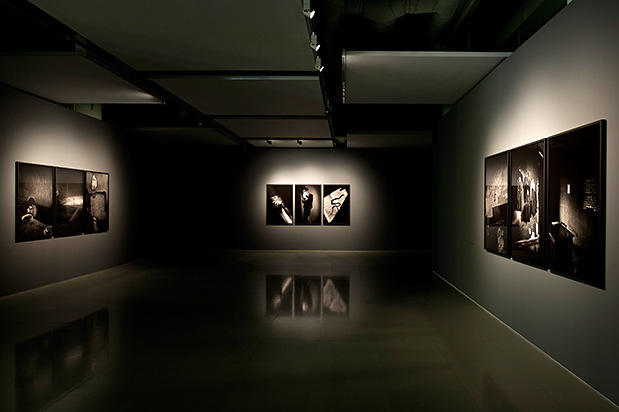 For a 2011 exhibition in a Lisbon bank foyer (above) he showed a series of nine triptychs a setting in which the title he chose, With Usura, from Ezra Pound’s Canto XLV, is deliberately provocative and political, though concealed in a double meaning, as in Portuguese the word means ‘worn’ or ‘weary’. In Pound’s short definition at the end of the poem ‘usury’ is the charge for the use of purchasing power, levied without regard for production, and often without regard for the possibilities of production.

The early death of his sister in 1905, when he was six, has repercussions in the later work of Jindrich Štyrský. He was born in Dolni Cermná, a small town in Bohemia and studied at the Prague Academy of Fine Arts where in 1922, he met Mary Cermínovou (1902-1980) (aka Toyen) and the next year joined Devetsil, an association of Czech avant-garde artists founded in Prague three years earlier, and participated in their group exhibitions.

Štyrský and Toyen lived lived and worked together in Paris in 1925 for three years. They showed their work in the 1925 Paris exhibition L’Art Aujourd’hui. Inspired by the Parisian Surrealists, Štyrský began recording his dreams, which he was to revisit in the 1930s;

Sleep is a bee that gathers honey for reminiscence to savour…We have no reminiscences, but we try to construct them.

Štyrský, with his camera, sought surreal subjects on the streets and in the flea markets, sideshows, and window displays of Paris, finding graphic fortune-teller’s signs, a music box; caskets; cupids; artificial limbs; and other treasures which he cropped tightly, often contact printing through a paper mask to remove contextual reference and to release the poetry of the tiny images arranging them in series: Frog Man, Man with Blinkers, and Paris Afternoon.

In 1928, back in Prague, Štyrský became director of Devetsil’s ‘Liberated Theatre’, collaborating with writer Vítězslav Nezval, also a photographer. In 1934, Styrsky, Toyen, Karel Teige, and Jindrich Heisler founded the Czech Surrealist Group in Prague, which was allied to André Breton‘s group in Paris which in 1935, invited Styrsky went back to Paris. There, he fell seriously ill, probably suffering from the same bad heart condition as his sister. From this stay Styrsky would only temporarily recover.

Štyrský kept this body of dream images, the drawings and prints, private until nearly the end of his life, when he published a personal edition of Dreams in 1941; a selection of 33 dream accounts and encounters, independent of text. Dreams was republished by František Šmejkal in 1970.

Exemplary of the dream-literature from the Surrealist tradition, its Freudian subjects are death, explicit sexuality and the fragmentation of the body, mixed with symbols personal to the artist that include places, like Prague and Paris, and his close companions, Nezval and Toyen.

Štyrský’s sets of photographs were openly exhibited and reproduced in his lifetime, and their purpose, like his drawings and prints in which they often feature through montage, was  ‘[to search] for surreality hidden in everyday objects’ to emphasise the  latent symbolism of objects when their actual function is hidden.

Štyrský recognised the ‘irrationality of photography’ and Štyrský and Heisler’s 1934 book Na jehlách těchto dní (‘On the Needles of Days’) uses the poems of one and the pictures of the other in a complimentary, rather then explanatory manner. The Czech book is thus the forerunner of Paul Éluard and Man Ray’s publication Facile (1935) and Georges Hugnet’s album La Septième face du dé (1936), but it was an underground activity, clandestinely published in 1941.

All through the dark days of the war, for four years amongst the arrests and deportations of Jews in Nazi-occupied Czechoslovakia, Štyrský and Toyen, sheltered Heisler, who was Jewish, in their bathroom.