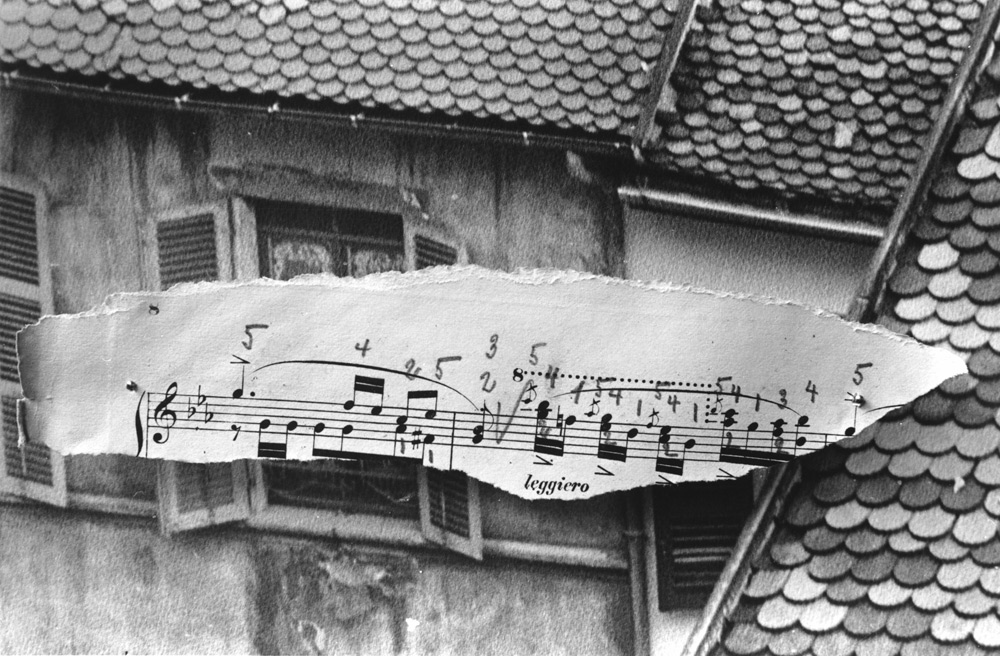 March 16: To name a daughter after her, a revered photographer must be very special. Our eldest daughter’s name is Mari.

I was at a funeral today and amongst the usual palaver of a Christian service, meaningless to me, a quite occult action was performed. The family was asked to come forward and place on the altar a memento of the unexpectedly departed. We in the congregation could not see what those things were and nor were we told, but they provoked us to ask ourselves, and in our imaginations to ask our memory of the dead man, what we might place there that might mean something to both of us.

Mari Mahr, born on this date in 1941, presents us with such objects, usually inconsequential in themselves and often of no monetary value, but which trigger memory for her; cheap ornaments, votive figures, dolls, her father’s drafting instruments, part of a page torn from a music score. What are they to mean for us?

In her hands these objects are like archaeological discoveries that fill in a history or confirm a theory about lost cultures and disappeared peoples. They provoke curiosity, like the things found in the cabinets and solander boxes of the antiquarian. Like a novelist Mahr is able to conjure from these little things a scenography, a conversation, a denouement.

Though one might easily recognise her work, that is not to say she is formulaic. She has a distinctive trick, but it is used in different and newly surprising ways each time, though she has been exhibiting since 1977.

To compare her with an archaeologist is to suggest that the objects she presents appear to have been excavated. The background to these objects, what they lie on, are photographs; her own. The excavation is enacted in front of us as the object is made to emerge from the underlying stratum of the photograph.

In her 1988 series of three prints Scholarly Virtues – Actual Conversations the final image (above) is of a pair of century-old iron double-folding chinese reading glasses. They appear to collapse against bales stamped with Chinese characters and Roman numerals. The lens cloth they rest on turns out on inspection to be also inside the print, the sacking of an opened bale.

Mahr confounds us; we don’t know what is in the now of the photo made of an object and the then of the underlying image. Consequences of this device are not only temporal; there are discrepancies of scale. The bamboo brushes that float on a bamboo raft appear to made of logs, not twigs, and yet in the foreground rest much small brushes on a row of stones on the shoreline, defying the logic of perspective.

To convincingly rephotograph a print and an object on it at the same time while  preserving the tonal range of both is a challenge. Copying invariably increases contrast and in this case that can be managed only by carefully adjusting the print, reducing the image gamma, but preserving the whites and shadow details.

In most of Mahr’s works, the objects are like gifts to both the viewer and to the person or place in which they appear; an impression borne out in the 1985 series Presents for Susana, of which she says;

One day my friend Ana decided to return home to Brazil, taking her daughter Susana. I hurriedly took some photographs of Susana so that I could continue to give her little presents I knew she liked. This would at least symbolically keep our friendship alive. Susana, however, grew older and the idea of giving her presents she had liked at the age of five had to be abandoned.

Her statement reminds us of the way time stands still in the photograph while continuing everywhere else, but that through her own magic, the objects’ ageing is stilled as well, since they too have become photographs, though appearing as objects on photographs.

On her website in her note about her early 1983 series 13 Clues To A Fictitious Crime Circa 1941 she explains that the objects she used for it came from her family, that she had brought them with her to London from Hungary. The series is her third, quite different from the more scenographic 1981 colour ‘table-top’ tableaux on Georgia O’Keefe‘s life (1887–1986), in which the use of photographs as backgrounds is more obvious, and more personal than her 1982 black-and-white sequence on Lilya Brik (1891–1978) – wife of Osip Brik (1888–1945) and lover of Vladimir Mayakovsky (1893–1930) the Russian revolutionary poet. In both cases Mahr was inspired by the Hungarian origin of the two significant women, before she turned to her own life for subject matter.

For Sydney readers, it is worth visiting the complete edition of 13 Clues to see the exquisite quality of the small prints (23.0 x 15.0 cm) which are frequently on display in the photography gallery of the Art Gallery of New South Wales, each signed and dated in pencil “Mari Mahr 84” (though the date of photography is 1983).

Such personal objects, she says, were to be the “new vocabulary for my work”. The series begins with flight, represented by the wing of a bird over city buildings, to England in 1972 from Hungary where she had trained and worked as a press photographer in Budapest.

Here “no real crime has been committed,” she says, but leaves us to interpret the clues. Against an image of her mother’s eye (“youthful in a way I only knew her from early photographs”) is pressed a Hungarian edition of Anton Chekhov‘s The Examining Magistrate, which begins;

“There is a great deal that is enigmatic and obscure in nature; and even in everyday life, doctor, one must often come upon phenomena which are absolutely incapable of explanation. I know, for instance, of several strange, mysterious deaths, the cause of which only spiritualists and mystics will undertake to explain; a clear-headed man can only lift up his hands in perplexity. For example, I know of a highly cultured lady who foretold her own death and died without any apparent reason on the very day she had predicted. She said that she would die on a certain day, and she did die.”

The penultimate image in the series provides a clue to the nature of Mahr’s use of objects. Against a photograph of hands on a piano keyboard rests another book, and on it a watch that previously has appeared blown up to the scale of a railway station clock as it perches on a chair in an old room with a Hungarian-style power point on the skirting board and cord that seems to connect to the clock.

We can make out the book title A House of Gentlefolk, («Дворянское гнездо»; literally ‘Noble Nest’) by Ivan Turgenev published in the January 1859 issue of Современник (‘Sovremennik’) a Russian literary, social and political quarterly (and later, monthly) magazine, published in Saint Petersburg 1836-1866. The passage from the facing page to that shown in Mahr’s photograph evokes the meditation one can draw from her imagery;

On Sundays, after mass, he was allowed to play, that is to say, he was given a thick book, a mysterious book, the work of a certain Maximovitch-Ambodik, entitled “Symbols and Emblems.” This book was a medley of about a thousand mostly very enigmatical pictures, and as many enigmatical interpretations of them in five languages. Cupid–naked and very puffy in the body–played a leading part in these illustrations. In one of them, under the heading, “Saffron and the Rainbow,” the interpretation appended was: “Of this, the influence is vast;” opposite another, entitled “A heron, flying with a violet in his beak,” stood the inscription: “To thee they are all known.” “Cupid and the bear licking his fur” was inscribed, “Little by little.” Fedya used to ponder over these pictures; he knew them all to the minutest details; some of them, always the same ones, used to set him dreaming, and afforded him food for meditation; he knew no other amusements.

On the open page under the timepiece begins the harsh transformation of Fedya into ‘a man’ by his father, breaking his connection with these ‘symbols’ and ’emblems’, but in which process the father is sickened and weakened, dead by the end of the chapter. In directing us to these Clues, Mahr signifies the power of objects over the tyranny of time, memory and death.

There is an evident love of buildings and architecture running in a thread throughout her work that can be traced back to her father whose stature in her eyes loomed large. Above she cleverly caps a photograph of the music studios at Crear House, Scotland, (where she conducted a workshop) with German poet Heinrich Heiner’s 1827 Book of Songs placed on its edge so that in a view from above it appears to project from the photograph, sheltering the building.

Under Stalinist repression he left the country and worked for Pierre Forestier (1902–1989) in Paris in 1938-39 before again fleeing with his young wife to Santiago, Chile, to escape the threat of Nazism. There, daughter Mari was born, while he completed several family houses and apartments, and a large market hall in Concepción based on aircraft hangar construction.

When the Chilean political environment made architectural practice untenable the Weiners returned to Hungary in 1948 where he worked in the Ministry of Construction and from January 1950 until his death, he directed the design and construction of Dunaújváros, formerly Sztalínváros (‘Stalinville’) the so-called “first socialist city”.

However, the situation for him under the Soviet regime, which had at first embraced modernism and then officially proscribed it, can not have been happy, he being forced to implement the ‘Socialist Realist’, state-approved style that favoured symmetry, monumentalism and hybridised, modernised and debased neoclassicism.

Of her series Daughter of an Architect (2004) she shows us his desk (above) on which cartridges of paper staples stand in for stacks of files and modernist designs. She says;

Last year I bought my first digital camera – a Leica, an unassuming black box (not unlike their first cameras of the last century) – only this was a modernist box, and herein lay the attraction for me. This was going to be just perfect to make my long overdue series – my response to my father’s expectations for me to become an architect.

…he brought me up to be modernist to the core and to be deeply interested in all things architectural. Although I could never live up to his expectations and become an architect myself, with his professional instruments (a family heirloom) and now with this perfect camera, I have at last made this tribute to him.

When I was I child, these instruments were on his table – always to be respected and not to be touched. So this is an homage, albeit with a measure of rebellion on my part!

She concludes with his enamelled business tile “Werner Tibor: Architect” placed on a photograph of distressed brick wall, which rescaled, becomes a monumental epitaph.

A visit to her website will reward you with a hundred more insights into the life of objects and prompt you to ask why this artist is not better known.