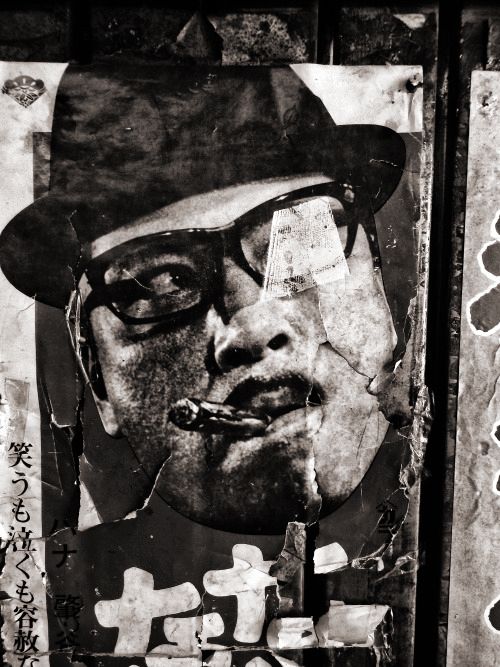 February 22: It is in the nature of photographs to provoke.

A solo show of work by influential Japanese photographer Daido Moriyama opens today at Michael Hoppen Gallery, 3 Jubilee Place, London until 29 March. The Gallery opened in in the heart of Chelsea in 1992 and often presents ‘new and interesting artists’ alongside better known nineteenth, twentieth and twenty-first century photographers, in a format that prompts much notice.

Consequently, this is a crowded and rich exhibition of Moriyama’s work, its distinctive style over a bewildering range of subject matter; from the city street to found still-life, the incidental nude in rent-by-the-hour hotels, and landscape as well as photograms and photomontage there is a consistency of vision that goes beyond his habitual high-contrast printing, his are-bure-boke; rough, grainy, and unfocused images that were then and are now so widely imitated.

It is as if the 35mm frame is just too small to accomodate the muscular, often sexual, energy so that subject matter is rammed in, cemented into the print with heavy vignetting or blank, burned out highlights.

Coincidentally today, to my delight, I found in my letterbox the first issue of the journal A/FIXED that I had ordered at the end of January (it takes a while for deliveries from the USA to wing their way here). The publication is in tabloid form and is thus a surprisingly reasonable price at $US3.99 & International $US8.99…so great value even in the Antipodes at around $A16. Its value to anyone with an interest in Japanese photography is immediately evident. I have looked here at onthisdateinphotography at the work of Moriyama briefly in other posts and he is probably the best known of the Provoke group to which this inaugural issue of A/FIXED is devoted, and his links with European and American photography are well documented. Provoke was more than the small-scale magazine published only three times in Japan between 1968 and 1969; it was a movement.

However, the language barrier prevents one feeling entirely confident of having the whole picture of this revolutionary style. This problem is framed in an eloquent first-person essay by Pete Duval, his thoughts on a visit to Tokyo, unaccompanied by any knowledge of Japanese language, entitled Two Weeks in Tokyo: For a Language (Probably Never) to Come. You can read it on the A/FIXED blog or enjoy it in on paper under the petrol-scented Takuma Nakahira shot of a revving muscle car; should you obtain your own copy of this journal you will see how well the quality of ink and dot-screen on newsprint translates the visual language of Provoke.

Duval describes himself as wandering Tokyo like a lost child in a nameless labyrinth,  explaining his condition in reference to Nakahira’s words;

In our everyday life, we see the world as something that has already been clarified. Otherwise, it would probably be impossible to live a stable and continuous life. But in reality, what do we know about the world? Don’t we just believe that we know something about it?

Without language the American in Tokyo is thrown back on a more primitive engagement, eating fruit because it needs no label as a survival strategy and because, “If I wandered as an illiterate, I became more literate with regard to my senses.” This comes home to him most vividly on receiving the translations of interviews he recorded with photographers. On seeing their words in English, he is astonished that when he was listening to them how his senses, his reading of their body language, left him with quite different impression of what they were in fact saying. He concludes by asking which was more accurate, the linguistic or sensual impression.

Try getting Google to translate a passage of Nakahira in the original Japanese into English. What emerges is a jumbled haiku, with an odd, disjointed meaning but perversely poetic or hilarious.  The language barrier means that to understand Japanese photography requires more than a literal transcription and the reader of A/FIXED is in the capable hands of translators Lee Heward and Keasha Misiaszek.

Kazuo Kitai. Photo made during interview by Tsuyoshi Ito for A/FIXED 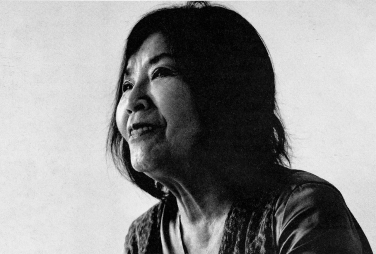 Hitomi Watanabe. Photo made during interview by Tsuyoshi Ito for A/FIXED

To add further complexity, the Provoke group were setting out to create a new photographic discourse, to reinvent it…’for a language to come’ (the title of the first photobook by Takuma Nakahira, 1970, discussed in The Intersection of Language and Photography in Takuma Nakahira’s ‘For a Language to Come’ in this issue of A/FIXED.)

To this end, Editor Tsuyoshi Ito provides in A/FIXED an intermediation, not a mere guide, that leads through interview directly to the photographers, the commentators in Japan and to curators like Simon Baker, from 2009 Tate’s first Curator of Photography (now in a new role as director of the Maison Européenne de la Photographie in Paris) who staged William Klein + Daido Moriyama  in 2012. He describes the unifying factor in the diverse image-making of Moriyama and of the Provoke movement as a whole as  an experimental ‘openness to chance’ and, echoing Nakahira,

to give a sense of the perspective from which the person making the images is seeing the world. So it’s about experience—how do we experience life in the world around us?

So it is with Moriyama, whom we should recognise not as an historical figure, but as still a current force, who of his latest book released in 2015 says;

The title of this book, Dog and Mesh Tights came to me suddenly one day recently as I was walking through the streets of the Ikebukuro district of Tokyo. Most of the subjects depicted here are those that I spotted on the streets, on the exterior walls of buildings or lying in the gutter during the course of my everyday life, things that tend to remain unnoticed, obscure corners of largely deserted back alleys, or human figures that linger inconspicuously – things that catch my eye but generally remain unremarked. In a way I think they can be said to resemble the world as seen through the eye of a dog.

It is the book form to which Baker refers in his interview when talking about John Szarkowski’s 1974 New Japanese Photography exhibition at MoMA, emphasising that;

photography in Japan is about the series: it’s about groups of images; it’s about the book—and he said this in 1974. I think it has taken a long time for the rest of the world to learn that lesson and say, well, let’s not just focus on one famous image—Moriyama’s Stray Dog, Misawa, Aomori (1971) for example—but let’s try to understand where it came from, what the series was, how he was working, what he was doing.

Two articles provide the background on the development of the photobook in Japan; On the Materiality of the Japanese Photobook,Maht Well’s Kazuhiko Motomura’s Yugensha: A Singular Publisher, and A Visit to the Benrido Collotype Atelier, as well as Provoke: The Authoritative Volume by Evan Laudenslager on Verlag’s volume that republishes all three Provoke magazine issues.

As an example of this fine art publishing, along with my copy of A/FIXED came a collotype, work of Kazuo Kitai printed by Kyoto’s Benrido Collotype Atelier, a lovely print of an unlovely subject Forced Eviction, from his series Sanrizuka of 1971. Where Moriyama was little interested in politics, several photographers associated with Provoke thrust their cameras between protestors and police.

In 1965, at the age of twenty, Kitai published his first book, Resistance, which pictured the 1964 demonstrations near the U.S. Navy base in Yokosuka. In 1960, the U.S. and Japan had re-signed a security treaty known as Anpo, which maintained U.S. dominance in East Asia, and allowed American troops to be stationed in Japan indefinitely. That led to campaigns to return Okinawa to Japanese control. He went on to document the anti-Narita Airport movement protesting evictions forced to make room for the airport. In 1968 student protests were widespread, in Japan just as in Paris, Britain and the United States, against nuclear armaments and the Vietnam War.

That aspect of Provoke is introduced by Pete Duval and continues with interviews by Tsuyoshi Ito with Rei Masuda and Hitomi Watanabe that expands an understanding of the gutsy, grinding imagery of political side of the movement.

Useful profiles of each of the Provoke members are given space at the end of this issue which contains still further articles that I don’t have room to cover here. In all, this is a purchase I am very glad to have made.