February 19: American Abstract Expressionism was an influence on two quite different international photographers born on this date; Eiko Yamazawa and Gerald Incandela.

In both cases, a training in traditional media of painting and drawing, and an exposure to the art of the New York School and Abstract Expressionism, are formative influences which came to them from their mentors.

Yamazawa had traveled to the USA in 1926, and later in 1955 at the height of the flowering of Abstract Expressionism, the new painting style the ingredients for which were largely imported from Europe, arriving with the wartime and postwar migrant artists. The seeds of her later abstractions, which share much with that of Hans Hoffman, were sown when as a child she loved making sun pictures (on printing-out paper);

It’s a primitive way of making pictures with photography materials using leaves, pebbles and other small objects, which are then traced on the photo paper by the sun. It was so much fun. I’d go outside with a pile of contact frames, stacked from my waist to my chin, almost more than I could carry. And I’d lay them all out and at the end of the afternoon, I come back with so many beautiful pictures. 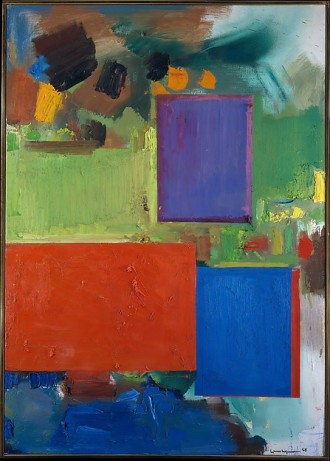 Born this day in 1899 in Osaka, Japan, Eiko Yamazawa studied Japanese painting at Joshibi School of Art and Design, but around the time of her graduation Yamazawa attended meetings with Raiteu Hiratsuka, editor of the magazine Seito, the first literary magazine in Japan for women, published by women from 1911 to 1916. Yamazawa became convinced of the importance of women’s independence. Following graduation she studied English and was mentored by Haruko Asai, director at Osaka’s YMCA, who gave Yamazawa opportunities to photograph group portraits and documentary photographs, and purchased her paintings.

With Asai’s help Yamazawa obtained a passport to travel alone to the USA in 1926, at a time when Japanese people, and especially women, would travel overseas. There she studied oil painting at the California School of Fine Arts and worked as an assistant to the photographer Consuelo Kanaga (1894–1978) who had just set up as a freelance and who encouraged Yamazawa’s decision to become a photographer.

In 1928 Yamazawa traveled to England and France, where she had an opportunity to appreciate European art. She returned to America to work for Kanaga and the Hungarian photographer, Nickolas Muray (1892–1965) for whom she did portrait photography in New York, developing a unique lighting technique useful in her later abstract work.

Returning to Japan in 1929, she submitted landscape photographs she had taken in America to the Third International Photo Salon, and they were accepted for exhibition. In Osaka her business in portraits of well-known cultural figures, financiers and businessmen boomed, resulting in a 1932 solo exhibition entitled Portraits of People of Culture.

In 1938 she opened the Eiko Yamazawa Studio in Suo, Minami ward in Osaka where as one of the few women photographers in the city, she made portraits  in a modern style and employed female assistants, which was unusual in its day. The war drove her into refuge in the countryside with Yasue Yamamoto, an actress, though she returned to make documentary photographs as part of the war effort. An Allied bomb destroyed her Osaka Studio, but determined to continue her work, she left the city for the safety of Shinsu, a town known for its pure water, valued in making tofu, which Yamazawa found ideal for developing and printing her pictures.

During war time, you don’t worry about where the ideal place is to live. You just go and make the best of it. You can’t dwell on your personal troubles. I went to Shinshu where they make tofu. I measured the water temperature and it was perfect. Then I knew I could continue working, and trying out new things. I never stopped taking pictures.

Her costume shots of Yamamoto during this period were made public in 1960.

After the war she established Eiko Yamazawa Photography Research Institute at Hamachi Hospital Annex to educate young women photographers, and continued her photography business. Her photography book Quest (1951) won the Osaka Prefecture Art Award in 1955, and in the same year she reunited with Kanaga in New York for the first time in 27 years.

From 1952, Yamazawa had started using photography as a means of abstract expression, which became her signature photographic style which she came to from her restlessness and interest in photographing from unusual angles.

In 1960 she quit her job as a commercial photographer and abandoned realistic portrayal entirely for abstract art; introducing her photography book Watashi no Gendai / What I’m doing  (My Modern Age) published in 1960, Yamazawa stated, “Realism has vanished [from my work] without a trace.”

Social problems, they are not important to me. The point doesn’t seem to make much sense. Art is just art, isn’t it? I don’t care about those other issues.

In 1965 she spent half a year traveling in Europe and America. 1968 moved the studio to Kobe and from 1979 to 1986 she held annual exhibitions also entitled Watashi no Gendai (わたしの現代). 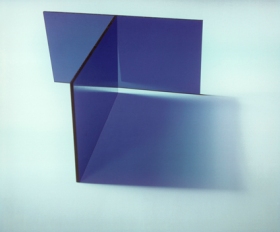 Yamazawa’s use of chipped and peeled paint as objects in her work brings it very close to painting, but frequently she uses a reflective surface to modulate and distort the colour.

Paint, no, what do you call these things? Oh yes, paint chips. This one I made from paint chips, when I was working at a paint company. And this one here I made from scraps of cut paper. I make the designs first. I am not interested in something that already exists. This is what makes my work different from other photographers.

In 1976, the aristocratic Sam Wagstaff, the collector of photography who championed Robert Mapplethorpe, met the French photographer Gerald Incandela, and persuaded him to move to New York, buying more than thirty works that are now held at the J. Paul Getty Museum. Incandela, regarded as a threat by Mapplethorpe who was then estranged from Wagstaff, did not enter a physical relationship with Wagstaff, who then withdrew his patronage, but only after including his work in Photographs from the Collection of Sam Wagstaff at the Corcoran Gallery of Art in 1978.

Born on this date in 1952 in Tunisia, Gerald Incandela studied in Tunis and in Paris in 1969, where he received a philosophy degree and studied art history. It was while in London in 1974 that he took up photography and learned to print by making copy prints of drawings for a London art dealer to offset his darkroom expenses, which inspired him to develop a photographic process that merged drawing and photography.

In the darkroom, Incandela combined  multiple negatives with selective application of developer and fixer with a brush to reveal and animate selected elements , as in the vase of flowers in his Thilo von Watzdorf and his Parents (above). It is intriguing to imagine how he made his next steps toward more expressive application of darkroom chemicals.

In making  his joiners, which predate Hockney’s, he had to line up the images on large sheets of photographic paper in the darkroom. One expedient he appears to be using is to paint over the paper with developer to reveal the first printed image, paint again with fixer or acetic acidic to ‘stop’ the image, and line up the next negative to be printed by replacing the paper under the enlarger with a red filter over the lens before repeating the process. The method would avoid the necessity of using complex masks on cumbersome sheets of paper (frustrating in my experience). The soft edges of the images in Thilo von Watzdorf and his Parents  and other prints below are evidence that this is likely to be his method. (Thilo von Watzdorf is an actor, known for Sebastiane, Derek Jarman’s 1976 gay costume movie in which Incandela also acted, as the ‘Leopard Boy’)

After moving to the USA his gestures become more painterly. He exploits exposed areas around small images to expand on an idea…

…or picks up on a brushy silhouette like foliage to complement his painted-in blacks.

In a 2010 interview Incalenda says;

I call these works “photographic drawings,” because I think they’re different from the traditional function of photography. Photographs are perceived as being able to stop time, or at least they make an effort to extend it with narrative. My works do not make that same effort. And in terms of procedure, when developing the negative in a tray, I use a brush to create expressionistic marks, so there’s an element of handwriting.

Unique attributes of film and chemistry account for the effects achieved by these artists. Incandela, in his 2007 images above, maintains his love of traditional photographic materials despite the advent of Photoshop. It might make his montaging seamless, but he eschews it for leaving evidence of his ‘joiners’ on the print.

Imagery and effects of the kind he produces would not occur to someone standing before a monitor; it is the liquid quality of his medium that has suggested the effects that have become so fluent in his equine series.

Yamazawa had stopped practicing photography and had died before digital imaging appeared, and her imagery makes use of reflection into mylar and glass in place of distortion in processing, and their sense of reflectivity is no doubt enhanced on viewing her high gloss Cibachrome prints.

One thought on “February 19: AbEx”