February 5: Art is the vehicle of fantasy and fiction, even when it’s a photograph; let’s not forget that.

Foam Fotografiemuseum, Keizersgracht 609, Amsterdam, awards the Paul Huf Award annually to talented international photographers under the age of 35. Previous winners include Americans Taryn Simon (2007), Alex Prager (2012), Daniel Gordon (2014) and Japanese photographer Daisuke Yokota (2016). The prize includes €20,000 cash and an exhibition at Foam Fotografiemuseum (Foam Photography Museum). The Prize is named for photographer Paul Huf (1924–2002),  who began in 1946 as a photographer at the theater company Comedia

Paul Huf (1924–2002) was the son of actor Paul Huf Snr. and began in 1946 as a photographer at the theater company Comedia before working in advertising and fashion and is best known for his “Craftsmanship is mastery” Grolsch beer ads, a campaign that ran for thirty years with great success.. Paul Huf’s name is used also for the Grote Paul, awarded to a photographer selected by their peers.

The gender clichés of Huf’s 1961 fashion shot above is apposite to those in work 50 years younger (below) from Foam’s 2017 Paul Huf Award winner Romain Mader (*1988, Switzerland). His The Following is a True Story is the commissioned exhibition. It closes on February 7 so there has been plenty of time for reaction, which has been intense.

A change.org petition has resulted in an open letter to Foam and the award jury…

…we would also like to draw the attention of the distinguished juries of The Foam Paul Huf Award to the fact that we find it absolutely unethical and thus unacceptable to use senseless humour and disrespectful naivety shown in relation to women, regardless of their nationality, and to publicly financially and institutionally support this sexist humour – instead of (in case of Mader’s series) expressing empathy to a country in war which Ukraine is at the moment.

objectification (seen from the very name of the series),

ignorant generalisation (substituting pictures from Ukraine with those taken in another country, namely Belarus)

and devaluing (disregarding of economic and political premises of the “funny” phenomena).

The Following is a True Story continues the theme that first appears in Mader’s student years when he and Swiss friends traveled to the Ukraine in 2009 (he was 21) the year of the gas crisis that deepened the animosity toward Russia. He admits; “We didn’t know so much about the country, we had the same stereotypes as most people in Western Europe.”

In that year he produced Moi avec des filles a series in which he poses himself in front of ‘hostesses’ who appear on the daïs at car shows beside, in or on, the vehicle to promote what the merchandisers conceive of as an association between cars and beautiful women. Such assumptions are ridiculous, of course, as they are not only sexist but expose the poverty of consumerist desire based on appearances, but that’s marketing. 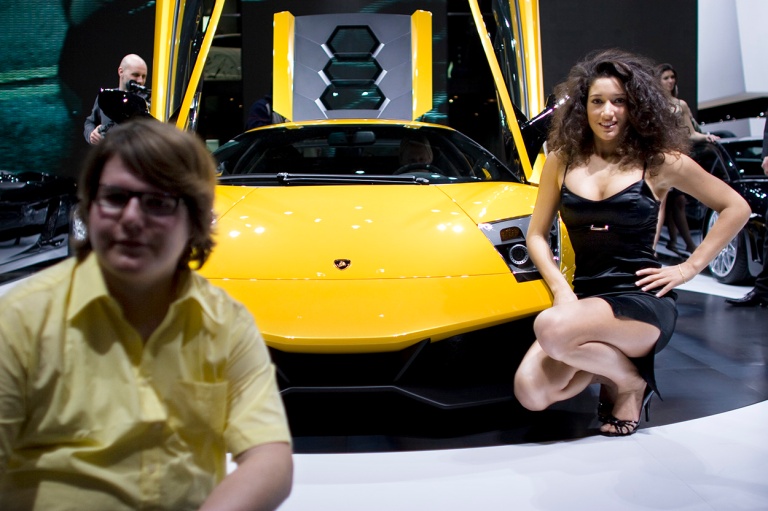 The women in the photographs maintain their public personas, as they are paid to do, and their cool, displaying bemusement or indulgence if anything at Mader interposing himself, mostly out of focus and looming mawkishly into the foreground. He sets himself up as an inadequate sop who buys into the whole delusion, one for whom this is a subterfuge to ‘get with the girls’. 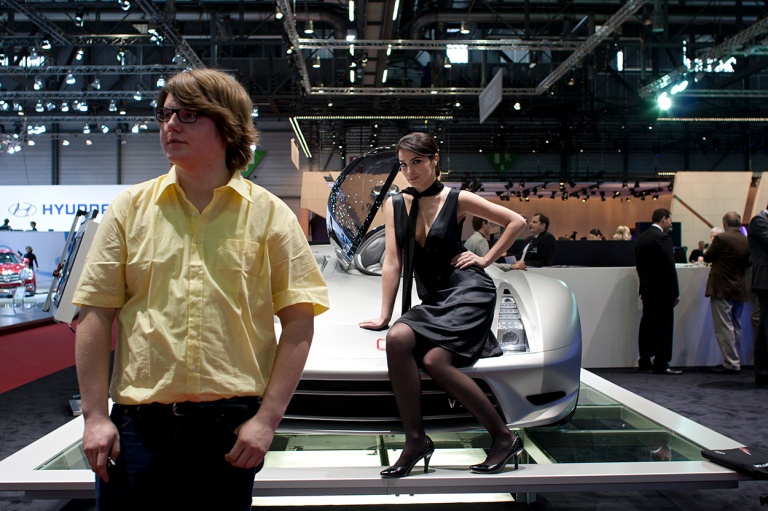 The selfie is the mode he uses in most of his imagery, and this continuity makes it clear he is the butt of his own satire. This device, and the persona he was developing as a gormless no-hoper with women, evolved into Ekaterina during his Bachelor Photography at ÉCAL in the University of Arts & Design in Lausanne during 2012.

In it he depicts himself searching for a bride in in his wet-dream of a city in the Ukraine called Ekaterina, inhabited only by women, and all called Ekaterina. The series, and a video that provides commentary to the images, is part of the Foam exhibition, which consists of several projects. They jointly form a fictitious narrative about a dorky and naive young man in search of happiness.

The phallic presence of the Matterhorn above, the car shows, this kitsch Sound of Music alpine idyll and a fake marriage, all conjure and contrast with one-time celebrity American artist Jeff Koons (*1955), his 2010 BMW ‘Art Cars’ and his photographs celebrating his seven-year marriage in 1991 to Ilona Staller (*1951). Where Koons is concerned ostensibly with the “obscene promiscuity of consumer signs”, it is hard to separate his supposed critique from his own blatant self-promotion, while Mader denigrates himself and exaggerates his assumed crass prejudices to the point of absurdity.

This project should be seen in relation to his collaboration with Nadja Kilchhofer (*1988), once his fellow graduate of ÉCAL, who currently works at the Institute of Art History, Universität Bern as a researcher in Performing Arts and Visual Arts.

Their joint documentary project complements the exploration of ‘sex tourism’ in Mader’s Ekaterina in which Kilchofer appears as one of the Ukranian ‘Ekaterinas’. In 2013 they followed an aspiring young model, fifteen years old, who was one of the many from Eastern Europe being marketed by Russian agencies to the West;

We wanted to realize the work in pairs, as we otherwise work as a collective. We had the idea of ​​this documentary which we developed together from our shared fascination with Russia. Romain had also already made personal projects in Belarus and Ukraine about “sexual tourism”. In Siberia, young models are sought constantly. The model scouts are looking specifically girls between 12 to 16 years, the younger the better, so that they are easier to manipulate and still have a certain innocence. Most importantly, they eagerly accept any offers made to them by agencies. They accept such contracts without thinking about it or taking consequences into consideration. We wanted to meet these girls and their families and to accompany them in their private lives and on their way to becoming models. In the report we set aside the tourist clichés of Russia and focused more on the girl and her view of the country. The question or even more importance, what makes this girl so special, is at the centre of this work.

Of the effect of his Ekaterina series and the video that accompanies it Mader, who in real life remains single, admits on his website;

I find it very strange how people ask how my wife is doing, I didn’t think the audience would actually believe the story, but of course I wanted it to look real. Honestly I didn’t think it would have that much success.

Regarding suggestions that he is promoting negative stereotypes about Ukraine and its women, Romain explains that the women in his photographs are his friends, friends of friends, and activists from the militant Ukrainian group femen (below) who would be sure to explosively blow his cover if his was merely the ‘some of my best friends are…’ defence.

Many of the clichés and prejudices about the Eastern European bloc to which Mader refers come from poor understandings of these countries as they emerged from the collapse of the Soviet Union in 1991.

In the depressed depths of Lithuania Rimaldas Vikšraitis lived for several decades in small villages deep in the countryside, whose inhabitants lived with poverty, alcoholism, promiscuity and futility, picturing them prior to and amid the devastating fallout of the collapse.

His highly subjective photographs are painful to look at but contain some unexpected evidence of joy and solidarity. His series, exhibited and published as visual narratives beginning with Slaughter (1982-1986) then followed by Nude in a Desolate Farm (1991) and This Crazy World (1995). His latest, Grimaces of the Weary Village includes shots from  1976 through to 2006.

However, the self-portrait above makes it clear they should not be taken for straight documentary any more than should Mader’s Ekaterina as there is always a performative element and a collaboration with his subjects;

When I have an idea, but no model, I use myself. There is no difference [whether I stand before the camera or other people] and though not always my choice; when there is an idea and has no chance to recruit someone else, I am forced to use myself. And that’s it. I did not model for these images because my life or the world are beautiful.

Both photographers, in their own way and within the conception of photography of their eras, illustrate social conditions in the Eastern European bloc that are unacceptable.

Vikšraitis, born in 1954 in Sunkariai, Lithuania knows the reality all too well. He grew up “between marshes and clay” in the isolated Šakiai district where “You couldn’t get out to the world without a large pair of wellingtons.” At 17 he bought an old Soviet Smena 8 camera for 15 roubles and began photographing friends and neighbours in his native village. The nature of the camera contributes to the atmosphere of his monochrome imagery.

The Smena series is a cheaply made viewfinder 35mm film camera first introduced in 1953 by GOMZ trading later as MMZ then as LOMO (Leningradskoe Optiko Mechanichesckoe Objedinenie).  Смена (Smena), meaning ‘next shift’ or ‘next generation’, was meant to appeal to soviet youth, and when two Austrian marketing students traveling after the decline of the Soviet Union bought an LC-A in 1991 they discovered its amazing colour and saturation and the Lomography fad was born.

Now living in Kudirka Naumiestyje, he graduated from Vilnius Secondary School in 1975 to a specialisation in photography at Technical School of Vilnius. For ten years he worked as a photographer at the Šakiai Household Consumer Service and on wedding commissions.

Since 1985 a Member of the Union of Lithuanian Art Photographers, in 1997 Vikšraitis was awarded the honorary title of the FIAP photographer’s (AFIAP) International Fine Arts Federation 2000-2001, and in 2003-2004 won the individual state scholarship of the Ministry of Culture of the Republic of Lithuania.

After nomination by Martin Parr (*1952) Rimaldas Viksraitis won the 2009 Discovery Award at the photo festival in Arles. Since then, his works are exhibited worldwide.

One thought on “February 5: True?”