Only now, in writing about a current exhibition of an important photography project of the same era by Marianne Wex (*1937), do I miss this cheap pop-psychology book. It was subtitled How to Interpret the Hidden Psychological Meaning of Personal and Public Photographs. Its premise was that encoded into images of people was information that could be useful to understanding human relationships and psychology.

For my tertiary photography students it was a formative exercise to ask them to analyse each other’s family photographs using Akeret’s methods; to determine their chronology based on content and technology, to discover who was behind the camera, who archived the prints, to find evidence to help interpret qualities of relationships of the people pictured, then to test these hypotheses by asking the owner if they were true.

In the hands of the amateur who was going to have their film processed and prints made by a lab such interpretation could legitimately be made since little construction went into making the image. In most cases it was a recording, usually by Dad, organised into albums by Mum, of what was regarded as a ‘happy family event’, like a holiday, birthday or feast like Christmas. We all know from recent experience the heightened emotions of such happenings, and in the ‘personal’ photograph, defences are down, and consciously- and subconsciously-made gestures and body language can convey a great deal about family psychology. 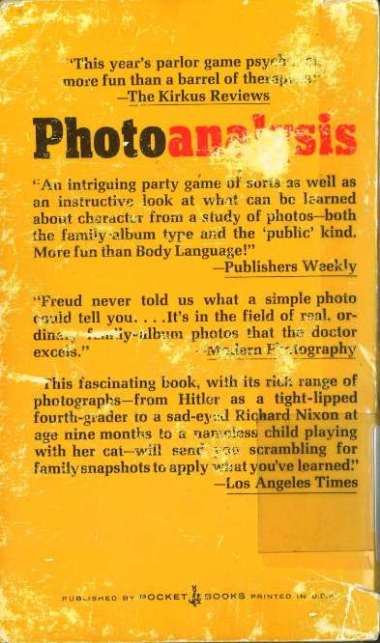 So far, so good, but the second half of the book’s subtitle extends the approach to ‘public’ photographs, such as documentary or publicity pictures of Hitler or Richard Nixon. An example I remember gave that idea credence; a photograph of crew from the USS Pueblo seized on January 23, 1968 by North Korea, are seen huddled together with their hands on a table. All looked at their captors’ camera with dogged expressions, but each surreptitiously held their middle finger of one hand extended onto the table in a gesture of defiance that, Akaret asserts, gave hope to the relatives when the P.O.W. photo was published in America where the gesture was understood. That is a special instance however, since the ‘hidden message’ was intentional.

A photojournalist is not like Dad taking the family photograph, but is a professional hired to interpret the subject, often in collaboration with a reporter, and like reporters they may be held accountable for their interpretations and representations. They pride themselves in having consciously arranged everything in the frame to convey a narrative, and their subjects, as public figures, are just as canny. As A.D. Coleman pointed out in 1977, the year Susan Sontag’s On Photography was released;

An example of such intentionality can be found in the work of Austrian photographer and photojournalist Barbara Pflaum, born Hansi Barbara Gebhardt on this date in 1912 (†2002). She was at Die Presse from 1955-1977 covering domestic news, fashion and culture, and soon became known as the ‘Grande Dame’ of Austria’s press photographers.  Her news photos of Franz Olah (1910 – 2009) and Maria Callas (1923–1977) present very readable examples of both  ‘body language’ and symbolism. In the case of the Austrian politician who was Interior Minister from 1963 until 1964 as member of the Social Democratic Party (SPÖ) Pflaum records Olah’s injured expression and underlines it with the Austrian coat of arms framed to loom behind the subject’s head as he receives his sentence in court. His career ended in a financial scandal and though after release he attempted to set up a new party, the now defunct Demokratische Fortschrittliche Partei in 1965, it garnered only 3% of the vote in the 1966 election. Trained at Vienna School of Applied Arts and 1948-1952 Pflaum’s professional breakthrough came when she documented the reopening of the Vienna State Opera. By simply asking Maria Callas to hold a program Pflaum’s picture refers subtly to her disappointing recent reception at Milan’s La Scala in 1956 during a scandal over the effect of weight loss on her voice, which was in contrast to the twenty minutes of tumultuous applause she received in Vienna’s Staatsoper.

Akeret developed his ‘photoanalysis’ as a successful working Manhattan psychoanalyst whose innovation was to ask his clients’ family photographs to discuss in treating them, and in the book he is at pains to make clear the dangers of over-interpretation, but he once said to a NYT interviewer;

I think people are visually illiterate. They are not reading photographs like a book, from left to right. I show people photographs all the time, and there are things that most people just do not see.

Is it the sales pitch for the book — “…more fun than a barrel of therapists” — or a sensationalist editing by Thomas Humber (author of The Fifth Gospel : the miracle of the Holy Shroud : [is this a photograph of Jesus?] also of 1974) that causes Photoanalysis to turn what is an important idea into “This year’s parlor game…” by trivialising an important property of this universal form of communication when it still deserves serious attention?

Currently getting well-warranted and serious attention is #MeToo, which spread on social media after October 2017 to denounce misogyny, sexual assault and harassment in a groundswell prompted by sexual misconduct allegations against Harvey Weinstein. Given such focus, the exhibition at Tanya Leighton Gallery, Kurfürstenstraße 156 & 24/25
10785 Berlin is, regrettably, ever more relevant.

Marianne Wex – Let’s Take Back our Space, with a preview tonight 6-9 PM, is the first solo exhibition in Berlin of German artist Marianne Wex’s pioneering project about male and female body language, Let’s Take Back Our Space: ‘Female’ and ‘Male’ Body Language as a Result of Patriarchal Structures (“‘Weibliche’ und ‘männliche’ Körpersprache als Folge patriarchalischer Machtverhältnisse”) of 1977, the year of the publication of On Photography and only 3 years after Photoanalysis.

Having trained as a painter at the Academies of Art in Hamburg and Mexico City, and then as a professor at the Academy of Art, Hamburg from 1963 to 1980, Wex admired the figurative art of Paula Modersohn-Becker. She was no doubt familiar with catalogues for artists of photographs of human figures in various poses. Her project consisted of such photographs that she made herself in the streets of her native Hamburg between 1972 and 1977. Hers became encyclopedic, an enormous image bank of 5,000 images of men and women made in order to document and demonstrate their culturally-influenced gendered differences in poses.

In 1977 the work was exhibited for the first time in the exhibition Women Artists International 1877-1977 in the Neuen Gesellschaft für Bildende Künste in Berlin where it attracted considerable attention. A conceptual artist’s book followed in 1979.

Wex supplemented her own photographs with images rephotographed from art history books and mass media; photojournalism, advertisements, pornography, junk mail, and publicity. You may recognise below an image Wex has taken from American Bill Owens  own classic project on the stereotypes of Suburbia published 1973.

In both book and publication, Wex’s images are cropped to a uniform height and presented in rows of separate male or female panels, subdivided for direct comparison according to specific varieties of postures and poses. The different width of the segregated images literally ‘speaks volumes’ — males ‘manspreading’ (avant la lettre), can be seen to take up more horizontal space.

Revived interest in Wex’s work resulted in it being shown for the first time in decades at Focal Point Gallery, Southend in 2009 and then in a more comprehensive form at the Badischer Kunstverein, Kalsruhe in 2012.

Wex’s project confirmed her assumption that;

body language is the result of sex-oriented, patriarchal socialisation  affecting all of our ‘feminine’ and ‘masculine’ role behaviour […and that…] body language and bodily ideals between sexes have become increasingly divergent.

Her resulting visual survey is unique in combining the traditions of figure and motion studies and street photography with conceptual typologies for a convincing feminist political statement that is as still bitingly relevant as ‘body language’ itself.