January 1: Why does surrealism work so well as photography?

Two photographers associated with this style were born on this date; Salvador Dali‘s photographer and biographer, Robert Descharnes in 1926, and Chema Madoz in 1958.

Descharnes was a ship’s photographer when he met Salvador Dali in 1950, collaborated with him in making copious pictures of him and a film that was never released and in 1981 became the artist’s secretary and publicist. 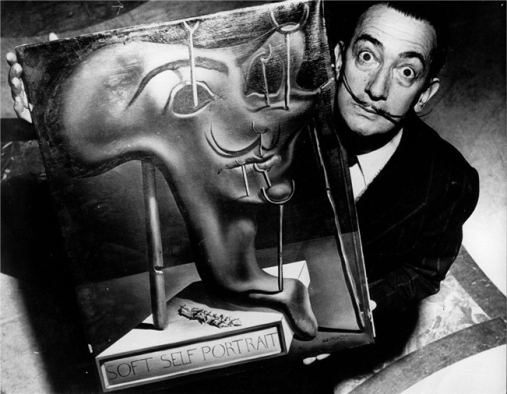 Though Descharnes’ photographs are of a Surrealist, are they surreal? Dali indulges in play for the camera that with hindsight now looks positively Monty-Pythonesque, his acting more vaudeville than dramatic.

Chema Madoz has different intentions. He is as playful as Dali, and a better photographer than Descharnes,  and his play provokes us to to take a second, questioning look at the objects with which we surround ourselves.

When you reach into the cupboard for a mug for your next coffee or tea, which one do you select? Are you the kind who is happy to pick any of the ones you find there because they are all of a particular style that suits you? 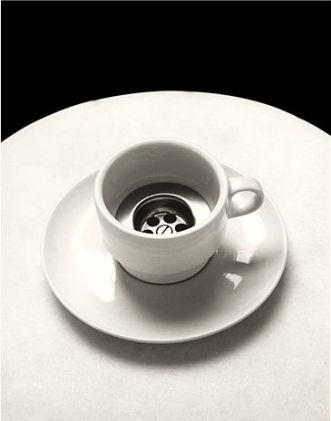 Or do you have an assortment, some of which you prefer over the others, and even a particular one which you will choose over all the others. What is it about that mug? And what is so despicable about that one up the back that you would never use unless you had to, and then only knowing that you won’t enjoy the drink? Inanimate objects, we must admit, have characters, or should we say personalities, or even souls. If you were to pay a little more attention, what would they say to you?

Spaniard Chema Madoz knows. He listens to what objects say, and then he listens to what they say to each other. They’re just ordinary things; mugs, shoes, matches, books, chessboards or ladders. Too banal to have ever been invented, we feel they must surely always have existed, evolving into themselves through the hands of countless human makers, through the choosing of millions of owners’ lifetimes. 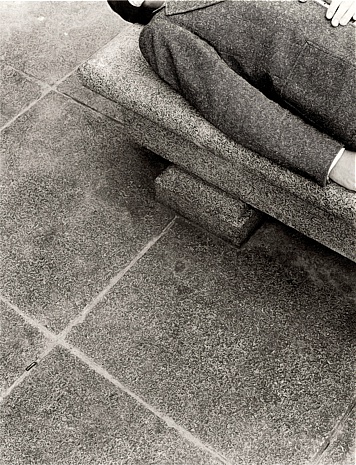 Madoz pays no attention to the laws of physics. He’s no realist, but an illusionist. He’s a visual alchemist vitally aware that his discipline is to divine the essences of the things. In the black box of his camera they transmogrify into their true gestalt. They become like the pictures in the baby’s alphabet book; don’t talk about utility, to the baby some of them become friends, others, well you’ll just have to turn the page or I’ll scream!

Is it about ‘affordance’ which is gradually becoming a buzz-word since psychologist James Jerome Gibson introduced the term in his 1977 article The Theory of Affordances and expounded on it in his book The Ecological Approach to Visual Perception? In this psychological realm there is a logic that is human-centred (the cup handle is for picking it up) for which Madoz has no time, since his interest lies in discovering the psychology of the objects and their relations. Certainly some of these derive from haptics and the way we put speech together, but an eggcup looks nothing like the one Madoz has found…

…and when asked if he is more a poet than a visual artist he says “a poet explores a word’s resonance and meaning to the same degree as I explore an object.”

From within his well-stocked studio, the photographer selects objects; it is a cabinet of curiosities all of which wait to be revealed. Born in 1958 in Madrid, Chema Madoz discovered photography in the early 80’s, during the creative burst of the La Movida Madrileña (‘The Madrilenian scene’), a countercultural movement occurring mainly in Madrid during the Spanish transition out of oppression after the dictator Francisco Franco’s death in 1975, as the economy was resurrected and a new Spanish sense of national and individual identity asserted itself. Of his training he says:

I initially studied History of Art at the Complutense University in Madrid, where I started attending beginner photography courses. There were no professional courses back then and the possibility of using photography as a language was hardly considered. What immediately drew my attention was the opportunity to convey ideas and order the world as I see it via photography.

Does this picture represent the place where it all began? 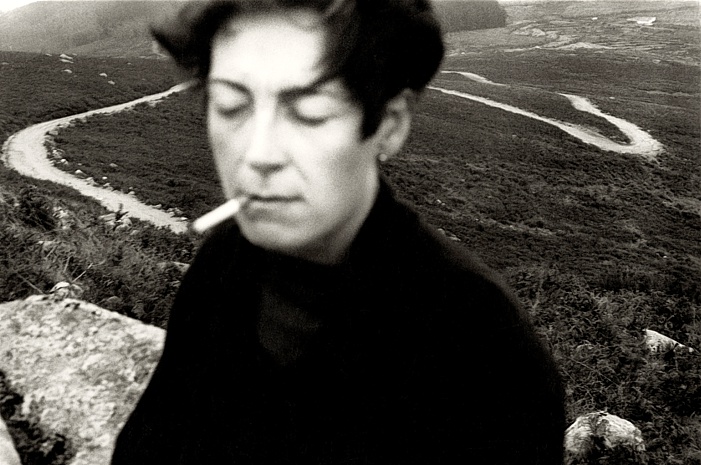 It is hard to find dates with which to match Madoz’s progress to particular images. Judging by the grain, this one must be early because he switched to the Hasselblad not long into his career.

What this picture shows us is his dawning awareness of the flatness of the photograph, the way that even in the most straightforward photograph things can end up on top of each other. Like the way that power pole grows out of grandma’s head in that old snapshot, the winding path trails from the cigarette. Is this intentional, or is it a happy accident? There are no signs that the photographer has prepared to create the effect when he was wielding the camera; would it not work much better if the smoker were in focus? But it might be that his aim was to turn the human subject into smoke…they are after all partially atomised by the very visible grain. 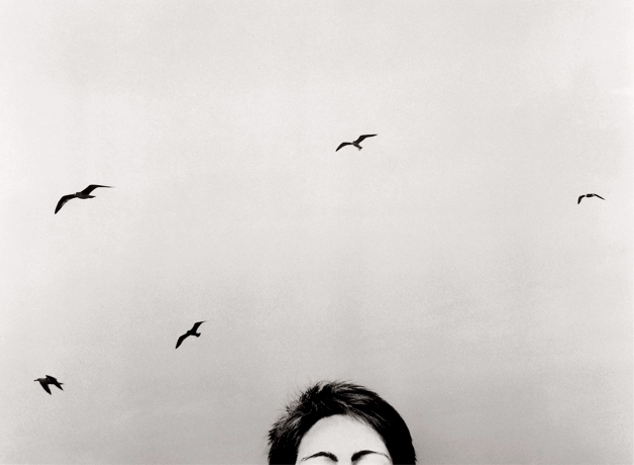 …but depth of field and grain are no problem here.

We do have the date of 1985 for the following triptych, of this dapper architect who builds in his own image, and here things are very much more under control; focus is carefully selective, with the background in shot two remaining intriguingly out-of-focus while everything else is pin-sharp. 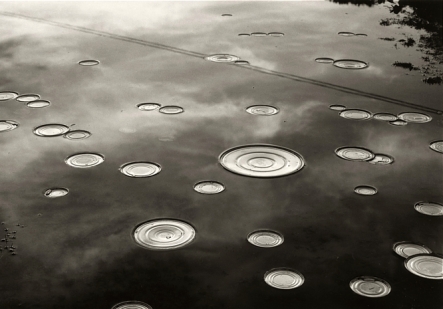 …and how the objects presented, here the lids of tin cans or their imprint in the sand, are so clean-cut, presented as if they are ‘ideal’ not real. This is an essential characteristic of the paintings of Surrealists René Magritte and Dali too; a suppression of any sign of the expressive mark. 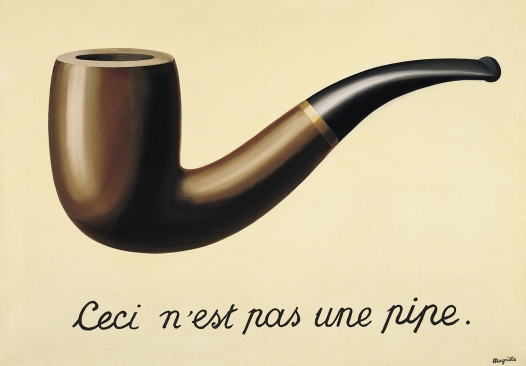 To see Madoz’s treatment of Magritte’s pipe – not a pipe but a musical one – is to realise that Madoz is as much sculptor as he is photographer, and to see how he embraces the principles of the Surrealist movement. Neither pipe can be smoked. You could no more stuff Magritte’s pipe with tobacco, as he famously asserted, than you could ‘draw’ Madoz’s. Both are just representations of a pipe (remember baby’s alphabet book), but because Madoz’s representation is photographic and he must deal with a real pipe in his studio, the solution to creating a surreal tease is to alter the object. Text underneath it alone will not do; one would find it difficult to believe ‘This is not a pipe’ when clearly it is a photograph of one. But this pipe is a saxophone!

There is something so satisfyingly matter-of-fact about these photographs, an ordinariness about the objects, but that impression is won through the hard work of attending to every detail, of paring away all distractions. Hence most of his pictures are made in Madoz’s studio.

Paradoxically, in support of the ‘ideal’, copybook nature of the objects he presents is their concreteness, but also the simplicity  of their images as if an essence has been extracted.

This ladder is a case in point. We read its ‘affordance’, but it cannot be true. Surely no ladder can lead through the looking glass? But here it can; everything tells us so; the angle of view selected so that we can see…we climb up, then down into that other, backwards world; the tapered ladder itself has been chosen to exaggerate the ascent with its faux perspective; and we see that we are not looking into a fake mirror, a hole in the wall traversed by a step-ladder because there is the evidence of the mirror’s reflection of the corner of the room. It is the magic of Mirror-world to turn an ordinary ladder into a step ladder, to allow us to step in. But note that the room itself, the one we are ‘in’ with the photographer, is explicitly everyday and somehow is separate from the ladder archetype.

Madoz’s most straightforward images are those that work best for me.

Consider what he does here with a match. With the simple addition of a temperature scale, the object that itself creates heat becomes an indicator of heat. At the same time it is transformed from an object into a sign, and we are permitted the insight into this metamorphosis.

It is this metaphysical geometry, a kind of conceptual distillation, that Madoz demands of his imagery that requires his utmost care to work. If the match is not placed just so, exactly between the two scales, it cannot become a thermometer and we would not be invited, as we are in every one of his pictures, to take part in his process of inspiration and realisation. 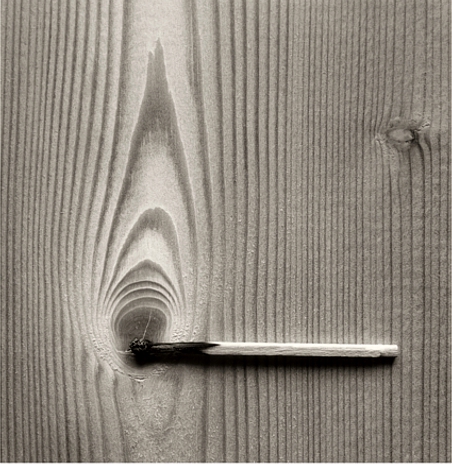 It is the spotless, smoothly graduated warm-toned silver-gelatin prints that make Chema Madoz’s images so believable,

…that present a clear window into a domain as “beautiful as the chance meeting on a dissecting-table of a sewing-machine and an umbrella”. 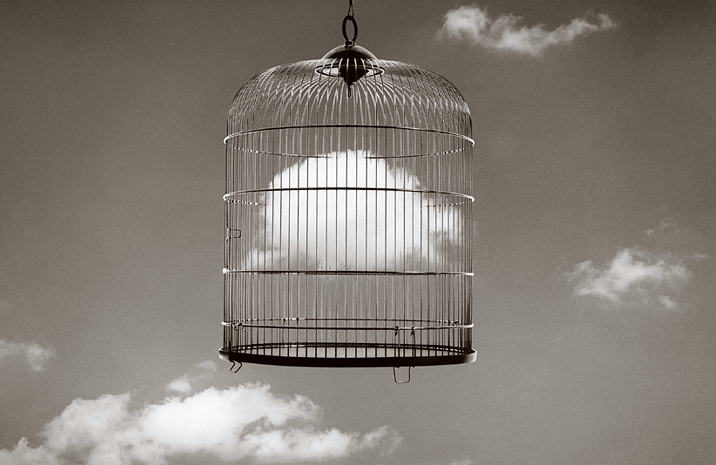 One thought on “January 1: Haptic”