December 23: They say a good photograph is a matter of timing.

Rosemary Laing (*1959) continues her show at TarraWarra Museum of Art, 311 Healesville-Yarra Glen Road, Healesville, Australia until February 11. The exhibition surveys just part of the prodigious output of this prominent Australian who has been exhibiting since the eighties. There’s too much Laing to cover in one post, so I’ll return to look at more of her work on her birthdate, August 16. But there is sufficient coincidence of her work with the application of photography by the French scientist Pierre Jules César Janssen (*1824), who died on this date in Paris in 1907, to make the comparison worthwhile.

Despite their contributions to the medium, neither of these individuals would consider themselves a ‘photographer’. “I understand the necessary image. I don’t understand photography,” says Laing. An outcome of Janssen’s astronomical research using photography was the first cinematic sequence, and Laing’s work is more cinematic than photographic.

Trained as a painter who used photography as reference material for her artwork, Laing’s real interest in the medium came when she was appointed as as an exhibition consultant in 1988, for the Australian Bicentennial Exhibition.

Her early series, greenwork (1995) and brownwork (1996-1997) are urban landscape images in which the vast expanses and freight infrastructure of an airport and its planes above the surrounding suburbs feature. In greenwork TL #3 an anonymous, figure stands dwarfed and gesticulating impotently in the foreground as a passing aeroplane barely registers as a blurry streak; Laing’s protestation of a delinquent ignorance of the mechanics of photography and disdain for composition do not prevent her from using both to strong effect.

For Laing however, the photograph is an incomplete artefact of performance and installation, “finished along the way [but which] never complete[s] the necessary idea.”  Repetition of sequences of images is a necessary part of her working process.

The bride who, like an angel, billows in the sky above the Blue Mountains in her flight research series of 1998-2000 provides an excellent example of the way Laing absorbs “the experience of the place and the situation as well as the uncontrollable factors that inherently arise within it”. To produce such work she collaborates ambitiously with actors, in this case a stunt performer, and a network of volunteer supporters and experts, to elaborate allegorical associations with the Australian history of colonisation, exploration and ultimate exploration of the indigenous land.

As Abigail Solomon-Godeau remarks, Laing’s bride in flight research was ‘suffused with the exhilaration of heightened hope and renewal’ invoked in the lead-up to the Referendum of 6 November 1999 which asked Australian voters whether they wanted the country to become a republic, following a bi-partisan appointment model which had been approved by a half-elected, half-appointed Constitutional Convention held in Canberra in February 1998.

The resulting referendum, with questions engineered to be complex and ambiguous by opponent MPs, failed. Laing’s response to ‘the dashed hopes and heightened expectations of previous years,’ proposes Solomon-Godeau in her 2012 monograph on the artist, was to “choreograph [the] ‘assassination’ of her bride.” In bulletproofglass #7 the white clouds of the prior series appear now sooty and polluted. Bullet-wounds gape hideously in the woman’s chest and neck. The wedding dress is now a shroud as her corpse plummets past the frantically flapping birds.

Laing’s timing for both series in freezing the figure in flight, who is presumably bouncing on a trampoline out of shot, is apt; in flight research the stunt performer is caught at the apogee, while in bulletproofglass #7 she is twisted into a free fall and the stiffening of her body as she prepares for the impact lends a quality of rigor mortis to the pose.

Capture of movement was a challenge for early photographers, and to document a series of quick successive moments was even more so. Well before the invention of flexible film and the cinema camera or motor drive, and working with photographic plates, Pierre Janssen was faced with the need to succeed at both, complicated by the urgency to document a rare and unrepeatable event; the transit of Venus. Though two transits follow each other within 8 years, the intervals of crossings of the planet between Sun and Earth exceed a human lifespan; every 105.5 and 120.5 years alternately.

The determination of the exact moment of contact of the planet Venus with the solar disc, measured and triangulated at different places on the Earth, related directly to the accuracy with which the mean distance of the Earth from the centre of the Sun, now referred to as ‘the astronomical unit’, could be calculated.

Telescopic observations by eye, recorded in drawings, of the transits of Venus of 1761 and 1769 failed due to the capricious ‘black drop effect’ where the disc of the planet against the bright Sun appears to stretch like a water droplet as it extrudes from a tap, thus confounding the record of the exact moment of contact.

In 1873 Janssen proposed a solution to the Commission for Venusian solar transits using photography to procure an objective and calibrated set of observations independent of human failure. His idea was to make an automatic system, which would expose a series of 48 successive pictures on an annular photographic plate, together with the exact time of the first image.

A first version of the instrument was built  in 1873 by the talented clockmaker Joseph Eugène Deschiens (1826 – 1889), but Janssen found that his clockwork mechanism was causing too much vibration. In 1874, with the transit deadline drawing closer, he hastily sought out other instrument makers in Paris, commissioning Antoine Redier (1817-1892) and son to build a new version in which the disk that drove the shutter slit rotated continuously while the disk that bore the plate turned intermittently, stopping during the exposures through the action of a Geneva drive or Maltese cross mechanism that translates a continuous rotational movement into intermittent rotary motion.

The circular photographic plate turns through 1/48th of a complete circuit, then stops for exposure. A separate disc carries 12 regularly spaced radial shutter slits with adjustable widths. It turns continuously at four times the speed of the plate. Thus, while the photographic plate has gone through a complete circle (in 72 seconds), the shutter disc will have gone through four. To sensitise the required circular plate Janssen decided on the  daguerreotype process over the collodion because at that stage the dry-plate process, invented by Dr. Richard L. Maddox (1816–1902) in 1871, was yet to be made as reliable as it was to become as when it was widely adopted after 1879. In addition, the metal plate could be dished to a circular radius to reduce aberration. Janssen was able to test this instrument to his satisfaction, and he took it in 1874 to Japan to record the transit, surviving two typhoons on the journey. 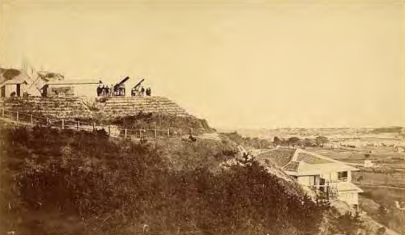 The idea of using circular sensitized plates in a repeating action camera was not entirely new. Two were invented in England, one by a Mr Thompson who sold the rights to manufacture to France where it as called a “revolver photographique”. It made only four exposures on a 7.5cm diameter glass plate, the device being held like a rifle. Thomas Skaife developed a manually operated “pistol graph” that also used a circular plate in a magazine.

The British Astronomer Royal, Sir George Biddell Airy (1801–1892) learning of  Janssen’s device, had all the British expeditions were equipped with replicas:

We are glad to be able to state that the French will employ the daguerreotype process of photography. This method has many advantages, and it is much to be regretted that no experiments have been made by other nations to test its applicability. Photographs taken by this process are well known to be much more delicate and give clearer details than any others, while photographic irradiation is reduced to a minimum. It is even possible to correct for curvature of field by employing prepared plates whose surfaces are portions of spheres, a thing that would be impossible by any other process. There can be no shrinking of the film [i.e. emulsion, not ‘film’ as we know it].

Sir G. Airy, after much anxious deliberation, and with the advice (and that not hastily formed, by any means) of Mr De La Rue, determined to adopt a dry process, if practicable. After considerable experiments at Chatham [this would have been at the Royal Engineers’ headquarters], it was determined to adopt an albumen dry process, using a highly bromised collodion, and strong alkaline development.. .. For registering the time of external and internal contact of the planet with the Sun’s disc, the method known as Janssen’s has been adopted, viz. causing a fresh portion of a plate to be exposed every second during the critical time, to the sun’s limb, at that part where the contact will take place.

Even though the results of both standard photography, and those from eight or so revolvers working in 1874, were disappointing, Janssen had nevertheless effectively  designed and created the first cinematographic camera using technology very like that used in the first movie cameras produced at the turn of the century after the advent of flexible film. A video assembled from his circular plate may be viewed here. Joseph Leclerc said that he used what he believed to be an “original” Janssen plate to make from it a movie sequence in 1950. The plate he used has subsequently been shown to be a practice plate made with a simulation of the transit.

Both Laing and Janssen share a vital interest in the moment and the sequence for quite separate purposes; Laing to assassinate brides and Janssen to shoot Venus.