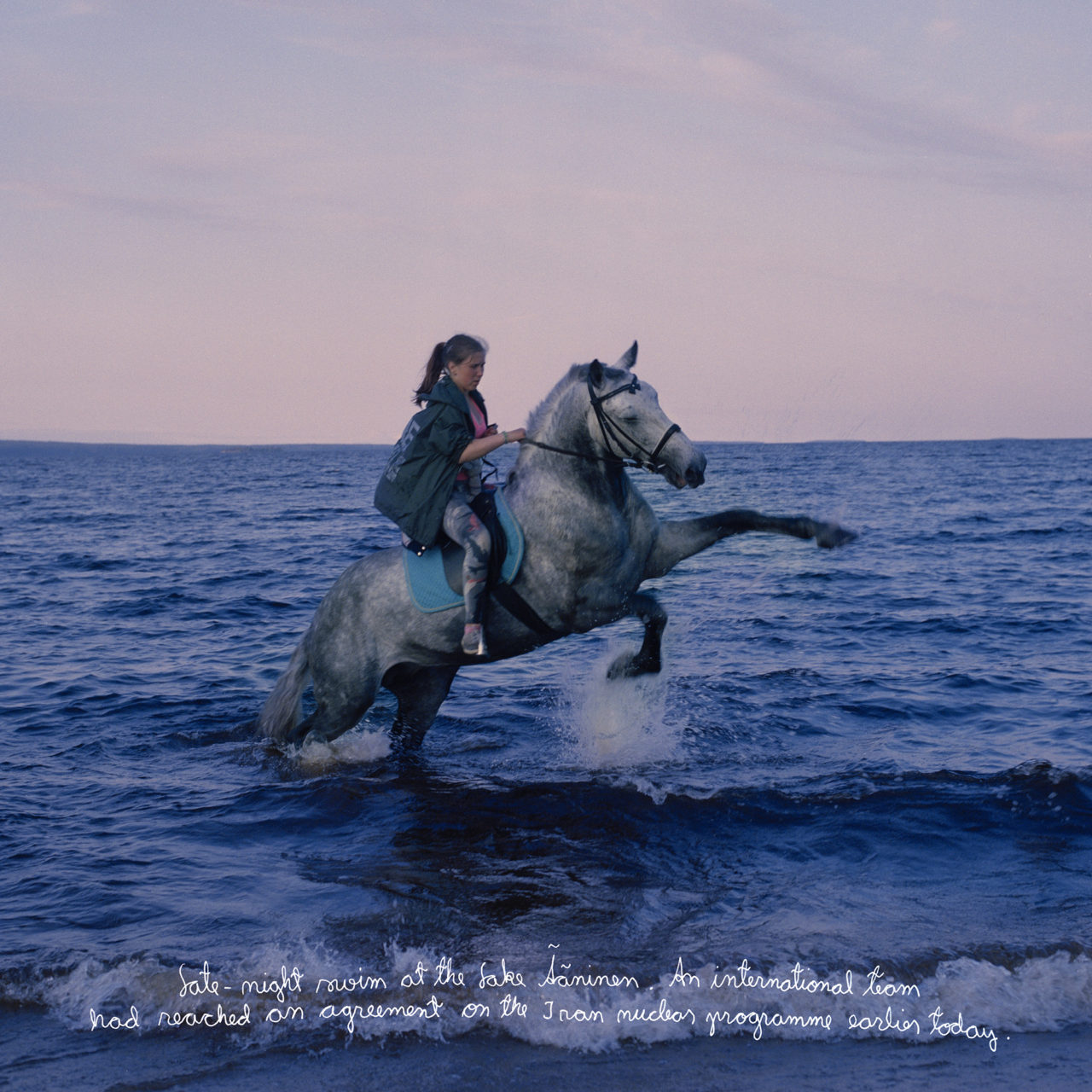 December 16: Is a photographic image, in its realism, ever Romantic?

Three photographers, Frank Eugene, Stephen Roach and Jari Silomäki, coincide somehow on this date to give us perspectives on the idea of Romanticism, the tendency toward subjectivity and away from the constraints of classical formalism and the rational.

Frank Eugene (*1865) died on this date in 1936 in Germany, but born in New York into an immigrant German family. One of the best known and technically advanced Pictorialists, he has links back to the Pre-Raphaelitism of Julia Margaret Cameron via Henry Peach Robinson (1830—1901), founder in 1891 of the Linked Ring brotherhood into which Eugene was invited in 1900. His membership of that exclusive guild associates him with a watershed in photography; Robinson’s resignation from the London Photographic Society and formation of the Linked Ring prompted by his defence of the inclusion of a soft-focus pinhole image (Davison’s Onion Field) in the LPS exhibition.

The fascination with medievalism that Eugene shared with the Pre-Raphaelites is clear in the self-portrait and portrait in armour below, and in the Cameron-esque violin player in which Eugene’s youthful experience as a carpet designer guides his taste in the tapestry in the style of William Morris against which the model leans. The flattened, frieze-like perspective and stage-level viewpoint also reference the art of the middle ages, or imitations of it.

Working as a fabric designer led Eugene to enrol in Munich’s Akademie der Bildenden Künste in 1886 to study painting and nature drawing for eight years. It was there that he began making photographs, motivated by a need for studies for his paintings.

Although Jugendstijl fully emerged in the city only in the mid 1890s just as Eugene returned to New York, the trend toward this German Art Nouveau movement, named after the Munich periodical Die Jugend (‘Youth’), would have been the rage amongst his fellow students. A decorative art with the mid-century idea of the gesamtkunstwerk; the ‘total work of art’ applied in Wagner’s opera and in Dülfer’s architecture, Jugendstil before 1900 favoured floral motifs and ukiyo-e prints of Japanese art. Eugene embraces these ideas with enthusiasm.

On return to New York in 1894, Eugene employed himself in painting portraits of actors and joined the Camera Club of New York around 1899. There he showed seventy-five nudes and portraits, all heavily reworked with hatching into the negative emulsions and soft printing on textured tissue platinum paper. He habitually erases background detail in order to force forward the subject and its silhouette.

His rise was rapid; hailed in December 1899 as a “painter-photographer” by German/Japanese critic Carl Sadakichi Hartmann (1867–1944), in 1900 F. Holland Day (1864–1933) included his work in the London and Paris exhibition, the New School of American Photography, and Alfred Stieglitz (1864–1946) featured photogravures by him in his periodical Camera Notes and a 1901 portfolio, American Pictorial Photography II. In 1902, as a founding fellow of Stieglitz’s exclusive Photo-Secession, he was included in its inaugural show at New York’s National Arts Club, then in 1904 at the Carnegie Institute (Pittsburgh) and the Corcoran Gallery of Art (Washington, D.C.), and in 1910 at the Albright Art Gallery (Buffalo).

Even Eugene’s more commercial commissions, like this student group, reminiscent of Slumbering Maidens, are redolent of elegant fin-de-siecle lassitude in their mannered arrangement; here a luxurious sylvan precession of the swaying form.

In a reaction to the realism of the industrial age, he most typically among the Pictorialists awakens us to a half-remembered idyll, an indefinite yearning that is an essential attribute of romanticism, but bloodless compared to the passion of the first Romantics (Goya, Gericault, Delacroix, Friedrich) one hundred years before, or the dark melancholy of the contemporary Symbolists who included photographers Puyo and Demachy.

Such pensive depths can be plumbed in the environmental tableaux of Australian photographer Stephen Roach (*1951) which fit the words of the philosopher of Early German Romanticism, Novalis, pseudonym of poet, author and mystic Georg Philipp Friedrich Freiherr von Hardenberg (1772 – 1801):

The world must be romanticized. In this way its original meaning will be rediscovered. To romanticize is nothing but a qualitative heightening. In this process the lower self becomes identified with a better self. (…) Insofar as I present the commonplace with significance, the ordinary with mystery, the familiar with the seemliness of the unfamiliar and the finite with the semblance of the infinite, I romanticize it.

These are words quoted by Viennese Max Hollein (*1969), of the Fine Arts Museums of San Francisco, in his 2015 catalogue for Ideal Worlds: New Romanticism in Contemporary Art, announcing a novel sense of the Romantic. Roach has been included in group exhibitions with Elena Dorfman (*1965) whose solo shows Sublime, Empire Falling, The Origin of the New World, The Pleasure Park reflect his own sensibility, and with Lydia Venieri (*1964), animator Karen Yasinsky, the conceptual expressionist Jürgen Klauke (*1943), and fellow Australians Melita Dahl (*1966) and Mary Lou Pavlovic (*1965) who share his New Romanticism in diverse ways.

His series develop slowly and intuitively, sometimes over a period of years and are presented undated; images are sometimes repeated between them, reappearing as a coda, or to create novel resonances.

Since his themes and subjects are drawn from everyday life and involve friends and family, they are strongly felt with a psychological edge that taps into the symbols associated with the usually natural environment in which the photographs are made. 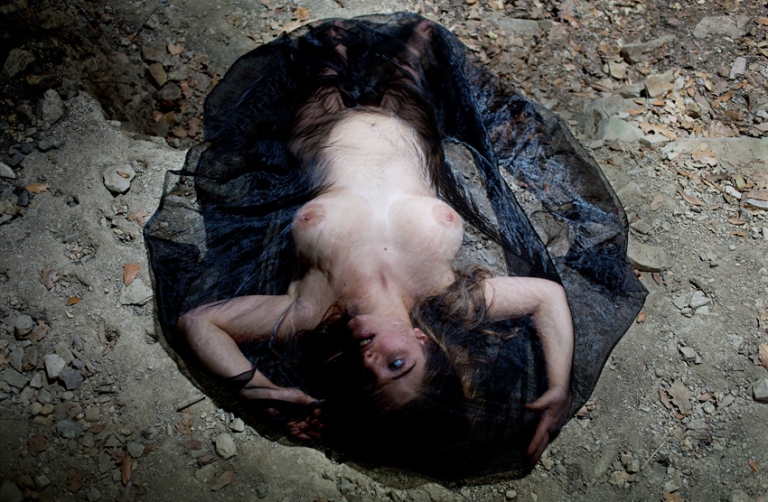 Like H. P. Robinson’s, Roach’s works are often composites. He combines film frames into diptychs and triptychs either with an abrupt contrast, or by using the similarity of tones at their edges to conceal the seams, or more recently by simply blending them together digitally.

Thus a narrative is suggested by the juxtaposition and transition from one shot to another. The ‘wide screen’ further hints at a cinematic scenario, and enhances the viewer’s experience of a mise-en-scène.

Roach, who grew up in Sydney began to exhibit his photography in 1978, leaving the next year to live in Japan, then The Netherlands, and settling in 1982 in Milan. His adventures sound Romantic; after marrying linguist Fabrizia Baldeserra, he renovated a sixteenth-century stone farmhouse with a tower in the Chianti region in 1987.

His mysticism is evident in the  couple’s joint presentation, with Stephen’s imagery, of “Mandalas, Chakras and the Resiliency of the Circular Icon in Contemporary Indian Imagery” at the 2016 conference Transcultural Encounters: Transversality in Hinduism of the India-Europe Foundation for New Dialogues. Roach last exhibited solo in Australia at Conny Dietzschold Gallery Project Room Backstage 1 – 22 February 2014.

If his ‘New Romantic’ imagery appears somewhat ominous and portentous now (though much less than that of say, Gregory Crewdson), is it because we are inured to ‘false news’ and wary of hyped emotion?

The neon sign “I COULD BE YOURS”, above, introduces a rare textual element which makies a more explicit statement. Text is the foundation for a take on the romantic, contemporary to Roach’s Transitive Narratives, by Finnish photographer Jari Silomäki (*1975).

It is a delight to discover this diverse and inventive artist. His Rehearsals for Adulthood (1997-2001) at The Finnish Museum of Photography, Kaapelitehdas, Tallberginkatu 1 G, 00180 Helsinki, made in 2007 with original silver gelatin prints from the mid-seventies combined with some more contemporary, is not his most recent series and the exhibition closes tomorrow. Nevertheless it is distinctly about romance but is emphatically unromantic.

Using an actor Silomäki restages and dissects a ‘young man’s fancy’, his own, comically documenting, with diagrammatic and written annotation, the many fickle and fleeting infatuations-at-a-distance on his European travels. The subject of his affections is circled in each photograph, and the place, time and date noted (in English and Finnish as appropriate for showings in international showings). 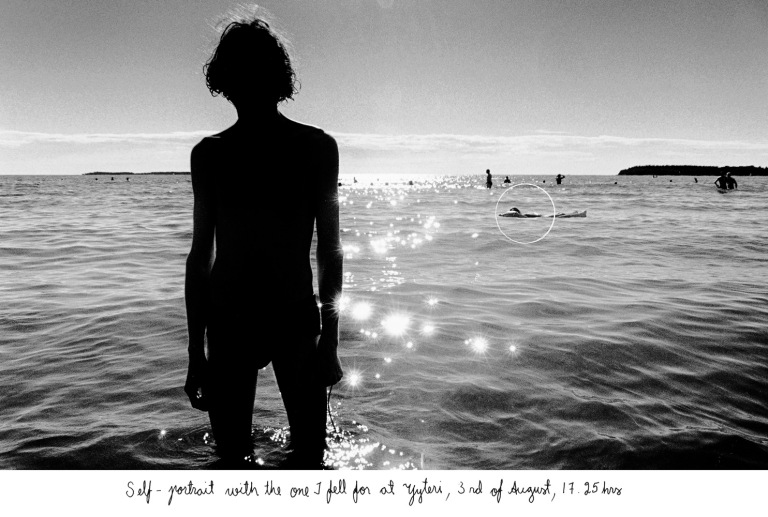 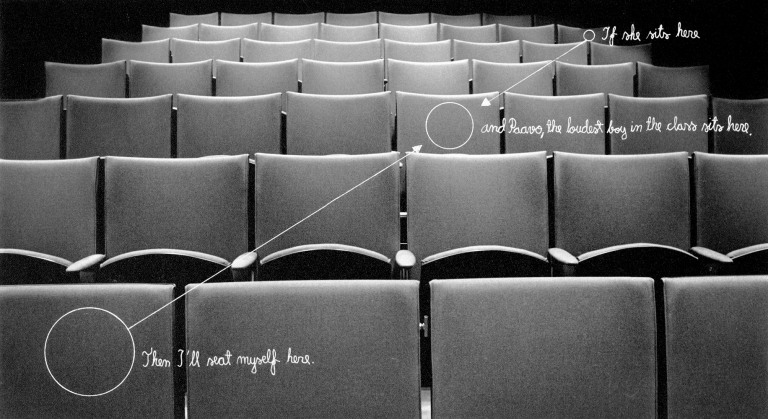 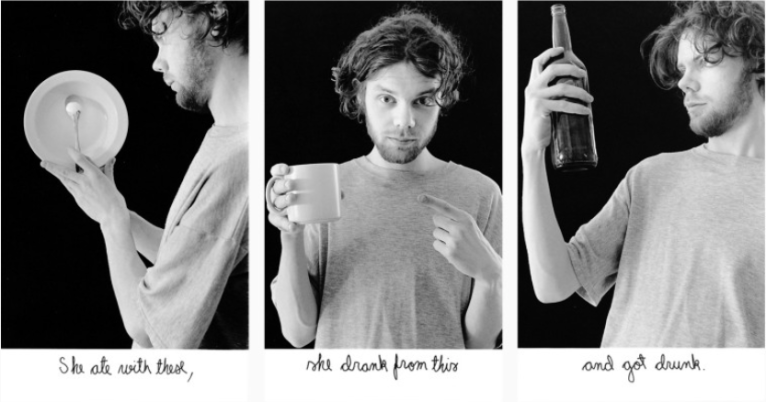 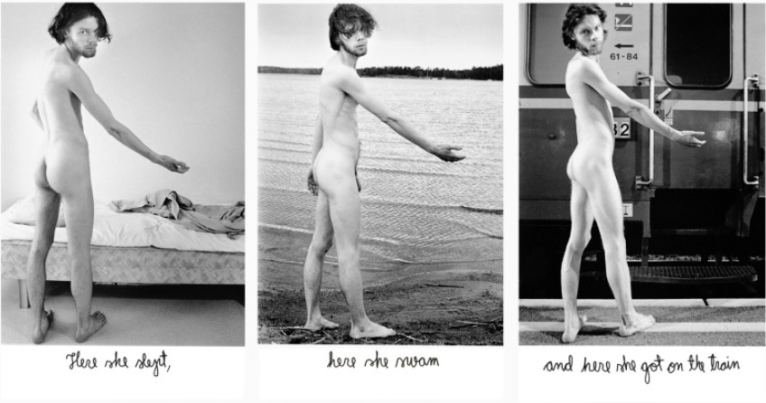 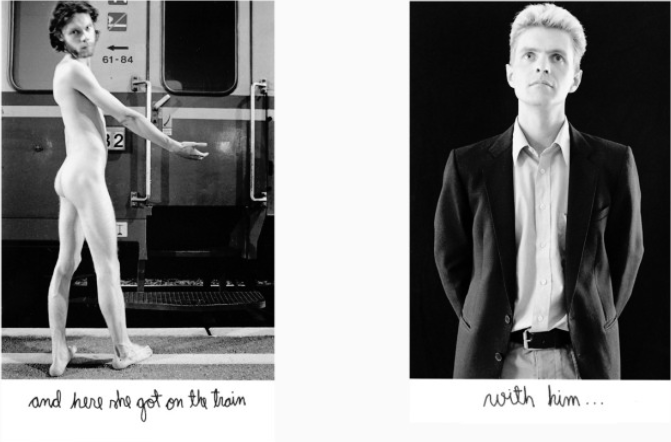 Silomäki’s work draws on the autobiographic for its power. He describes the rationale for his My Weather Diary 2001 – 2051;

Since 2001 I have taken a landscape photograph every day. I connect these photographs to important personal or world political events. These images connect personal human relationships and terror strikes, raising children and genocides, the smell of coffee and global economy. At present, these ‘Weather diaries’ comprise thousands of photographs and is a continuous process; all exhibitions on this theme have been different. The starting point of this work was that world events, personal events and weather will repeat themselves and merge into one large continuum. On the other hand, tying landscape and news concretizes how we are in contact with world events through the media. Everything is brought up close, which also means that events that are truly nearby are no longer close.

It builds on the fact that we can visually recall the place we were when we learned or thought of a major world event, thus the ongoing series binds the personal to the global, and the result shares its affect and interweaves history and memory. The daily commitment and sense of purpose has honed his technique well beyond that of the run-of-the-mill contributor to Instagram. 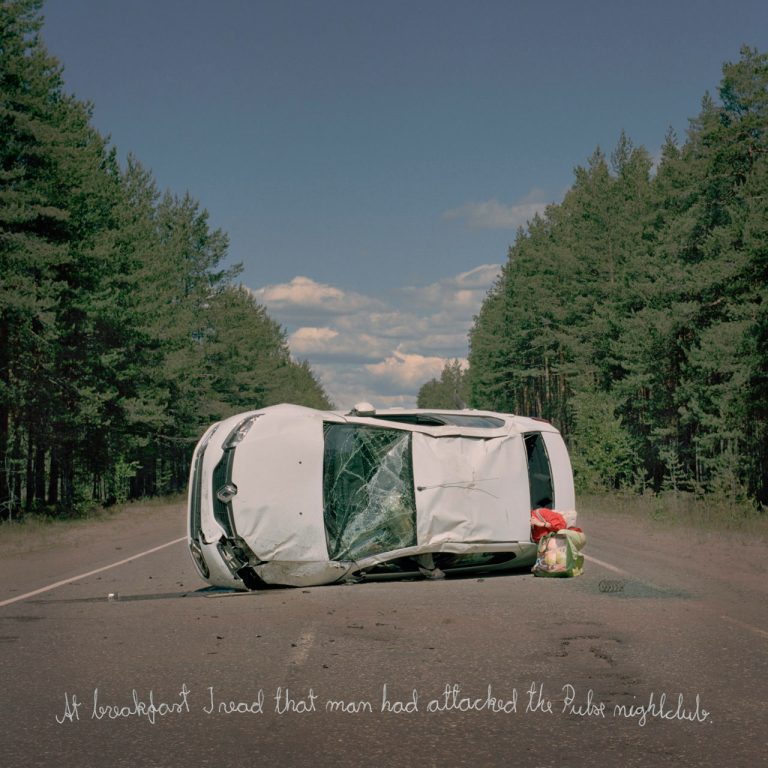 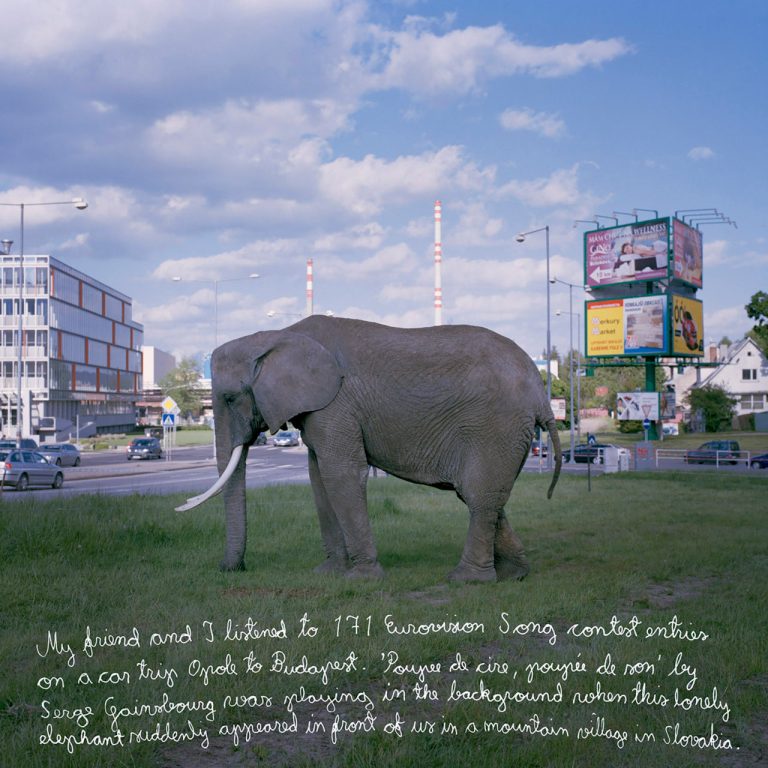 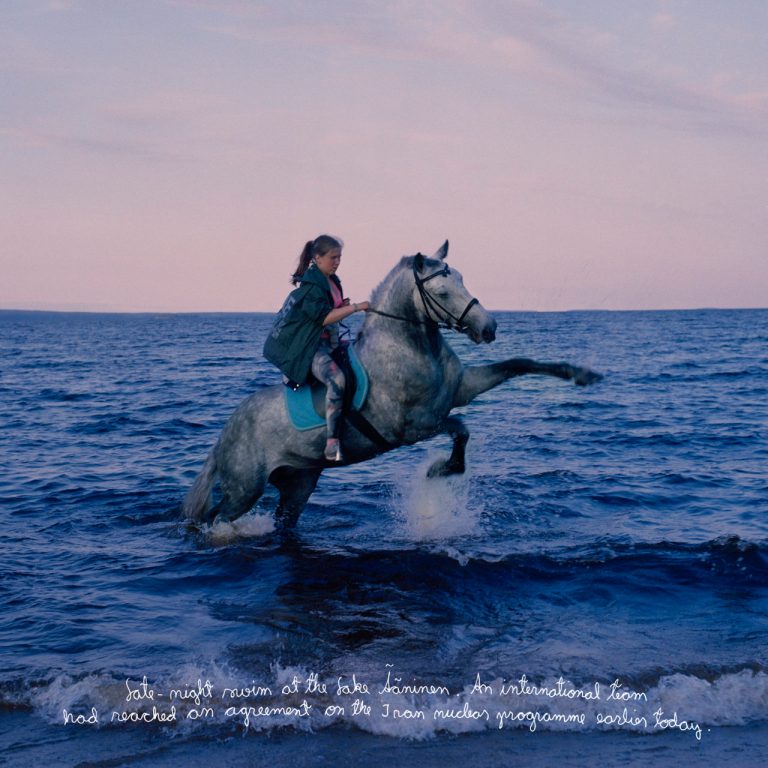 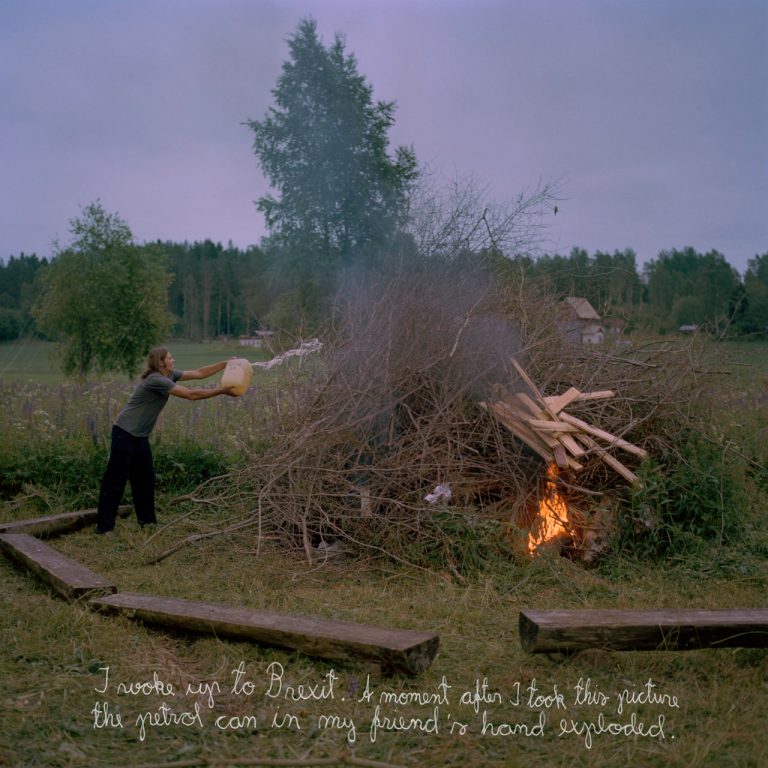 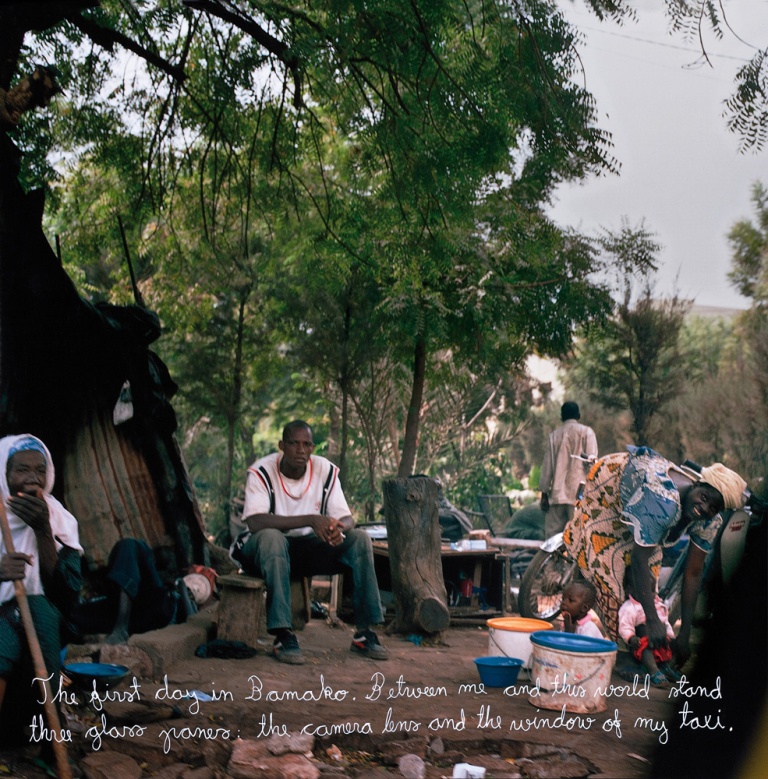 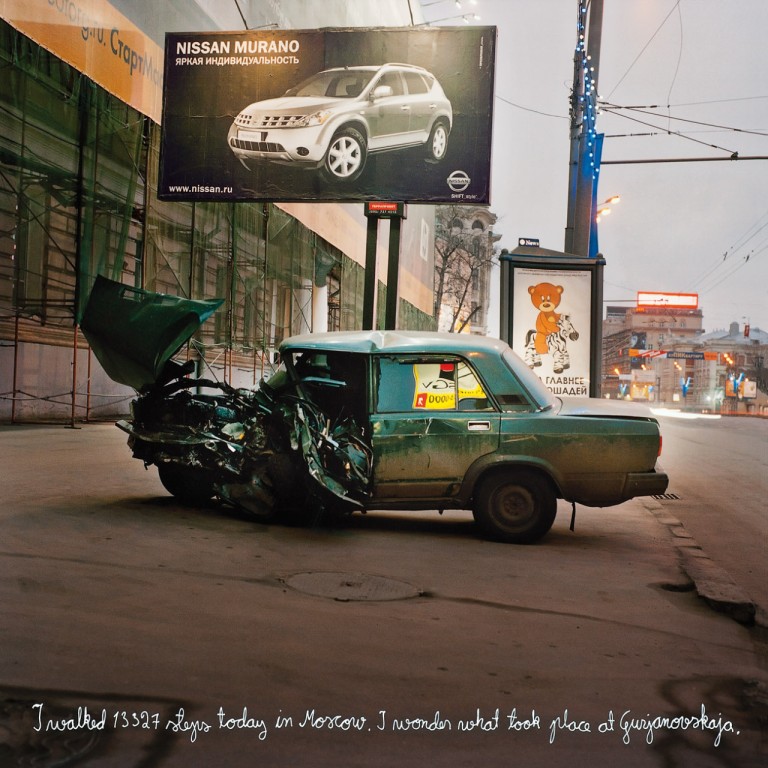 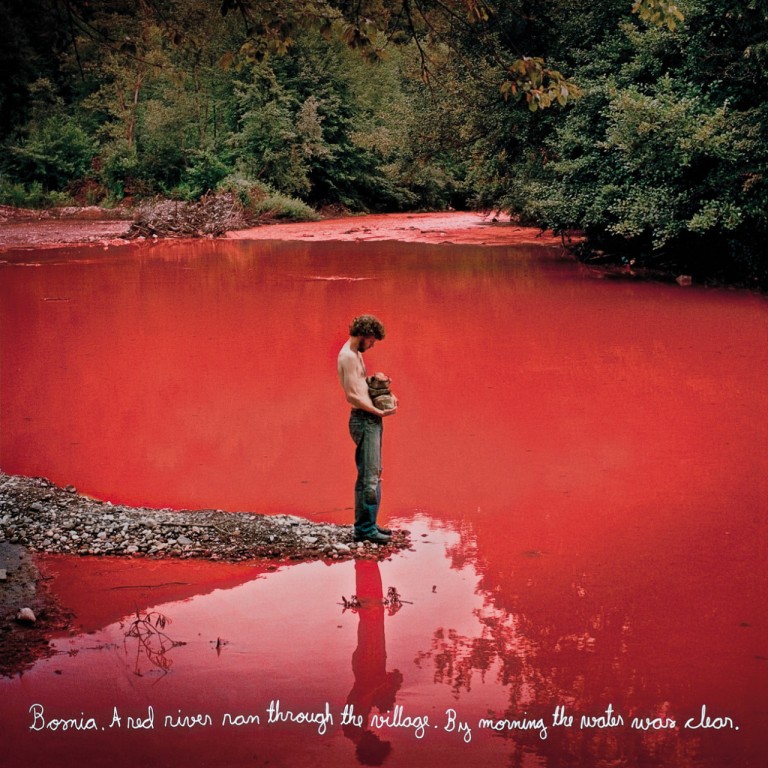 If romanticism is an exposition of the sublime within the quotidian then Silomäki would be a Romantic who, endowing the momentary with the momentous, extends his finite existence into an apparent infinitude. 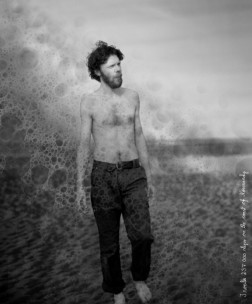 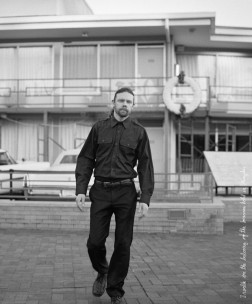 I walk on the balcony of the Loreanne hotel in Memphis. 58cm x 70cm 2013 pigment ink print on aluminium, framed 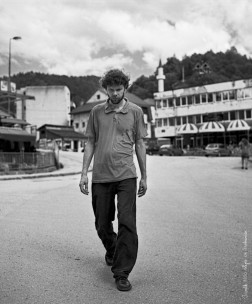 However his commentary is ironic, and emphasises its own futility. His series “We Are The Revolution”, after Joseph Beuys 2006–2013–2020 turns the tables; starting in 2006, he visited sites of political tragedies and there paced out a step for each of the victims while walking toward his tripod-mounted camera;

I started the walking process from the previous century, from the murder scene of the Austro-Hungarian Archduke Franz Ferninad and his wife Sophie Chotek in Sarajevo, and stopped at Ground Zero in New York. Tens of millions of steps fit between these two events.
I follow Beuys’ […] idea, that each individual in a revolution is just one part of a larger whole […] I ponder the question, of how individuals relate to large entities: war, statistics, and centuries of history. In We Are the Revolution, after Joseph Beuys, I describe the individual as a part of the inevitable forces of history.

He underlines that the everyday is forever becoming the Romantic sublime, something never realised, even in retrospect.