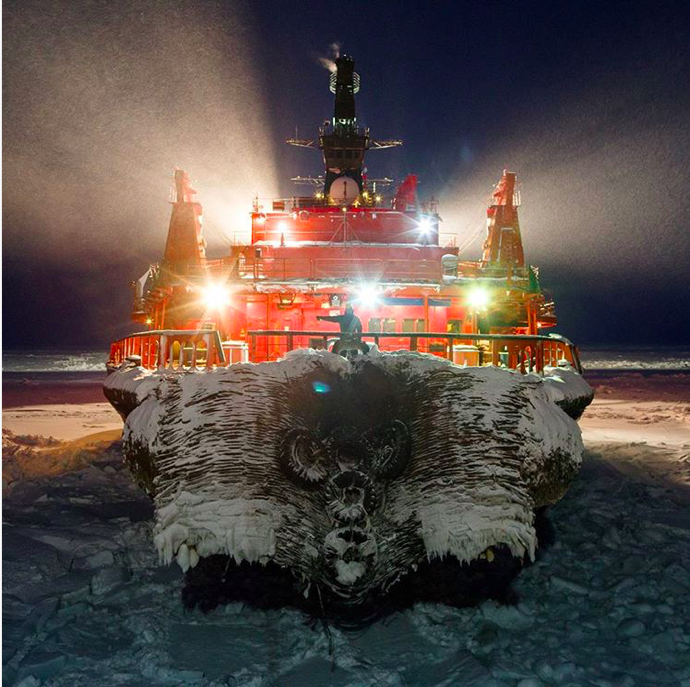 …rediscovery of Saul Leiterʼs work in recent years is clearly a major event in the history of photography. From being a fashion photographer known only to specialists, he has become a pioneer of ‘street photography’ in colour.

Also today, opening at Galerie FMR, 23 rue de Penthièvre, 75008 Paris, is an exhibition There is gas under the tundra by French photographer Charles Xelot (*1985). Both he and Meeussen document the petroleum industry, but in very different contexts, and to examine their work is to discover a growing subjectivity amongst imagery of that problematic but burgeoning business.

A commercial industrial photographer, Victor Meeussen’s main client after the war was Esso Netherlands NV and other major companies for whom he made heroic promotional photos of refineries, factories, oil rigs, shipyards, airports and ports. Meeussen had learned the process of printing full-colour dye-transfer photographs in the years 1935-’36 on a one-shot 9×12 cm colour camera with three permanently installed filters. His pictures of his home town of Bremen adorned with flags for the July 1936 ‘Nazi’ Olympic Games appeared in colour in a newspaper supplement.

From June 1937 until January 1939 he was assistant for the company Wolff & Tritschler, learning colour in smaller formats, and also composition and design, both valuable contributions to his training. Dr. Paul Wolff (1887 – 1951) a Leica enthusiast who published Meine Erfahrungen mit der Leica farbig (My Experiences with the Leica in Colour) in 1940, was a demanding teacher who expected very precise work of his assistant. As lighting assistant, Meeussen had hands-on experience in the German Opel factories working with the 30,000 watts of photo lamps required to expose low-sensitivity colour materials in the difficult conditions.

A colour image should not be a coloured black and white photo. In black and white without doubt form and light are the main elements, while colours not only represent a colour value, but also an emotional connotation. For example the warm colour red represents  happiness, joy, exuberance, cold blue colour contrast, silence, distance, loneliness.

Only when one succeeds in welding the elements of colour and form consciously together, so they, as it were,”meld”, then one is colour photographer.

However during the war Meeussen’s life unfortunately took a wrong turn which has probably resulted in his neglect. Because of his Dutch nationality Meeussen no longer had a work permit for Germany, so returned in February to the Netherlands to live in The Hague with his aunt, the sculptor Lex Meeussen, and found a little work darkroom printing and photographing theatre through a photo agency.

During the Occupation, under considerable pressure he joined the Customs and Working Community (the cultural department of the SS) who recruited him because of his education and training as a German, despite his Dutch nationality, and demanded that he support his ‘homeland’. Given a three-day training in Wageningen (in central Netherlands) and deployed as a photographer/reporter he traveled for them to Norway focusing among other things on Nazi genealogy and propaganda.

His political naivety (and likely his sense of self-preservation) resulted in consequences that forced his documentation of an anti-Communist, anti-semitic exhibit held in Den Haag, arranged by the Deutsche Akademie. His photographs stamped “Foto Victor Meeussen, Den Haag, Holland” and “Verbond van Nederlandsche journalisten, V.C.P. Meeussen”, seized by U.S. military intelligence in 1945 or ’46, show a 1940-1943 exhibition of Dutch language materials in a library setting promoting anti-communist and anti-Jewish propaganda with books and magazines laid out on tables and posters and wall-charts. 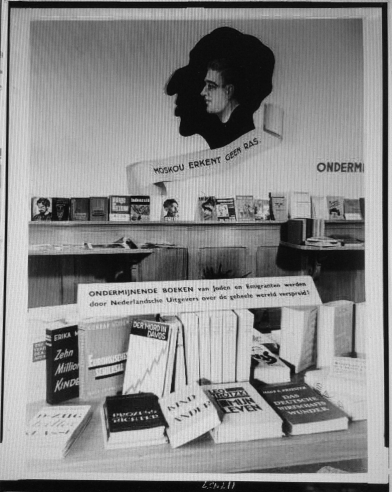 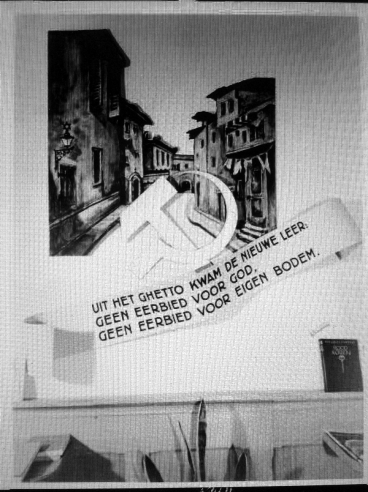 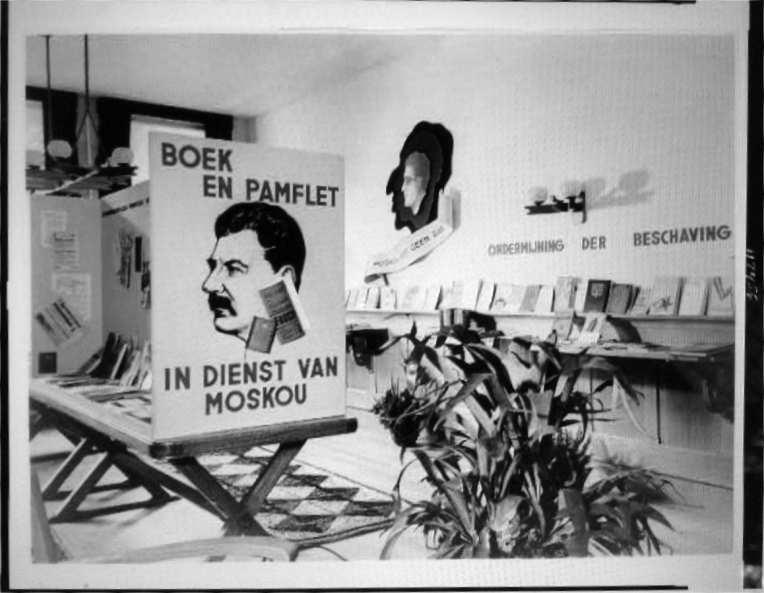 Deployed as a photographer reporter at the Battle of Arnhem, one of his German officers mercifully perceived that Meeussen was misplaced, so sent him shortly afterwards on a ‘mission’ to Bremen, back home, where he absconded to live with relatives until the end of the war, when he returned to the Netherlands. There he was arrested and placed in a camp, but released on evidence of his integrity and good conduct and taken under the wing by photographer Meinard Woldringh (1915–1968), through whose contact, Esso employee Jan den Boestert (1910–1992), he was hired as a freelance industrial photographer for Esso Netherlands in The Hague. 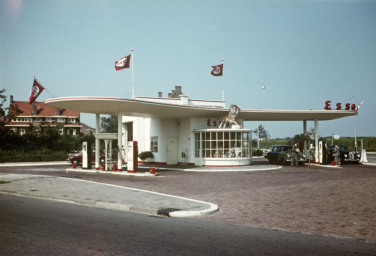 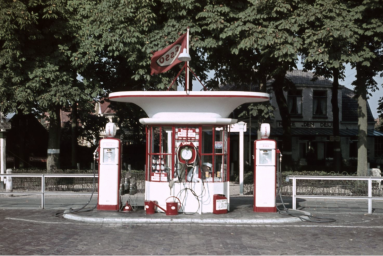 A point of comparison is worth making at this point with Charles Xelot‘s petroleum industry imagery. An heroic impact as in Meeussen’s work is evident here…

…but the intention in Xelot’s is quite different. Now petroleum companies are eager to convey a ‘green’ image to counter the growing negativity about their impact on the enviroment, devising logos that are literally green, representative of leaves and yellow sun, their promotional imagery steers clear of pictures of refineries and ‘cat-crackers’ belching fumes and smoke.

Xelot’s There is gas under the tundra won 1st Place, Professional Environmental Editorial, in the 2017 International Photography Awards (IPA), a comprehensive annual global competition for photographers funded by the non-profit Lucie Foundation.

His perspective on this industry is much less positive as he documents one of the largest gas field in the world under construction on the Yamal peninsula in northern Siberia at the edge of Kara sea. This factory will extract gas from under the permafrost to be exported worldwide and all year round by pipeline and by sea, facilitated by the thawing of Arctic  ice. However the Yamal peninsula is home to the Nenets, one of the last world populations surviving on traditional large-scale nomadic reindeer husbandry. The region has seen recent evidence of permafrost melting.

Adapting to the scale of the region and the gargantuan industrial installations Xelot encompasses an expansive view for most of his shots with his 51.4Mp Pentax 645Z, exploiting the white canvas of expanses of snow in which to set a Breughelesque frieze of figures and objects in conjunction, and in conflict. Xelot thus conveys in his imagery the transformation of the region that are a litmus of a global situation due to social and environmental upheavals caused by the energy needs of mankind, accelerated in this harsh environment which sits atop Russia largest reserves of natural gas. 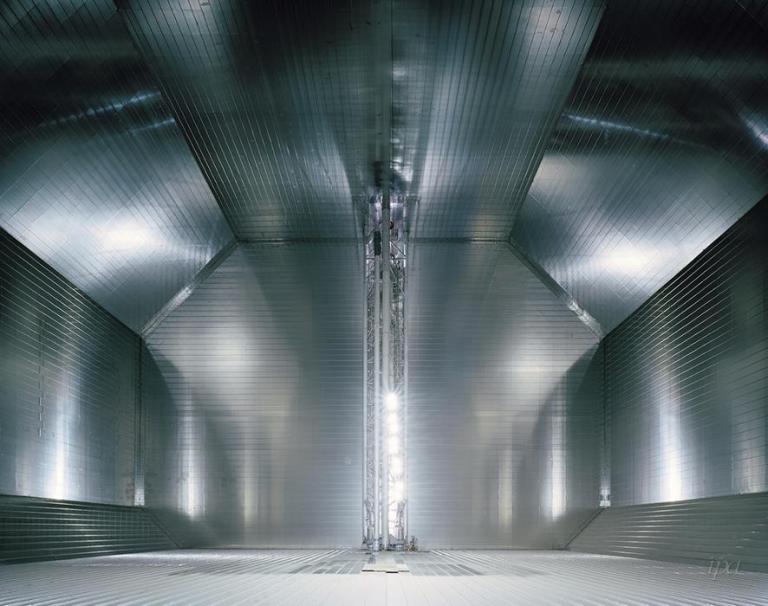 Xelot has photographed in Russia for a number of publications, among them ‘The Holy Abodes of the Russian Soul’ for Cherche midi (Sep 20, 2014); a coffee table book about Russian monasteries; Ust Luga photographical survey, a photo book on the construction of the biggest oil terminal of Europe in the south of St Petersburg Russia; “Living dress”, Dress code magazine (2012);  and ‘Russian Monasteries’, Le Figaro Magazine, (2014), as well as producing reportage on Katmandu and Gadhimai. His most recent book is Résurrection 1917-2017.

Meeussen and Xelot, while working professionally, both photograph for its own sake, Xelot producing a series on sleepers (All Night Long) and Meeussen, in the period 1950-1960, just like, and contemporaneously with, Saul Leiter (1923–2013), photographed in colour in his spare time.

He and Leiter both practiced street photography though Meeussen concentrated on somewhat more sentimental subjects than Leiter; small events in which emotions were visible: happy children, a couple in love, and a thread in this colour work is imagery of caring fathers or mothers with small children in their arms or children in strollers. 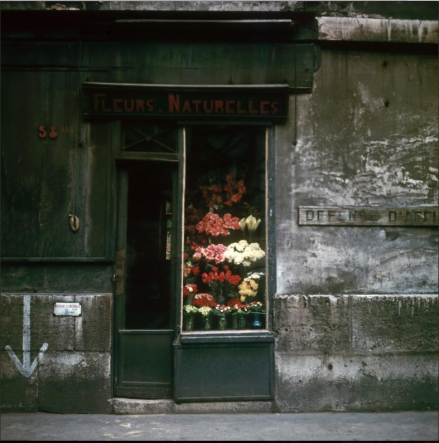 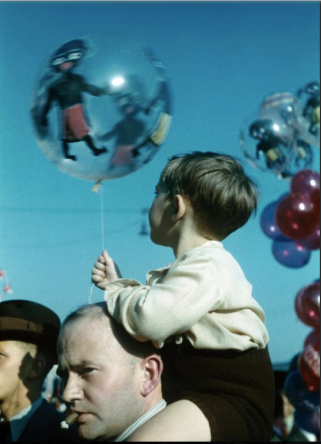 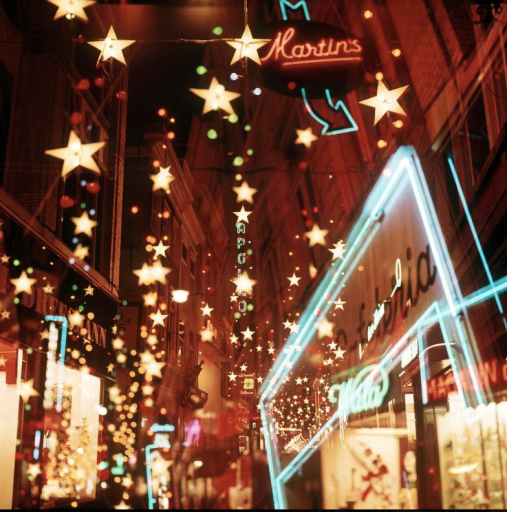 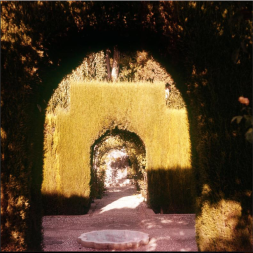 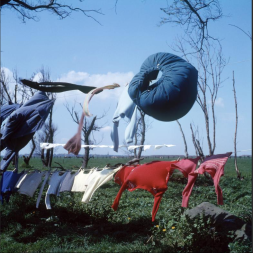 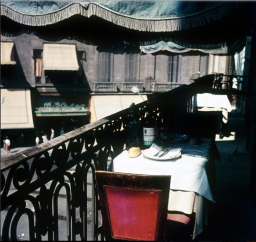 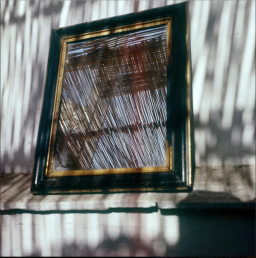 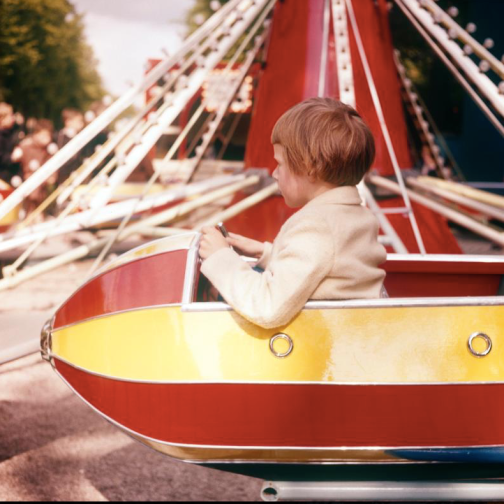 He photographed Edward Steichen on his visit to the Netherlands in search of European photographers for MoMA’s The Family of Man exhibition, but was not included in that show.

He was described by his former colleague Professor Rein Meijer (1926-1993), who later taught at Melbourne University, Australia, as erudite, well-read of German literary works, knowledgeable in the history of art, and modest. Wouter de Keizer, author of Journalistieke fotografie (1947) writes in a 1952 Foto magazine,

There was something of effacement in his attitude, sensitive and melancholy, but also a lover of fine humor and puns.

These are characteristics reflected in this, his sole existing self-portrait.

Meeussen worked with small cameras including the 35mm Leica, medium format Rolleiflex and Rolleicord (above) and a Petri half-frame camera. He also had a Brand 17 view camera, but according to Rein Meijer, he never used it. 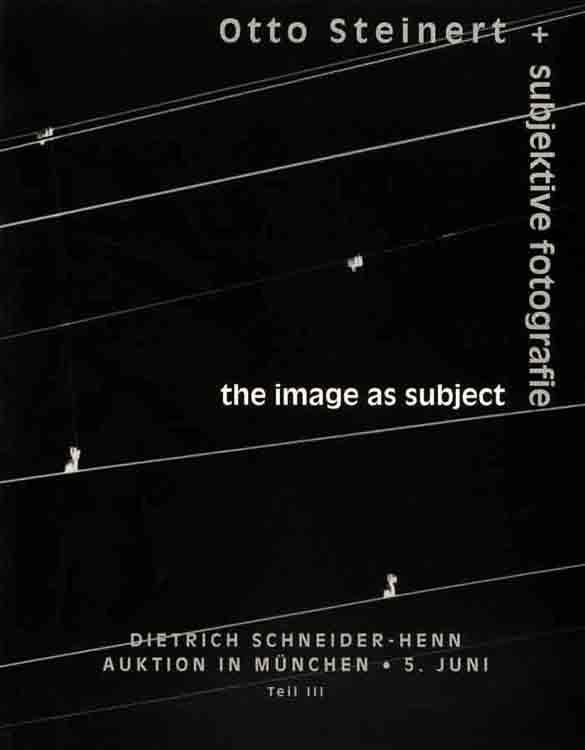 the term ‘subjective photography’ emphasised the personal contribution of the photographer to the form and content of the photo. The focus was mainly on experimentation and new solutions which were shaping a new vision. Subjective Photography was a framework within which all sorts of photography were conceivable.

The exhibitions were successful, especially given their international inclusiveness and the common belief that they represented something new after a period of isolation during the rise of National Socialism. Subjective Photography stood in complete contrast to the German movement of The New Objectivity (Der Neue Sachlichkeit), the term coined by Gustav Friedrich Hartlaub, the director of the Kunsthalle in Mannheim, for a 1925 art exhibition which became a rallying-point for Weimar intellectuals rejecting the self-involvement and romantic idealism of the German Expressionists.

Meeussen association with Subjective Photography continued with inclusion in Images Inventées (Verzonnen beelden, or Invented Images), 30 March to 17 April 1957, assembled by Belgian Julien Coulommier (1922–2014) and the painter/photographer Serge Vandercam (1924–2005) at the Galerie Aujourd’hui in the Palais des Beaux-Arts in Brussels. This international photography exhibition was the result of a collaboration between the Galerie Aujourd’hui (whose director-general was Pierre Janlet) and Otto Steinert’s Staatliche Schule für Kunst und Handwerk at Saarbrücken.

Meeussen was from about 1951 core member of the Dutch Photographers Circuit (NFK), and of his activities there Bernard van Gils said:

…of course you get at such meetings people who have a tremendously good analytical skills, such as Victor Meeussen.

For more than eleven years Meeussen taught photography at the Vrije Academie (Free Academy) in The Hague founded by Livinus van de Bundt (1909–1979), who himself was a self-styled ‘light painter’. Students, who were free to follow those lessons that they found interesting remember Meeussen as someone who had the gift of being able to talk with great enthusiasm about his subject and to stimulate his students.

Wouter de Keizer, in 1952, typified Meeussen’s personal work as of ‘a spiritual genre that is quite lacking in Dutch photography’, but did Meeussen’s subjectivism, evident in the witty framing of this zoo shot, translate into his industrial photography? His adopted  ‘New Subjectivism’ certainly affects an heroics that is perhaps evident in his commercial work. However it did not occur to him to exercise this ethos in a more penetrating and more critical representation of industry, of the kind of catalytic combination of art and reportage of the kind we see in the work of the nearly eighty-years-younger Charles Xelot who lives in an era in which petroleum production is increasingly regarded as a threat to the environment.

Clearly this exciting synthesis is a development of a new generation of photographers.

One thought on “November 7: Catalytic”