October 25: Jeff Carter, who died on this day in 2010, is undoubtedly the champion photographer of the now mythical outback Australian, the self-sufficient, no-nonsense, tough, reliable…the ‘battlers’. His subjects were unknowns living a quite different life to those of their city cousins.

This prolific Australian writer, photographer and photojournalist whose business card for most of his career read “photographer to the poor and unknown”, started to take photographs at the age of seventeen. A ceaseless adventurer, he left school and home to set out, with typewriter and folding Kodak, across the continent, documenting the everyday lives of working people, creating an archive of over 50,000 images, a selection of which can be found online at the National Library of Australia. 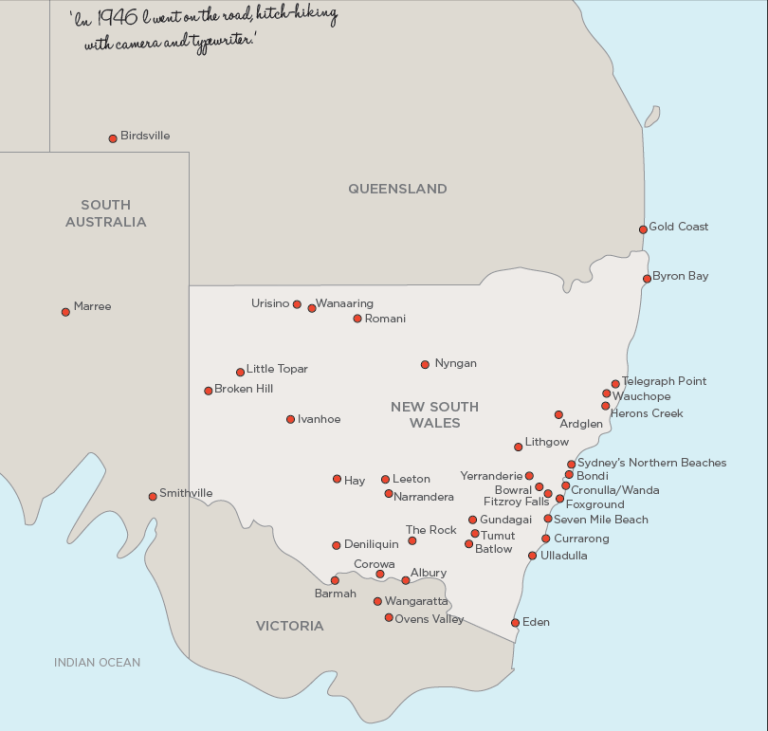 He covered the loggers, charcoal burners, fruit pickers, farmers and pastoralists as he hitchhiked and traveled around Australia. He wrote and illustrated twenty books and produced the popular TV series Wild Country.

My father bought many of Jeff’s photographs for Walkabout, while he was editor in the 60s, and one day we visited Foxground in New South Wales, south of Wollongong, where he’d settled in 1962. There we found a man just like the people he photographed. Bull-knecked and strong as an ox, he lived in an isolated valley on the remains of a 45-hectare farm carved out of dense bush, which he and his American wife Mare were reverting to the original forest and were in the process of creating Glenrock Farm Wildlife Refuge which he had gazetted into a Wildlife Refuge in 1962, inviting city children there on tours. Mare and Jeff were committed conservationists at a time when few had heard of the word and ‘the environment’ did not exist. I guess this was their ‘retirement plan’, but he never stopped taking photos nor did Mare stop writing.

I was just a boy, so my memory of our visit was my encounter with Goth and Vandal, their sons. True to their names, they were scarily wild, and soon were showing me around the property, up the steep mountain stream where above a waterfall was their source of water; a galvanised pipe resting in a deep waterhole brimming over into the waterfall, which was also their swimming pool, for which, they made clear, there was no need for bathers or towel. The water was freezing. They demonstrated their prowess with a .22 rifle, scaring the daylights out of me. Then took me to meet a little joey that Mare had rescued from its dead mother, hanging in a flour sack on the kitchen doorknob. If this was Eden, they were Cain and Abel, but they stopped at murdering each other, or their guests!

[Goth went on to become a photographer, having learnt to process and print by the age of fifteen, and around 2005 was teaching others in Japan at his own school and photo studio Goth Carter Group in Nakazakicho near Umeda Osaka.] 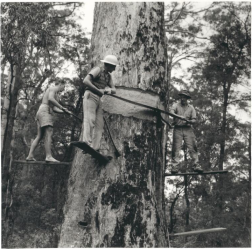 When I look back through Jeff’s photographs of the 1950s and 60s, they take me back to the writing in old issues of Walkabout, in which every picture came with a story by the likes of the great Ernestine Hill, who wrote there in 1940:

All things of the idyllic seeming in this life are the most difficult – a windjammer, a genius, a beautiful woman, gold. Prose and poetry have glorified the drover’s existence into a ‘vision splendid of the sunlit plains extended’. Romance glows in the camp-fire light, and rings in the rhythm of the riding.

It is doubtful whether there is a more arduous calling on earth, Truly it has poetry, but the men are too weary to find it. In the long hard days, they pay the price of  the poet’s inspiration. To them the everlasting stars are merely sleepless nights. From the time the head drover takes delivery to the time he trucks at the railhead–six months if he has luck–he knows not a moment’s peace
[…]
While the stars are still shining, the camp stirs, the horse-tailer out for the horses, a rattle of pans from the cook. The dog-watch rides in. Already the cattle are rising, and browsing here and there. Men bare to the waist drag themselves from all too brief slumber–those pyjamas were only a sop to sentiment after all, for nobody wears them on the trail. If there is a tier or waterhole handy, the  men plunge in. If not, they tip the water-cans into the dish. On a dry stage, a pannikin serves as a bath.
Standing round in the firelight when the dawn is grey, they eat a silent ‘thumb-piece’ of bread and beef, and wrap up another for the saddle-pouch, then quaff a quart pot of milk-less tea, and swing into the stirrups. Early morning sunlight, slanting between the paperbarks, sees the cavalcade away. It will not pause till sundown.

Jeff’s photographs take in this harsh reality – he regarded himself as a documentarian and was reluctant to call himself an artist – but he returns the poetry to the lives of the people in it, arousing our curiosity about them. His ambition was to be ‘the Cartier-Bresson of Australian photography’; but to watch as my mother, Walkabout‘s de facto designer, laid his pictures out amongst the galley-proofs on our dining room table was to be glad that he invested his pictures with more passionate fellow-feeling than the shy, elusive Frenchman. He lived with his subjects.