October 23: “A need for speed” is built into the development of the photographic medium in the first half of the twentieth century, in parallel with the advent of ever faster cars, planes and communication.

Will Ruge, born in Berlin on this date in1892 (†1961), was a German photographer who plunged into the Modernist ethos, photographing wars and sport, racing in cars and planes, and most famously; recording selfies during a parachute jump in 1931. This is something we have come to take for granted in the age of the GoPro, but at the time the German’s feat found its way into international magazines.

Coincidentally C/O Berlin Foundation is currently showing Willi Ruge: Fotoaktuell, curated by Ute Eskildsen & Felix Hoffmann until December 3, at Amerika Haus, Hardenbergstrasse 22-24, 10623 Berlin. The show of 140 vintage photographs, some never before exhibited, is based on research by curator and photo historian Ute Eskildsen and is the first Ruge retrospective worldwide. Images had to be laboriously tracked down as Ruge’s entire image archive was destroyed during an air raid on Berlin in 1943 (most are held now by ullstein bild and licensed to Getty Images). A catalogue has been published by Steidl on the occasion of the exhibition.

He had served in the Luftwaffe as an aerial gunner and photo reporter in WW1 and harboured a life-long love of flight and an ambition to be a pilot. As a picture reporter of the Berlin Illustrierte Zeitung, Willi Ruge, on reading in Kurt Hahne’s 1908  Die Illustrations-Photographie. Ein leicht verständliches Lehrbuch über Anfertigung und gewinnbringenden Vertrieb von Photos für Illustrationszwecke (‘The Illustration photograph. An easy to understand textbook on production and profitable sale of photos for illustration purposes’), that “the profession of a press photographer could be no less dangerous than that of an aviator” took the words to heart.

His earliest surviving work records the Communist Spartacist uprising in Berlin in the months after WW1 and an insurgency in Upper Silesia and his adventurousness took him on travels around Europe, Africa, South America, and into other war zones.

Between 1932 and 1935, in South America, his coverage with close-up battle pictures of the Chaco War, a butchery engaged in by Bolivia (population one million) and Paraguay (three and a half million) that took the lives of a hundred thousand soldiers, are now as forgotten as that war.

Though none of his images before 1916 survive, after serving an optician’s apprenticeship from age 15, he had already established a photo agency Presse Verlag Photoaktuell to supply the expanding illustrated periodicals market with imagery of current social, political, and scientific topics, but also to serve advertisers with commissioned product and public relations pictures. No Johnny-come-lately amongst the crowds of present flocking freelance in this new market, he had already established his reputation as a press and aviation photographer in the immediate aftermath of World War I. 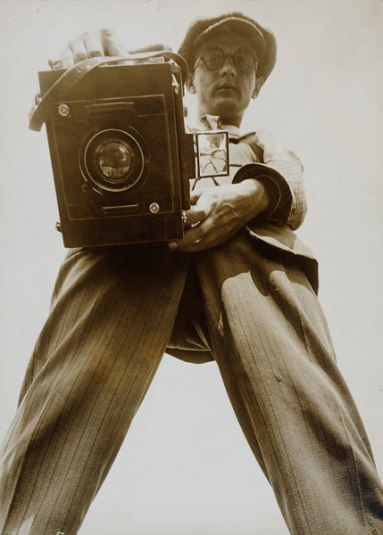 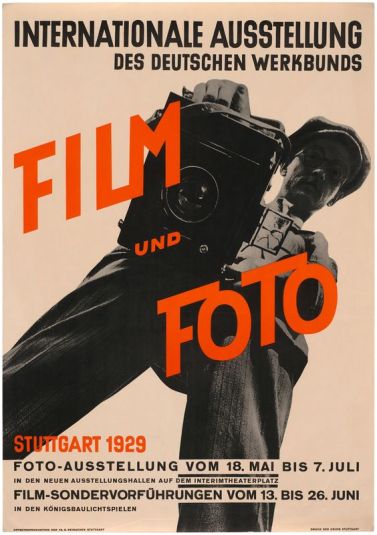 His dynamic imagery was so much a part of the ‘New Vision’ that a 1927 worm’s-eye-view portrait of his friend Arno Boettcher became the signature image of the formative exhibition of modernist photography Film und Foto of 1929.

The most vivid demonstration of the compelling quality of his work, and of his genius and daring in developing stories to stay ahead of the game is his famous reportage Ich fotografiere mich beim Absturz mit dem Fallschirm (‘I Photograph Myself during a Parachute Jump’) of 1931, which appeared in a three-page story in the Berliner Illustrierte Zeitung read by millions, but then also in British and American magazines including Popular Mechanics, bringing him international fame. 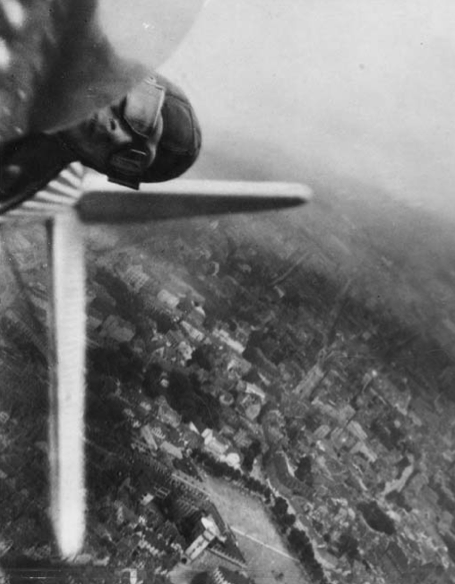 Parachuting from small aircraft before WW2 was still a risky business and this series of pictures covers the entire event, including one that, apparently, but quite improbably, shows him climbing out onto the wing to make the jump. A comparison of the markings of the various planes that appear in the series confirms that some ‘poetic licence’ has been employed, as well as another photographer.

The imagery makes maximum use of vertiginous views of the cityscape below and tilted horizons and inverted frames for effect. 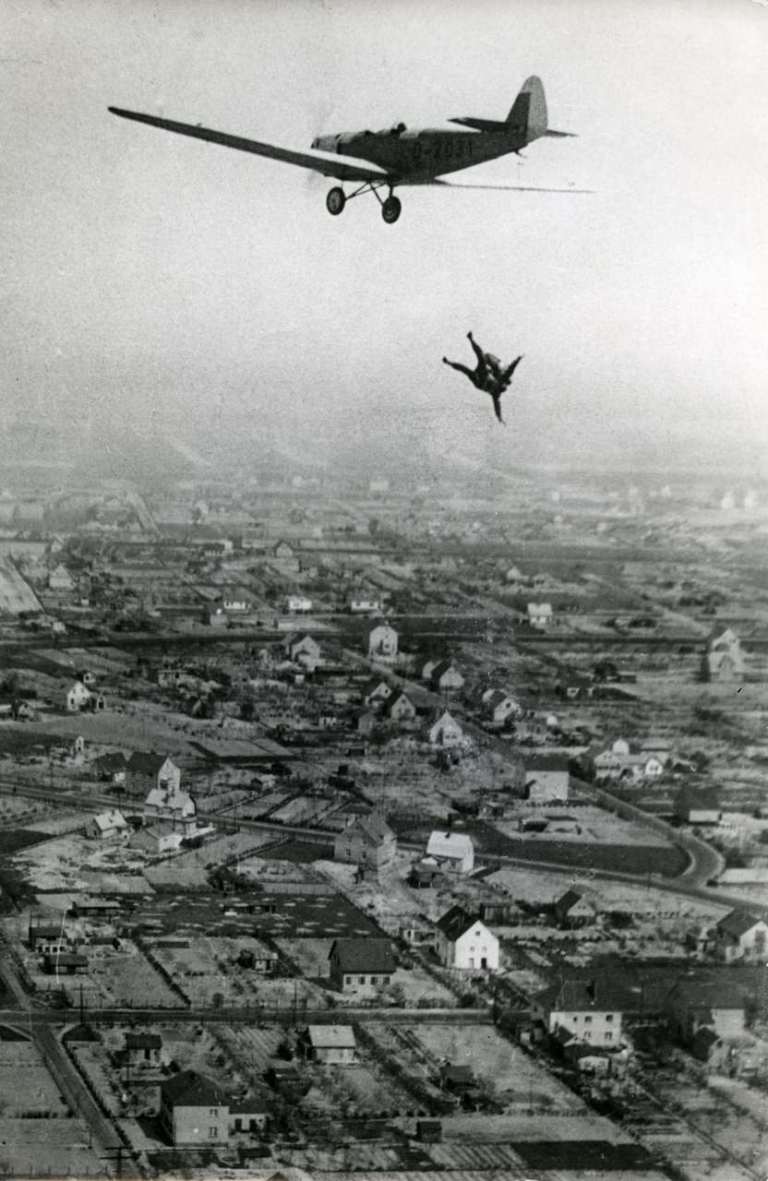 To describe the feelings when I looked upside down to earth, is almost impossible. I had the sensation of falling, of speed and danger. In the seemingly interminable time of 7 minutes to landing, I photographed my observations. 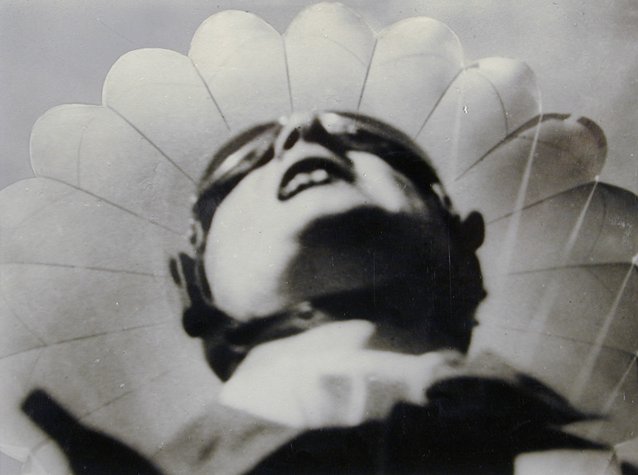 He includes shots made on the ground of his wife with son Armin in her arms, and his friends, gazing anxiously into the heavens, that are clearly set up to inject the maximum emotional impact.

However, examination of focus anomalies in these images leads one to wonder about how they were made with the 35mm camera he was carrying. The canopy of the parachute in the blind shot made from his waist is focussed sharply (… und er entfaltet sich doch!; “… it opened after all!” ).

But in shooting toward the ground in the final frame, parts of the buildings below (which we see in his colleague’s picture made from another plane) are sharp, and his shoes as well, as if he were using a tilt-shift lens not then available in 35mm equipment, or the tilting front panel on a large format camera (which would be dangerously impractical to carry on a jump).

Comparison of the buildings in this shot of the parachutist’s legs and one (below) made from the other plane, adds further suspicion that some montaging has been exercised, along with a similar manipulation in printing as we see in the motorcycle racer at the top of this article. It is clear that what looks like a tuberculosis hospital with patients set out on beds in the sun [note: I have flipped it from the orientation as usually printed so that it can be compared] is viewed from exactly the same angle and at the same instant in both; a figure (of a nurse?) moving across the quadrangle aligns with the rightmost window and a tree by the road above.

In the image with the legs added, the buildings are distorted and run out of focus closest to the dangling feet, which are relatively, and improbably, sharp. Details of the cemetery wall, which should appear between the legs, have been obliterated. This could be the result of the easel being titled under the enlarger but it is certainly an effect made in the darkroom as it is the blacks that ‘bleed’ (note the tree), where in shooting out-of-focus makes the highlights spread into the blacks. The conclusion must be that the legs have been exposed over the top of the cropped lower left of the photograph below.

One can only go on the evidence in these prints because the original negatives no longer exist, lost, we must assume, in the bombing of Berlin at the end of WW2. Certainly Ruge did make the jump as everything in the picture made looking up into the parachute past his face, mouth agape in relief, appears genuine. It may be that the shot of the suspended feet, so essential as a resolution, did not project the drama that Ruge had expected, and some ‘adjustments’ had to be made.

Annette Vowinckel (*1966) of the Centre for Research on Contemporary History, Berlin, notes that German photojournalism in the 20th century was marked by upheavals. In 1933 Jewish photographers abandoned the country and were “replaced” by non-Jewish. Many of these were enthusiastic about the Nazis and were taken on at the beginning of the War as so-called “photojournalists” by the propaganda companies of the Wehrmacht. Little known is that many of these photojournalists – including Willi Ruge – continued their  careers after the war. Some changed to the service of the Allies, others tinkered a new image as a humanist-minded photojournalists.

Amongst Ruge’s pre-WW2 output are images like this one; it still employs the giddy eye-catching aerial view, shot from the gondola of an airship past the engineer-occupied propellor nacelle, and clearly puts a positive slant on the massive assemblies entering an arena beneath a giant swastika far below. His political allegiances are also clear in the following shots of German officers during the invasion of Norway in 1940 and the dynamic image of the launch of a V1 toward London for the cover of the Berlin Illustrierte Zeitung of 10 August 1944.

Willi Ruge (c1944) Launch of a V1 guided missile toward London
Although he did not join the Nazi party, he became a member of the People’s Welfare and Reichsluftschutzbundes (Reich air protection group). He also photographed clearly propagandistic reports such as those for the Legion Condor which served with the Nationalists during the Spanish Civil War of July 1936 to March 1939. Amongst other  surviving stories that he illustrated were the manoeuvers of the German navy (1934), the Neuruppin flying school of the German Luftwaffe (1935), manoeuvers of Richthofen’s Geman fighter squadron (1935), the German Luftwaffe (1935-1942), and German air raid defences of 1942. Ruge most likely worked with the conformist press not only to continue to have a livelihood, but also to not give up being close to flying.

After the war the Americans awarded him a license to continue to operate its photo agency, but the situation in Berlin proved to be exceedingly difficult and Ruge and his wife moved to Munich, working there as a “special rapporteur” on the magazine Quick where a part of the former editorial team of the now-defunct Berliner Illustrirte had found a new home. In the early 50s he released a book devoted to his life’s passion, 50 Jahre Motorflug (50 Years of Powered Flight). Ruge died in 1961 in Offenburg.

One thought on “October 23: Instantaneous”