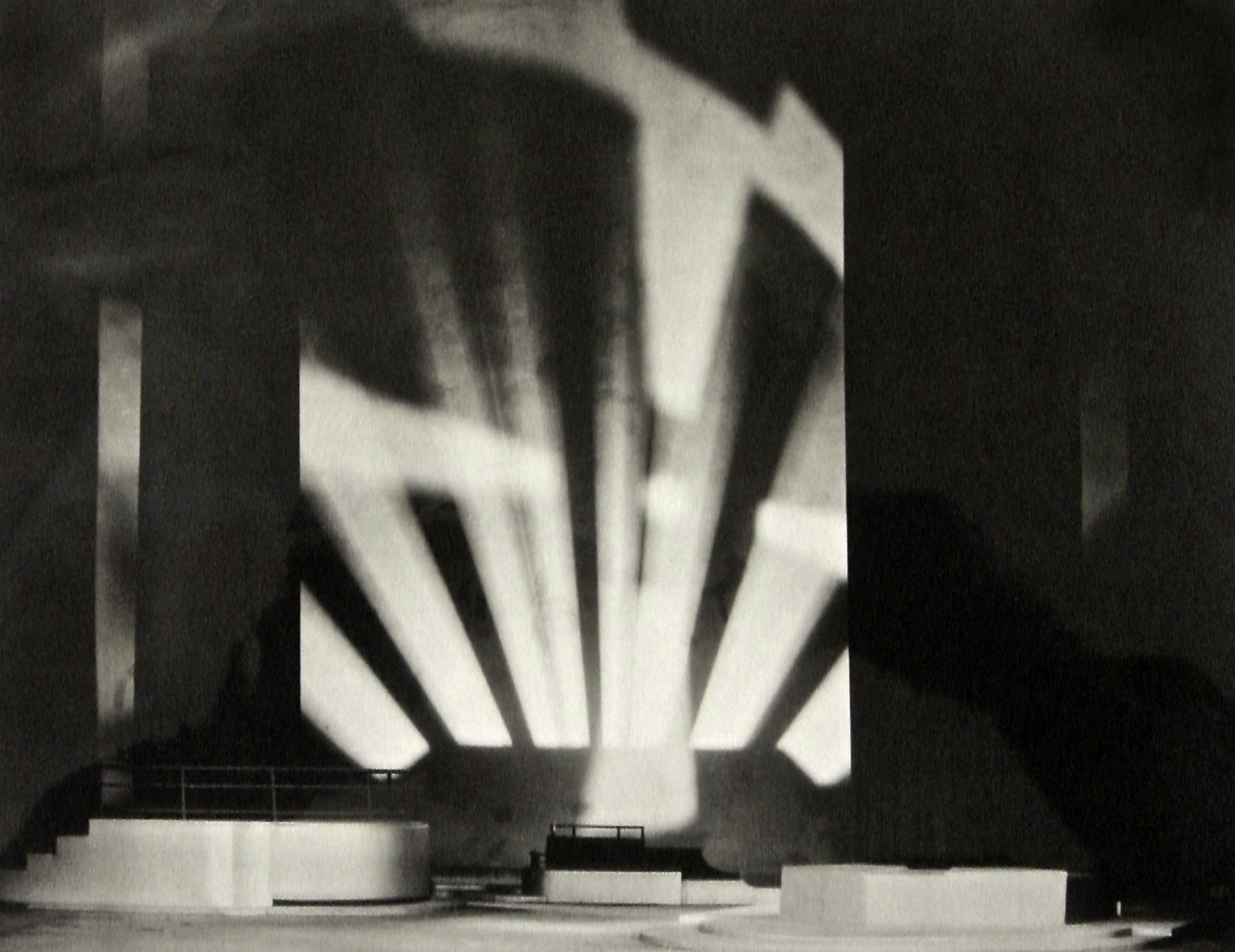 October 16: Light as a tangible, plastic medium emerged in the art and photography of the 1920s.

The most frequently cited example of this movement is Lazlo Moholoy-Nagy (1895–1946) at the Bauhaus in Germany, in particular through his photograms, photographs, “photoplastics,” films, and kinetic sculptures and light modulators. But since today, October 16, was the 1879 birthdate of his American contemporary, Francis Bruguière (†1945), let’s look at his images which are such a stunning manifestation of this idea. Furthermore, he provides intriguing instances of the ‘synaesthetic’ or ‘intermedia’ blending of two sensory media.

I finished a previous post with the statement: “Photography may be abstract”. Bruguière takes us further along in attempting to resolve a much debated argument in relation to photography, since work he began around 1922 is so frequently referred to as ‘abstract’.

Such imagery can be found in his collaboration with Lance Sieveking (British, 1896-1972), on a book titled Beyond This Point of 1929, which also is an example of intermedia. The scenario of Beyond This Point, written in a radical, non-linear style by Sieveking, traces the varied potential responses to a series of three different crises that might befall the modern man. They set out deliberately to disrupt the traditional illustrative relationship between text and image, as the book’s introductory page explicitly states:

This book is an example of absolute collaboration. The text, which has been written by Sieveking, is inseparable from the photographs, which have been designed by Bruguière. In each section of the book, the photograph and the text are integral parts of each other.

Francis Bruguiere and Lance Sieveking, title page of Beyond This Point

Throughout the book, the text flow is interwoven with Bruguière’s images, which clearly are intended to pick up and continue the passage, which breaks off mid-sentence on the page before, returning to another point in the narrative of psychological traumas inflicted on the human psyche by the modern world.

Harry Alan Potamkin (American, 1900-33) was a poet, educator, and Marxist who wrote extensively about film theory between 1927 and his early death in 1933. As American correspondent for Close Up, the British avant-garde film magazine, Potamkin was introduced to Bruguière’s work, and he was in direct dialogue with the artist about his experiments in abstract photography, and his plans to pursue them into the cinematic medium as well (which, though frustrated in America, were realised with Bruguière’s co-creation with Oswell Blakeston (the pseudonym of Henry Joseph Hasslacher, 1907–1985) of the first British abstract film, Light Rhythms (1929-30) after he moved to London). Potamkin coined the phrase ‘Compound Cinema’, and noted the filmic qualities of the book, in an article written in 1930 titled Tendencies in the Cinema.

Lance Sieveking, writer, and Francis Bruguière, photographer, have endeavoured to compound the photograph with the word. These are aspirations against the medium and towards another form, the cinema.

Earlier, Bruguiere, driven by economic necessity, became a very successful commercial photographer for Vanity Fair, Vogue, and Harper’s Bazaar, and an assignment that he undertook for Theatre Arts Monthly, documenting a performance of Thomas Wilfred’s “clavilux” light-organ, introduced Bruguiere to the possibilities of light as subject.

Light became critical in his professional work as a photographer in the modernist New York-based New Stagecraft theatre community between 1919-1927, whose chief set and lighting designer Lee Simonson believed that light was “the palette and the chisel of scene-designers today,”.

In order to recreate in monochrome the theatre lighting as the stage designer wanted it to be experienced by the theatre-goer, Bruguière developed a complex procedure which utilised a stationary camera and a long exposure time, during which he manipulated the stage lights. He was hailed as “One of the first artist-photographers of the theatre”

Bruguière applies these techniques in the above image in Beyond This Point which he made by opening his camera shutter and moving lights directly across the front of the lens. In his ‘cut-paper abstractions’ too, Bruguière used long exposures and multiple exposures whilst manipulating the lighting as can be seen in these pages from the book:

These latter are drawings first, inscribed with the knife, in the manner of Lucio Fontana’s slashed canvases begun in 1948 (Bruguière started and finished his career as a painter, and abandoned photography in Britain after 1940).  In fact, Bruguière, in the act of making the photographs is ‘blind’; he will not see the result until after the negative is processed, since he is applying different, raking light sources over a duration and superimposing different cut paper designs through double-exposure. They are thus doubly tactile; he feels his way around the forms, his hand, holding the light source, sensing the building of the image.

Bruguière’s interest in Cubism, in which he combines his painting with photographed objects confirms this haptic impulse in his work and are a creditable synthesis, or ‘trans media’ compound.

A photograph has been said to look “just like nature,” but no one has ever agreed just how nature looks; it may, therefore, be questioned whether a photograph really looks anything like nature.

If such a disjuncture between reality and its correspondence in a photograph exists, might a photograph be abstract?

[Note: I recommend Kristen A. Adlhoch (2014) ‘The Synaesthetic Experience of Light: Francis Bruguière’s Abstract Photographs’. In Interfaces 36 (2014-2015) whose new perspective on Bruguière has informed aspects of this article, and Enyeart, James. Bruguière: His Photographs and His Life. New York: Alfred A. Knopf, 1977 for biographical facts]