Is faking a photo ever justified?

More than 30,000 bombs fell on Britain during the Blitz which lasted from Sept 7th, 1940 to May 21st, 1941. In 71 attacks over a period of 267 days, London was bombed by the Luftwaffe for 57 consecutive nights. More than a million houses were destroyed or damaged and more than 40,000 civilians were killed.

October 9th marked the 32nd day of straight bombing raids against the United Kingdom, that night’s raid struck the iconic St Paul’s Cathedral but luckily the bomb did not detonate. [An interactive map of every bomb dropped on London by the Germans can be found at Bombsite.org]

Government censors who were anxious not to cause widespread panic kept a lid on press photographers who wanted to show the devastation wrought by German bombers.

Prints were sent to the MOI Press & Censorship Bureau by editors and press agencies if they were unsure whether what was shown in the image or described in the accompanying press caption might contravene censorship guidelines.

One print of every photograph submitted – marked with the censorship decisions – was retained to be used as a guiding reference to enable future decisions. This library, now become the Ministry of Information Press & Censorship Photography Library archive, is valuable to historians such as doctoral student Jane McArthur of Edinburgh University.

As a seasoned photojournalist, Fred Morley had first joined Fox Photos in January 1926. It was a major London Fleet Street press agency active from the early 20th century through the 1980s and specialising in human interest stories.

His strategy to get such a picture published was to play on the British ‘stiff upper lip’ cliché that would appeal to the censors; show that life was going to carry on as normal, a formula he and other press photographers continued to employ… 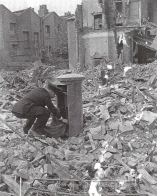 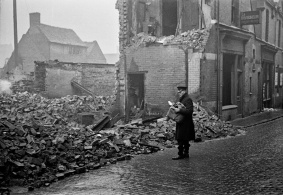 G.B. ENGLAND. Coventry. A postrman on his rounds finds the address on his envelope is a smoking ruin. 1940.

The subject here is not a real milkman (and neither is the postman collecting mail from a letterbox amidst the ruins in his companion shot above). He dressed his assistant in a borrowed uniform and got him to stride cheerfully through the wreckage carrying a milk carrier, a spare bottle shoved into his right pocket for authenticity. The subject is set against a gap-toothed skyline on the diagonal of the now non-existent street which is visually continued by a broken doorframe to the left.

The figure is sharply delineated despite a shutter speed slow enough to render one leg in motion blur. The smoke-filled atmosphere sets him boldly forward in relative contrast while the plucky little figure is set in close alignment to the valiant firefighters in the background, his arm continuing the line of the hose which generates a mist of steam and smoke that would be the envy of any fashion photographer.

The God of Normality Returned marches out of the fog of war; what a superb example of positive propaganda!