October 3 1867 is the birthdate of Pierre Bonnard, for whom the camera preserved the fleeting visions of volupté domesticity.

He’s not an immediately obvious subject for this blog, given that he was a painter. However for a 20 year period of his long life, and probably with reluctance, he took up the camera, because it was a trend, and because photography had become much easier with the advent of the Kodak. Emile Zola, August Strindberg, Edgar Degas, Edvard Munch, Franz von Stuck, Maurice Denis, and close friend Edouard Vuillard, all had cameras and all were influenced  in their art and writing by the still relatively new medium. Bonnard also associated with the Lumiére brothers. By the 1880s cameras had become smaller and lighter and negatives were industrially prepared, especially with the appearance of the Kodak portable camera, its small negatives on pliable film in 1888, photography became accessible to amateurs.

Bonnard may have been introduced to the photographic process by Vuillard, who was technically adept in the medium and processed his own film and prints, but Bonnard was also acquainted with the Lumière brothers, Auguste and Louis through his musician brother Claude Terrasse, photographing them at the family estate at Le Grand-Lemps. Though no doubt Bonnard may have been influenced by these contacts in his own photographic vision, he didn’t learn how to enlarge his photos and makes no mention of his photography in his writing. Bonnard’s period of highest photographic activity was 1898-1916. 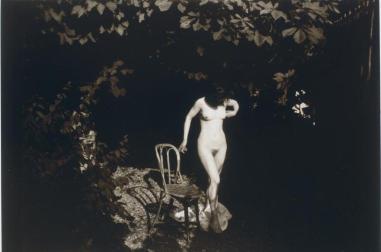 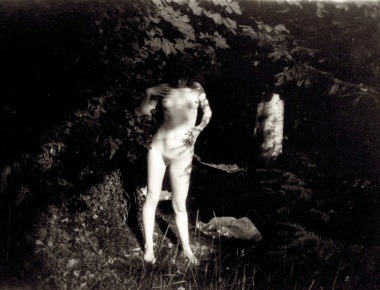 Contrary to the perception that Bonnard never directly quoted from his photograph, his book illustrations for French poet Verlaine’s Parallelement of 1900, and a production of the Greek classic by Longus Daphnis and Chloe, published by Ambroise Vollard in 1902, are direct transcriptions.

He did use the camera to capture the fleeting domestic moments for which he is admired. In one painting, La Sieste, completed in 1900, one can trace the impact of photography on this, arguably the most painterly of painters.

We in Victoria, Australia, are  blessed with its public possession, in our National Gallery of Victoria in Melbourne, since it is a painting with a noble pedigree. Acquired from the artist by Paris dealer-collector Ambroise Vollard (1866–1939) of Paris, before November 1905; then purchased for the collection of Gertrude Stein (1874–1946) and Leo Stein (1872–1947), Paris, where it hung  November 1905 until 1907 until exchanged (for a Renoir) through Ambroise Vollard, who sold it on in 1907 to dealer Galerie Bernheim-Jeune, Paris, from whom by 1914 art historian Sir Kenneth Clark (1903–83) purchased it for his Upper Terrace House, Hampstead, London, residence where it remained until c. 1943. It then became the possession of  Mrs S. Kaye, Cookham-on-Thames, Berkshire c.1943/47–1949, before being passed on to dealer Lefevre Gallery , London, and then quickly snapped up for the NGV on the advice of A. J. L. McDonnell, from the Felton Bequest, 1949.

The painting, though it is not in Bonnard’s later still more sumptuous, enveloping colour, evokes a mood that many have identified as post-coital. It is day. Marthe gives herself up to lassitude, curving like an Art Nouveau tendril across sheets so rumpled that it is only after minutes of contemplation that we notice the beribboned dog, also deeply asleep, shape-shifting amongst discarded underclothes.

The detail of Marthes’ toes, still curled in sleepy delight, and her foreshortened leg serve as an anchor for our eye from which it can roam lazily into the shadow drawn over the model’s slumbering dark head and flushed face, where we are arrested by the crowded forms of a still life comprising the coupled vessels of a shared afternoon tea. Bonnard prompts us to share the passage into satiated sleep with the gracefully recumbent figure from our own memories, through still more subtle means; the shifting floral wallpaper patterns mirror and abstract the effect of waking consciousness giving way to fancy-filled dream, then the steady, deep respiration of full unconsciousness.

Gustave Geffroy, writing in Le Journal, in 1899 noted that Bonnard, who described his work as peinture panthéiste, painted everything ‘with an apparent negligence, a kind of disorder, which soon reveals the very delightful spirit of a painter who can harmonize’. He has the all-enveloping vision of the camera, though rarely is his work ‘photographic’ in that he combines multiple angles of view.

The figure’s pose, Sasha Newman asserts, is based, right down to the way the left foot rests on the calf of the right leg, on a Roman copy of a Greek sculpture in the Louvre. Such is art history.

For the photographer, a more profound revelation comes from seeing the way Bonnard shapes the facts of his peaceful domestic life and environment into the matter of art. A series of photographs he took of Marthe prior to making the painting, probably as direct studies for it, reveal the transformation; they are less about her pose than about the space, this bedroom they share, and how it becomes the canvas. 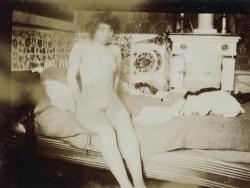 Many art historians take the position that Bonnard rarely worked directly from the model, preferring to rely on memory for the sake of concentrating on paint and its effect, and that he certainly did not work from photographs. But perhaps during this period, and especially in this landmark work, photography served as a bridge to his mature style, before he became one with colour.

Reminiscing on Bonnard’s great gifts, Maurice Denis recalled the past: ‘Where are the days, Bonnard, when by perversity (for the sake of argument) to upset Serusier’s pontification you said to him that if they could do photography in colour “les peintres seraient foutus”? (Denis ‘L’Époche du Symbolisme’ G.B.A. 1934 pp. 165ff, from Théories, Hermann, Paris 1964 p.66). In this, I look to Aaron Scharf’s 1968 Art and Photography and share his conviction that more artists use photography than would admit it, but that the best eschew slavish copying.

As a photographer, with a simple device, he has a great deal to teach us about light as emotion. The vignetting of the simple Kodak lens, and its wide-angle field, find their way into the painting as much as do the patterns of mattress ticking and wallpaper that the film records, to become part of his idea, to effect his transmission of physical sensation.

One thought on “October 3: Couché”