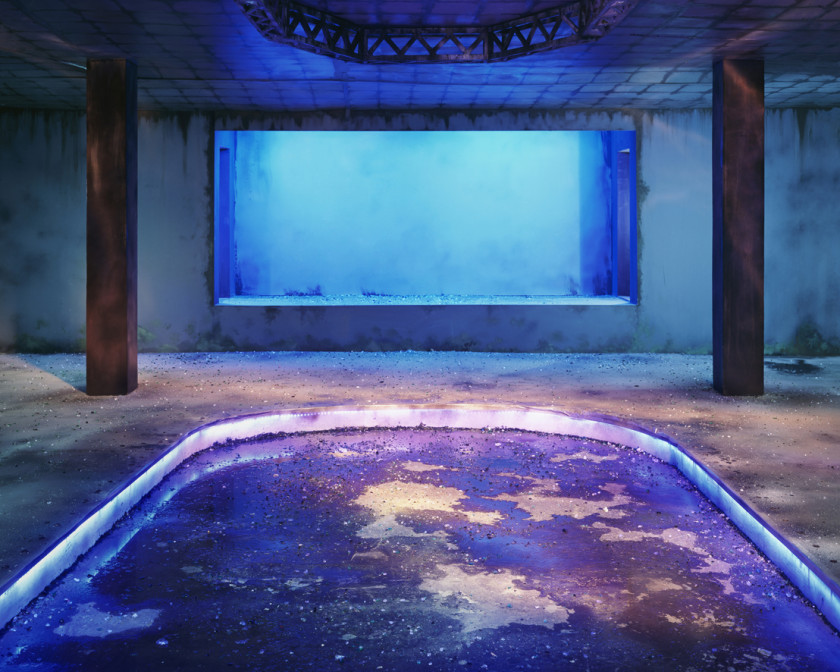 May 20: The photographic image resembles a room walled in by its borders beyond which nothing can be seen, truly a camera obscura.

Unlike the movie frame there can be no hope that it will pan left or right, or zoom back to reveal what surrounds this boxed segment of space.

And yet we are used to the medium being described as of a mirror or window too, in terms of a dichotomy coined by John Szarkovski (1925 – 2007) MoMA Curator of Photography 1962-1991, in his famous Mirrors and Windows: American Photography Since 1960 (1978) which distinguished two approaches to photographic expression; the self-expressive ‘Mirror’ and the outward-looking ‘Window’ of the documentary and the street photograph.

Two photographers whose work is devoted to this idea of the room of the photograph are   Serge Clément who was born on this date in 1950 in Valleyfield in Quebec, and Chen Wei who is opening his solo show this evening 4-7 pm at ShanghART Beijing which continues until 26 June.

Take an early example by Chen Wei (*1980 and not to be confused with Chinese veteran rights activist Chen Wei), his House of Recovery of 2008. A fearsome image dominated by a bed in which blood pools in the mattress. Beneath the bed are khaki clothes, power tools, rope and a baited rat trap. Around it on grubby carpet tiles are a hairbrush tangled thickly with black hair and an ice skate. The old style telephone hangs off the hook, while a dead black cat is suspended from then coat rack. On the walls which meet at damp-stained corners are a darts target and a picture of a flying saucer. The door, which sports redundant deadlocks, hangs open. The injured person has been carried away. The scene is entirely constructed in Chen Wei’s studio.

This strategy was a response to his desire to make an image of a bus stop at which buses no longer stopped, and that had become a gathering place. He had planned to take pictures at the site of the actual bus stop, but government regulations forbade him. The consequence of taking pictures would be that “…my father would be told, and he would tell me to take pictures of other things, new things. Otherwise, people would think bad things of the family.” As the only artist in a family that does not appreciate art, this was a big risk.

Still determined to make the image (I can find no copy of it anywhere), he recreated it in his studio, a drawn-out and difficult process.

He builds large installations to photograph, but only after making sketches of his ideas. There is a narrative, but the viewer is left to interpret it themselves, piecing together a story from densely crowded props and objects and human subjects whose behaviour is puzzling. The meaning of his imagery is not immediately apparent.

Their activities are inspired by his interest in eccentric pursuits of alchemists, philosophers and the insane and these themes are mixed with his poetic memories of childhood fantasies and his early life in Zhejiang Province.

Ultimately these converge on the realities of living in modern China that face his post-cultural-revolution generation who have none of the certainties but enjoy a little more freedom than their parents. In the images however sense of surveillance and control pervades these cramped rooms.

Though he works in series that include Everyday, Scenery and Props, House of Recovery and The Augur’s Game he regards them as a continuum. He has exhibited widely, including here in Australia, in a show The Club which finished on the 7th of this month at Melbourne’s Centre for Contemporary Photography which presented a series of photographs and installations that replicate Chinese club culture.

Leading up to this is recent, less crowded imagery made after 2013. Entrance hints at the nature of nightclubs which as Chin reports “were once the realm of intellectuals and artists as a place to exchange ideas” in a rare opportunity for free expression. While laws suppressed the assembly of large groups in public, in order to reduce protests and riots, the clubs were exempt.

Though his symbolism of the ‘room’ constructs was obscure, almost hermetic, New Stairs, stacked like a pile of gold bars, indicate to anyone the new prosperity under more relaxed economic policies and the emergence of a middle class which has seen a change in status of clubs, which are now “no longer radical spaces,” says Chen.

Chen recreates the architecture, interiors and culture of nightclubs to celebrate this previously undocumented subculture and to provide a commentary on wider social changes that have been taking place in China, though his critique is still oblique. Given the remaining political pressures, the nightclub must serve as a microcosm.

“For me, these enchanted bodies immersed in the smoke and laser beams reflect the current mood in society today — be it cultural, economic or political. No one knows where we are, and which direction we will be heading in tomorrow.”

Serge Clément is older than Chen Wei, and of exactly my own generation born in Valleyfield, Canada in 1950. Having taken up photography in his mid-twenties, he has devoted himself exclusively to art photography since 1993, his works being shown in internationally.

Where even the cypress forest in Chen’s A Lighthouse Was Winking in the Far Distance is a fabrication, Clément’s subject matter is drawn from his observations on the street and usually in the urban jungle. His picture above is a view from inside the Time Warner building of the Columbus Circle roundabout at Central Park, taken in winter and, I assume, approaching Christmas.  What distinguishes this image from so many taken from the same vantage point is the way a reflection of windows works to divide the top from the bottom of the image, like the perforations on a card. They also divide a cold and bleak city scene and the bare trees of the park from a starry fantasy.

Most of his photographs are monochrome, but like the more recent colour, they are distinguished by an intrusion between the viewer and the subject, often a reflection, but sometimes just the barrier of the glass which in this case (above) is caked in blobs of driven snow that loom over tiny, distant, illuminated figures walking on the thick snow. Most likely (Clément does not generally title his photographs), this is Boulevard Saint-Laurent which runs north-south through centre of Montreal and is nicknamed La Main, a street that Clément has lived on for most of his adult life.

He knows it as a place where he has walked and photographed, though acknowledging that others had preceded him:

…Edward Hillel [Edward Hillel ‘The Main: Portrait of a Neighbourhood’, Key Porter Books, 1987] who had photographed the shopkeepers, …Denis Plain [*1939], who photographed there for his work on Montreal [‘Montréal, 1978-1980’] in the 1980s … Saint-Laurent was my training ground of discovery and experimentation even before I moved here. It was also a frontier, not just geographic but linguistic.

Clément’s takes a different approach to Boulevard Saint-Laurent and any street on which he photographs whether it is in Montreal, Lyon, Tokyo or New York. It is more intimate, solitary, and secret.

Unusual in being titled, Vitrine, is a recent image in which a frieze of carpenters is set adrift between two planes that are alien to one another; the busy pedestrian traffic, and a domestic yard, with washing on the line. Both inside and outside are paired figures whose heads lean close; two Asian youths on the left, whose legs form a graphic, eye-catching M shape and diagonally opposite, silhouetted heads in a doorway. The sky seems to bear no relation to the other parts of the scene, filled as it is with the zig-zag limbs of bare trees and power lines. It is only later that one notices Clément’s own reflection, broken up by the light inside the building into which he points his lens.

His exhibition of early last year held at Fotografie Forum Frankfurt 21 (Nov 2015 – 25 Jan 2016) was titled Dépaysé, a French term that describes the condition of being “out of place”, feeling “strange” or “lost”. That is apparent in these photographs made of inward- and outward-looking windows, in which we encounter pyramids in Berlin,…

a teary view of the Hudson River,…

and the pointillisme that vibrates around the retreating figure of a behatted man.

It is his 1999 image Liquid that best represents his capacity to filter reality using whatever transparent or veiled medium is available in the urban environment to achieve this sense of dépaysé.

It is a superimposition that operates like one’s thoughts unreeling in our heads over the noise of the traffic as we traverse the city. It is not as if we ‘lose ourselves in the city’ but rather that its solidity is lost to us, behind an internal monologue. He disorients us somewhere between a real and an imaginary place.

To label his work merely ‘surreal’ is to misrepresent this capacity he has to submerge us in the environment he photographs, to invite us into an intimate conversation with it, and into one the city is having with itself.

Serge Clémente exhibits, but the main outlet for his photography is the photobook, and the value of that format is the opportunity to decide which images will influence the reception and effect of those adjacent or over the page, or through a whole series of pages and thus to break out of the box of the photograph. 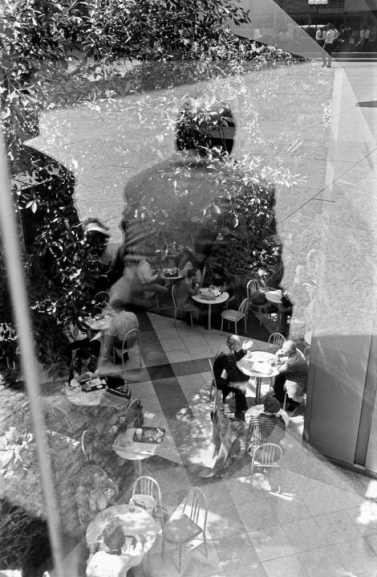 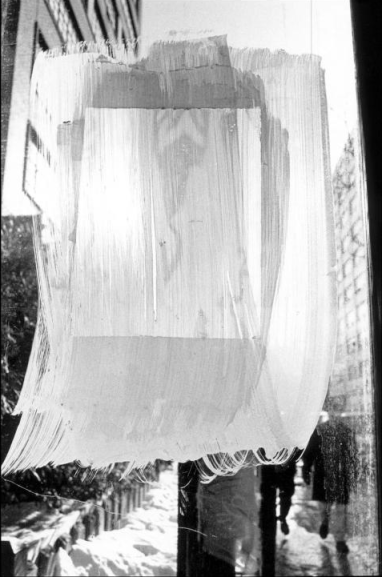 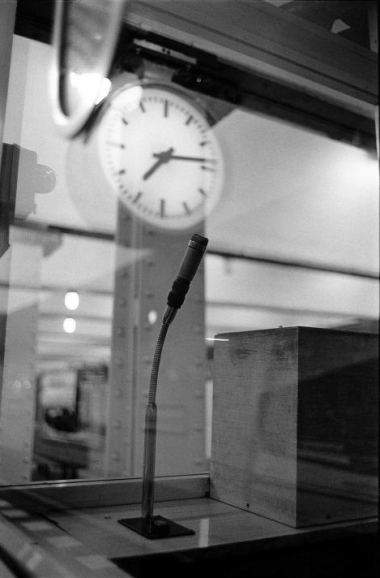 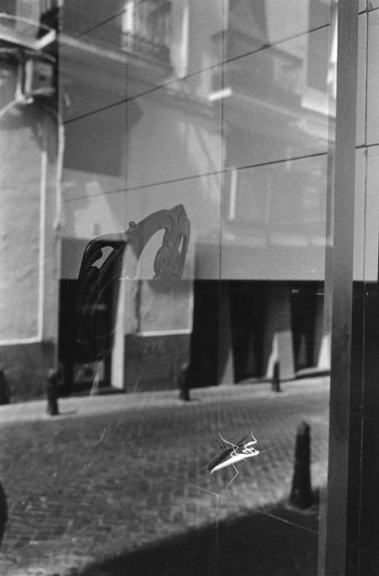