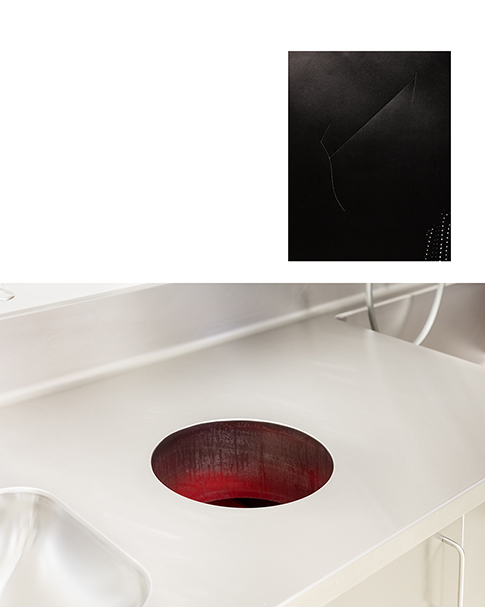 April 18: How can photography extricate itself from the traditional photographic canon and become contemporary visual art?

The House of Arts, Jaroslav Král Gallery, Malinovského nám. 2, Brno in south-east Poland, opens Jiří Thýn’s In Search of a Monument II tonight, and the exhibition continues until  28th May.

In a multi-media installation Jiří Thýn (*1977, Prague) includes photography and objects in a non-narrative assemblage, a format he has been exploring in a series of exhibitions. It looks ‘difficult’, but there’s a logic at work, and more importantly, a commitment to photography as a form.

Since September 2014, and after receiving his doctorate in 2013, Thýn has been a professor at Prague Film and TV Academy, Department of Photography.

He graduated from the Studio of Photography at the Prague Academy of Art, Architecture and Design under Pavel Štech, a documentary and architectural photographer, and Ivan Pinkava who reworks the traditional language of Western culture, for example by photographing as drapery studies (a standard drawing studio genre) a subject matter of discarded furniture upholstery and foam rubber stuffing.

Thýn was a founding member of the Ládví group, which operated on a volunteer basis for the benefit of protecting the public space in the local housing estate. In 2007 the group, clearly endorsing his views,  published an interview with curator Jan Mlčoch about his last actionist performance in 1980 in which he turned the De Appel Gallery in Amsterdam into a public dormitory. Mlčoch terminated his career as artist because “At that point I lost interest in these I-me-mine things from the early seventies, I went in the opposite direction and was interested in the Salvation Army, or missionary activities. I read the letters of the Baroque-era missionaries from South America, and such things. That’s what I was into back then. To put it simply, departing from the personal approach and towards the public.”

Given this background it is appropriate that Thýn participated in Manifesta 11 (11 Jun–18 Sep 2016) in Switzerland, which around its theme “What People Do for Money” required 30 international artists to develop projects with “hosts”; a broad range of Zürich professionals of their choice including a pastor, prostitute, policewoman, and paralympian. The results of these encounters was exhibited at the hosts’ respective workplaces (the so-called satellite venues) as well as at the main Manifesta venues. Jiří Thýn chose to collaborate with Sabrina Meyer, preparator at the Institute for Clinical Pathology in the University Hospital in Zurich.

In their correspondence the pair exchanged cut-up magazine photographs and photographs by Thýn of the pathologist’s working spaces, which were exhibited, and a series of text works applied to the windows of her hospital’s atrium in coloured vinyl.

Hettie Judah in reviewing Manifesta calls attention to the fact that these texts are in English and suggest that they are not intended for the patients or workers of the hospital. That is fortunate because it thus remains a semi-private exchange, as Jiří Thýn, fascinated by this routine relation to death, contemplated the effect this job has on its practitioner in an intimate exchange of letters with his host, excerpts of which are on display. These are ideas that would make challenging reading for the patients waiting beneath the windows in Thýn’s photographs of the installation which I assume are part of the new show. Given the evolutionary nature of Thýn’s work, that is not certain.

The match with Sabrina Meyer, the pathology preparator was relevant to Thýn because he has been reconceptualising art by employing scientific principles in three exhibitions in 2011-2012, that are called Basic Studies, in which ‘study’ refers not to its conventional use by artists to refer to preparatory sketches or colour tests. Basic Studies in science is done to establish the first set of relevant data as a basis for further work. Applied in these exhibitions, Thýn thus indicates, basic studies are a phase of work one that signifies that it precedes something; an important subsequent, yet not completed step, and emphasising the importance of continuity. For example, in 2014 his first of two solo exhibitions of that year were called Basic Studies / Nonnarrative Photography in which he tested the problematic of the abstract as applied to photography; and for The Photographers Gallery exhibition Double Take: Drawing And Photography 15 Apr – 3 Jul 2016 he exhibited photograms from his Drawing by Light (2010/16) series, where overlapping exposures result in modernist monochrome images, and a sculptural installation (of the same title) was an arrangement of a wire and white ball emerging from a blank wall lit by theatrical RGB lights which teased the viewers’ perception of 2D and 3D space and objects.

This is manifested best in the use of the cutout, seen above in installed arrangements which are also visible, though in a different configuration and with changed elements, in the hospital windows.

The cuts continue his play of 2D against 3D perception and are made intuitively but as a response to the resonance of one image against another. Some of the forms in the black and white photograph of an abstract welded steel sculpture are riffed in cuts made over a map and in a captioned page opposite a rose in a fashion magazine.

Thýn began using photographs of magazine reproductions cut through several layers of pages with a scalpel in two versions of Basic Studies / Nonnarrative Photography and Consciousness As A Fundamental Attribute I and II exhibited in 2014.   Cutting into the photographs was a physical ‘reading’ of them, a marking out of these intuitive responses.

Expect at Jaroslav Král Gallery then a further evolution, using such logic, of Thýn’s fusion of conceptual and contextual approaches to making contemporary art of photography.