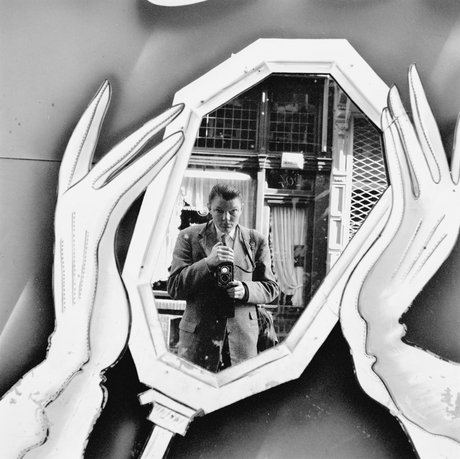 An early practitioner of the street photograph was Paul Martin born on this date in 1864 (†1944), the same day of the year as Dutch master of the street, Kees Scherer was born in 1920 (†1993), though he almost sank into obscurity.  Closing today 6:00pm at art.endart, Drontheimer Str. 22/23, 13359 Berlin is Krzysztof Jarzebinski‘s Bunte Haut (Colourful Skin) in which he separates his subjects and their street clothes.

Paul Martin was born in France and moved to London in 1872. His strong talent in drawing brought him work in Fleet Street as a wood engraver and no doubt sparked his interest in photography as much of his work would have involved copying photographs, wood engraving being then the means of reproducing them in newspapers. He purchased his first dry-plate camera in 1884 and joined camera clubs to learn as much as he could about the medium.

During his lunch hours Martin started photographing on the surrounding streets of London. Wood engraving is exacting, close work that requires intense concentration since mistakes are not easily covered, so it is easy to imagine the sense of liberty Martin must have felt to be out on the street stalking human quarry; “It is impossible to describe the thrill which taking the first snaps without being noticed gave one,” he said. The people he photographed were workers and craftspeople like himself, though his labour while still manual, was somewhat more rarified and artistic. For him, the working class would have provided a less confronting subject matter than the gentry who would have felt entitled to challenge him. This flower seller at the (now defunct) Ludgate Hill station would have sat not more than five minutes walk away from his Fleet Street office.

His camera became available in 1889 and was considered a ‘hand camera’. Constructed of mahogany with a simple reflex viewfinder on the top, and weighing only 1.8 kg, it  was camouflaged in brown paper to resemble a parcel. Plates were stored in an internal rack and flipped down once exposed. His camera presents us with a waist-level view, a child’s perspective on the scene in effect, and equally naive.

The Facile Hand Detective Camera designed and manufactured by F. Miall, and sold by Jonathan Fallowfield in 1889.

Martin’s motivation in undertaking street photography was practical, a means of improving and testing his technique in surreptitiously using the Facile detective camera (he was a shy, modest man); it was not to undertake any kind of social survey or to make social comment. He was no Jacob Riis or Lewis Hine!

were not encouraging towards the type of subject which I was then taking … many members regarded some of my studies as rather infra dig, or even shocking. They felt that a plate demanded a noble and dignified subject, a cathedral or mountain or family party dressed up in their Sunday best.

In the middle of the 1890s, Martin adapted his process of making images for lantern slides; this was the final product which he showed at club meetings and in competitions and these he would mask with opaque material and a high contrast copy negative made so that the subject was isolated from the busy backgrounds for which his photographs are now so highly valued as honest records of Victorian life. The strategy also protected him from any legal issues that might arise from what else the images might show, such as copyright commercial signs, etc.

I can only find one example of the apparently 600 Paul Martin lantern slides now held by Austin University (they are not available online). Here it is courtesy of a 2004 paper by Lynda Nead, Birkbeck College, University of London.

As Martin explained in an article in Amateur Photographer (6 November 1896), ‘‘When I first saw one of these slides the idea struck me . . . that living objects might be substituted for the statues.”

The resultant lantern slides were a photographic equivalent to the popular and ‘quaint’ nostalgic woodcuts, Street Cries of Old London published in various forms, including cigarette cards, throughout the century.

In making his petrified ‘statues’, Martin is at odds with the aims of contemporary street photographers for whom the environment is as important as, or at least provides a context for, the human subject. His purpose shows in the centralised compositions which he intended later to crop and mask. Despite this stricture, and in an appeal to the prevailing Victorian taste, has an eye for the anecdotal genre, the theatre of interactions between his subjects, and this is sometimes reflected in his titles.

By his own admission, Martin, had he the finances, would have followed the aesthetic route of his fellows at the camera club:

Had I independent means, I should probably have pursued exactly the same roads as the other pictorial workers of the nineties whose ambition it was to make their photographs look as much like a painted picture as they could. Careful composition, superimposed clouds, soft printing and other technical tricks were used to produce effects which were certainly beautiful, but which took the photographer further and further away from life. I was for a time as keen as anyone and fairly competent, but it was an expensive hobby and never really had the same interest for me as the real snapshot – that is, people and things as the man on the street sees them.

He was awarded the Royal Photographic Society’s Royal Medal in 1896, not for his lantern slides but for his series of pictures shot at night – ‘London by Gaslight.’ This series was one of the first serious attempts at night photography and attracted the admiration of Edward Steiglitz.

In 1899 he set up a photographic firm in partnership with H.G. Dorrett as Dorret & Martin, after which he no longer had the time, or perhaps no longer the inclination, to make street photographs.

Keen on photography since his boyhood, after the liberation and in his mid twenties, Kees Scherer became a freelance photojournalist for for Dutch newspapers such as Het Vrije Volk, Trouw, de Volkskrant and Algemeen Handelsblad. His reports about the flood disaster in the province of Zeeland (1953) and the Hungarian uprising (1956) were formative in launching his career amongst the group of photographers, the Nederlandse Vereniging van Fotojournalisten (or NVF, the Dutch Association of Photojournalists) who established World Press Photo out of a desire to improve press photography in the Netherlands. 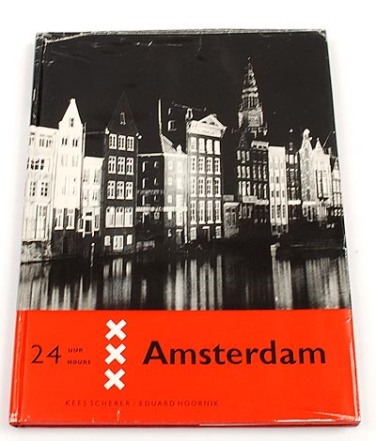 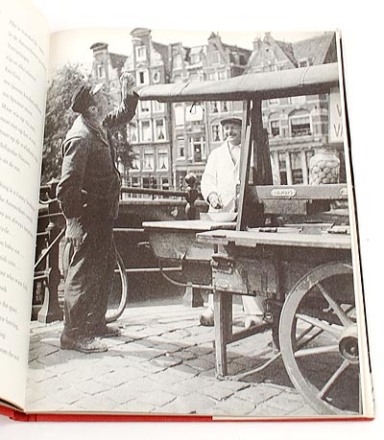 He produced significant books, including 24 Hours Amsterdam (1957) and Here’s New York (1960). These were products of his love of the city, whether Amsterdam, London, Paris or New York, and its inhabitants. 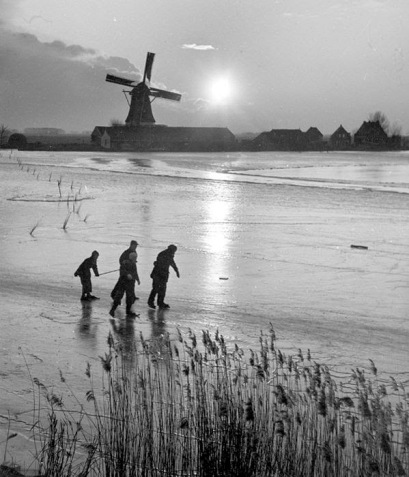 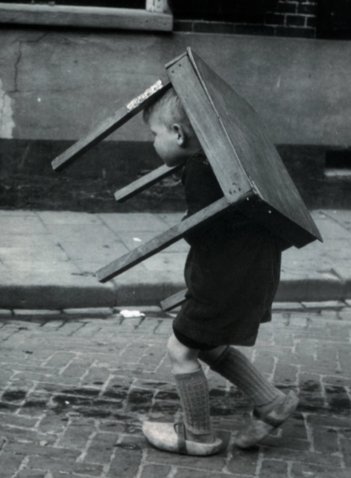 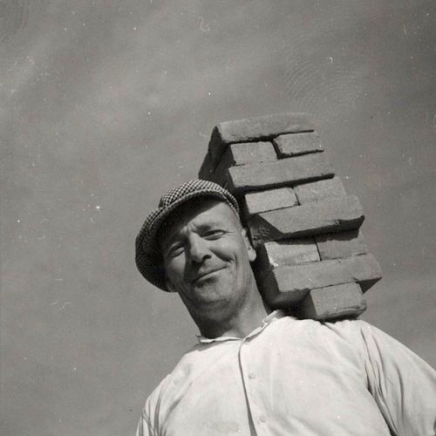 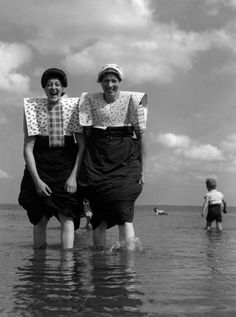 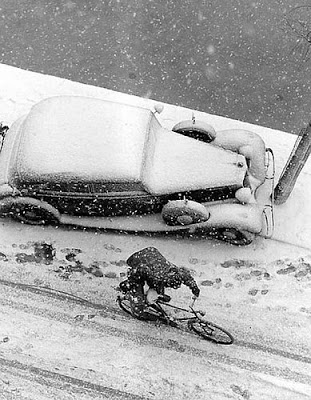 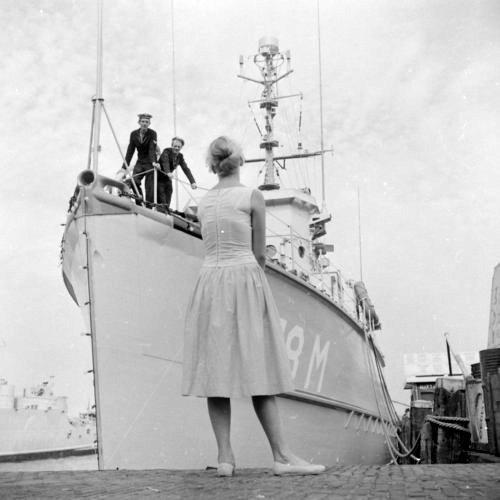 It is his sense of humour as much as his contre-jour technique that especially distinguishes his work on the street. Born in Amsterdam’s working-class Jordaan neighbourhood, he had a keen eye for the antics of the human subject, such as this street sweeper in Damstraat taking the Dutch reputation for tidiness to extremes. Shooting into the light means deciding on where the mid-tone should be placed; either in the shadow, in which case lights will blow out and ‘glow’, or better still, in the highlights, which means that shadow detail may be lost and the subject made a silhouette, except where there is sufficient reflection back into the shadows to keep some detail, as is the case here where the man’s face can be seen and the parking sign read.

There is a shadow-puppet drama at work in many of his images; they are not specific about who the subject is, but concentrate instead on what they are doing. 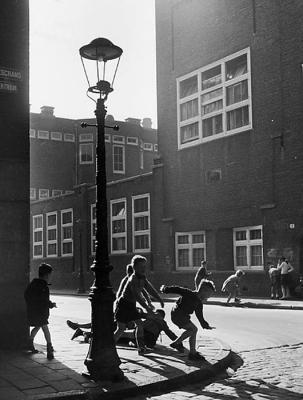 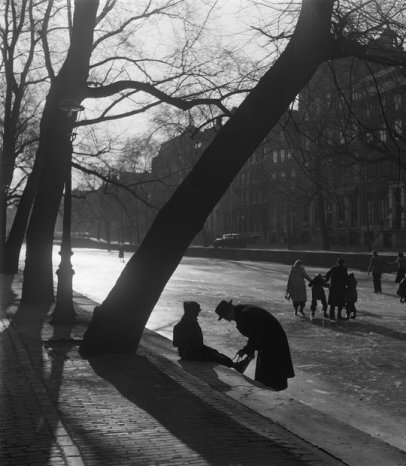 In later years he established a reputation as a travel photographer for weekly magazines like Margriet and Avenue, filing stories from Mexico, Spain, Portugal and Italy and from which he published an impressive series of photo books.

Certainly some of his pictures are set up in order to illustrate a certain story or newspaper article, or are anticipated, as above, but almost all retain a respect and sympathy for the human subject, bar some that are the product of a pre-feminist view of gender stereotypes.

Tragically on 18 October 1985, the day his book Zuiderzee, dood water, nieuw leven (Zuiderzee, Still Water, New Life) was launched, he suffered a stroke. Unable to speak, write or photograph, Scherer was admitted to hospital where he died eight years later.

In 1987, a group of friends set up Stichting FotoArchief Kees Scherer to publicise the photographer’s work, and they were successful in having it republished in the 1990s. 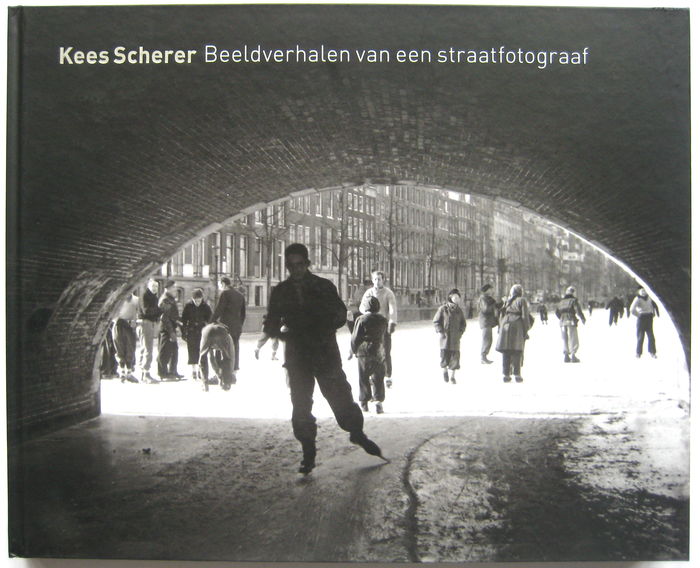 Krzysztof Jarzebinski’s Bunte Haut (Colourful Skin) is an exhibition that bears a sufficient relation to street photography to provide an informative contrast to the work of Martin and Scherer.

Everyday fashion shot on the street is a relatively new phenomenon; ‘street style’ has become a common feature in magazines and its practitioners have become well known, in particular Scott Schuman, aka ‘The Sartorialist’, Yvan Rodic, also known through his blog as ‘Face Hunter’, and Bill Cunningham whose street style photography has featured in The New York Times since 1978.

What they are after is typified in this shot by Australian Vogue editor and street style photographer Candice Lake; an example of contemporary ‘real life’ fashion, an outfit put together and worn by an attractive subject who is usually aware of why they are being photographed and may respond accordingly.

Jarzebinski’s strategy is to separate his subject from their clothes, but a trace of the street remains in the subject’s reaction to being naked before the camera, and the ‘pose’ of the clothing.

It is perfectly clear that both elements in these diptychs are shot in the studio. The placement of the clothes into a still-life is done by the model, and the pose of their body is also their own choice. Some just stand, while others perform a dance-like gesture.

Others still quite naturally react as if they were expected to be a fashion model…they are in a studio after all, a place that carries plenty of baggage regardless of how ‘neutral’ the backdrop may be!

Another natural reaction is to enter a play of wits, to assert some power or creative energy, as in the cases of artist Nuria Mora or Japanese actor Ikko Masuda.

To use a ‘detective camera’ like Paul Martin’s on the street now would be considered a dubious, if not unethical, activity (just consider Google Glass), and we are all easy prey for someone with a mobile phone camera. We prefer to be asked before we are photographed. The contemporary photographer seeks authenticity. It is time for the street photograph to be reconsidered, and in his own way with these direct confrontations of subject and camera, and perhaps with no direct intention of doing so, Krzysztof Jarzebinski offers one alternative perspective.