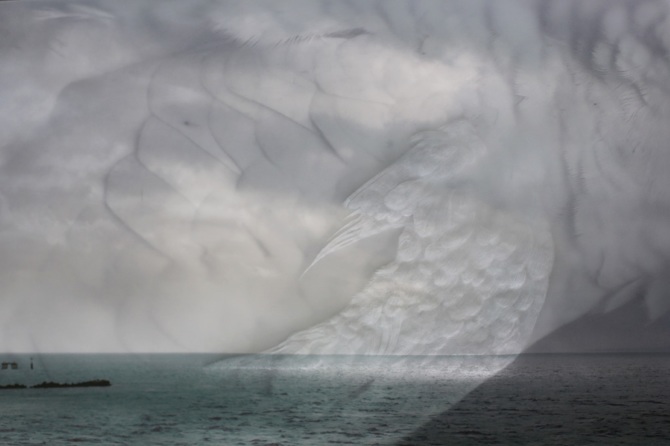 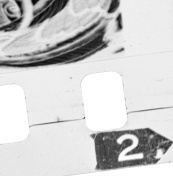 March 2: The verisimilitude of the photographic image presents itself as an illusion which tempts our sense of touch, and how often do we exploit the fact that the photographic print itself has tactile qualities?

Artists in shows opening today provide a range of approaches to those propositions.

Though he now is an active visual artist, represented in Copenhagen by inthegallery, his war experiences still haunt his work.

Typical for a war photographer, he is silent about atrocities and horrors in interview, and even confesses to having had fun photographing war stories, but he also admits to some frightening moments;

Once I was to photograph a morgue in Moscow. It almost looked like a giant garage, completely industrial with chains hanging from the ceiling, sunlight caught by the dust in the air. There sat a man who noted in a small brown notebook every time a new corpse arrived. We came in just as they were undertaking an autopsy – one of the bodies was about to get skin torn from the face and I stared directly into this white thing…I just could not photograph it.

His series Edge of Darkness, though photographed in the peaceful patchwork countryside of Denmark, reminds us of our psychological vulnerability to surveillance, the possibility of being watched or stalked, of the need for cover. It’s a natural reaction. Using his car headlights as a light source, he uses them to penetrate the darkness of the fields to discover the reflective eyes of sheep and deer staring back.

That this sense of danger is a state of mind is revealed in apparitions, just as the doppelgänger here, projected into sea mist by the twin headlights, is really his own shadow.

Long exposures, made in conditions where it is hard to see with the naked eye, are most often made with a hand-held camera, thus generating a nervous vibration and a sense of flight.

The series draws on some of his photography for Per Nyholm’s 2009 book Europæerne : reportager fra en rejse i Europas erindring (‘Europeans: a journey through memories of Europe’) that covers the countries of the European Union and asks what it is to be European and which celebrates the diversity of the Continent. 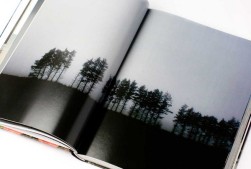 To photograph at night, alone, is a test of nerve. The environment however, is familiar. Ingemann lives in a tiny village in the Central Denmark region on the east coast, south of Aarhus and just five minutes drive from beautiful Horsens Fjord.

The darkness he photographs acts in his imagery as a presence, a curtain or shroud that is almost tangible, a protagonist playing a central role. He is an apt inclusion in this exhibition Chasing the Light.

Juliette-Andrea Elie is also preoccupied with landscape used deliberately as a counter to anthropocentrism.  Her earlier Fading Landscapes make this concern clear; they are composed of several layers of photographs printed on tracing paper, into which shapes have been delicately cut or embossed with a drypoint with a practiced hand;

My purpose is to make visible a world of contemplation where the outlines, in terms of space and time, are blurred and undefined – a world where you can see both the past and the future, what is and what could have been, what could possibly happen and what will never be.

Born in 1985, Elie’s confidence in a range of media derives from her training in art at Ecole Supérieure des Beaux-Arts in Nantes, France (DNSEP, 2010) and at the Concordia University in Montreal (Canada). 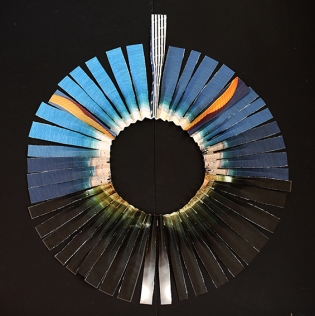 Her new series on view in Invisibles Mondes Visibles at Baudoin Lebon gallery, is the result of  year’s sojourn in Rio de Janeiro and its 32 km² mountainous urban forest the Foresta da Tijuca,  reclaimed from plantations. After reading the Manifesto Anthropophage (1928) composed by the poet Oswald de Andrade through his meeting with the anthropologist and philosopher Eduardo Viveiro de Castro, she resolved to return to the intimate relationship of man to his environment through reference to the indigenous aesthetic.

Prints of her photographs taken in the Foresta da Tijuca and amongst the high-rise buildings of Rio city are cut and fanned to replicate indigenous head-dresses which themselves are made of brightly coloured feathers, grasses and leaves. 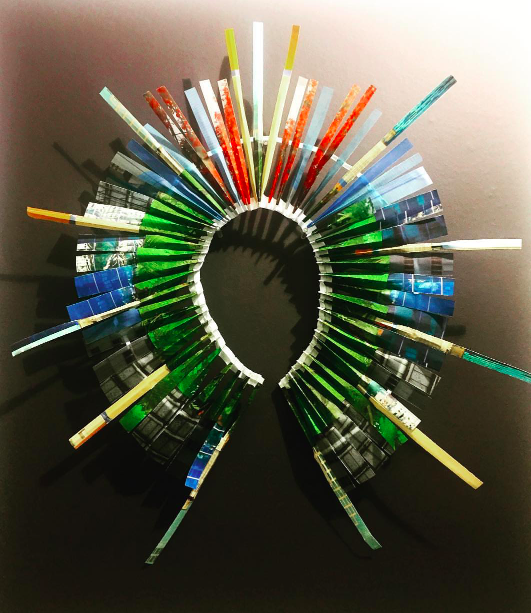 Between 1900 and 1967, an estimated 98 indigenous tribes were wiped out and despite lip-service protection enshrined in law, their cultures and lives are threatened by their increasing urbanisation as many are drawn to cities as their lands are usurped by mining and agricultural encroachment, dislocation, disenfranchisement, and by the highest inequality between rich and poor in the world.

Accordingly, Elie’s landscapes are sliced, scored, folded, glued and embossed. They can no longer be read as whole photographs but only as fragments that in some passages unite to form an horizon, or the skyline of the jungle. What look like natural patterns in the ‘feathers’ on close inspection are revealed to be the windows of high-rise apartments and office block skyscrapers. 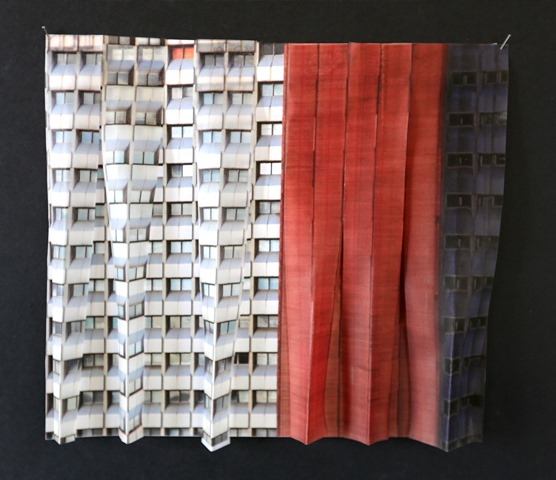 There is a haptic quality in all of Elie’s work, in common with the woodcarver, the draper and tailor, but also the printmaker and sculptor. Her photographs are treated as a substrate for further handling and modelling, so that the image of clouds may become plumage.

Carsten Ingemann’s fellow countryman Jacob Gils is included also in Chasing the Light. He  and Edgar Leciejewski at Künstlerhaus Bethanien, Berlin, share a fascination with the image in the round.

Gils represents a sense of rotation through long or repeated exposures of a central subject made as he physically moves around it, in a still-image rendition of the rotational tracking shot so often seen moving image advertising and in ‘bullet-time’ special effects in cinema pioneered by Tim Macmillan in his natural history photography.

He will also show work from the series Limit To Your Love, Polaroid transfers on watercolour paper. These joiners, a technique initiated by David Hockney and others in  entail some element of chance, says the artist, with overlaps not always entirely lining up and their mottled texture being a random effect of the transfer. The act of photographing or rephotographing the posturing women adds further obliqueness but also creates an interaction between the unique prints and the rendering of the pose, as if the sectioned image has to reach blindly for the subject, feeling around for it, as it were.

The ‘joiner’ approach was employed famously in shooting by David Hockey starting in the 1980s, but before him by Jan Dibbets, John Stezaker, Gordon Matta-Clark and Ed Ruscha in the 1970s. Gils’ is the print version, with few prior practitioners, though Gerald Incandela is certainly a worthy comparator with his painted developer and fixer on exposed silver gelatin  technique.

Gils’ Limit To Your Love series might be taken further to match the effectiveness and clarity of purpose of his landscape images.

A worthwhile example is Edgar Leciejewski’s A Circle Full of Ecstasy (detail, above left) which is a collection of 77 portraits of different politicians (e.g. original image of Daniel Ortega, above right) raising their right arms in greeting. These he appropriated from the media over the last 16 years, homogenising the black and white and colour images from different eras by printing them as cyanotypes to share the same blue hue, and covering the faces with a white circle.

They are assembled in sequence so that the figures in each appears to animate, to turn slightly from one image to the next; a similar rotation to that which Jacob Gils applies to elements of the landscape. The complete sequence thus shows a body apparently turning a full circle.

Leciejewski makes it evident that political elites of all persuasions, continents and histories all use this everyday gesture. Meant as a sign of greeting, in the special case of politicians it carries underlying messages. Not merely an acknowledgement of their perceived supremacy and success, it is also a symbol of power engendering the ecstasy of the title.

Even though it may appear to be an attempt to reach out to touch their subjects, Leciejewski’s rotation denies any potential contact, since the figure inevitably turns away. The representation of the hand so transparently transmitted by photography, is detached and negated as a symbol of touch, just as it was for King Midas.

One thought on “March 2: Touch”