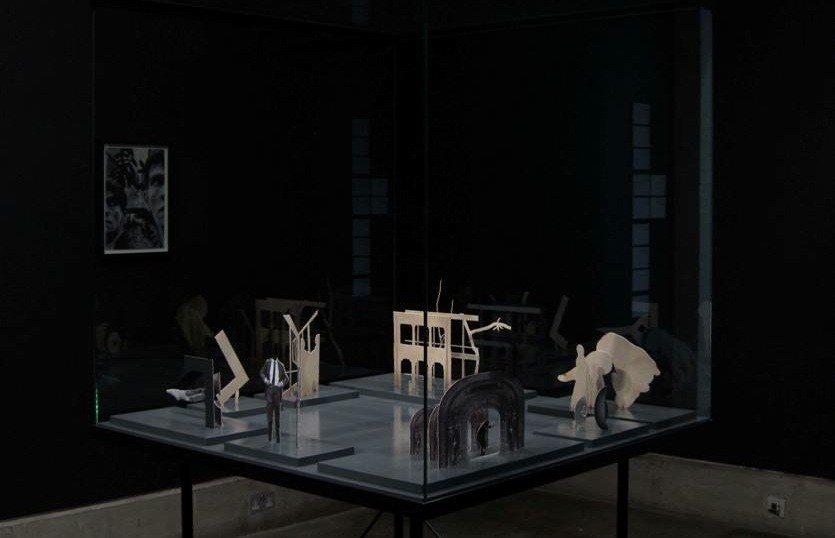 January 28: The photograph may be regarded as a box, an exhibit, or a museum vitrine.

In a sign of difficulties for artist organisations everywhere, in 2014, the ACUD MACHT NEU collective saved the space from bankruptcy, enabling interdisciplinary projects in art, music, performance and digital media in their Studio, Club and Gallery.

Jakob Kolding (born 1971 in Albertslund, Denmark) has exhibited extensively throughout Europe and the United States and this is the artist’s first solo show in Berlin. Best known for his hand made collages sampling art, architecture, literature, theatre, and music, he often remixes the same elements, re-contextualizing them for new meanings and narratives.

Kolding is also a writer with essays appearing regularly in the Berlin based magazine Starship . His interest there mirror his visual art; reinventing and (de)constructing meaning into texts that reflect on his favorite books, just as he draws on well-loved artistic imagery.

Early works reference a specific time and place contrasting urban planning with the actual use of space. New works are more open to broader interpretations and the collaged elements have become 3-dimensional as he installs arrangements of sculptural figures; life-sized wood cut-outs printed with black and white imagery. The settings invite viewers to walk amongst them.

Here is what could be a preview of the show at ACUD; sculptural figures with a selection of new small-scale collages.

A 2013 work entitled, literally, Making a Scene shows how he does just that by recalling historical dioramas which were originally miniature scenes in three dimensions with objects and figures placed in front of a painted background which were viewed through a peephole create the illusion of real depth.

In inviting people to look at, and often literally enter such a setting, the emphasis lies on the viewer and their imagination. Instead of being presented with an hermetic vision or illusion posing as fact, Kolding’s Dramatic Structures and other dioramas are open structures that invite only a certain amount of credence.

The show’s title takes two words, dislocated discolated, so similar that a double-take is required to determine that letters have been transposed, dislocated. ‘Discolate’, a made up word – to disco-late(?) – seems to hint that there is some fun, some joy. A writer as well as artist, his ungrammatical transposition is an intentional and apt textual summation of his process, which is to wench from other sources a photographic or graphic image, none of them his own, out of the comfort of the original contexts and into the company of each other. They also set up an unsettling deja-vu; we can expect to have seen them somewhere before. There they are enlarged to human dimensions so that the audience wandering between these ‘props’ becomes another actor in his scene; recall that his early interest was in the way urban planning is executed and then used in unintended ways, and one can see that politic working here.

Being mostly photographic, or realist if they are in another medium, we cannot but read his like-size black-and-white lambda prints, because the photographic rendering so powerfully suggests it, as three-dimensional. Here at his TEAM Gallery show last year he was provided with a dedicated space which could be viewed from outside, so that the forms inside presented themselves, in the muted light inside, as being ‘in the round’, with credible perspective recession.

Viewed from inside the illusion collapses, transparently scaffolded by, and openly displaying, the birch grain and the mechanics of the structural supports. They are reminiscent of the effect of viewing a stereoscopic pair in an old-style viewer; the scene looks three-dimensional, but each form in itself appears flat, lacking roundness, just like the theatrical item, a ‘flat’, the free-standing scenery, usually at the edge of the stage, framing the action. Here however, they are the action…the bending male figure stealthily or obsequiously enters stage left while the woman in the background gestures accusingly as she balances a skull in her hand. The coarse dot-screen obscures the detail of her face turning it too into a deaths-head. All is watched over by a hawk perched on a rocky outcrop. The is a ghost-train spookiness to the whole display.

This treatment questions the verisimilitude of the photographic image itself; to ask that if a carefully cut-out photograph within a photograph may fool the eye, then might not all the content of photographs just as easily be ‘flat’, of no substance?

Elodie Evers (who is the new curator of ACUD MACT NEU Gallery) identifies the collage Foreign Fish (2017) as exemplifying the concept of ‘dislocation’; “in it a couple of men stand inside Mies van der Rohe’s famous Seagram building and stare at a gigantic, colorful fish passing though the otherwise grim surroundings.” So colour, like this silk cloth concealing Bellini’s Ecstasy of Saint Teresa, is perhaps to be the new element in this exhibition that has found its way off the surface of Kolding’s two-dimensional works and over onto the floor pieces.

Olga Chernysheva’s Cactus Seller & Others (2009), at Diehl Gallery is also in the form of an installation; a conveyor-belt of black-and-white photographic light boxes mounted on a steel frame winding its way through the gallery space. 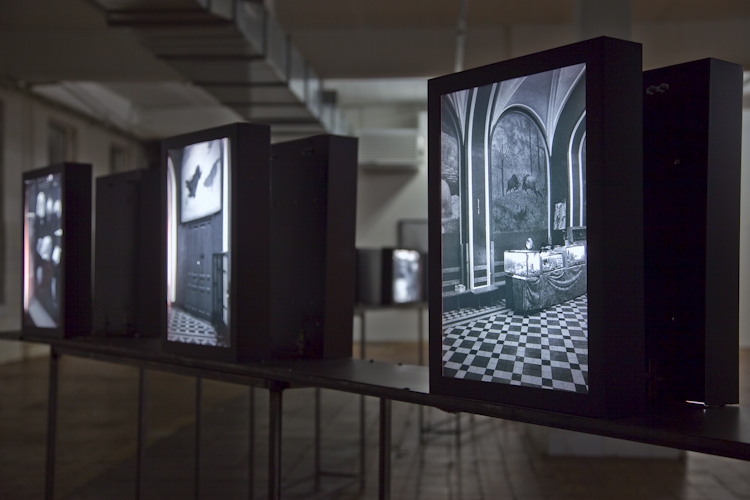 These pictures were taken in the Moscow Zoo Museum (which seems to have cleaned up its act since) and they contain a grim perspective on the changes that the museum has experienced from palatial pre-revolutionary origins to the functionalism of the communist era and subsequently minor neo-capitalist entrepreneurism in the form of stallholders who occupy the part of the space to eke out a living selling miniature cactus.

These men, all of retirement age, bend patiently to the task of tending to their marketable botanical specimens while all around them are the tired natural history displays and once-glorious murals.

These displays, and the cactus men, are all represented in the photographs contained in vitrines, like those that Kolding uses for his maquettes, making the human subjects also museum specimens. These glass cases echo the flatly illuminated fishtanks in which the old men keep their cacti. 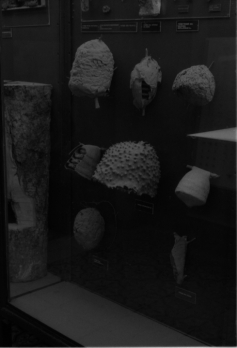 Thus the light box/vitrine presentation of Chernysheva’s project makes sense, at a humble, human scale, of the huge changes Russian society is undergoing, a vision which extends to her shots of the Museum’s ticket-seller and cloak-room attendant in their own booths, also ‘on-display’.