January 26: The gallery scene sets forth new exhibits after its dormancy over the inter-year period.

The Zeitenwanderer series continues his fascination with time which is, quite logically, manifested for him in photography, named the ‘time machine’ by so many others too in its history. Really it is more an obsession than mere fascination, one that has surely tried even his endurance and ingenuity, which are gargantuan.

He has an excellent website where you can find early projects which suffice to verify that , such as the series Park for which, for one year (01.04.1999-31.03.2000) he visited a park daily to take a photo at the same location every day, turning the camera on a fixed tripod about one degree each time. A full rotation yielded 360 photos which he digitally assembled into a panoramic landscape which condensed the changing of the seasons into one image. The shots taken over the span of a full year are interspersed with others in which he recorded the passage of a full day and night.

New Yorker Stephen Wilkes’ more loudly hyped Day to Night made from a fixed camera angle for up to 30 hours capture, by comparison, was begun only more recently in 2009. Admittedly excellent, his does not come from as long a concentration on the temporal aspect of photography.

Many photographers would relate to Masuyama’s excitement at having the digital medium available to him back in 2001 to enable such a project. My first purchase of a decent digital camera was a Nikon D100 (a 6Mp DSLR costing then a mere $A7,000.00) in 2001, the year Masuyama completed the Park project, and I too excitedly montaged images from it, in my case rotating the camera more quickly to encompass a journey from one country station to another in images like this one, much the inferior to Hiroyuki’s.

Hiroyuki Masuyama, born in Tsukuba, Japan, on July 28 1968, studied oil painting at the Academy of Fine Arts and Music in Tokyo from 1987 to 1991, then till 1993 he studied mural painting with Professor Yoshiaki Watanabe. He held a DAAD scholarship holder at the Kunstakademie Düsseldorf 1995 to 1999, then from 1999 to 2001 he studied media art at the Kunsthochschule für Medien in Cologne.

Since then he has lived and worked in Düsseldorf, occasionally travelling back home to Japan. Zeitenwanderer reflects the artist’s need to travel, driven by a desire to return to his family as often as possible, having lived for 20 years in Germany as a foreigner. It also benefits from his training as a painter. In German Romantic Caspar David Friedrich he found a kindred soul, a wanderer, and visited the places Friedrich painted, photographing in the same season with the same weather.

From 300-500 photographs of each site he composed a montage just as in his studio Friedrich combined the various drawings he used to make his landscapes, few of which represent an identifiable place in particular.

A hundred and ninety years span the gap between the works of Caspar David Friedrich and Hiroyuki Masuyama, and that is represented in the change, not in the landscape, but in the tiny human figures within it who observe it; in Masuyama’s version of Landschaft auf Rügen mit Regenbogen, this is being done with a mobile phone. His feat in recreating the painter’s work in photomontage is marvellous, if rather quixotic. 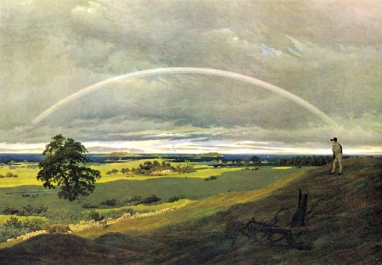 After Caspar David Friedrich, he turned to the English painter Joseph Mallord William Turner (1775/1851), also a travelling painter, who completed the Grand Tour several times, between 1802 and 1844. Hiroyuki followed in Turner’s steps from London to Venice to make works which are less exact copies but which are made in the same Romantic spirit of wanderlust and an admiration for the sublime forces of time, weather and geology.

Before one can dismiss Hiroyuki Masuyama as a copyist, a sort of Richard Estes in reverse, a work like his work ‘O’ knocks the breath out of such a response; a sphere 260cms in diameter, it is made from over 4,000 fragments of timber. On climbing into this work the viewer can see the night sky from the North Pole to the South Pole because in to the ball have been inserted 30,000 optical fibres set out in an accurate stellar map. It is a personal planetarium, infinity experienced in a small space. The different diameters of the optical fibres (0.2mm to 2mm) reproduce the individual intensities of the stars.

Masuyama’s work is Romantic and idealist in spirited if that is not to your taste there are other offerings in the new season of shows at the Centre for Contemporary Photography, 404 George Street, Fitzroy, Australia.

James Tunks’ new series of works opened last night with other shows at the CCP. His Elsewhere series have the appearance of Masuyama’s miniature planetarium, but it is a deception, an ‘indirect’ depiction, he would say. Instead of photographing stars themselves, Tunks photographs shattered and crushed material, including a pulverized 35mm Minolta wide angle lens, to simulate the heavens.

Born in Australia in 1988 James Tunks currently lives and works in Frankfurt am Main, Germany where he is studying at Staatliche Hochschule für Bildende Künste under the supervision of Prof. Douglas Gordon. He ranges through a variety of media in his exhibitions, which are usually installations, though he is clearly interested in its illusionistic and deceptive aspects, and this, and the medium’s temporal attributes have long been the subject of the much older (b.1944) Alain Fleischer’s career. CCP have given over their projection window to his L’homme dans les draps.

It is a video piece in which brings to life the uncanny propensity of fabric in light and shadow to transform into beings which scare little children. Shadow play might feasibly be considered the most primitive form of photo-photography.

I remember being the sole visitor to his exhibition one day in 2008 at Singapore Art Gallery  during the International Symposium on Electronic Art 25 July – 3 August. I marvelled at the several rooms filled with his novel reinventions of the medium. Some investigated the photograph’s relationship with the mirror and voyeurism, such as this one in which he undertakes the oblique exercise of recording a wind-up ‘Happy Days’ toy, a little tin boy on a bike, dragging a mirror across a tiled floor, as the long exposure registered the reflection of a wall projection of Velasquez’s Rokeby Venus (c. 1647–51). The Old Master painting seems to manifest as a hovering, vibrating form, outlined at one point by the yellow string attached to the mirror.

Fleischer’s enduring journey in film photography deserves to be paid more attention for his explorations by younger generations of photographers now wandering amongst the marvels of the digital medium.