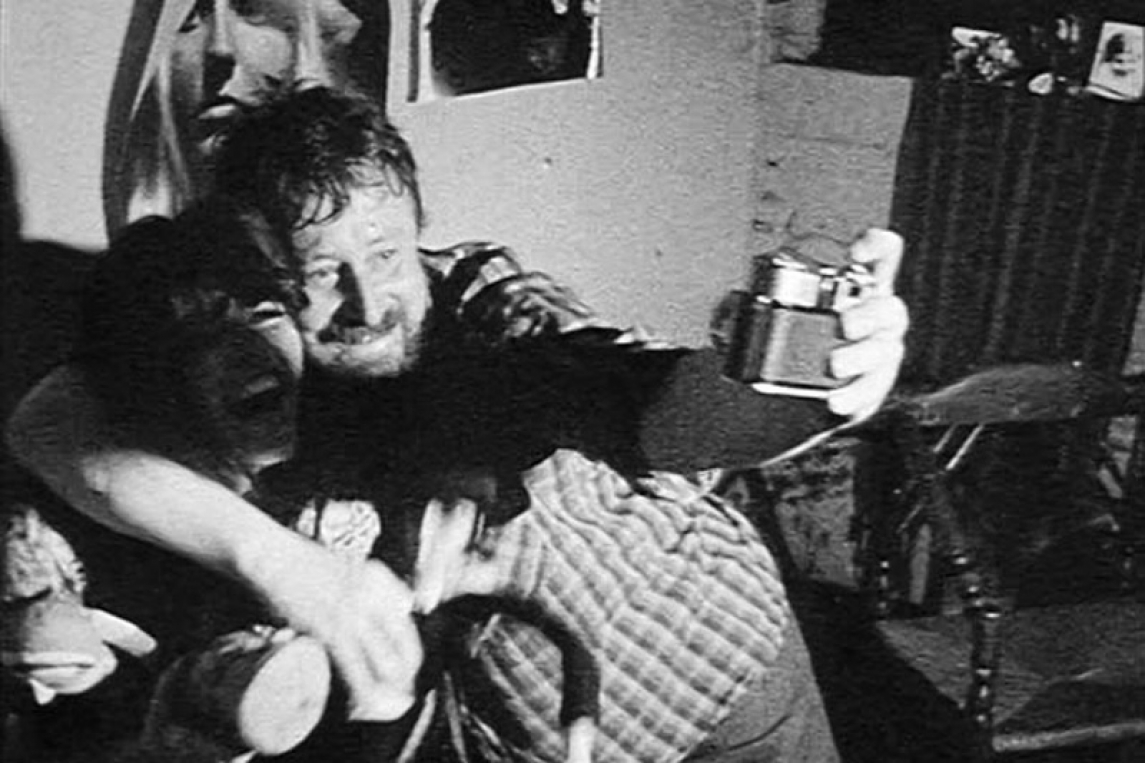 January 19: Photography is put to eccentric uses by unusual people. It entices both voyeur and exhibitionist.

One is Gerard P. Fieret was born on this date in 1924 and died January 22, 2009, in The Hague in the Netherlands, who subverted the conventions of photography in works he produced in Europe in the 1960s and 1970s.

Another is German photographer, Martin Pudenz, born 25 October 1948 in Arnsberg, Germany, whose show seamed stockings is the wrong answer opens tonight at 7:00pm and runs to March 11 2017 at Galerie Hiltawsky at Tucholskystraße 41, 10117 Berlin. 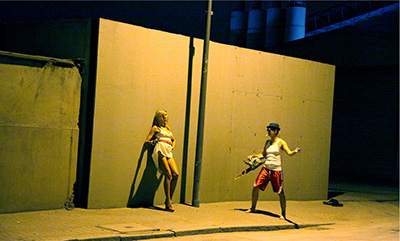 A freelance photo artist who lives and works in Frankfurt am Main, Pudenz attracted attention for his revival of the rare and perverse traditional bromoil print; part painting, part photography.

In this process, a silver bromide photograph is bleached, and water is allowed to permeate the gelatin layer. The originally bright areas, on which there was less silver, attract more water. After removing the water drops on the surface, the damp paper is coated with one or more oil colors which then adhere wherever there is reduced water content on the parts which were originally dark or grey. This makes the image visible again.

The results, beloved of the early twentieth-century adherents of the international Photo-Pictorialist movement, are particularly picturesque with soft tonal values. Bromoil enables the sharpness of contours to be maintained or reduced. By working on the positive itself, every photograph becomes unique.

Martin Pudenz has developed and refined the process for images of landscape, architecture and still life, and his experimental photographs and staged portraits. His most recent works are partly in digital media – negatives created from digital files for contact printing in bromoil. The show will include his classic images and new work, though the gallery website shows only one.

In 1965, Pudenz graduated from the Oberschule der Praktisches Zweig in Berlin and from 1966 to 1968 he undertook a photography degree, working as a theatre photographer, portrait photographer and reporter until 1977 when he studied visual communication at the Gesamtherzochschule, Kassel.

Pudenz undertakes the “whole realisation, from the flash of inspiration…”, as Natias Neutert puts it in his foreword Dompteur des flüchtigen Augenblicks (Tamer of the fleeting moment) to Martin Pudenz: Selbst. Umschau/Braus Verlag, Heidelberg 1999, “…to the performance itself as props and costume designer, lighting as well as being the director and actor in one person – and by using a cable-release also becomes the photographer of the whole thing”. In his images he plays the jester, the Charlie Chaplin clown, who is the butt of his own jokes, and  the plaything of the women who join him in exposing the silliness of human sexual attraction. 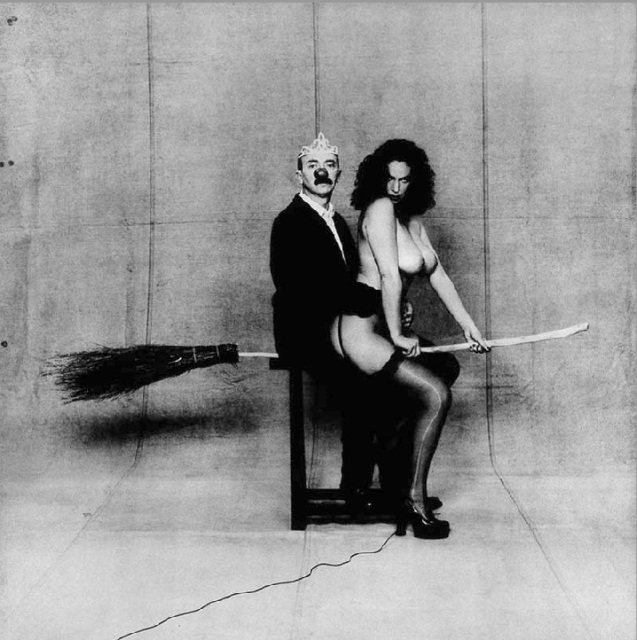 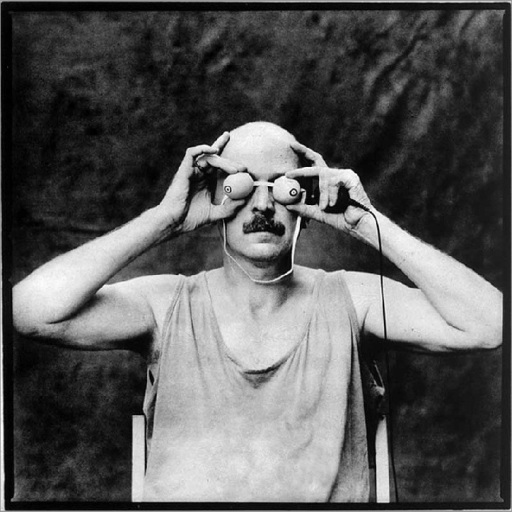 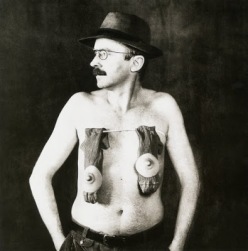 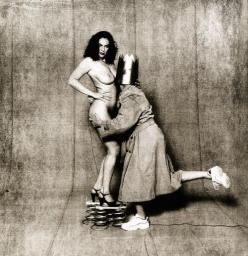 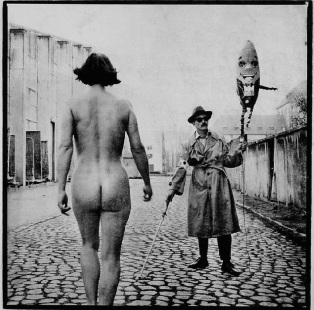 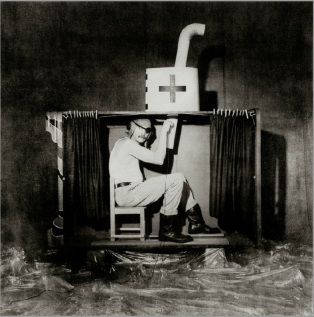 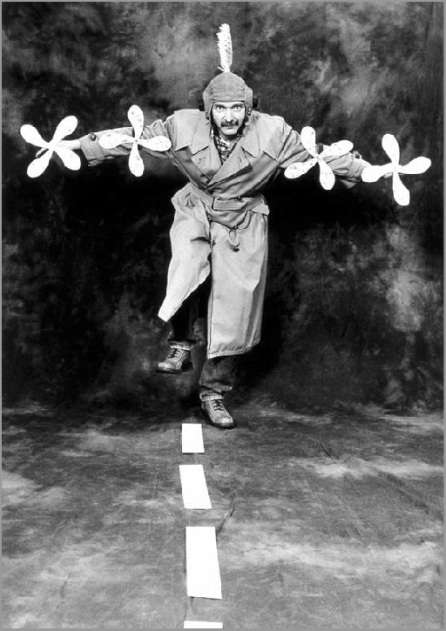 Such an approach is used in portraits too, of Gottfried John , Götz George , Joschka Fischer or Nobel Prize winner Christiane Nüsslein-Volhard.In And there you go Pudenz, with the simplest of improvised props, imagines Anthony Quinn’s fantasy trip by horse and carriage…

“Photographs are only the shooting stars of reality, but when one conjures a sparkle in the eye of the beholder, the work is done,” says Martin Pudenz.

Even his landscapes prompt a chuckle as the geology competes with the sky, tilts about or appears to have plumped randomly onto the ground 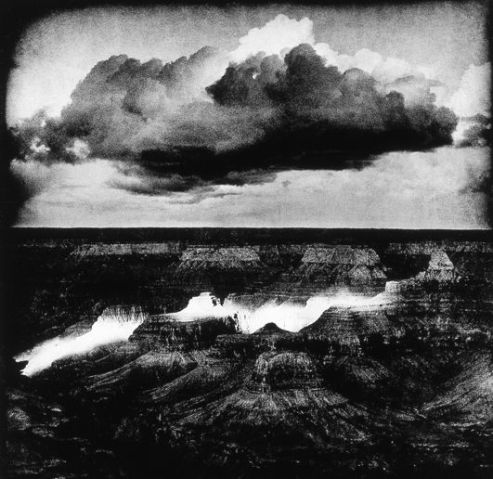 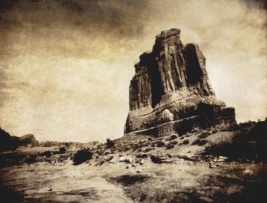 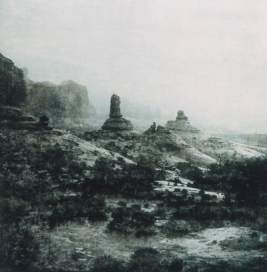 Gerard Petrus Fieret was born on this date in 1924 and died January 22, 2009, in The Hague in the Netherlands. Abandoned by his parents to foster care at age two, then to an orphanage, he suffered sexual abuse throughout his childhood. He received art training at the Royal Academy of Art in the periods immediately before and after the Second World War, but being half Jewish, during the War he was interred in forced labour camps. Eventually he had studied drawing, painting and graphic design.

Photography was his primary vocation from the late ’50s to around 1980. Between 1965, the year he acquired his first camera (a Praktiflex) and the end of the 1970s, he was an obsessional and insatiable photographer, taking pictures of anything and everything: children, shop windows, street scenes, animals and himself, and women, lots of women – models, students, young mothers, dancers, strangers, an when they permitted it he photographed their breasts, buttocks, legs, necks and other body parts.

Despite his ceaseless production of drawings and poetry, it is the thousands of photographs that Fieret produced between 1960 and 1980 that are extraordinary. 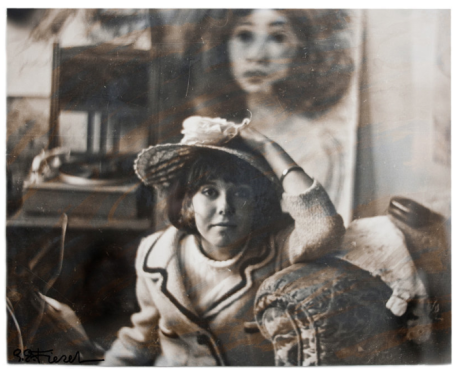 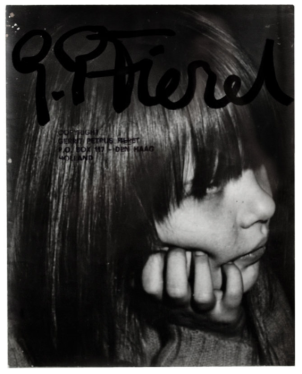 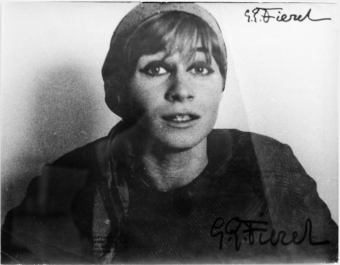 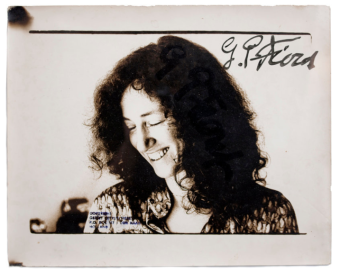 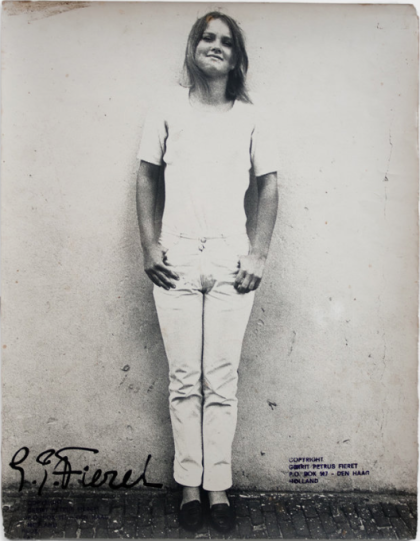 The women he photographed during casual encounters either candidly, or posed in intimate proximity.

candid though they are, there is a gentleness and authenticity about Fieret’s images which is at odds with the brutality of his processing and treatment of negatives and prints which, because of his paranoia- he thought others were stealing his ideas and style – were compulsively signed in marker pen and stamped ‘Copyright’ by their author. 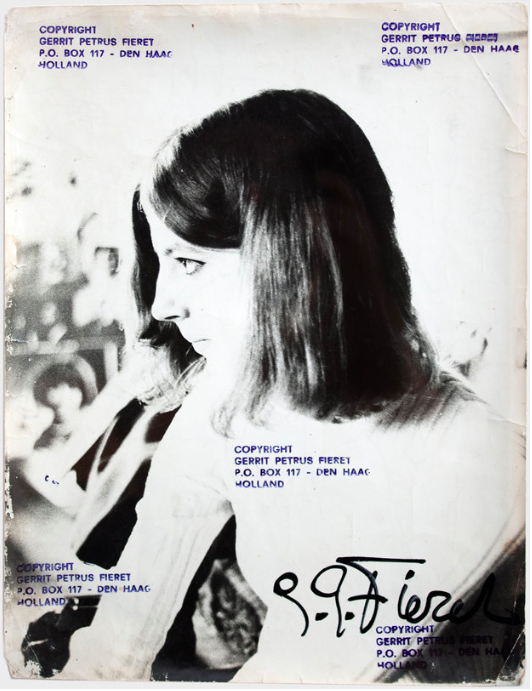 He always took black and white photos, often enlarged to his favourite 60 x 80 cm (20 x 24) format, an unusually large size for 35mm. They were made using chemicals and out-of-date photographic paper, and his processing was unconventional to say the least; in an effort to dry his prints he might burn them with a candle. Prints were deliberately exposed to the wear and tear of everyday life and covered in dust, footprints, scratches, mouse droppings and pigeon shit that would adhere to the surface. 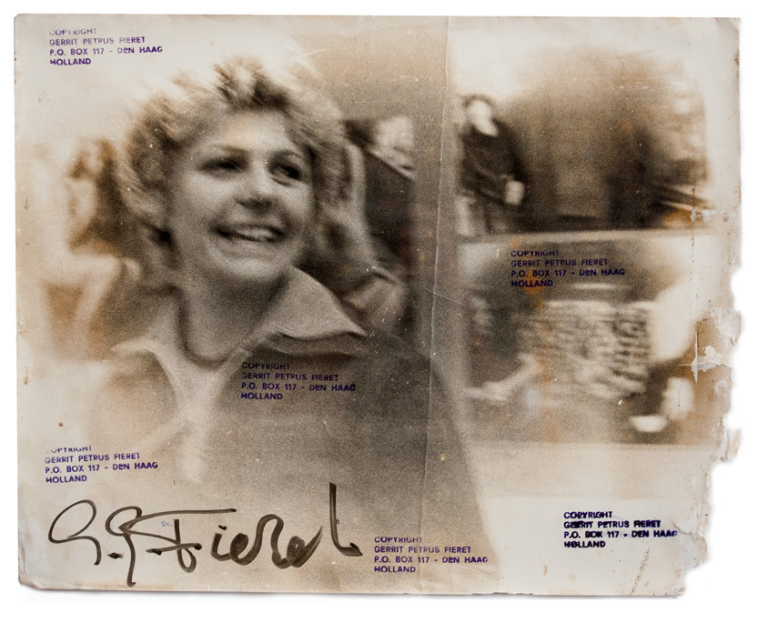 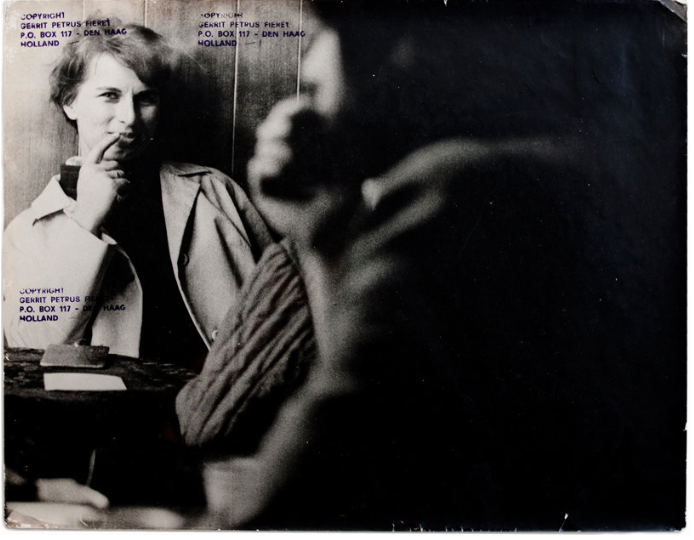 For many years Fieret was a familiar sight on the streets of The Hague. Winning the prestigious Ouborg Prize in The Hague in 1992, a total of 4000 Euros, he took it straight to the local pet shop and exchanged it for two years’ worth of birdseed, which he distributed, daily and compulsively, every day on his bike, dangling with two buckets of birdseed from the handlebars as he did the rounds of some thirty places where he fed his beloved pigeons. Few passersby were aware that the ubiquitous figure was an artist, let alone one whose work is now sought by auction houses in Europe and America.

Frank van den Engel’s documentary Photo & Copyright G.P. Fieret,  follows the artist as this very same long-bearded, white-haired character who cycles around the streets of The Hague feeding pigeons. These were his last days, before he died aged 85. Fieret admits he spends nights upright in an armchair, in a dump he shares with pigeons and rats, ankle-deep in photographs that are shredded, soiled, stuck together, that “I’m desperate. I’m trapped in all this chaos and decay… I’m decomposing.” 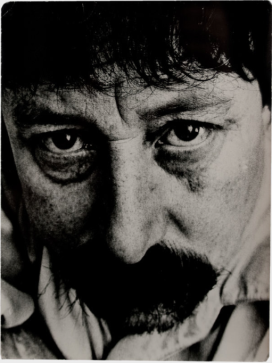 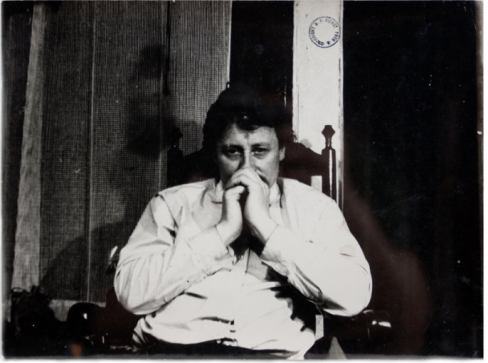 Fieret and Tichý both never set foot outside their immediate neighbourhood, they led virtually homeless existences, and were eccentric, but there the similarity ends. Fieret did not approach his subjects by stealth. “What I aim at with my photography is anarchy: in the context of a conservative society, my photographs are aggressive, intensely alive, passionate – a healthy passion for life – that is what they are about,” he wrote. 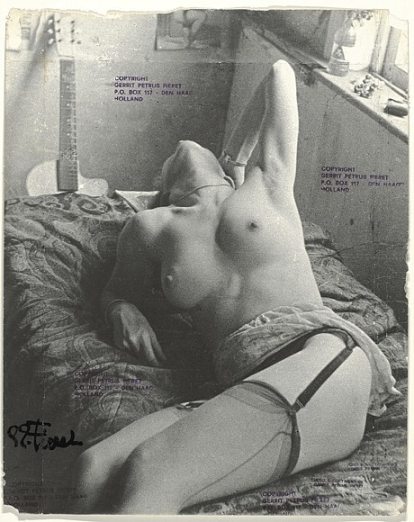 Gerard Fieret (circa 1970) untitled (Courtesy of the Rijksmuseum) 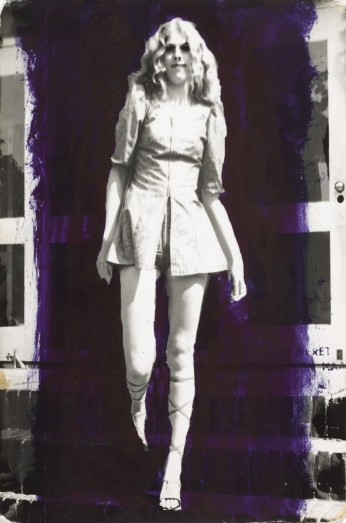 Transgressive and unconventional, his disfiguration of the photograph was part of a  search for “something supernatural, a sense of the eternal”.

Interest in Fieret’s work is mounting. The most recent solo show of his work was last year, 26 May 2016 – 28 August 2016 at Le Bal gallery, 6, Impasse de la Défense 75018 Paris. The next is Gerard Petrus Fieret: There are no failed photographs at Fotomuseum den Haag (The Hague Museum of Photography) Stadhouderslaan 43, 2517 HV The Hague 20 May to 10 September 2017. Also look out for a major show in Paris slated for this year.