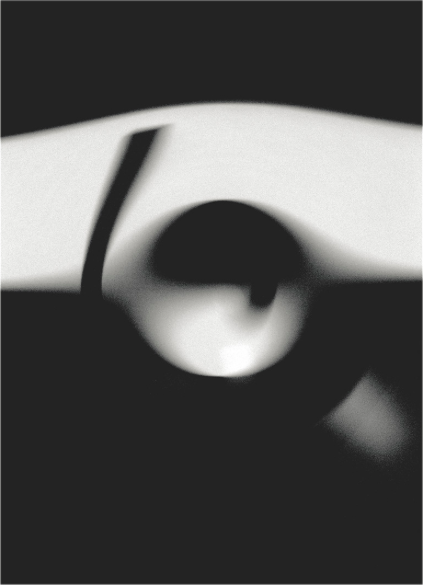 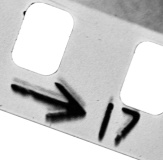 January 17: Burkhard Arnold in focus Galerie in Cologne, Gemany opens a group show today Light, Shadow and Chemistry devoted to the photogram, lumigram and chemigram, all means of making a camera-less photograph, and devices that question the nature of photography.

The photogram is a method of making photographs that uses an effect noticed by Jabyn ibn Hayyan in the 8th century; that silver nitrate is darkened by light, an attribute employed to make impermanent images on leather by Humphrey Davey and Thomas Wedgewood (who could not fix the results), and since then by Niecephore Niepce, before he was able to develop an emulsion able to record images projected by a lens, to make permanent images directly onto his sensitised bitumen plates from engravings on paper made transparent by oiling them.

Like the ceramic manufacturer Wedgewood, who was seeking means of speeding up his manufacture of bas-reliefs on his famous pottery, Anna Atkins also had a practical purpose when she contacted printed the shadows of British seaweeds onto paper with the beautiful cyanotype blue print process.

The creative potential of the photogram has been realised and rediscovered over and over by countless photographers since, the most famous of whom of course are Lucia Moholy and Laszlo Moholy-Nagy, Man Ray (the ‘rayogram’) and Christian Schad (the ‘Schadograph’).

A contemporary of Gottfried Jäger, Luigi Veronesi (28 May 1908 – 25 February 1998) was an Italian photographer, painter, scenographer and film director born in Milan, the photogram was a part of his varied practice.

An early example from 1936 shows him using the procedures used by the Moholy partners in making such images starting in 1922; here by placing three-dimensional objects on the surface of the paper, Veronesi’s being prices of thin perspex, one a T shape and the other an L shape. They are joined on this surface by what appear to be a dot-screened piece of film or fine wire mesh held down by a transparent oval glass object which has moved slightly during the exposure, casting a doubled image, and a coil of paper.

Light from the enlarger lens, set at a small aperture to produce a point source of light illuminates these forms in the darkroom. The photographic paper on which they sit has been slightly offset so that their shadows project to the lower right as we view this image. A reflection bounces from the perspex T, darkening the paper and forming a ghostly V shape at the top right. The ground is smudged and not entirely black indicating perhaps that the paper was not fully developed before it was snatched from the developer and thrown into the stop-bath to ‘freeze’ its development. Such is the often experimental and contingent nature of the photogram game! 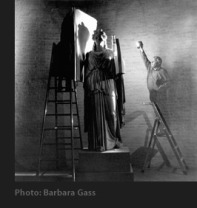 Floris Neusüss, b. 1937 in Germany is amongst the vanguard of those devoted to experimental use of the photogram technique. He began as a painter before turning to photography and his series Körperfotogramme (whole-body photograms) that set him in the 1960s on a lifelong exploration of conceptual, technical and artistic possibilities of camera-less photography. Körperfotogramme depict nudes à la Franz Kline, but also life-size portraits and shadowy reproductions of museum sculptures.  On show are examples of his novel Nachtbilder – or, night pictures – (1980s/90s) produced by placing photo paper emulsion side down into a woodland or garden at night during a thunderstorm, according to the gallery, during which it might be tumbled about by the wind.

In the example above, lightning flashes have exposed impressions of plant life onto the paper remarkably sharply though haphazardly. The image appears to be both negative and positive, an effect that might be achieved in the darkroom later through solarisation (partial reversal through secondary exposure to light), though extreme overexposure has been known to spontaneously reverse the photographic image.  Alternatively, the paper might be partially coated with developer before being exposed to the elements. This series was exhibitited in the Rheinisches Landesmuseum, Bonn in 1997 and are published in the book Nachtstücke 1997. 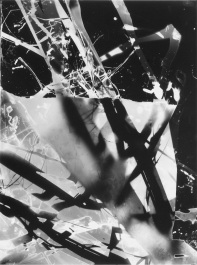 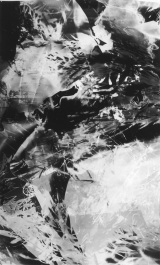 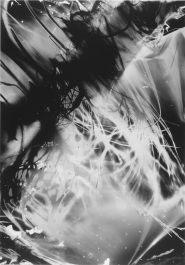 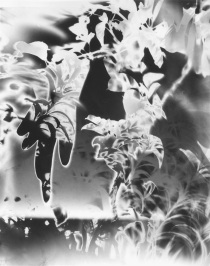 Karl Martin Holzhäuser, b. 1944 in Germany, champions ‘Concrete Photography’ in his Lichtmalerei (painting with light), a manifestation of ‘generative’ photography which executes the idea of artistic constructivism extended to a programming of apparative systems (simply; enlargers, darkroom exposure times, emulsions and processing, in the case of the photogram). Implementing these ideas completely in the dark, Holzhäuser works following a predevised “score” of the movement of light from memory, permitting himself  occasional spontaneous adjustments, and titling the works with the date of making.

The ‘score’ can be read back from the image; superimposed strips are generated with systematic stencils and masking, exposed with coloured light sources gradually scanned over the paper at a pre-determined rate.

Gottfried Jäger, b. 1937 in Germany also aims to produce a “photograph of photography,”  adapting the photogram process to theorist and philosopher Vilém Flusser’s notion that “freedom is to play against the apparatus”. In 1968, Gottfried Jäger introduced the concept of generative photography as a title for an exhibition of the Bielefeld Kunsthaus.

His The Image disappearing behind itself, 2010 provides an explanatory (‘concrete’) example of his procedures.

Another founder of Concrete Photography is Pierre Cordier (b. 1933), a Belgian artist who  pioneered the chemigram in 1956 as a means of artistic expression and who at 84 is the oldest of the artists in this group show.

The chemigram combines painting in varnish, wax, oil or other substances with the chemistry of photography (photosensitive emulsion, developer, fixer) in full daylight. The chemistry may be coated by hand with brush, paint roller, spray; or it may be applied mechanically with a silkscreen or other stencil processes.

Cordier resided in the south of France from 1992 to 2007, gathering material for the publication of a monograph which synthesizes fifty years of research. Since its publication in 2007, the Centre Pompidou in Paris and the Victoria & Albert Museum in London have each acquired his chemigrams for their collections.

His ‘luminograms’ and photograms were originally made with stencils, perforated computer cards (if you remember them?) or punch waste exposed to a light source on a photosensitive emulsion in such a way that they are reduced to a geometrical, apparently mechanical structure.

However, to contemplate his more recent work such as the example on the left is to be left aghast, wondering how he has executed it without a camera. It is a masterwork of non-objective photography, beautiful for its impossibility. of all the artists in the show, Humbert’s work is honest and authentic, the result of long experience, patience and perseverance.

Today Humbert has moved to digital, but all of his earlier works earlier works, all analog, now housed in the Fotostiftung Schweiz.

Probably the youngest of the exhibitors, Wendy Paton (USA) makes her photographs on film or direct onto photographic paper in the darkroom. Photograms:Literary (2016), extracts of  which are seen in this show, are unique selenium toned gelatin silver photograms and they constitute a narrative (as is appropriate) around the book, which can be seen in its entirety on her website.

Her technique harks back to Veronesi’s; the subject (in every case a book) is placed standing upright on its edge on the photographic paper then is exposed to the pinpoint light from the enlarger lens. Light flows around the open pages of the books pivoting about the points of contact which remain pure white in these one-off ‘negative’ photogram images (i.e. black is light), spreading, blurring and fading as the surfaces of the paper reflect, and focus diminishing with the distance that each point of these tall forms stands from the paper.

The books in this series seem to take flight, flapping across midnight black, delivering their tales into our hands which are manifested in a series of gatefold cutouts hinting at text and illustration, before the books multiply, flock together, and once more take flight. Though some of the series is repetitive that would suit the larger display intended. It is an engaging idea which is the most overtly poetic of the offerings in the show, quite appropriate in a photographer who is also a racehorse trainer and used to the joy of animal flight.

Jack Sal (born 1954 in USA) is a widely exhibited and celebrated artist in installation, drawing, and photography. Clearly it is the mark-making potential and physicality of the paper-based photogram that is most attractive alongside his work in drawing and installation, and his photogram on the gallery website would seem to be the most straightforward; a found printed text on paper on which crosses have been painted is printed onto photographic paper.

In other works he uses printing-out paper in his installations which will chemically intensify and thus act as a measure of light and temporal change over the duration of the installations. He employs the cliché-verre, hand-drawn in many instances, as the negative to be imprinted on the printing-out paper which does not require development.

The technique was used by artists of the Barbizon school, Corot, Millet, Daubigny and others as an adjunct to drawing, akin to printmaking as a kind of reproducible monoprint technique. They made a hand made negative on a piece of glass (quite often, uncoated photographic glass as an expedient), blackened it with smoke from a candle of oil lamp, and drew images in the soot-covered surface with a sharp pointed instrument. Then they would place the glass over a sheet of photographic paper and expose it to light. Because they were working in negative (the cleared glass would be black) it brought welcome chance effects (Abelardo Morell experimented with the technique in 2009).

Hans-Dieter Fronz has called Esther Hagenmaier’s photo-based work ‘Concrete Art with a telephone connection to reality’. Her photograms are intentionally trompe l’oeil, made strongly three-dimensional by virtue of their folding forms and flat greyscale tonality which reduces the spatial clues. In exposing her photograms the triangular stencils she uses must be perfectly aligned to prevent the creation of joints, which cannot be detected until the print is developed. The images have irregular, cutout shapes.

There is a consistency between the photograms, her lens-based imagery, room installations, objects and architectural interventions she makes, as all share this irregular hard-edge geometry. 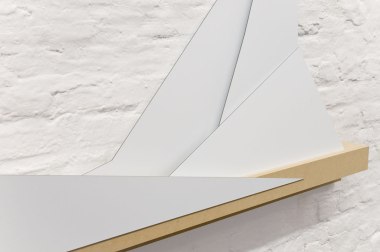 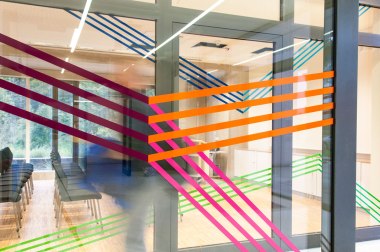 Born in 1975 in Germany Hagenmaier studied from 1999-2006 free art at the HBKsaar, Saarbrücken and then as a master student of Sigurd Rompza whose work has also an architectural basis. Despite the fact that she has been artistically active for only a few years, since 2006 Hagenmaier has shown widely.

Light, Shadow and Chemistry draws together diverse Modern and contemporary uses of the photogram which demonstrate that it is still vital in a digital age in dealing with the conceptual subtleties and potentials of the photographic medium. The fact that it includes several of the major contributors to the Concrete Photography manifested especially in ‘generative’ photography reflects a striving for philosophical clarification through practice that has formed the practice of those artists.