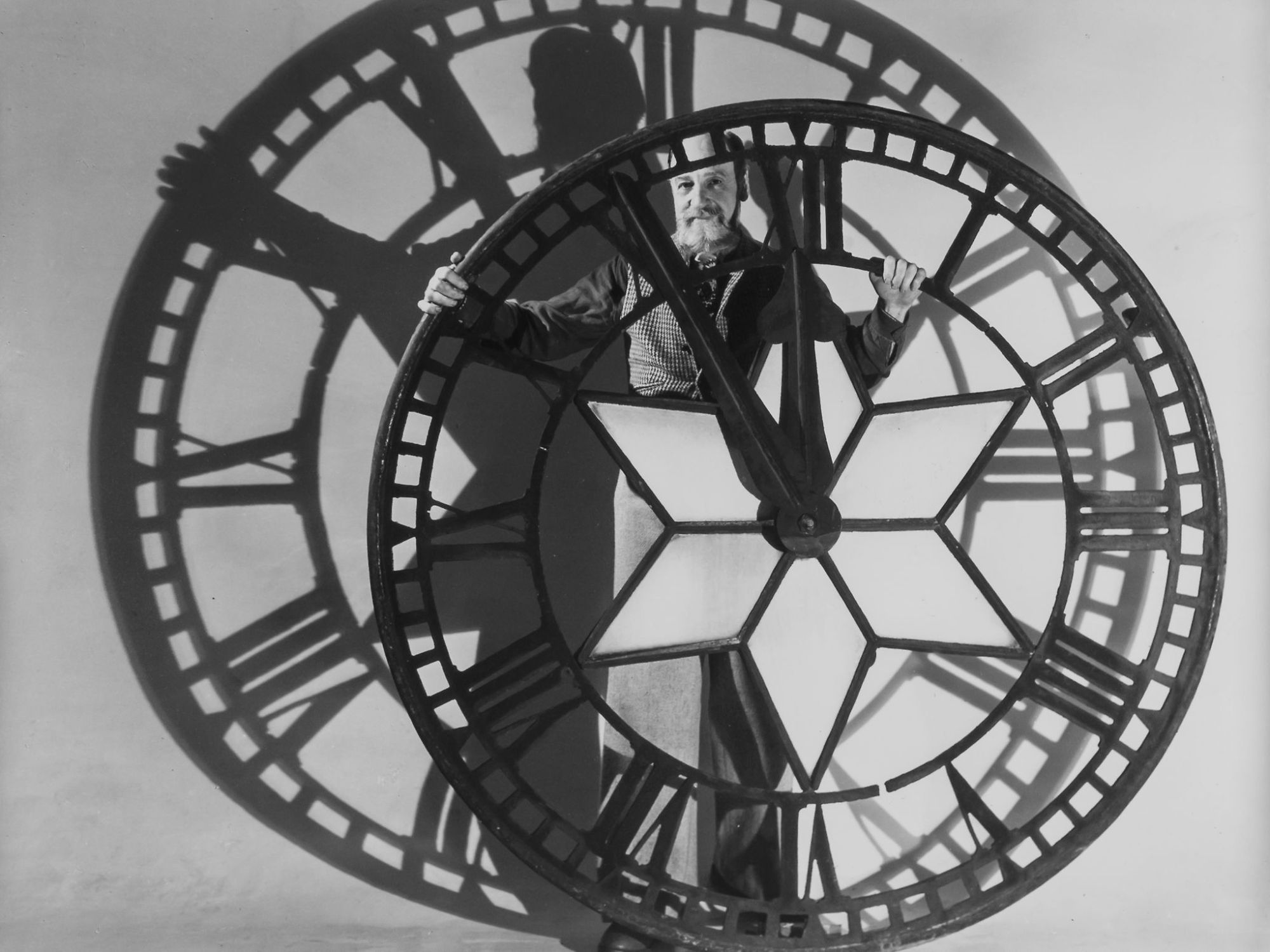 December 25: In the last few weeks (or days) photographers around the world have turned their thoughts to using their talents to send seasonal greetings to friends, and clients (if you’re lucky, they can be the same people).

The cards of Angus McBean (1904 – 1990), theatre photographer , stand out as being some of the most creative, and surreal.

He made his first card in 1936 and continued the practice, with only the occasional break, until his last Christmas in 1989. Treasured by the recipients, in recent years McBean’s cards have been appearing at auction houses where they attract competitive bidding.

All year long McBean would dream up bizarre ideas for portraits of the actors in the West Endand creating vignettes that encapsulated the theme or narrative elements of each play to attract audiences to productions in the West End and at the Old Vic, Sadler’s Wells Theatre, Covent Garden, and the Royal Shakespeare Company from the 1930s up until the rise of ‘kitchen sink’ drama in the late 1950s, which demanded more gritty pictorial realism.

Originally a theatrical set builder and mask-maker in the age when decorative masks were all the rage, he started in photography when he took pictures of Vivien Leigh and Laurence Olivier commissioned by Motley Theatre Design Group.

Early on he established himself as the regular supplier of theatre portraits for publication in the weekly newspaper The Sketch for which he a produced a series of ever more surreal portraits of elaborately dressed actors in absurd environments.

Known as ‘one-shot’ McBean, he and his assistants were able to make production photographs in minutes by preparing the sets in advance, constructing them of plaster, sand and cardboard in the pocket-handkerchief studio, so that the actors had simply to slip into place. Rex Harrison, Diana Wynyard and Anton Walbrook for example, in the shot above, are lying on the floor of the studio with an architect’s blueprint, slashed open with a significant triangle cutout, laid over them (there’s a cute inclusion of McBean’s byline; a T square inscribed Angus McBean, Form 1…a product of his school woodwork class!).

He photographed everyone who was anyone, as his studio visitors’ book, which recently sold for £11,000, shows. 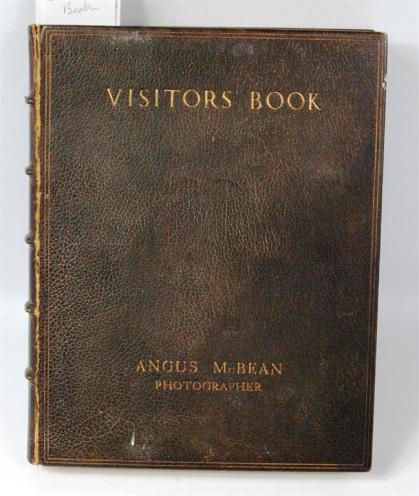 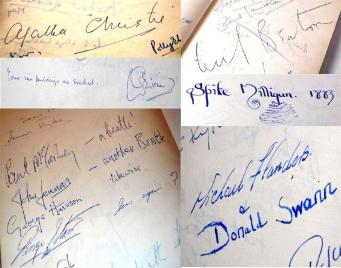 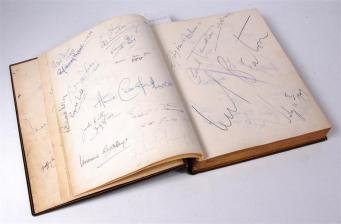 A publicity photograph in McBean’s studio was on the list in every producer’s schedule. His last assistant, the photographer Mike Owen, who worked with McBean in the 1980’s remembers that;

He used to build his own sets, paint and retouch his own pictures. Before I worked with him he never used a light meter or a Polaroid – he did it all by eye. I’d fix up the lights – four or five lamps for each portrait, casting shadows on the background. He would use his hands for shading to bring out the highlights. Ninety percent of the time he did it all in camera.’

Remarkably McBean was born on the same day as Salvador Dali, who made of  his Surrealism a veritable cult, a lifestyle, right down to his moustache and pet anteater. McBean, on the other hand said he valued surrealism ‘for its fun value’; he titles his Christmas card of 1952 ‘Jeux de Photos’ (Games of Photography).

It is in his Christmas cards that his sense of fun is given its head. Most are delightfully ridiculous; proving that most surrealism, from such a perspective, becomes funny rather than weird.

McBean revelled in the opportunity to make Christmas cards that gave full rein to his extraordinary abilities in set building and lighting, as he appears dressed in pyjamas and holding an umbrella, submerged at the bottom of a fish tank for this card in 1950. It features a winged male figure standing between the remaining columns of the Temple of Vespasian in the Roman Forum, a model made by McBean, accurate right down to the inscription ‘[R]ESTITVER[UNT] (they restored)’.

Other cards share a water theme in which he appears often as Neptune, and on other occasions he becomes a swim-suited beach photographer in 1951 in the classic British naughty seaside resort postcard tradition, or as the Edwardian dandy of 1956 promenading on the deck of the SS McBean.

1950’s card has his disembodied head grinning on a bleak staircase aside a mop and bucket.

It is often hard to determine in McBean’s imagery what is a small-scale model or a life-sized object, or a propped-up cut-out photographic print, lit when it was originally taken to imitate the lighting used for the surrounding imagery in the final shot. It is clear how accurate is his double exposure when you remember it is all done in the camera, re-exposing the dark-slide repeatedly behind his calibrated ground glass.

In the shots below the models pose in a hole cut into the table-top scattered around with sand and shells. The space is deceptive, not much more than the depth of an ordinary table, behind which is a cloud-painted backdrop, the graduated ‘sky’ light emanates from beneath the table.  So tight is the space that framing must vary to fit different statures of his models. 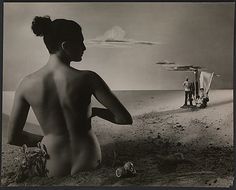 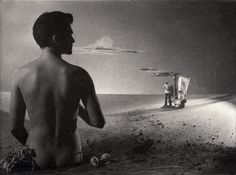 There is an autobiographical narrative can be detected in these two 1949 cards with their male and female versions, and in others. In 1942 his reputation and his career faced ruin when he was arrested in Bath for criminal acts of homosexuality and sentenced to four years in prison.

He was a close friend of the notorious ‘Naked Civil Servant’, Quentin Crisp, of whom he made several portraits (below). Released in the autumn of 1944, McBean was uncertain about his ability to successfully resume his career, and he lost confidence.

In 1945 McBean set up a new studio in a bomb-damaged building in Endell Street, Covent Garden in the midst of the theatre district. Exchanging his his Soho camera for £35 for a new half-plate Kodak View monorail camera which could accept his Zeiss lenses, he was ready for his first postwar commission, from Stratford Memorial Theatre to photograph a production of Anthony and Cleopatra. His former clients quickly returned and the theatrical community welcomed him back. In numbers of his later cards McBean poses inside cages and various other forms of entrapment, locked behind the frosted wrought iron gates of his Norfolk home or here, a prisoner of time behind a dramatically foot-lit clock face. 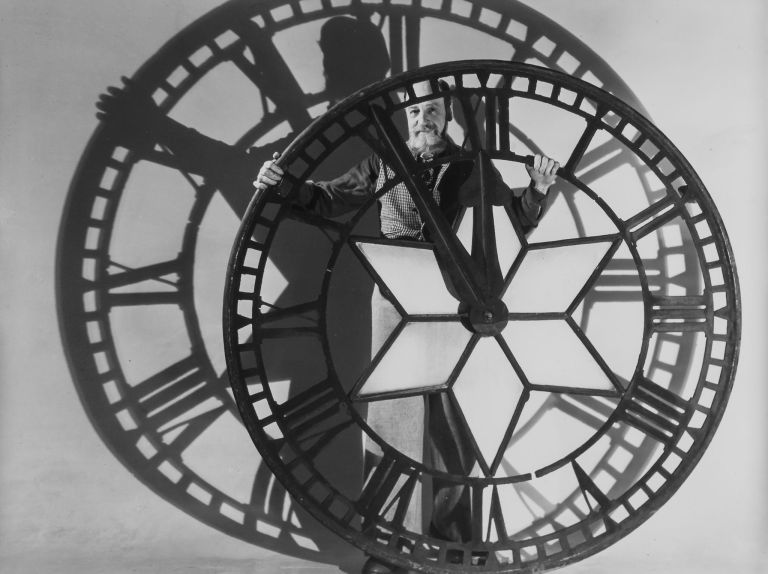