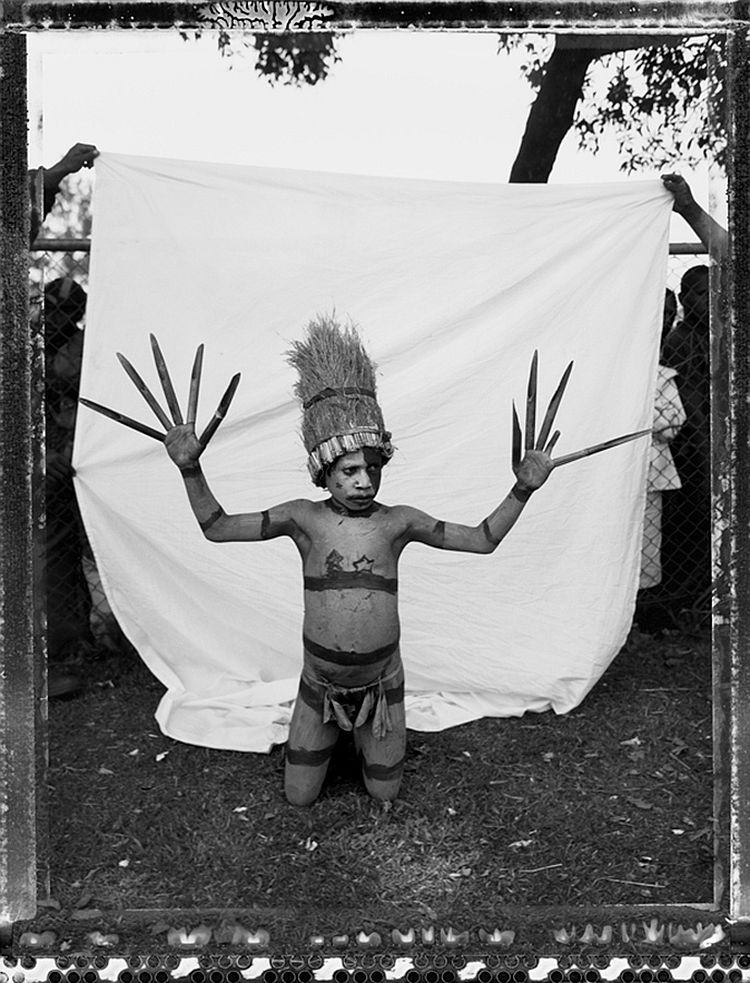 December 20: It’s crazy, this time of year, but you have to laugh…and you can do that at the relatively new Black Eye Gallery in Sydney at 3/138 Darlinghurst Rd, Darlinghurst. The gallery is the brainchild of Sydneyite Tom Evangelidis who made his debut as a fashion photographer in London in the early 1990’s before returning to Sydney to work in the television and theatre industries. Unlike many others Black Eye is bravely staying open till the death knell of Xmas (if you see it as I do), 24 December, along with Stills Gallery (closing 23rd). After that all goes quiet in the Australian photography gallery scene until mid-late January.

Go there and have a laugh as you see the history of modern photography flash before your eyes (well, there’s some available light; its not all strobe). Funny? Well yes it is, despite the fact that photography takes itself so very seriously (we have to; no-one else does!). No time? No excuse; you can see it online.

Sandro Miller, born 1958, set eyes on pictures by Irving Penn and felt the call of the shutter. It was the greats of photography who taught him, through the few photography books available to a young shutterbug back then in the early 80s. The rest he did by himself, learning to compose and to light, and with the application of shovel-loads of hutzpah. Now as one of Chicago’s top commercial photographers he numbers amongst his clients American Express, BMW, Dove, Gatorade, Coca-Cola, Honda, Pepsi, Milk, Nikon, Microsoft, Motorola, Nike, Adidas, Pony, UPS, and the US Army. The commercial success has enabled him to venture into a number of private projects, which have done equally well in the art photography scene.

His first followed directly on from Irving Penn. You remember Penn’s portraits of bikers?

In 1967, Penn approached the editors of Look magazine with an idea for a photo essay which the editors accepted; photographing the counterculture of San Francisco, including the Hell’s Angels motorcycle club, hippie families, and two up-and-coming rock bands. To make a studio large enough, Penn made the studio floor and seamless backdrop, which is usually draped paper, out of concrete:

I rented space on the second floor of a vast barn of a building in Sausalito where the beams were strong enough to support the heavy concrete sweep that we built of two-by-fours, chicken wire, and mortar – concrete thick enough to support the heaviest motorbikes of the Hell’s Angels. There was a large freight elevator for the bikes. The exposure was toward the north, as wished [the natural north light that Penn favoured for all of his ‘ethnographic’ portraits]

With that solution he created a neutral space which removed his subjects from their habitats and that also could support the weight of their motorcycles. 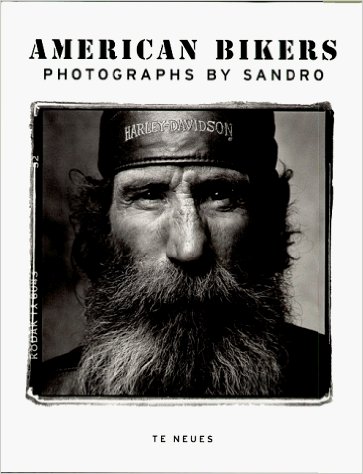 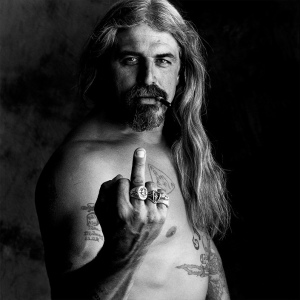 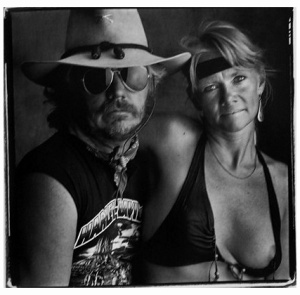 Sandro Miller began taking pictures of bikers in 1989. Then in 1990 visited the Sturgis Rally and Races in Sturgis, South Dakota, a motorcycle rally held every August. Amongst the three hundred thousand people showing up at the rally he made portraits of approximately a hundred and seventy. Clearly the model for this on-locaton portraiture was another hero, Richard Avedon, who not long before, from 1979 to 1985, on a commission from the Amon Carter Museum of American Art, produced the show and book In the American West. 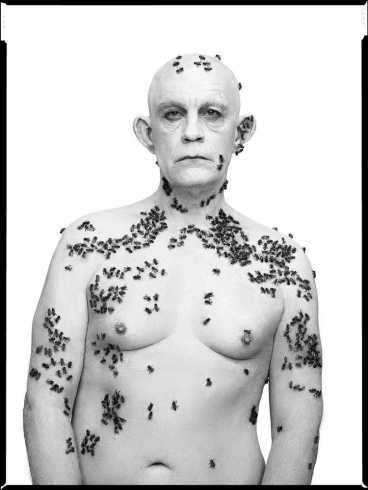 Miller is a shameless imitator; that’s how he learned his craft after all, and in that there’s a lesson for all of us. Imitation is the sincerest, and most effective, form of learning (just ask any Renaissance Old Master, or Sandro Miller). The project was driven by a more noble impulse; homage. This is what countless photography students across the world (my own included) were asked to do during the nineties when appropriation was all the rage; copy the work of another, better known photographer (or painter) down to the smallest detail, but with a twist. But Miller had another, more urgent and personal motive; in remission from cancer, he was looking for a project to celebrate.

Inspired by what he thought was a striking resemblance between his friend John Malkovich and Truman Capote, he decided he would like to pay his homage to Irving Penn’s portrait of Capote by using Malkovich as the model, whom Miller has known for 17 years.

I had been working with Steppenwolf Theatre creating their banners, playbills and advertising camplaigns and John needed to come in to have his portrait taken for a play he was in and we just hit it off and I remember creating these extremely powerful black-and-white portraits of John; he was so flexible and versatile. He gave me so much as we were working together. He doesn’t have just one look- his range of emotions is so wide and he was able to go there for me.

Such was his gratitude to those who taught him photography that he decided to go on and replicate them all; the greats, whom he knew by proxy, whose images that even now he would linger over wherever he saw them reproduced, images that he not only admired, but held in reverence.

He undertook a year of research, tracking down the technical details of each photograph so that he could reproduce them accurately. Malkovich proved himself able to turn himself miraculously, and convincingly, into any of the varied subjects of the originals, young or old, even female, including Dorothea Lange’s Migrant Mother, and Diane Arbus’s twin girls.

The real credit, though, goes to Miller’s direction and impeccable staging in creating these replicas. Though Miller might have taken the shortcut of photoshopping the images, his only adjustment was to duplicate the grain of 35mm originals in the series. He freely acknowledges the help of his team, including designers and stylists Leslie Pace and Randy Wilder, and his print studio JS Graphics, but only a photographer would comprehend and then be able to duplicate the ingredients used to make these classics.

There is more to these copycat images; Miller’s homage refers also to Spike Jonze’s millennial postmodern film Being John Malkovich (1999) in which Malkovich (playing himself) slips through a wormhole into a nightmare landscape of multiplied Malkoviches; everyone is Malkovich. The menu in the restaurant scene is filled with his name and the dialogue is nothing but the repeated word “Malkovich”. Likewise these still images, in their carefully crafted replication, become uncanny, particularly the Lange which crosses a gender line in which Malkovich remains male, older, and recognisably well-known, yet at the same time female and destitute. Miller takes the copying only so far, leaving in just enough jarring detail of his model, his hairy arms for instance, to capitalise on a head-swivelling double-take. 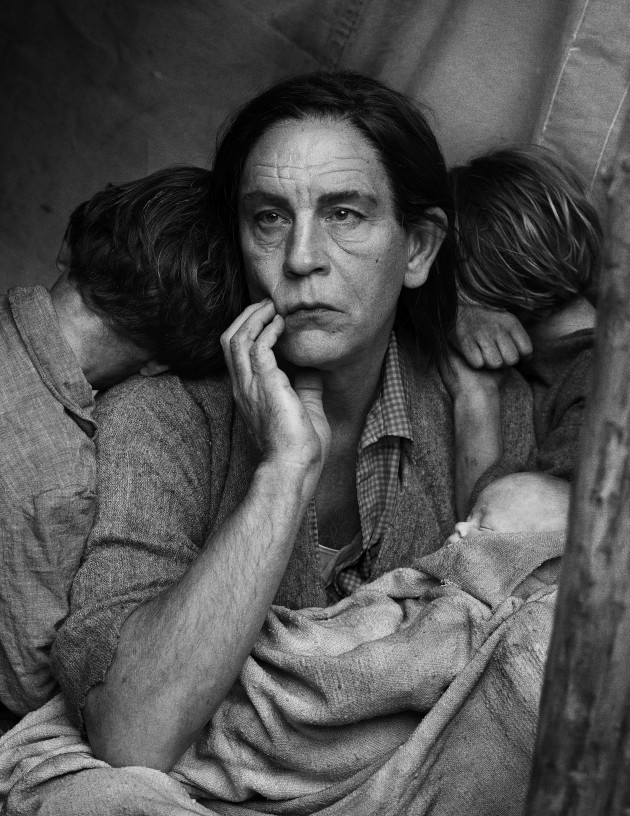 So go on; see if you can recognise the Old Masters (and some not so old) of modernist photography when you visit the Black Eye Gallery website.

The show is itself a Christmas doubletake of the exhibition held at Black Eye back in 2015 from 28 Apr – 17 May. Good for a laugh?

In Sydney there’s another show remaining open, but only until 23 December in this case. Stills Gallery is showing Australian photographer Stephen Dupont’s White Sheet Series gleaned from several years of his photojournalism in some of the world’s hot spots and featuring a great diversity of people including Saddhu spiritual men in India, remote Papua New Guineans, school kids in Cuba, and young women dressed up for the races at Royal Randwick in Sydney. This white sheet, like Penn’s, is the backdrop favoured by colonialist anthropologists. And like Irving Penn, who on his assignments for Vogue used makeshift studios for his records of the indigenous fashion of gypsies, Peruvians or people of the Cameroons, Dupont has also improvised; his ‘studio’ is the most basic white backdrop, a white sheet held up behind his subjects by their companions. 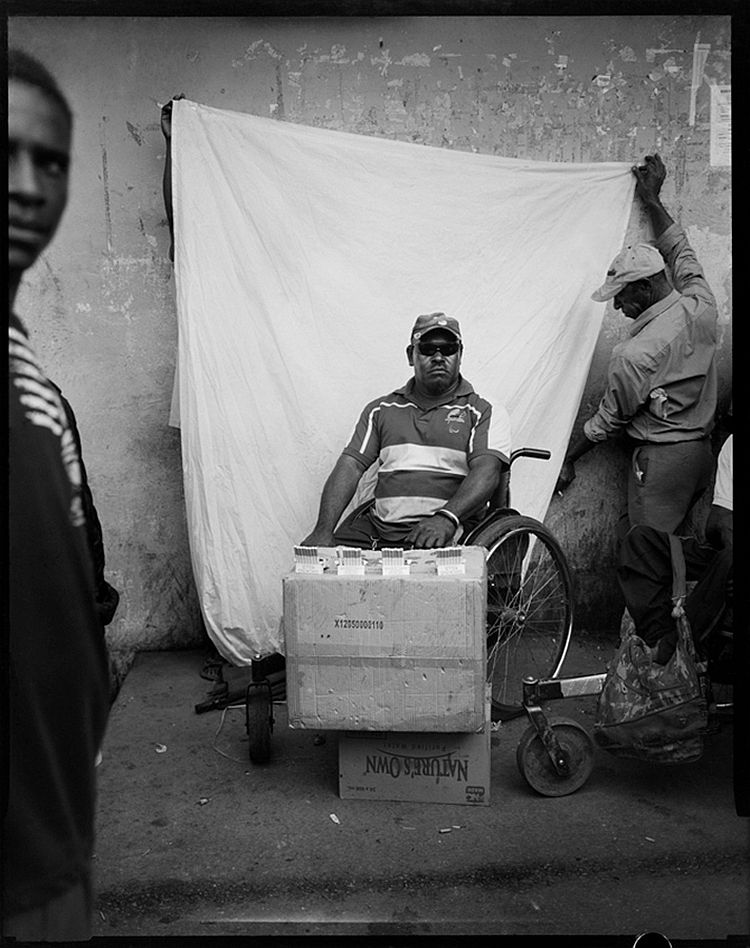 Like a negative version of the curtain used to cover precious paintings in the interiors of Dutch households in the 1600s, the white sheet reveals the subject, picks them out while simultaneously revealing their environment and glimpses of their social relations. 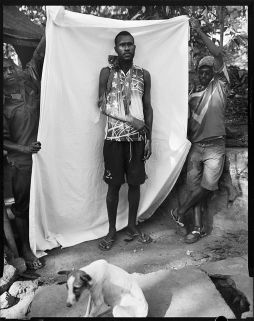 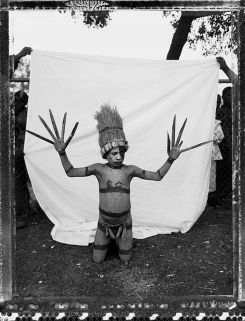 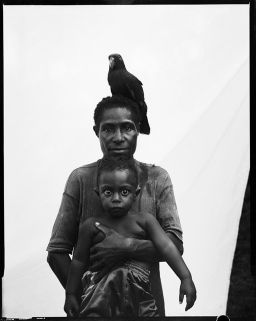 Behind these images is Dupont’s relationship with the documentary work for which he is well recognised; in 2007 he received  of the W. Eugene Smith Grant for Humanistic Photography for his ongoing project on Afghanistan; in 2010 he received the Gardner Fellowship at Harvard’s Peabody Museum of Archaeology & Ethnology; and he has twice been an official war artist for the Australian War Memorial with commissions in the Solomon Islands (2013) and Afghanistan (2012).

The device of the hand-held backdrop derived from Dupont’s experience of being asked to take pictures by soldiers and civilians in Afghanistan. In March 2006, in Kabul at the end of shooting a documentary film about heroin addiction, Dupont, exhausted, was struggling for a worthwhile photographic project. Having brought along ten packs of pos/neg Polaroid sheets he responded to the constant refrain ‘Axe Me Biggie’ – a crude Anglo phonetic rendering of the Dari for ‘Mister, take my picture!’ – by setting up on the street with camera and bucket of sodium sulphate solution needed to archivally process the Polaroid negs (the positives being given away to his subjects).

At the central bus station there were local street photographers. Borrowing a photographer’s backdrop Dupont set up alongside them, attracting such a crowd that the Chief of Police was afraid it would attract suicide bombers, so he kept the session on the move dragging along with him the hundreds of spectators. In the hectic conditions he gave up trying to keep the crowds back and out of frame, but gave up when it became obvious that the many portraits he was making were enlivened by leaving the crowds around the backdrop in:

It was spontaneous and fun and honest. For so many years I have been capturing the ugliness of war and its effects on the people of Afghanistan. I felt like I was giving something back to the people, and I don’t just mean a Polaroid either, I felt that I was giving them all a sense of dignity and pride and hope maybe. This is what I see now in the faces staring back at me, a human experience, a moment in time, the subject and the photographer – a mutual trust and acceptance, a collaboration, a little bit of History.