December 17: A show New Enter Image by Swedish artist Miriam Bäckström is opening today at Galería Elba Benítez, San Lorenzo 11 28004 Madrid, and will consist of large-scale, abstract woven images that combine photography, textiles, architecture and landscape. What are we to expect of this exhibition by this prominent, widely respected Swedish artist?

Miriam Bäckström, born Stockholm 1967, emerged as a conceptual photographer in the 1990’s, best known for her images of empty interiors which tell a story in the absence of the individual. These deserted spaces include intrusions into the houses of the deceased (Estate of a Deceased Person 1992-1996), depictions of cliché cosiness in uninhabited IKEA showrooms (IKEA through the Ages 1999), deserted private living spaces in Apartments (2000), faux rooms constructed for dramatic action (Set Constructions, 1995-2000), and the diurnal passage of light through an interior in which Bäckström responded with 29 Variations of Light (2002) to Carsten Höller’s sound piece made in empty spaces, in their collaboration for the 2005 Venice Biennial.

More recently her work quite frighteningly merges the documentary and fictional that derive from photography in narrative interweavings that verge on the schizophrenic.

Weaving is key to her approach materially and figuratively.

For recent work she has commissioned on-demand custom printing of tapestries in silk which can accurately and minutely reproduce digital images. The way the technology is used for reproductions of historic tapestries, banners and hangings is attractive to Bäckström for the way that the machine-printed results, based on the painstakingly hand-crafted originals, are inevitably kitsch and so patently bogus.

Her 2012 Smile as if we have already won, exhibited at the 2013 Artes Mundi exhibition at the National Museum of Wales, Cardiff, gives the appearance, in photographs, of being a photograph of harsh light sources and their spectral reflections; in fact it is a tapestry of a photograph. Bäckström asserts that photography has no surface, that we just ‘fall into’ the image, but never discuss the surface, which dissolves, is transparent. Her solution is the tapestry in which the viewer can see both the textile detail and the photographic whole, but only by interacting with it by stepping close and away,  by walking around to see the back of the work…

…to which they are given access and which provides a muted, but more legible, view of the subjects of the original photographs; figures of women covered in fragments of mirrors, each reflecting the others.

The title of the work refers to a social strategy for pretending that all is well, of presenting a brave face as a public persona. It references a mirror world in which each figure acts only in relation to, and their existence merely a reflection of, the others. We are enmeshed in a world in which truth and deception become a serious game. 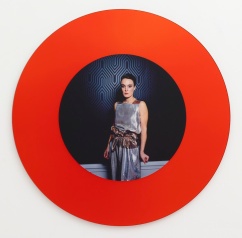 Miriam Bäckström, The Opposite of Me Is I, 2012 Glass mirror with laminate. Cibachrome on glass mirror: d 120 cm

Each of these draws on her experiments with interpersonal relationships with the actress Rebecka Hemse (above, right, best known for her role as Martin Beck’s daughter Inger). Bäckström’s Rebecka, 2004 centres on an uncomfortable video interview performed by  Hemse which compellingly presents socially conditioned subjectivity and superficiality, and The Viewer (2005) a feature-length film, complicates matters even more with interwoven subtitles, voiceovers, dialogues and monologues, pairing Rebecka with her actor colleague Tomas Pontén in a take on talk therapy.

The psychological domain is what intrigues the artist and drives her work. A 2007 project takes these experiments to an extreme where Miriam Bäckström decided to collaborate with a younger artist, Kira Carpelan, who was then in her penultimate year at Stockholm’s Konstfack Art Academy; “Over a period of a year I was documenting her trying to deal with the feeling that she was either using me or at least taking advantage of the situation. I had told her, that she could do whatever she wanted and that I would support it all both financially and with my works, contacts and name.”

Carpelan was making a film where Bäckström was the director, but also acted as herself acting as Carpelan.

When Kira put me in her film, I thought it was a perfect move for the project, and for my own film. I became an image depicting Miriam Bäckström and, possibly, Kira Carpelan

From being The Artist, Bäckström’s colleague, Carpelan decided to go into the role of The Trainee:

At the end of the project [Carpelan] defined herself as The Victim and me as The Perpetrator. I found it to be so interesting, that if someone defines himself as The Victim we immediately start to look for The Perpetrator and even if there’s no one or it’s just a construction, we will find it because someone has to take this role. There’s always two opposite characters in a situation and all of a  sudden they can swap.

This Pygmalion-esque ménage has a manipulative, reality-TV quality and significantly was contemporary with the emergence of popular web series Lonelygirl15. Carpelan professes that she didn’t know why her collaborator wanted to make this documentary but that Bäckström had “expressed a will to do something provocative or dangerous.”

Hers is a history that leads to high expectations for New Enter Image, and it is a reminder of the power of the photographic image, whether a conventional still, moving image or 3D surround, presented as a series or in a book. This is a medium that is attached umbilically to the real world and to the world of appearances; appearances, which in creating them or receiving them, are the stuff of psychology, what we make of each other.