December 12: Collaboration between painters and photographers have sometimes been made formative advances in art.

French artist and photographer Julien Vallou de Villeneuve was born on this date in 1795, and may be credited as a collaborator of at least one painter, based on the market for his photographs intended as source material for artists.

Vallou reportedly took up photography in 1842, a mere three years after its advent, but may have been using photography earlier and not acknowledging authorship because the lifelike detail of photographs depicting naked women, compared to those in academic paintings, were considered disturbing and improper. Photographers had to register their images with the police to have them accepted as ‘artists’ models’.

By 1850 de Villeneuve had opened a photographic studio at 18 Rue Bleue, Paris, from which he issued a series of nude studies as Etudes d’apres nature, and many were published in La Lumiere, journal of the Society Francaise de la Photographie. He also found a steady market for his photographs of well-known actors in full costume posing against theatrical scenery.

In researching Vallou in order to expand an entry on Wikipedia, I’ve found it difficult to find much information on his photographic technique, though it is known that since de Villeneuve took up photography not long after its invention, he  progressed from daguerreotypes to a predominant use of softly toned salted paper prints from paper negatives.

The medium of photography on paper enabled multiple prints to be made, unlike the daguerreotype, and it also accommodated the retouching he employed for artistic effect. 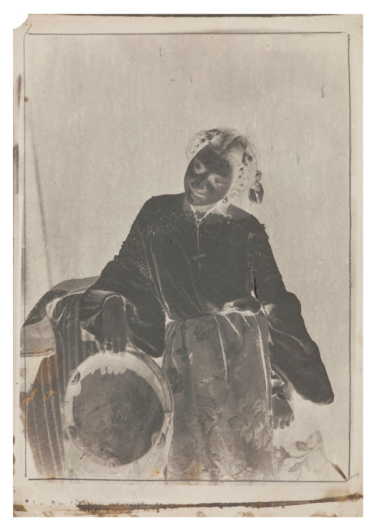 Following the method of Humbert de Molard, he fixed his prints with ammonia to avoid the bleaching of highlights caused in salt prints by the hypo (sodium thiosulphate) that was so reluctantly taken up by Henry Fox Talbot.

As can be seen in the negatives above, even in direct sunlight with hard shadows, the white chemise that the young woman is wearing retains detail. The skin tones in his figure studies are darker than those in others’ imagery, particularly that of the daguerreotypsts, resulting in a tanned, fleshy appearance in models who are already voluptuous. 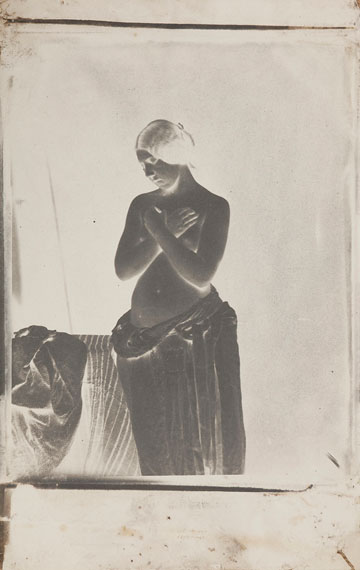 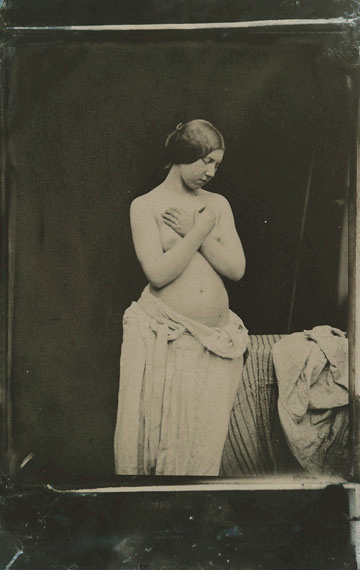 Where needed, tones in paper negatives could be lightened by lightly applying graphite, or bleached to darken them, before printing.

He had many of his prints made by photolithographer Rose-Joseph Lemercier (1803–1887), who with experience in lithography would have the advanced skills needed to apply in such an adjustment, and Vallou himself was an expert artist and draughtsman.

The work he exhibited there was Les Baigneuses. It was criticised by painter Eugène Delacroix, a member of the Salon jury (and who also worked from photographs), for “the vulgarity of the forms,” and indeed these are ordinary women bathing in a pool in the forest. The model used for the standing figure has been identified as Henriette Bonnion, who also posed for de Villeneuve.

Sufficient evidence from witnesses and in correspondence confirms that Courbet purchased de Villeneuve’s photographs so the similarity between the painting and the photograph is not coincidental, and neither is the treatment of the female subjects as very real, rather than an ideal. The amphora shapes of both bodies are filled in with the detail of flesh that yields to the motion of the figure with puckers, dimples and folds. In Vallou’s photograph his model’s shoes are clearly visible beside her dusty feet, and the drapery which she reaches for is her hanging skirts, fabric with an everyday purpose, not a decorative swag held aloft by putti.

These profane details can be found echoed in the Courbet painting. The clothing of the woman on the right is that of a peasant who is in the process of unglamorously removing her socks as she reclines amongst the other’s discarded crinolines and straw hat.

That much of Courbet’s inspiration for his realism derives from photography can be confirmed by comparing his La Femme au perroquet with Vallou’s reclining figure above.

Again there is not an exact correspondence of pose (and the figures lie in reverse directions), but the sense that this is a moment of sensuous relaxation in a real woman’s life links both.

The most often mentioned case of connection of Vallou’s photography and a painting by Courbet is  L’Atelier du peintre. Allégorie réelle déterminant une phase de sept années de ma vie artistique et morale…a ‘real allegory’ which he painted in 1855. Refused for ‘L’Exposition Universelle’ he exhibited it himself at his ‘Pavilion of Realism’. It is the similarity of the model in this work with one of Vallou’s photographic subjects that photography historian Aaron Scharf points out in his seminal Art and Photography. 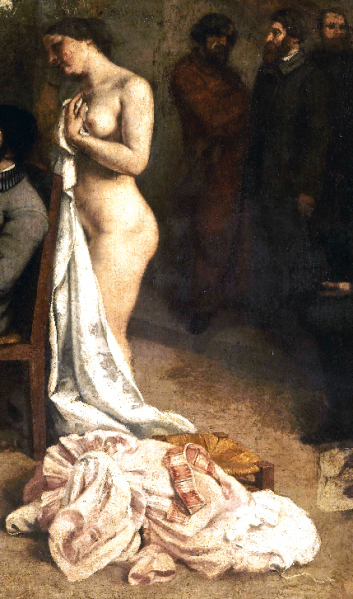 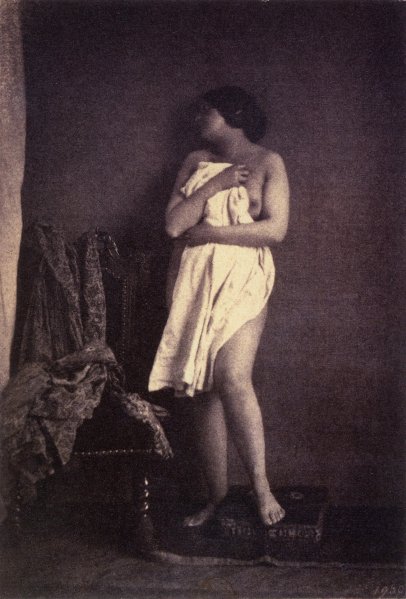 Again we are made conscious of the reality that this is an artist’s model, a person who has discarded her clothes to pose for payment; in both the photograph and the painting, there they are, heaped beside the model, undisguised. The poses are not exact copies, but the model in Courbet’s work clutches the cloth to herself in the manner of a life model between poses might do, with a sense of modesty, or for warmth. The gesture in the photograph is the same. It is the gesture a real woman might adopt, but at the same time the male gaze is tantalised by her nakedness behind that cloth. Allegorically, in the painting, she may stand for Honesty or Truth, or as some believe, she may even represent the vanity of the Academy.

Gustave Courbet and Julien Vallou de Villeneuve share a new interest in representing her as real in both person and presence. While there is as yet no way of telling if the photograph was made before or after the painting, for my part I support an argument that the inspiration for such awareness and interest comes from photography, and from this particular photographer who, though he also makes a living with portraits of actors in roles as someone else, does not conceal the faces and the physicality and individual identity of his female subjects.