December 7: The pinhole camera is often called the ‘first camera’. This is true in a sense; early natural philosophers like Alhazen (965–1039) noticed the lensing effect of small apertures, particularly when during an eclipse the light patches cast amongst the shadows of foliage would gradually change their shape.

‘Pinhole’ effects are an everyday phenomenon. In a room with curtains closed but leaving a small gap we notice that images of passing cars or figures outside project moving, coloured shadows on the ceiling and side or opposite wall, as can be seen in this recent image by Lithuanian artist Darius Kuzmickas, who like Abelardo Morell (who prefers a lens) takes advantage of the effect by recording the projected scene with a camera placed beside a large ‘pinhole’ on the covered window and aimed back into the room…

…of which he says;

Each room became pinhole camera of its own, leaking an inverted image onto the walls and furniture from a small hole on the window. This series of photographs captures the loneliness of an inhabited space, while being flooded with…the outside world. The city projections on the walls are overwhelming, dreamy, and powerful, to the point of seeming almost unbearable…[and]…play with the mind’s eye and understanding of our optical reality. The city projections combine the seclusion of a personal room with the rawness of the outside world, which is frequently perceived as separate part of our lives.

But a pinhole could certainly not be used with early photographic processes, given that the light admitted is minuscule, requiring very sensitive materials to record any image projected. The earliest pinhole photographer is probably George Davison (1854 – 1930)  who used its inherent softness to make his Pictorialist images.

Even in the camera obscura, which artists used to trace a subject and which made the first cameras, only the largest ‘pinhole’ could be used in order to see anything at all in that dark box, and that would be in such soft focus as to be difficult to use in that application. A lens was the technology actually used in the camera obscura; there is mention of pinholes as optics only in the late 1700s and in relation to photography, not until 1857.

Photography students are often expected to make and use pinhole cameras in their first year as an introduction to the medium, but only the cleverest among them produce anything worthwhile and most never use it again. It takes a special understanding of the advanced complexities of photography to make something of this apparently most ‘simple’ of cameras.

In the right hands however, those of actually quite a number, the pinhole camera makes extraordinary images that transform ideas about photography.

It is Dutch photographer Corine Hörmann’s birthday (born 1968) today that has brought pinhole photography to this post and whose work she has been making with the pinhole came since the 1990s ably demonstrates the magic of the instrument.

Here in an early example from her series I am an Elf , she uses the infinite depth of field that the pinhole povides by placing her small camera box on the ground amongst the toadstools which become giant  canopies or umbrellas towering over the now elfin viewer, their forms repeated into the distance, apparently as tall as the house on the horizon. The shallower the camera in depth (or the closer the pinhole to the photosensitive surface), the wider the angle of view, which here is also used to full advantage. Since the film surface is flat, images from the edges of the field of view reach it at an angle, here distorting the foreground fungi caps, which are round, into quite exaggerated ellipses, enhancing the surreal effect. Creepers snake through these tree-like forms like cables. We are in a quite different world.

In this image from 2012 Hörmann has used an exposure of many hours to make an image that looks as if the print has been roughly scored. The line is in fact the Sun’s arc through the sky, broken wherever it has passed behind a cloud. In fact one might more truly say ‘whenever’, because this photograph is of a very long ‘moment’, encouraging the viewer to contemplate the fact of every photograph, no matter how ‘instant’ the exposure, as being always of a duration.

This was an accidental discovery, but aligns with the process used by Finn Tarja Trygg and her collaborators using pinhole cameras to document the differences in the path of the sun at different latitudes around the world. The duration of these exposures extend over months, recording the Sun’s increasing altitude as it follows its daily arc through the seasons.

Recently Hörmann has been concentrating her photography on the Wadden Sea close to Gronigen, the major city in the North of the Netherlands where she made the Test of Time series photograph above in which exposure times were from one and a half minutes to one whole week!

Here, with impeccable planning and preparation she has recorded the passage of the Sun (or is it the Moon?) directly overhead; it’s a puzzle, since I cannot imagine that even in Summer would the Sun be so high overhead at that latitude. If it is the Moon then additional daylight exposure may have been added to complete the detail the foreground sea mud. A clue emerges when one reads Hörmann’s informative website;

I developed a new technique to get the line in my images.I move the camera towards the sun after a two minute exposure. Its a different line which gives the images a different content.

However in this case Hörmann has contrived to have the streak of light appear to emerge from, or disappear into, a crack in the sea mud that meets it at the horizon, but this is at odds with the illumination of the mud crack itself which is clearly lit by a fixed point source from above. It is certainly ‘slow photography’ whatever the solution used, and this is the attraction for many, that the pinhole camera is ‘retro’, being best suited to analogue materials; pinhole photographers often use photographic paper which has an speed of around 12 ISO which is forgiving in terms of guessed exposures and which can be developed and viewed within minutes of taking a photograph. Hörmann has switched to film in recent years for its finer detail, using neutral density filters to extend the exposure.

Between the Wadden Sea and the North Sea is a string of islands acting as a barrier to violent wave action so the area comprises of shallow mud flats (wad meaning mud flat, from which English obliquely receives ‘wading’) which experience slow contesting tidal forces. Given its huge area of unbroken mudflats, the area is on the UNESCO World Heritage list. The contest between land and sea, dry and wet, over time is an ideal subject for pinhole photography.  In a photograph like Cast Away, below, one can sense the flow and suck of the waves, and over time, the tides, as they sculpt the ancient timbers of a seemingly infinite breakwater and deposit, then drag away, a mixed debris of sheep skulls and nautilus shells. Hörmann’s long exposures make these objects seem to both float above, and embed in, the rich deep mud. 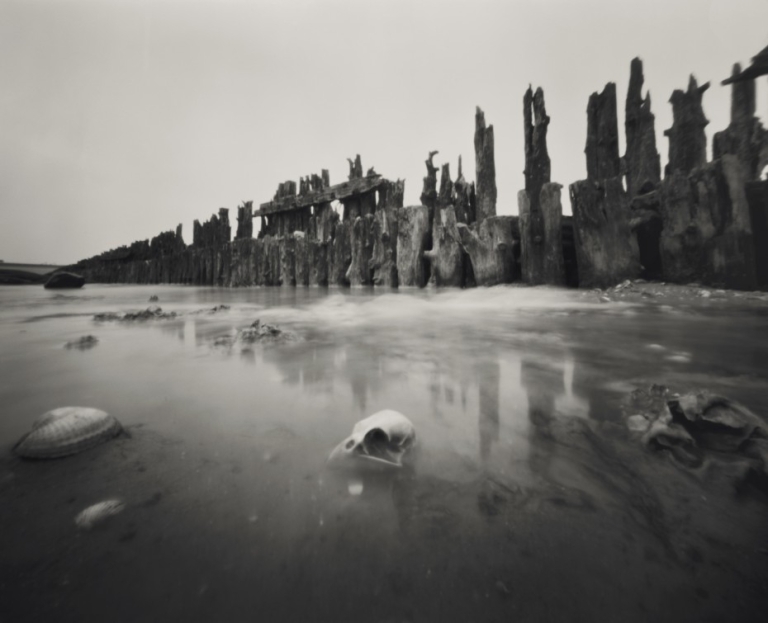 This is what moves Hörmann’s work beyond the ‘gimmick’, or in more respectable cases, the curio value, of the pinhole image. Her sustained effort with this complex offshoot of photography is appropriate to the ideas and feelings she wishes to convey. Even in the early I am an Elf one can detect her love of isolation. Out there on the mudflats it is clear that she loves the environment in which she has spent days alone. I empathise when she declares that she enjoys the melancholy of loneliness in that environment; its is the magnificent, quite addictive companionship one feels with the camera, the ‘objective’ eye, here the most primitive form, that requires you to show it what you see.

One thought on “December 7: Slow”