Though he was not a photographer, but a writer, a poet, and an intellectual, he is known for nineteen photographs reproduced in a small book, all made over the course of three months, from December 1929 to February 1930, with a simple amateur camera.

The work appeared in Surrealist journals, but was published as a book only much later, after his death in 1968. Only 230 copies were made.

In 1924, Nougé’s ‘Correspondances’ inaugurates the Belgian surrealist movement, alongside the painter, René Magritte. They  desire to distinguish themselves from the French Surrealist group. Paul Nougé

The title of the book is ambiguous; Subversion des Images, in French as in English, may mean either that images are subverted, or may themselves subvert.

In the photographs irrational or missing objects are indicated in a subversion or denial of the indexical nature of photographs that we take for granted, especially in snapshots. All are taken in an ordinary domestic interior, the domain of the snapshot that his actors inhabit it as if in the dreamlike, mesmerised state.

Here he writes about the Snapshot (‘L’instantané‘) in an undated, posthumously published poem:

The fine straight blade
too sharp
ah! truly plunges plunges
into the too solid white flesh.

Cold fecundity of the fine blade
beautiful flesh of certainties here his the fine blade
a little blood ebbs on the lips
the needle tears itself away from the dial
dives toward the North
a hand dances alone
the eye explodes from too many images.

However it is a presumption to treat these few photographs taken over a couple of months, the photographic entire output of Nougé, purely as pictures. The work of René Magritte (who appears second from right in Paul Nougé’s, The birth of the object, above), serves as parallel which may illuminate this contradiction. Like Nougé, Magritte approaches his medium methodically; his paintings are plainly made, like those of a sign-writer. Both had a same taste for bizarre titles that the photographer often invented for his friend the painter, given after Magritte’s paintings were made. With minimal painterly nuance or expression, they are the painted counterpart of the snapshot.

What Nougé subverts is documentation, the ‘representative real’, exposing it as all indexing, with no “thing itself.” The captions in the book read as instructions…His intent is undertake a methodical investigation in which it is apparent that the participants in his photographic have been instructed to: 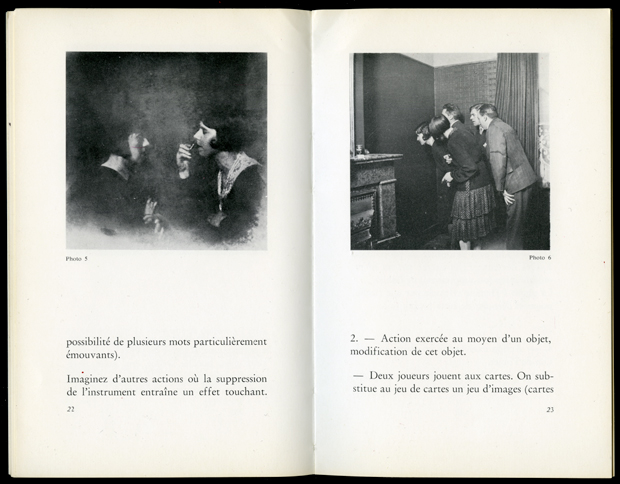 A comparison of one of his images with that of Magritte’s makes it clear that his strategy sidesteps any category of image-making, in a manner close to Fluxus’ intermedia, and like them, to centre on action and process. 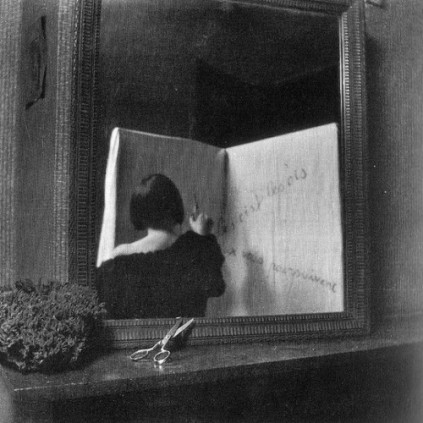 Publisher Mariën suggested in 1968 that Subversion of images led to Nougé’s theory of René Magritte’s paintings in his Les images défendues (1943).

On the back cover of the book, a coda, the index finger of a disembodied arm, returns us into the book…