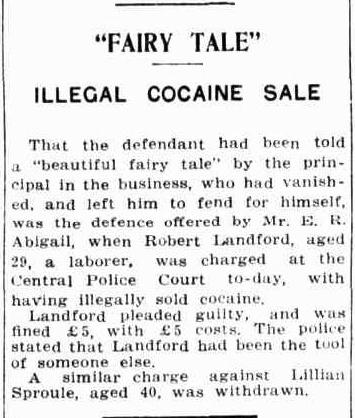 October 31: We’re looking at three mug shots which coincidentally are all of women, and all were taken in Sydney at Long Bay Gaol on this date October 31, and in the same year; 1928.

On the untrustworthiness of photography Susan Sontag asserts that “to photograph people is to violate them.” In the case of the mug shot; a photograph is taken of the criminal or the accused at the same time as their fingerprints are inked and printed onto a card to be filed with the image, but what the photograph does is to incriminate them, in the sense of marking them as criminals, as a form of elementary eye-for-an-eye justice.

The status of the fingerprint may throw light on the nature of the mug shot. To be fingerprinted is to be accused of, or at least implicated in, a crime. Part of the body is now owned by the State, preserved, ready to be brought out at any time to connect its hapless owner with a future crime.

And so it is with the mug shot, which like the fingerprint, is used to measure the subject against the ‘mean’,  and to classify the subject, literally, in the case of one of its proponents Alphonse Bertillon (1853 – 1914) the French police officer and biometrics expert who standardised and systematised the mug shot (especially the use of the profile and full-face frontal views).

The act of making the mugshot is intended to apply control by ‘arresting’ the subject through the technology of the lens, shutter and film. In this way, authority is able to wrest their anonymity, privacy and identity from them.

The photographs here are from the collection of the Justice and Police Museum which is  housed within the former Water Police Court (built 1856), Water Police Station (1858) and Police Court (1886) in Circular Quay, Sydney, in New South Wales, Australia. There are numbers of collections around the world holding mug shots from the 19th and early 20th centuries, but this one is  in my own country. The Justice & Police Museum has a collection which includes objects relating to crime, policing and legal history. Of interest here is the  extensive archive of 4.75 x 6.5 inch (12 x 16.7cm) glass plate mug shot negatives, known to the force as Special Photographs, produced in New South Wales prisons and police stations between 1912 and 1930. They are included amongst a hundred thousand negatives taken by NSW police photographers in the years between 1912 and the late 1960s, which were kept in the loft at the Museum where they had been since they were taken from a government warehouse in 1989.

Most of these mug shots have become separated from the documents that would provide more information on the people in them and their criminal history, but as most are outside living memory that information has to be sought elsewhere. However they contain intrinsic data in the form of an inscription in black ink on the emulsion side cleverly written backwards, so that the information prints white and legibly left-to-right, which accounts for the odd stylisation of the painstakingly orderly script. They give a name, a date, and sometimes coded fingerprint data .

In addition to the information supplied by the museum’s own researchers which I am examining here, it is possible to track the subjects to particular articles in newspapers kept in Trove, the online access to the collections of the National Library of Australia. Each of them has a human story.

Coincidentally, each of the subjects shown here is female and each of them came before the police camera on the date of this post, October 31, in 1928. It an be assumed that they hadonly recently been arrested and were yet to face trial. The photographer employs Bertillon’s system of recording full-face and profile views of the subject and incorporates a scale in a third, full-length shot from which can be read the subject’s height.

The first to stand before us is Lillian Sproule, criminal record number 746LB, 31 October 1928, photographed at the State Reformatory for Women, Long Bay, in Sydney. A Tasmanian, Lillian Sproule became involved in Sydney’s cocaine trade. Her date of birth is recorded as 1878, making her about fifty at the time she stood before the lens. Her body language is defiant, even belligerent, but her expression seems to be one of self-pity and resignation. 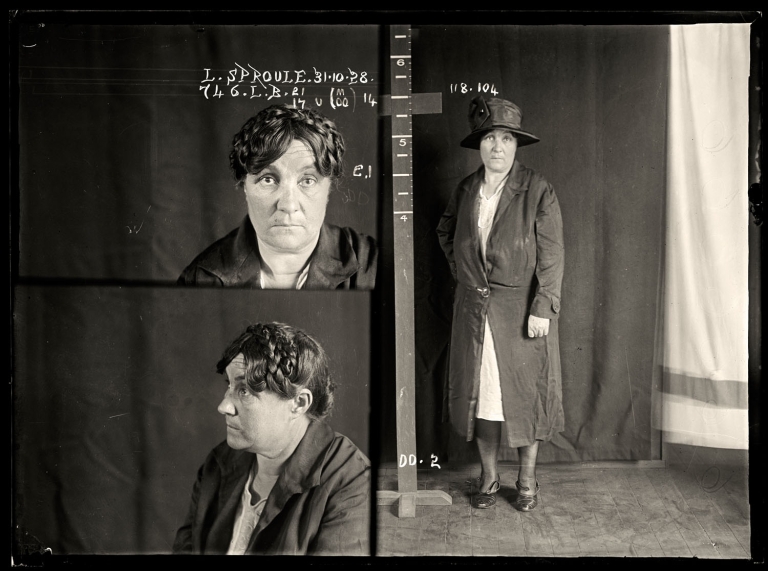 Her story can be read in a number of papers of the time, starting with two arrests in 1927, then two charges in 1928 and a final sentence of six months in jail. 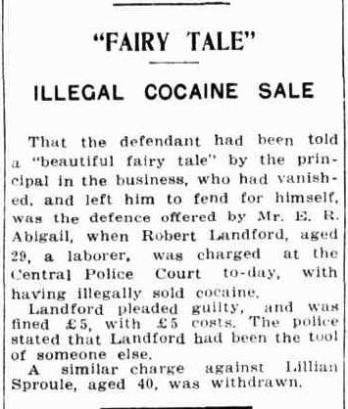 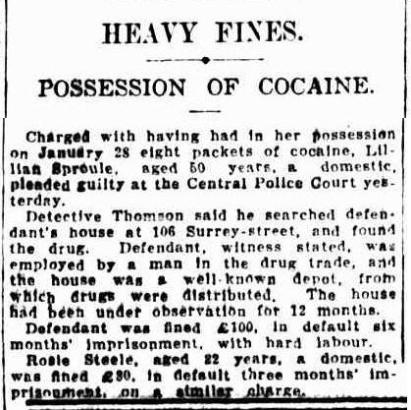 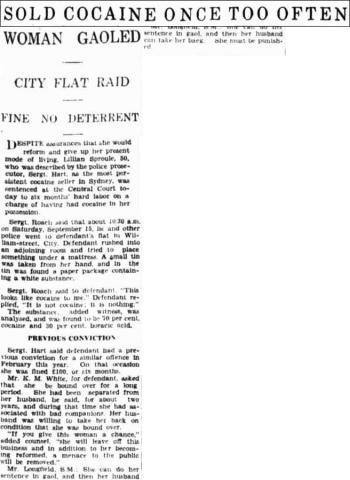 The following mug shot of Elsie Bowman, also taken 31 October 1928 in Long Bay Women’s Reformatory was the result of charges against her as a pickpocket, prostitute and thief. She was a close associate of John Brendon Parker, thief and notorious escapee and her name appears in the Perth, West Australia Truth for Sunday 17 February 1929 on page nine. The article reports that John Brendon Parker, a ‘celebrated Australian criminal’, had made a sensational escape from Darlinghurst Police Station leaving behind him a locked cell door, thirteen wooden faced accomplices to his gaol breaking feat, and slipped away into “smoke.” In August 1928, he pulled a gun on the detectives who had arrested him, but ‘he got no chance to use it chance to use it. An associate, Elsie Bowman, said “Never mind, Jack, we’ll get out on bail, and we’ll have a good time.”‘

Bowman’s MO as recorded in the NSW Criminal Register, 22 July 1938, includes
such details as:

“1. Sat down alongside a man on a seat in University Park, Sydney, at night, and stole a sum of money from his fob pocket. When the man discovered his loss and accused Bowman she handed the money to Alfred Thomas McGovern … by whom she was accompanied.

2. After having several drinks with a man whom she had picked up in a city street, stole 12 pounds from his pockets whilst pretending to feel his privates in the approved fashion of the lower type of prostitute,

and notes that she ‘is an associate of criminals and prostitutes generally, frequenting Newtown, Enmore and Darlington.'”

Her eyes in the full-face shot are boldly complicit with the photographer, while in the profile this expression seems to turn to haughty disdain. The overexposure erases unflattering detail in the skin and generates an angelic glow quite at odds with the story of this subject, who in her full-length portrait plants her feet firmly in the pose of a woman who could look after herself. 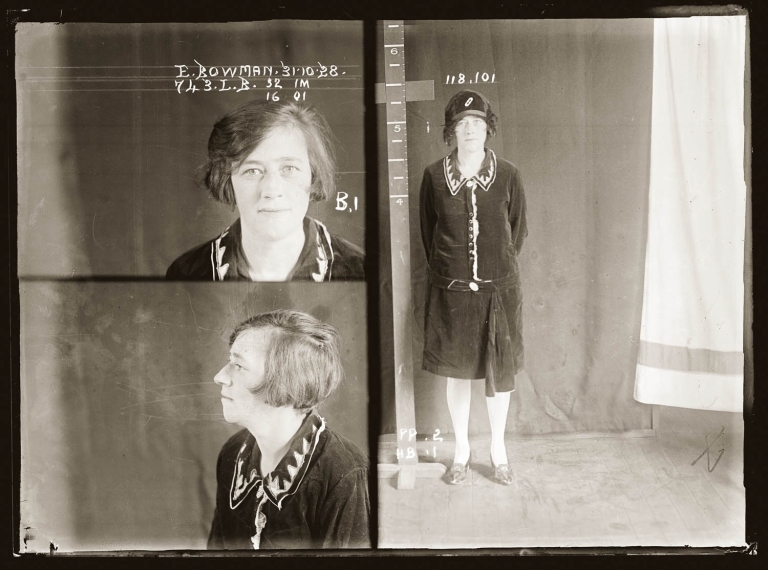 Another woman to pose for the police camera at State Reformatory for Women, Long Bay, is Pearl McFadden. Her year of birth is given as 1910; only 5 feet tall, she is a mere 17 or 18 years old. Sentenced to six months with hard labour, her crime may have been prostitution. In the full-length photograph she smiles obligingly in her shapeless cheap dress and laddered stockings, eager to comply with the photographer, but at close range her expression in the head shots is hang-dog, pleading and defensive, betraying a degree of fear, to which she is no stranger.

Two months before, a story broke in the Sydney Truth of Sunday 2 September 1928 on page fourteen where the headlines shout;

Plague-Spot In The City Is Revealed By Police-Court Prosecution

THE HOUSE OF SHAME AND DEGRADATION

and beneath these it reads:

AN appalling story of a house in Kippax Street where assignations were made between young white girls and Chinese, was told in the Central Police Court on Thursday. In the dock stood Mrs. Amy Miller, wife of a City Council employee, James Miller, working at the Bunnerong Power House. She was accused of having, between March 10 and 31, at 48 Kippax-street, allowed Eileen Stace — little more than a child — to stay in her house for immoral purposes.

Witnesses called by the prosecution are a three young women serving time in the State Reformatory for Women at Long Bay Gaol. Amongst these is “Agnes Pearl McFadden, who said she too had stayed at Mrs. Miller’s house and conducted herself in the same way as the previous witness.”

The madam, Amy Miller, was sentenced to three months hard labour for conducting these activities in her house, but her counsel pleaded that she was a ‘first offender’, so the Magistrate ordered Mrs. Miller to enter into a recognisance of £40 for twelve months. The witnesses were already serving much tougher sentences, in line with all the prejudices implicit in the Truth‘s report.
Dare we hope that a Family Notice in Melbourne’s The Age of Saturday 14th December 1929 which reads:

KNELL (nee Pearl McFadden).— On the 28th at Roxburgh-street, Preston, to Mr. and Mrs. Knell— a daughter (Pearlie),

might refer to the same person, perhaps now leading a happier life?

Close inspection of the photographs tells other stories about the daylight studio in which these women are photographed. The lighting waxes and wanes, resulting in considerable variation of exposure, while the same creases appear in the black material of the background and what may be a prison blanket crookedly hung as a reflector. On the floor beneath the womens’ feet, the scuffed boards bear the traces of a procession of wrongdoers. The camera never changes its position on its tripod, fixed as it is at a height level with the eyes of the average male prisoner. Consequently its judgemental glass eye  looks down on these women, victims of their own circumstances in jazz-age working-class Sydney.