October 27: an event on this day may mark the rudimentary beginning of ‘citizen photojournalism’.

We tend to think this phenomenon dates to twenty years ago, on March 3, 1991, when the Rodney King video was shot by a bystander with his home video camera as several Los Angeles police officers beat King repeatedly while other officers stood by and watched.

But what constitutes ‘citizen photojournalism‘? Is it dependent on video, or will even back and white still images taken by an amateur qualify? It is certainly not the medium which is the defining factor, but the spirit in which it is used; when the people who would normally be regarded as the audience employ the press tools they now have in their possession to inform one another, that’s citizen photojournalism.

On October 27, 1914, the dreadnought battleship HMS Audacious struck a German mine and sank quite quickly, resulting in one casualty who was struck 800 metres away by armour plate blown off the wreck as shifting munitions inside the capsizing vessel exploded.

The term ‘Dreadnought’ expressed the popular impression that this type of ship would fear nothing and be virtually invincible. Their development was rapid; the result of an early arms race which the British then thought they had won. The sinking of the most advanced of these fighting ships (launched only the year before in August) was an embarrassment. The fact that it sank whilst undertaking exercises along with the majority of the Grand Fleet,  on the West Coast (near Ireland) which was meant to be out of reach of German mine-laying was a further insult.

Most galling of all was that much of the event was witnessed by the passengers of the White Star liner Olympic, elder sister of the famous Titanic, who had an overview from the high decks of the mighty liner.

Many had cameras including one who had a movie camera. The Kodak Box Brownie and the more sophisticated folding models of Kodak cameras had appeared at the turn of the century, not to mention hundreds of other brands. Amateur movie cameras were available in formats ranging from 17.5mm up to 35mm.

The Commander-in-Chief of the Grand Fleet, Sir John Jellicoe,  immediately proposed that the sinking be kept a secret and took action to seize the passengers’ films. However many were Americans not under his jurisdiction; at that stage of the War their country was neutral. Board of Admiralty and the British Cabinet approved his censorship as did the Germans themselves after the war.

On November 28, 1914, however, Scientific American published an article The Loss of the “Audacious”: Mines, Laid on the Trade Routes, Sink a British Dreadnought analysing the sinking of the British battleship. It outlines how the incident may have occurred and the way the ship’s sharp turning manoeuvre exposed its middle section containing the three engine rooms to such extensive damage despite bulkheads designed to prevent catastrophic flooding. The article does not condemn the British for losing a ship but devotes a paragraph to Asquith’s statement deploring the ‘illegal’ setting of mines by the Germans (from a passenger vessel);

The menace to peaceful shipping presented by these wholly illegal methods of waging war is so great that the government has been compelled to adopt the only possible means of protection, namely, to declare the whole North Sea a military area, and to restrict all shipping crossing it to a narrow passage, along which the strictest supervision can be maintained.

The Germans are doing everything on a big scale in this war, and it would be like them to make their mines of the most deadly character. The destructive energy of a mine increases as the cube of its charge. A 500-pound mine would let loose within a ship a volume of gases at high pressure that might so wrench the whole internal structure in the neighbor­hood of the blow as to set up a slow leakage that would gradually, as in the case of the Audacious, destroy all her buoy­ancy. 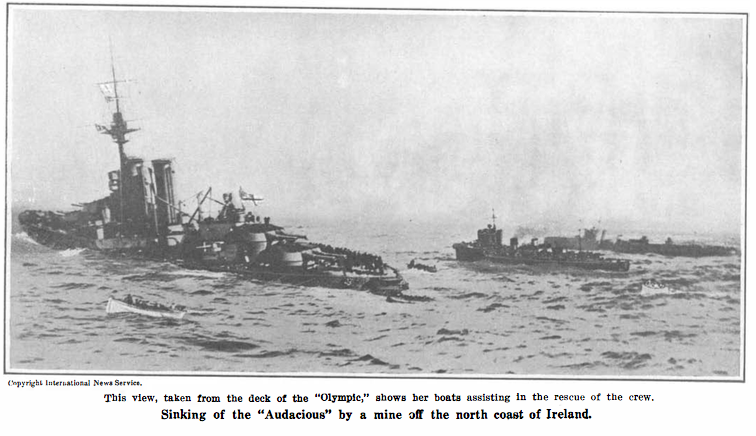 Amateur photograph of the sinking of the Audacious taken from the deck of the Olympic, illustrating Scientific American article.

It is the amateur photograph which is used to illustrate the article which provokes interest. Clearly Sir John Jellicoe’s attempt at censorship was a failure. Scientific American had a following and subscribers in the UK, and the article itself starts “A FEW weeks ago, and fully two weeks before the loss became known to the public, the British dread­nought Audacious, one of the four ships of the “King George V” class, struck a mine…”. (officially the loss of the ship was not admitted until the end of the War, and a civilian ship was disguised as the lost warship to deceive the Germans).

That this amateur photograph is used in a mainstream journal is significant; no reporter or news photographer was present, and yet here was a picture recording the event, graphically conveying the circumstances and the scale of the loss from a neutral viewpoint, and yet close enough to present the dangers to which survivors were exposed. Twitter or Instagram did not exist; these being the platforms which we have come to regard as essential to ‘citizen photojournalism’. Clearly it is the content of the image which carries it into the mainstream, then as now.

Another example are these rare photos also by an amateur, taken on board a ship after it had been torpedoed. The Sussex passenger steamship, carrying 380 persons, was struck by a German torpedo at 2:50 pm on March 24, 1916, while steaming along its normal Channel route from England to France. The explosion cut the ship in half, blowing off the bow and killing all First Class passengers who were in the dining room in that portion of the ship. Others died jumping into the water where they drowned. Miraculously the watertight stern of the ship remained afloat and passengers climbed back on. They drifted 20 miles over nine hours toward the coast of France where a French trawler finally came to the rescue. In all, fifty died.

International controversy soon erupted as the German government denied responsibility. U-Boat attacks roused the conscience of the American public, particularly the May 7, 1915 sinking of the Lusitania. The Sussex incident and its publicity was thus partly responsible for America’s joining the war in 1917 as an ally to Britain, the more so because these amateur photographs were printed in newspapers in France and the USA.

These amateur pictures are subjective, authentic, not remote records made from the safety of another ship, and they put the audience in the position of witnesses to the event, placing them amongst the distressed families on board to imagine how they might respond had they been physically present themselves.

The citizen photojournalist responds to an event with the impulse to take pictures, rarely out of any desire for monetary gain, or because it is their job, but because they are there, emotionally and physically embroiled in an extraordinary situation. The desire to take the photograph is a human reaction; an often audacious desire to reach others.